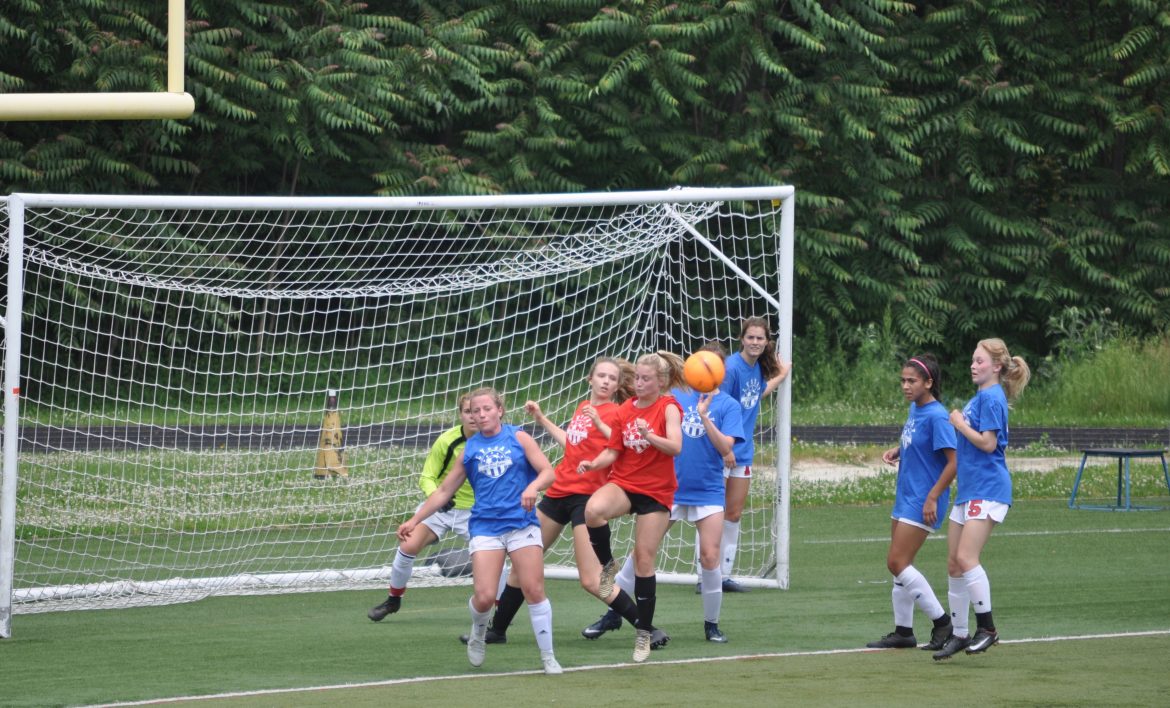 The Colonial League (red) trying to take advantage of a loose ball in front of the EPC goal.

Five Saucon Valley seniors and a Panther soccer coach were selected to represent the Colonial League and participate in this year’s LVSSAF All-Star Classic against some of the best senior players who made their home in the East Penn Conference. Last Sunday, boys and girls teams from each league squared off in an afternoon of soccer competition on the turf at Salisbury High School.

In addition to rounding up volunteers and making Sunday’s game possible for the Colonial League and EPC senior All-Stars, the mission of the LVSSAF (Lehigh Valley Soccer Scholar Athlete Foundation) is to honor the top high school male and female soccer scholar-athlete each year with a banquet held in January.  Every year, the Foundation raises funds to provide a couple of $1,000 scholarships to a boy and a girl who excel both academically in the classroom and athletically on the soccer field. 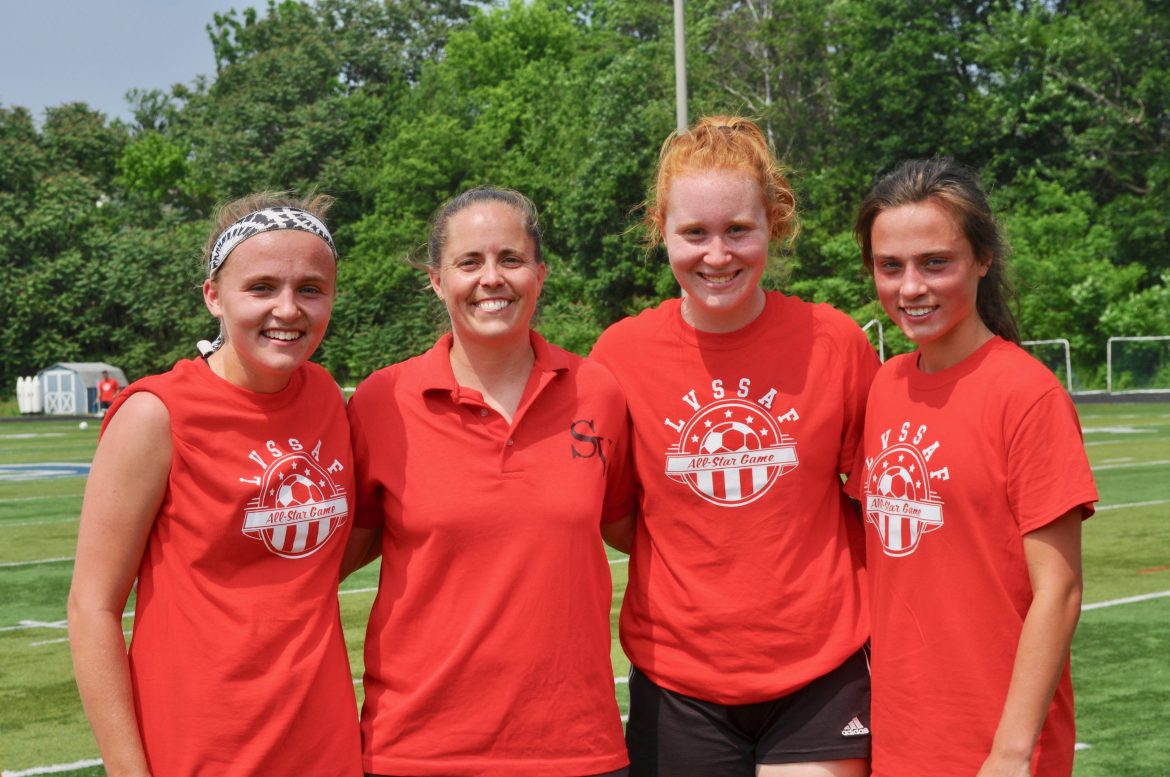 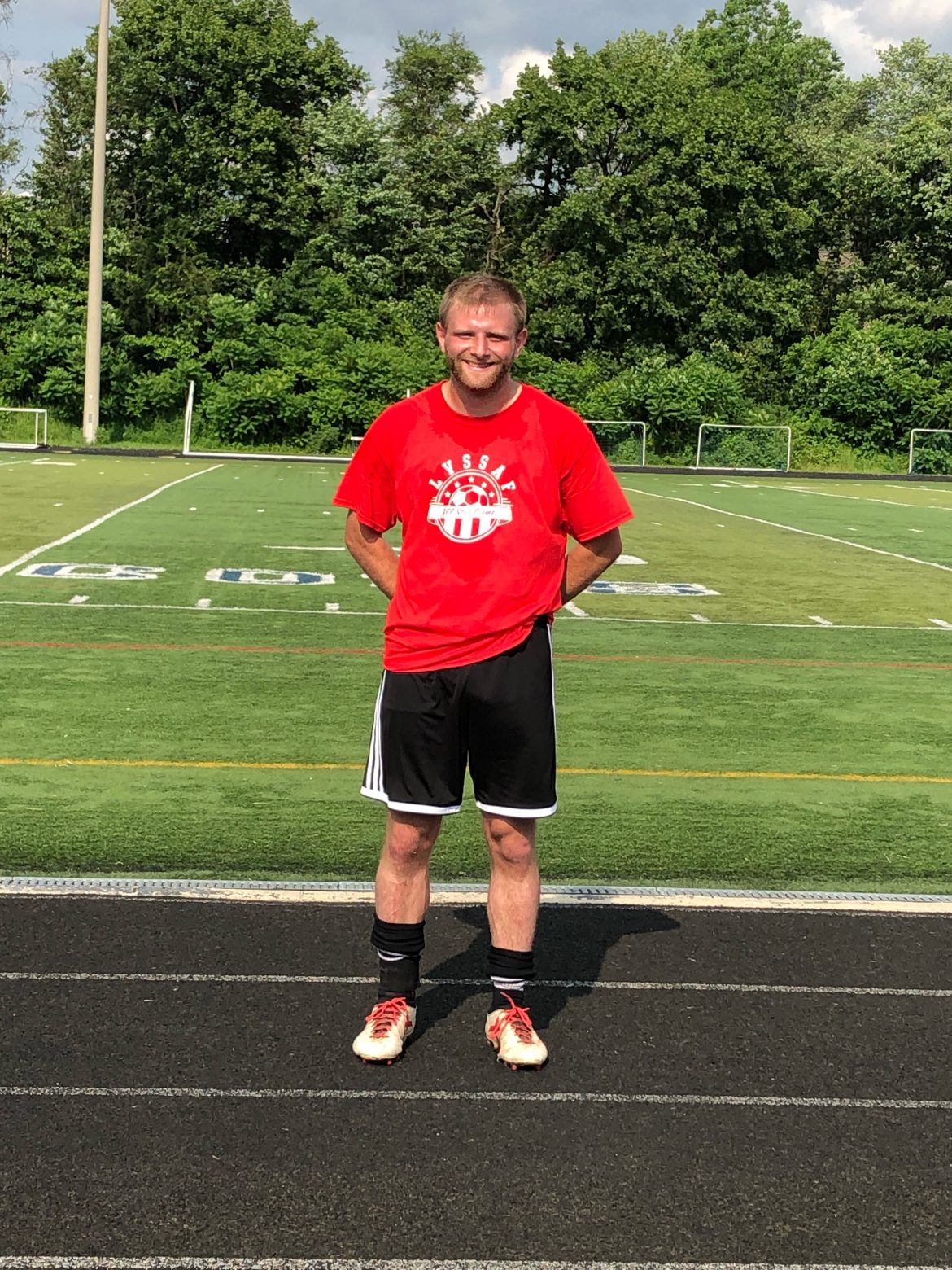 Saucon senior Jared Thatcher was selected to play in the 2019 All-Star Soccer Classic.

The Colonial League ran the table on Sunday and won both contests.  Coach Ochse, who has helped coach in the Classic for the past thirteen years, led the CL girls to victory with a 3-2 win over the EPC.  CL welcomed goals from Northwestern Lehigh’s Sara Hathaway and Maggie Motolese.  Hathaway broke the ice a little more than half way through the opening half when she made good on a penalty kick awarded due to a handball in the box.  Motolese scored the game winner with nine minutes left to play on a great through ball from Southern Lehigh’s Kristen Cocozza.

The Spartan’s Coccoza also scored a goal that put the Colonial League up 2-0 when she went upper-90 with a laser from about twenty meters out with sixteen minutes left in the first half.  Goalkeeper Ellie Cassel, also from Southern Lehigh, was outstanding in net and went the distance for the Colonial League All-Stars. 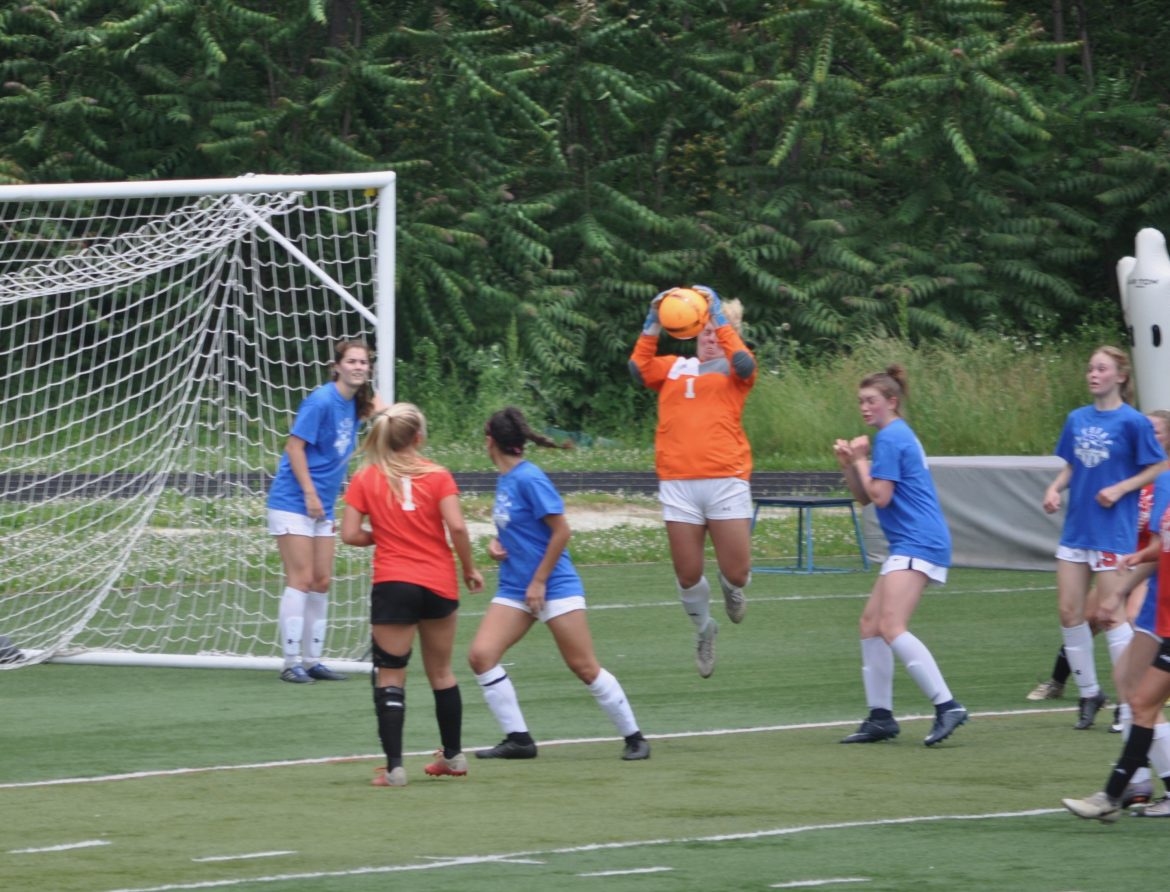 Goallkeeper Caitlyn Lazzarini of Nazareth secures the ball for the EPC All-Stars.

Stroudsburg standout Emily Banashefski assisted Parkland’s Ava Hanna and Louise Gottwald on both goals for the EPC.  Hanna’s goal at 38:41 of the second half injected a little energy into the EPC. The EPC rode the momentum and tied it up with just under 28 minutes remaining with Gottwald’s blast. But, the goal by Motolese sealed the deal for the Colonial League.

“One of the biggest challenges when bringing girls from different schools together is team chemistry.  There is not a lot of game planning prior to the competition. The goal is to get everyone in the game, try to get them in positions they are comfortable playing, and of course be as competitive as possible. It can be difficult to do all three of those tasks.

When we gave up the two goals we tried to get some of our playmakers on the field together, solidify our defense and sub kids in and out so that they had fresh legs. The girls rebounded nicely with Maggie’s go-ahead goal.” 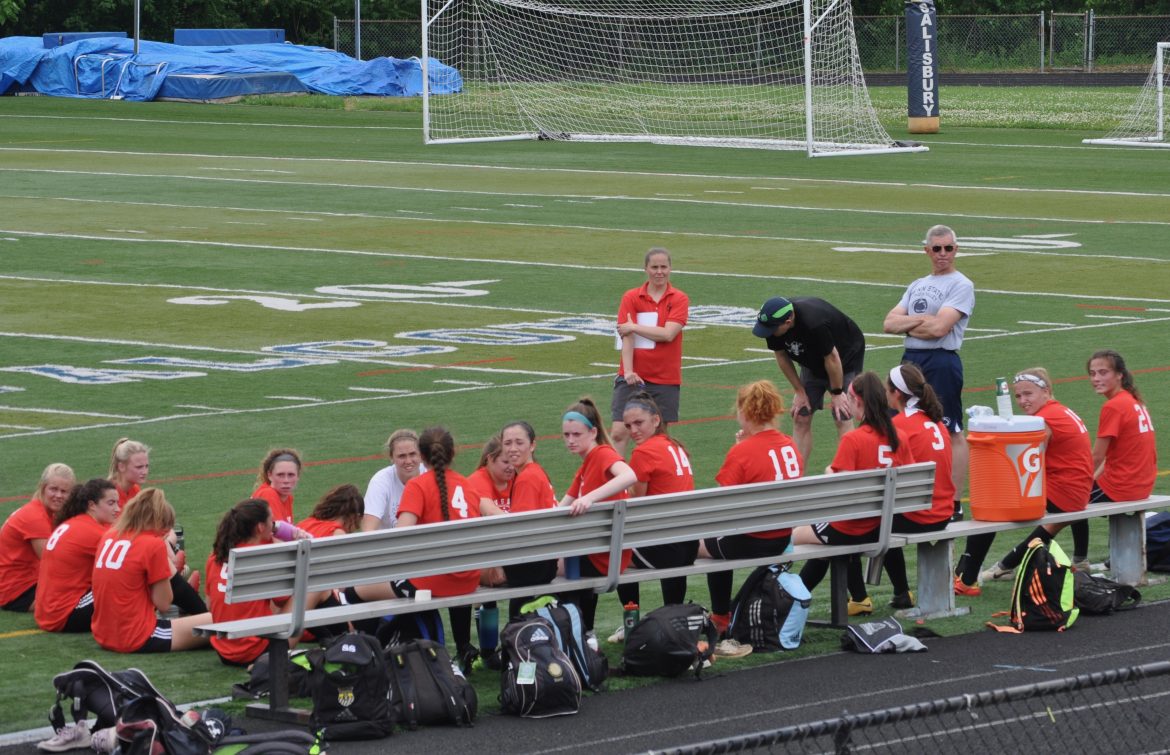 Coach Ochse and her Colonial League All-Stars getting a breather at the intermission.

The Colonial League and EPC girls showing some sisterhood after putting on a great competition in the 2019 All-Star Classic. 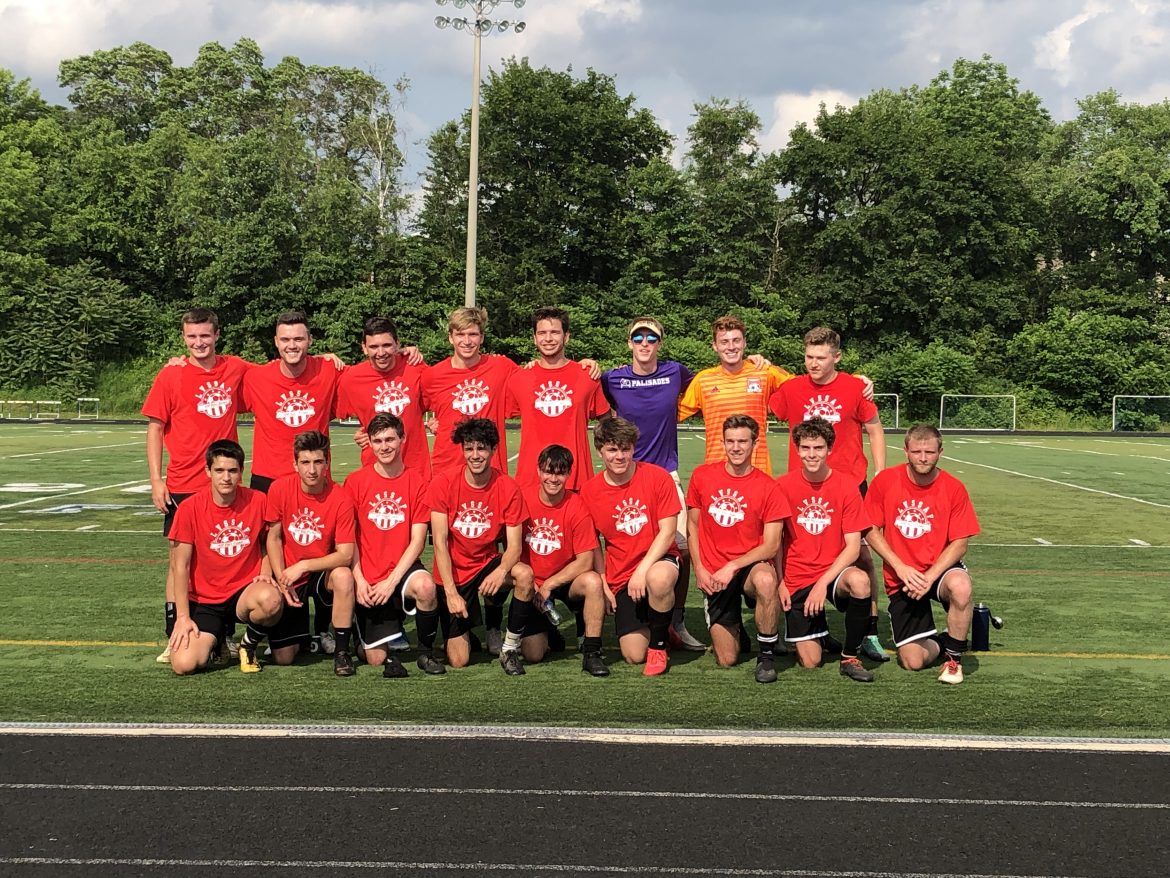 Thanks for a great day LVSSAF, the Source is with you!