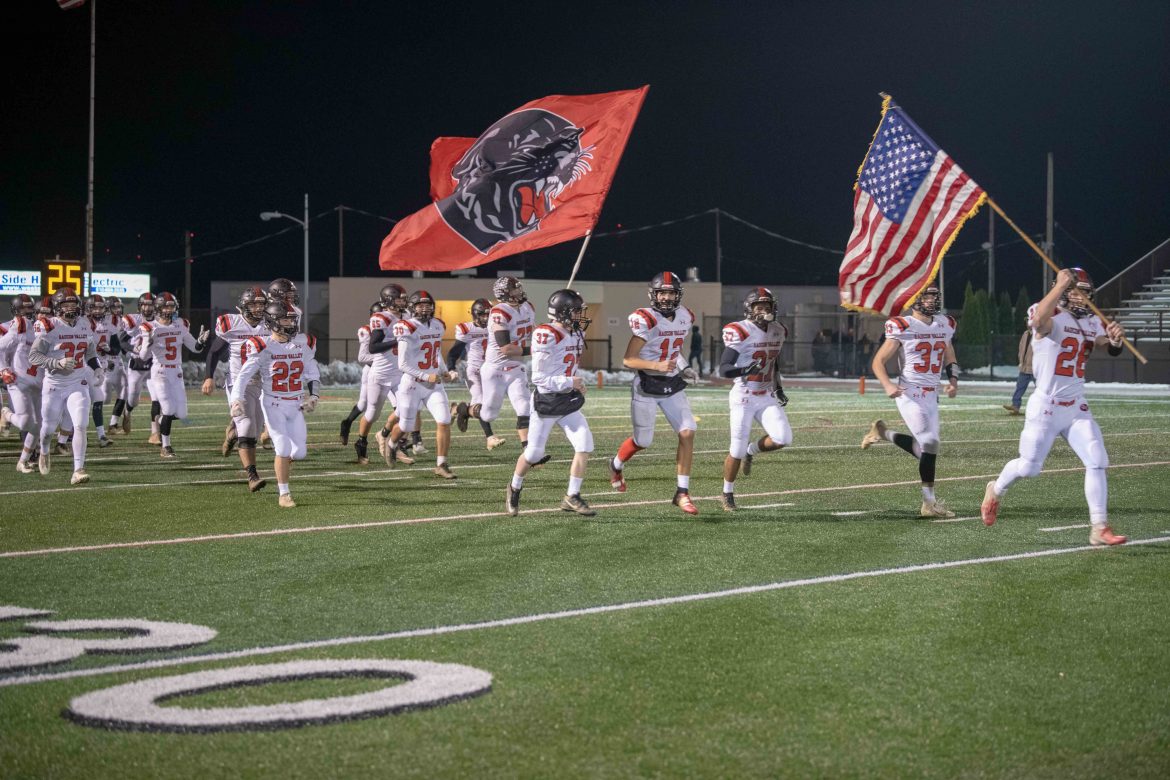 Are you ready for some high school football, Panther Nation? Once again, the time has come to start getting pumped for another Friday night football fight. After last week’s exciting win against visiting Salisbury, Saucon Valley (3-1) will travel to Bulldog country and lay it all on the line against Northern Lehigh (3-1). The ‘Dawgs own victories over Wilson (14-10), Catasauqua (51-20) and Pen Argyl (14-8). Their lone loss comes at the hands of the Bangor Slaters (28-21) in a hard-fought affair during Week 3. After falling to Southern Lehigh (4-0) on opening night, the Panthers have rebounded nicely with consecutive victories over Pen Argyl (24-7), Palmerton (35-14) and Salisbury (41-22). This game is promising to be a big-league battle!

Northern Lehigh runs a base 4-4 defense. They will walk an outside-linebacker up to the tight end side making it look more like a 5-man front. They will also press both outside linebackers up to the line of scrimmage making it look like a 6-2. The Bulldogs will likely blitz with frequency and play man-to-man on the back end. The Bulldogs will attack the middle and the edges of the Panther offense with their blitz packages. Like so many other Panther opponents, expect the ‘Dawgs to try and force the Panthers to abandon their brand of “Bully Ball” and put the ball into the air. Saucon Valley averages an impressive 326 yards rushing per game. Averaging about 220 pounds up front, Northern Lehigh is a little on the light side. But, these Bulldogs play hard and fast.

The Panther ground attack is led by sophomore Damian Garcia. Garcia (#30), who measures 5’10”, 165, has proven to be a take-it-to-the-house type of guy. He averages over 10 yards per carry, rushing 59 times for 626 yards. Garcia has scored five touchdowns. Three of his TD’s are from 50 yards out or more.

Chris Mann (#28) from his fullback position has proven to be an offensive weapon for the Panthers as well. Mann is a junior and has rushed 29 times for 315 yards and a touchdown. He also averages over 10 yards per carry. Mann is a solid 5’9″, 195 and usually makes his living as a lead-blocker for Garcia.

Also earning carries in the backfield is senior Braydyn Lugardo (#20). Lugardo measures 5’6″, 195 and runs with power and quickness. He is proving to his opponents that he is tough to tackle. Lugardo averages over five yards per carry and has found the end zone twice.

Sophomore Dante Mahaffey (#12) leads the Panther offensive attack from his quarterback position. He is a dual threat and in his short career has thrown for 1,069 yards and rushed for 538. Mahaffey already has 24 career TD’s connected to his name. He is also averaging over five yards per run.

When Mahaffey drops back to throw this week, the ball will likely end up in the hands of Ty Csencsits (#11) or Anthony Orlemann (#9). Orlemann and Csencsits are sophomores who have sticky fingers. Also rotating into the starting lineup will be freshman Alex Magnotta (#8). Magnotta leads the run-heavy Panthers with four catches for 36 yards and a TD. The Saucon receiving corp is as solid as ever.

Paving the way for the Saucon Valley ground attack are the Hogs. Seniors Nick Warnke (#77) and Evan Deily (#65) are the top hogs. Warnke who trimmed down to 245 pounds from 285 continues to have a great senior season. Deily is another week closer to being up to full speed as he gets his second start of his senior season. Deily was sidelined with an upper body injury and got back into the lineup last week against Salisbury. Joining the seniors will be three-year starter David Osman (#60). Osman, a junior, packs a pretty good punch for these powerful Panthers. Eli Deily (#76) and Cody Swinney (#56) round out the Panther offensive line. Deily, a junior, tilts the scale at 6’4″, 290, while Swinney measures 5’11”, 250. Swinney is a sophomore.

When the Bulldogs have the ball…..

The Northern Lehigh offense prioritizes their rushing attack but shows a little bit of everything. The ‘Dawgs do come across as a run-first team but have shown that they are not afraid to throw. Their offense offers multiple looks and you will see everything from double tight ends with full-house backfields to 2×2 and 3×1 spread formations. Their use of a little trickery and reverses should not surprise the Panthers. The Bulldogs certainly aren’t mammoth-like up front, but they aren’t exactly very small. Nolehi averages about 5’10”, 210 across their front line. Throw in a tight end who is about 6’0″, 180 and the average comes down a bit more. The Bulldogs are well-coached and know their assignments. Most of all, they come across as hungry and play with great effort.

The Bulldog offense is led by senior quarterback Zach Moyer (#7). Moyer is a lanky lefty who stands at 6’0″, 140. Moyer has a decent arm and is a decent runner when needed. Junior running back Joe Abidelli (#21) looks to be the top dog in the Northern Lehigh backfield and is listed 5’11”, 165. Abidelli runs with an attitude and likes to follow 5’11”, 190 Matt Frame into battle. Frame is a willing blocker and a bulldozer with the ball.

Mike Repsher (#40) is also someone to keep an eye on. He will line up out wide, as a wing and in the backfield. He is all over the place. The Bulldogs have different schemes to get the ball into his hands. Repsher may be a little on the small side at 5’8″, 155, but he plays much bigger. He is sure-handed as a receiver and has the quick feet and speed that can hurt a defense when running with the football. A lot of the Bulldog trickery seems to be designed for Repsher.

The key matchup appears to be whether Northern Lehigh’s defense, who only give up an average of 16 points per game, can stop the potent Panther rushing attack. On the season, Saucon Valley has only punted nine times. The past two games the Panthers have only punted twice. As a team, the Panthers are averaging almost eight yards per carry and 326 yards rushing per game. Scoring 28 points per game on average, Saucon Valley’s ground-and-pound is tough to stop.

The Panther defense should be able to get some stops against the Bulldog offense. Aside from Southern Lehigh where the young Panthers were beaten down by the Spartan ground game, Saucon Valley has been pretty stout against the run. In the past three weeks Saucon has given up an average of about 140 yards on the ground to each of their opponents. Not counting Southern Lehigh where Saucon Valley allowed 45 points, the Panthers in their last three games have only surrendered an average of 14 points. Northern Lehigh has scored an average of 16 points per game not counting the 51 they tallied against winless and hapless Catasauqua. The Panther defense appears to be vulnerable through the air. Saucon was mostly bend-but-don’t-break against Salisbury’s explosive passing game, but the Panthers did give up 269 yards and two touchdowns. Luckily for Saucon, Northern Lehigh doesn’t appear to have as lethal a passing attack as possessed by Salisbury.

Saucon seems to have cured the “fumblitis” which plagued them earlier in the season. The Panthers lost six fumbles during their first two games. The past two games, Saucon has not turned the ball over at all. If the Panthers suffer a relapse or suffer from excessive, drive-killing penalties, achieving a victory will obviously be much more difficult.

Once again, Week #4 against Northern Lehigh will be no easy task for Saucon Valley. Nonetheless, this will be a competitive Colonial League battle between two 3-1 programs. It is going to b a great night for high school football!