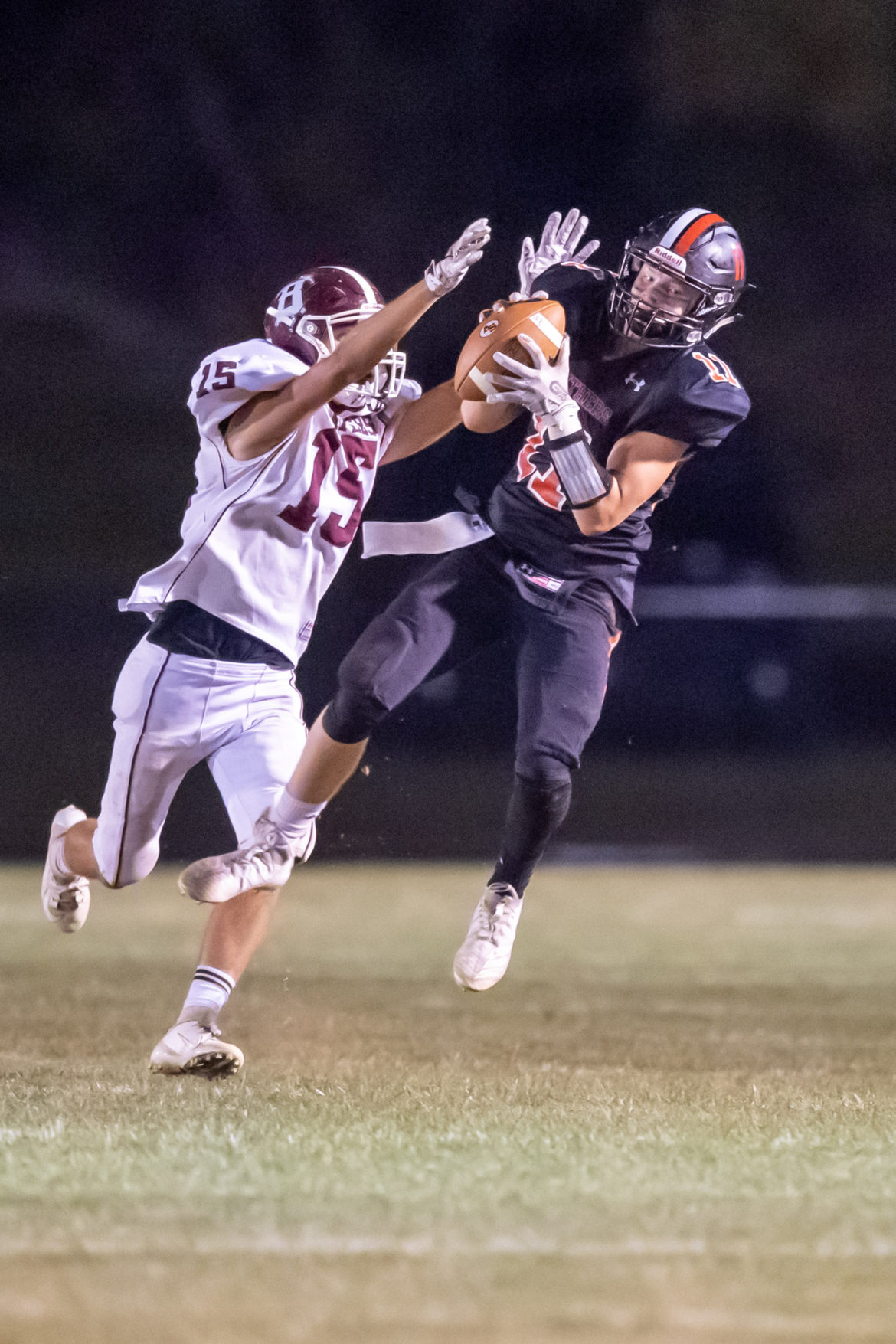 Sophomore Ty Csencsits (#11), for the second week in a row, came up big for the Panthers.

Another action-packed Homecoming came and went this past week in Saucon Valley.  The bonfire and pep rally went off as scheduled.  Thomas Spirk was named “King”,  Talitha Diggs was confirmed as the 2019 Homecoming Queen and the Panther football team perilously treated the hometown crowd to a 28-21 victory over the visiting Bangor Slaters.

It was another thrilling game that wasted no time getting started.  Bangor’s Nick Davanzo fielded Zach Nicholas’ opening kickoff at his own 14-yardline and found a seam on his right which he exploited for an 86-yard kickoff return for a touchdown.  Only seventeen seconds into the game Saucon Valley spotted Bangor a 7-0 lead. 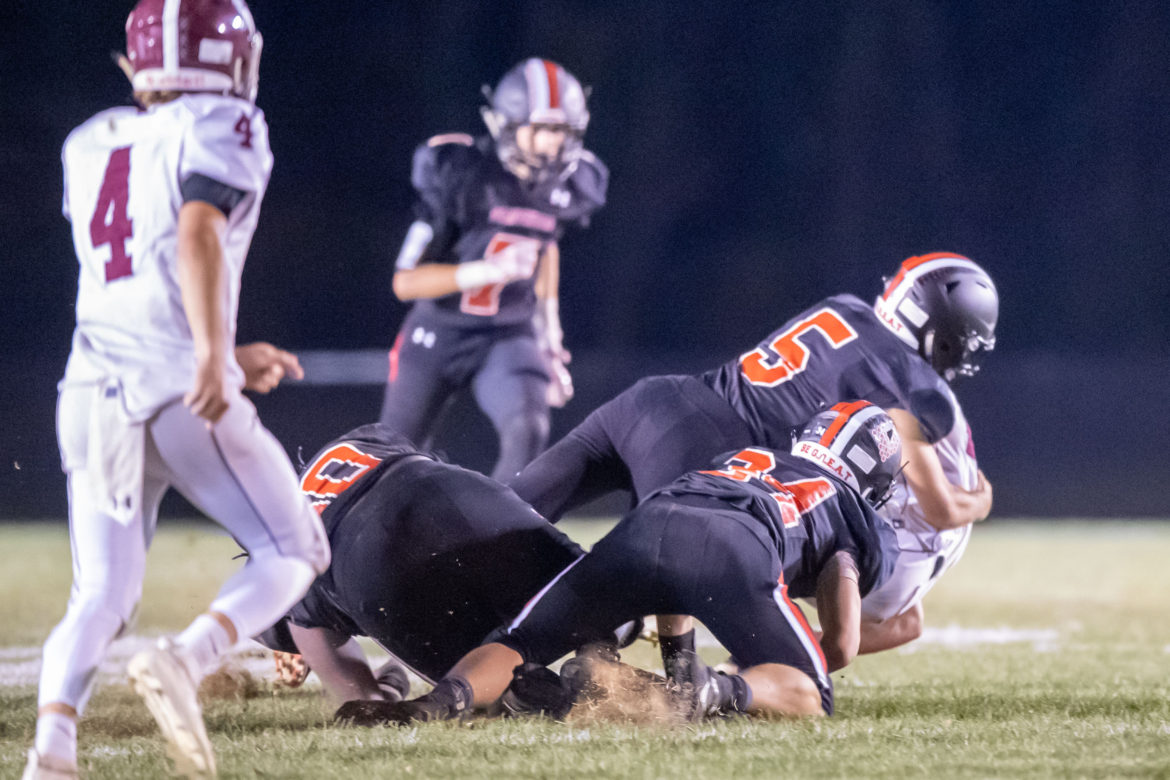 The Panther defense was put to the test for all four quarters against the Slaters.

The Panther offense took Bangor’s ensuing kickoff and drove the field down to the Slater 25-yardline. But, the drive stalled forcing Saucon Valley to turn the ball over on downs.  However, on 3rd & 8 from the Slater 39-yardline the Panther defense stepped up with Evan Deily’s strip-sack of Bangor quarterback, Rein Faransbach.  The loose ball was pounced on and recovered by Saucon defensive tackle David Osman.  The Panthers took possession at the 35-yardline and overcame a holding penalty to cash in on a well executed screen-pass from Dante Mahaffey to Damian Garcia for a 25-yard touchdown.  Zach Nicholas converted the point-after for the Panthers and with under one minute left in the first quarter the score was knotted at 7-7.

Only two plays later the Panther defense created another Slater turnover.  Facing a 2nd & 11 from their own 40-yardline the Slaters went to the air looking for an explosive play.  Dante Mahaffey, however, had other ideas.  Mahaffey undercut Nate Owens’ skinny-post route for an interception.  Mahaffey seemingly returned the pick 57 yards for a touchdown down the Panther sideline, but Saucon Valley was flagged for an illegal block during the return.  Nonetheless, the Panthers completed a 30-yard drive in eight plays when, on 2nd & Goal from the 5-yardline, Mahaffey rolled to his right and found receiver Ty Csencsits on an out-route for a score.  Nicholas’ extra-point was good and halfway through the second quarter, the Panthers owned a 14-7 lead. 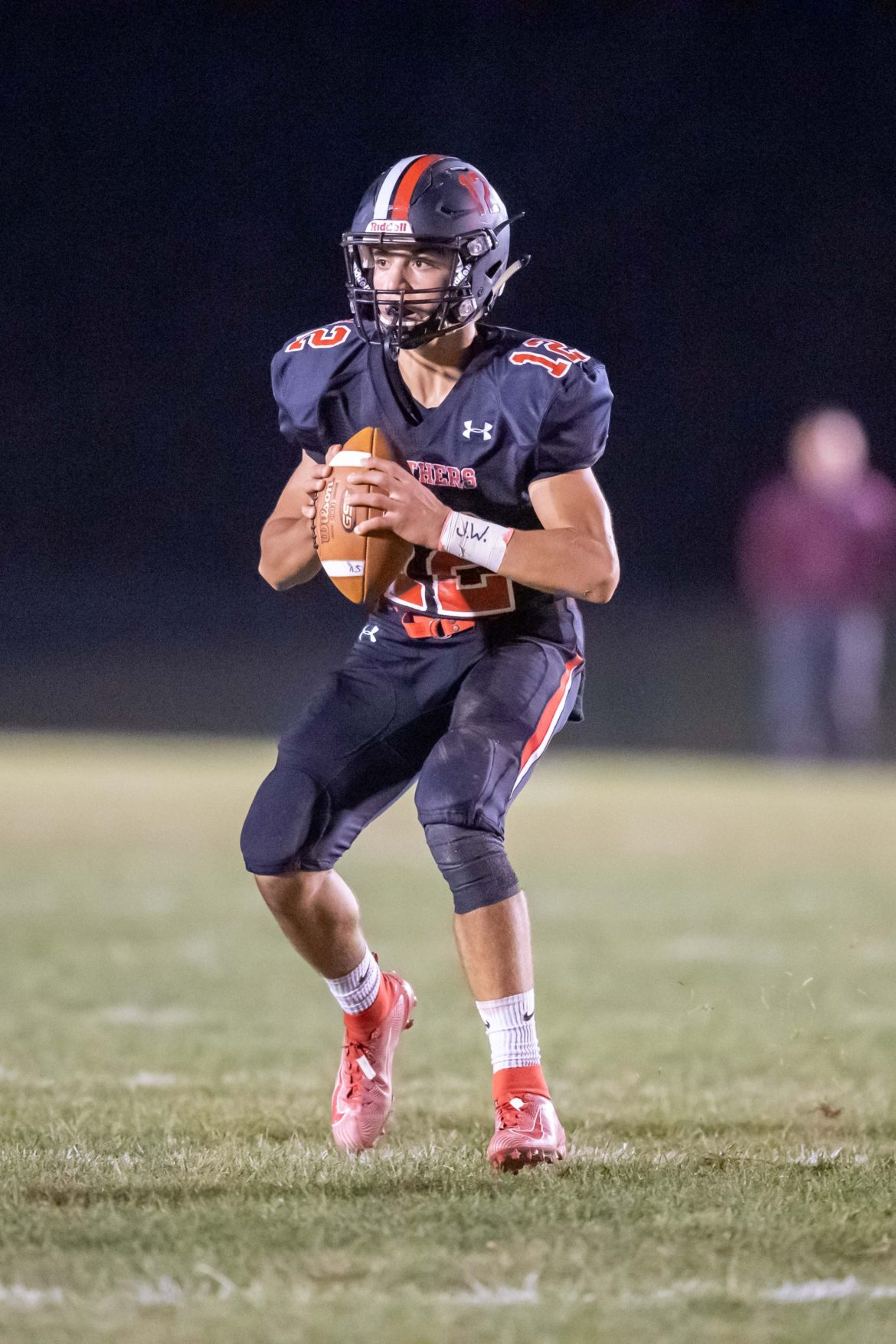 The two teams traded punts as time in the first half was running low.  Bangor mounted a scoring drive that seemed as though it was going to fizzle out.  But, on 4th & 13 from the Panther 30-yardline Bangor’s Faransbach threw a “Hail Mary” type pass into the Panther end zone in the direction of Nate Owens.  Owens, using every bit of his 6’3″ frame high-pointed Faransbach’s toss to beat the Panther coverage for the score.  The PAT was good and the two teams would hit the intermission all tied up at 14-14. 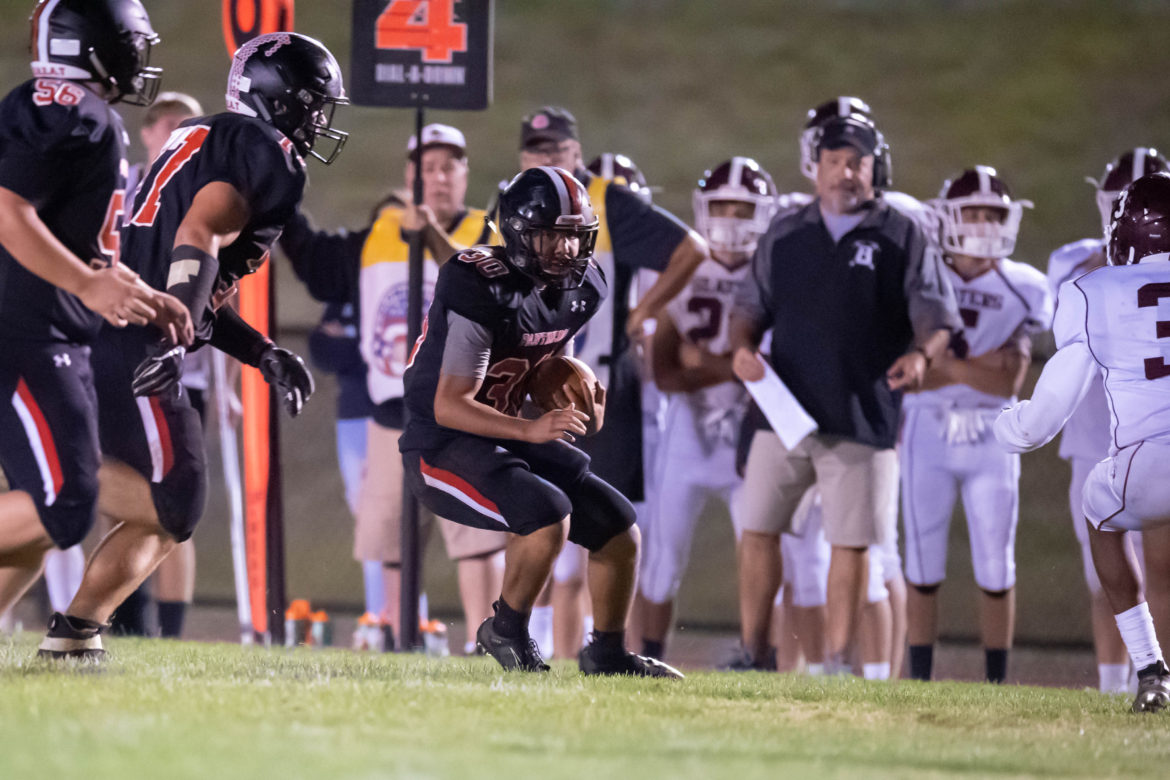 Panther sophomore Damian Garcia was able to convert Mahaffey’s screen pass into a key first down.

The teams traded possessions that included a Panther punt and a Slater turnover on downs to start the second half.  Saucon Valley’s offense took possession at their own 34-yardline and then went to work.  The Panthers engineered a nine-play scoring drive that ended with a Braydyn Lugardo blast through the belly of the Slater defense.  Overcoming another holding penalty and converting a 4th & 9 situation from the Slater 27-yardline with another Mahaffey to Garcia screen pass, Lugardo’s fourteen yard touchdown and Kicker-Zach’s extra-point gave the Panthers a 21-14 advantage as the final quarter began. 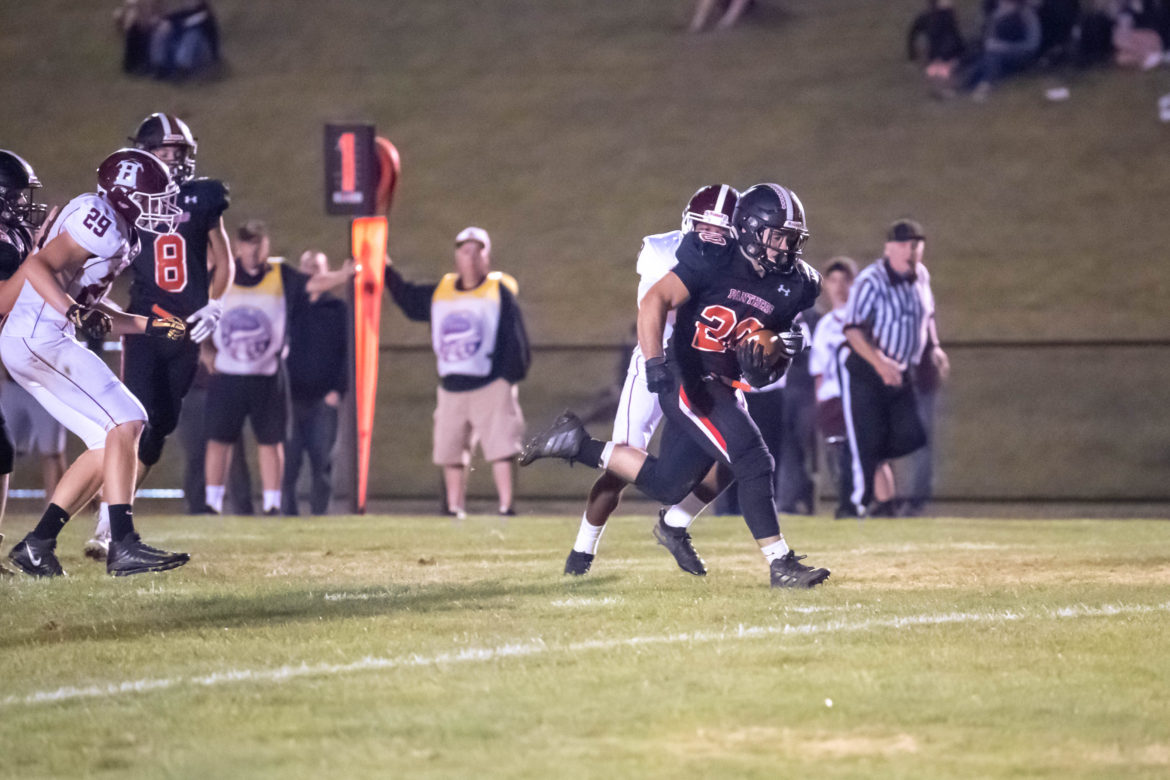 The teams traded punts early in the fourth quarter giving Bangor possession deep in their own territory at the 13-yardline.  Saucon Valley’s defense forced Bangor into a 3 & 10 situation from their own  24-yardline. The Slaters once again went long ball and Nate Owens came up with Faransbach’s 32-yard heave.  Bangor’s bomb then got an additional 15-yard roughing the passer penalty tacked on giving Bangor the ball 1st & 10 at the Panther 30-yardline.  Saucon’s defense was stout and created a 4th & 17 from the Panther 37-yardline.  But, the Slaters were not finished.  Faransbach scrambled right to avoid the Panther pressure and lofted another bomb toward Owens.  Owens once again high-pointed the Faransbach’s throw in the end zone for a touchdown.  The Slater point-after was good and with only 4:40 left in the game the score was deadlocked 21-21. 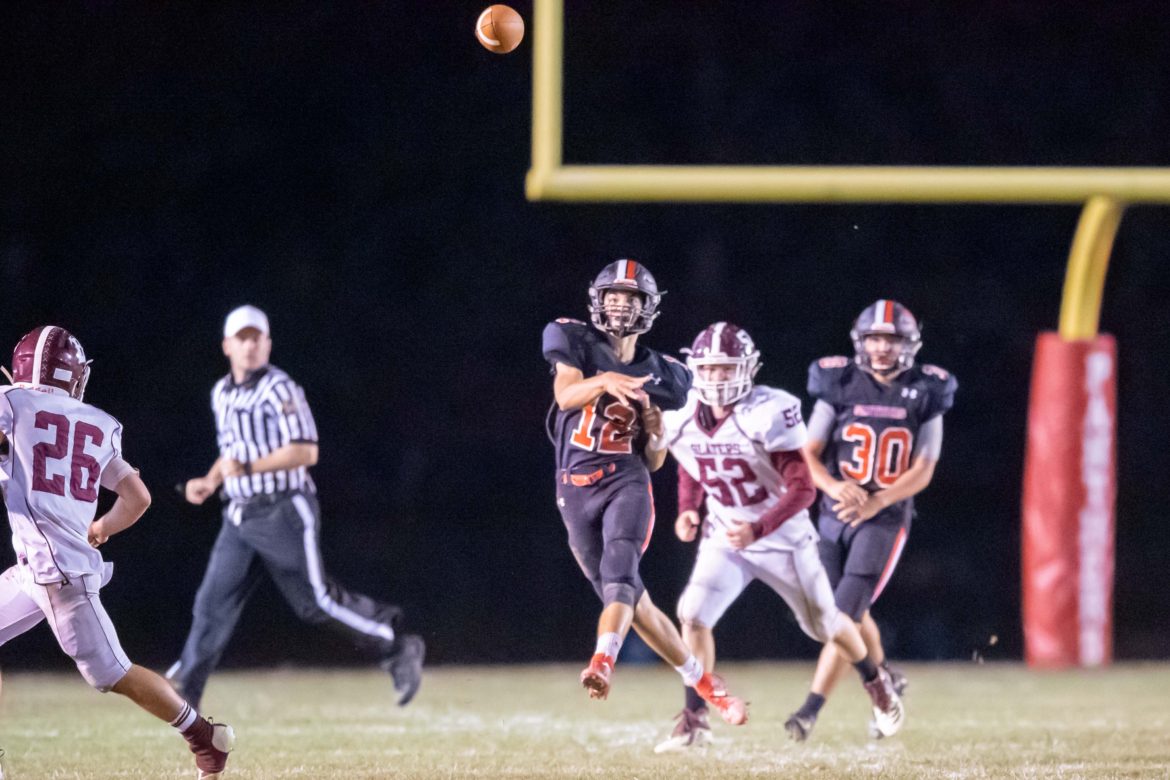 Dante Mahaffey working the ball downfield to his receivers when the game was on the line.

Saucon Valley had enough time available to score but needed to go to work.  A holding penalty got things off to a bad start and put the Panthers into a 2nd & 20 hole from their own 13-yardline.  But, Mahaffey found Csencists for a 30-yard completion near midfield.  The Panthers mixed a little run and a little pass, but ultimately, on 3rd & 9 from the Slater 39-yardline, Mahaffey once again found Csencsits for a big play.  Csencsits, a sophomore, ran a little “wheel-route” that confused the Slater defense. The Hogs gave Mahaffey the time he needed allowing him to connect with a wide-open Csencsits for the game-winning touchdown.  With 1:37 remaining in the game, “Kicker-Zach” added the extra-point and the Panthers held on to secure a 28-21 homecoming victory.  The Saucon Valley football team improved to a 5-1 record in another nail-biter classic. 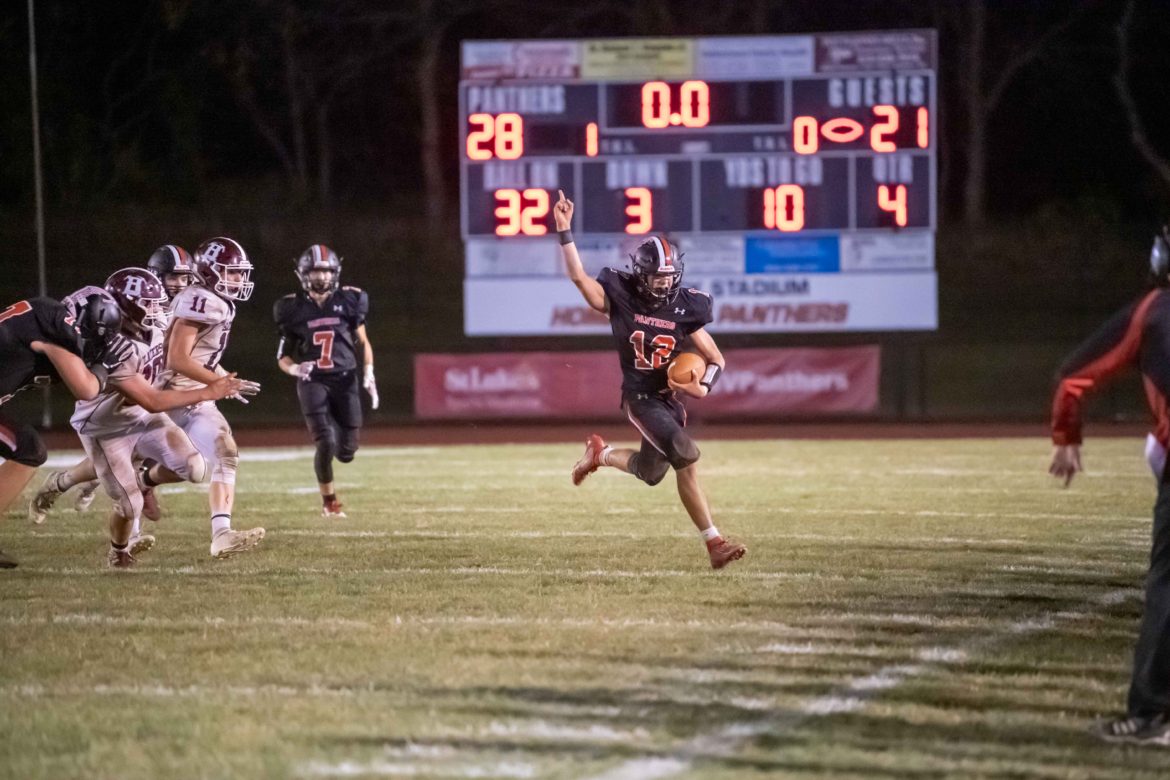 As the clock hits zero, Dante Mahaffey celebrates his second interception and the Panthers 2019 homecoming victory against the Bangor Slaters.

All photos by Chris Christian. To see more photos please scroll down and visit his website, 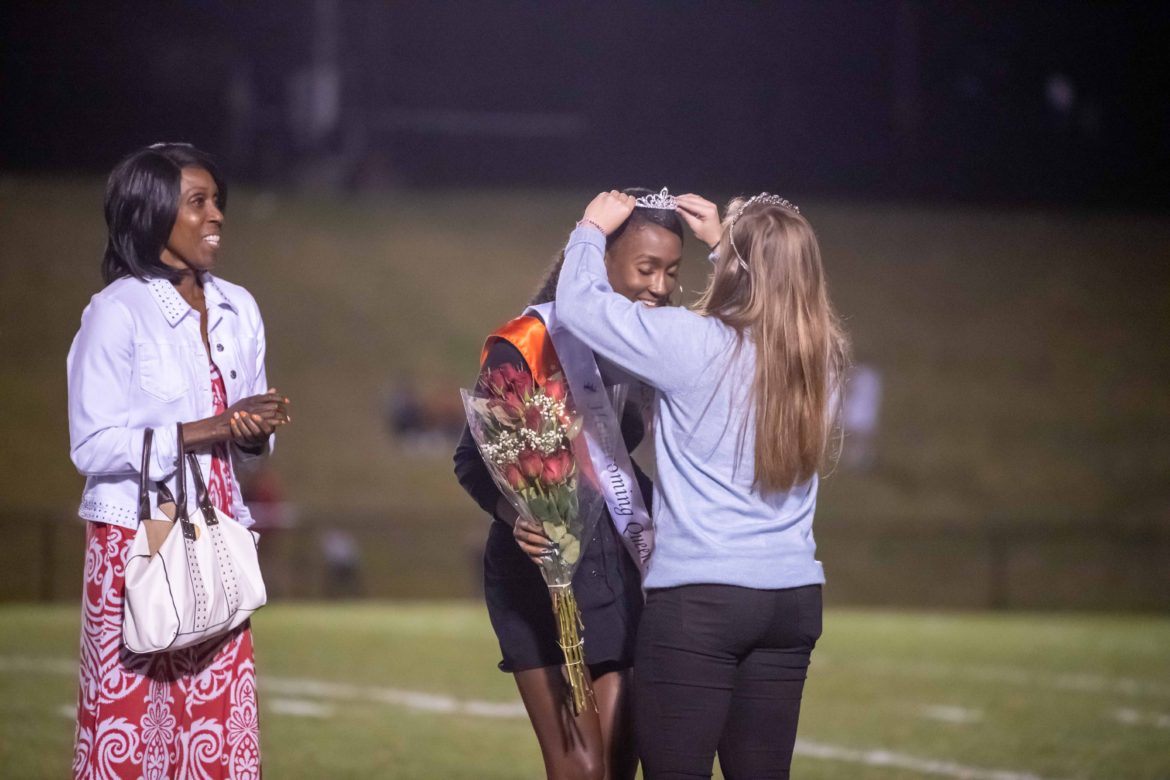 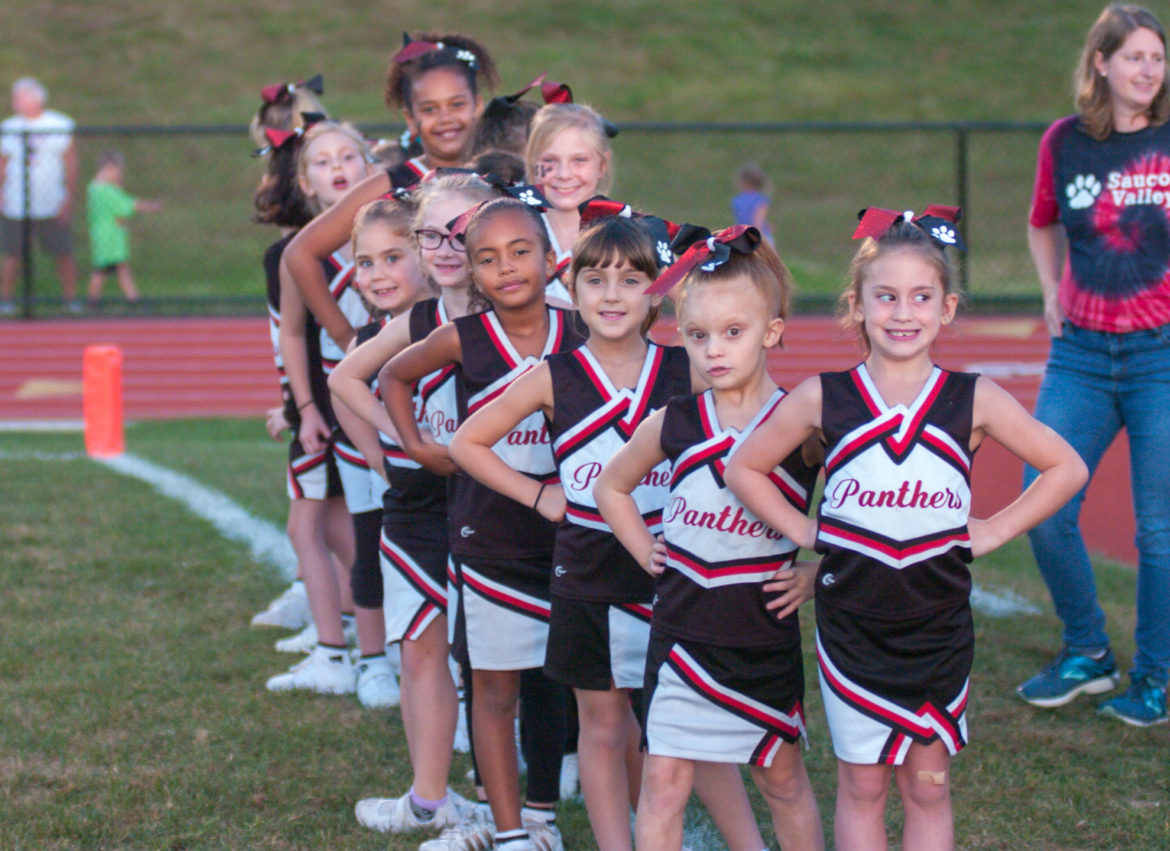 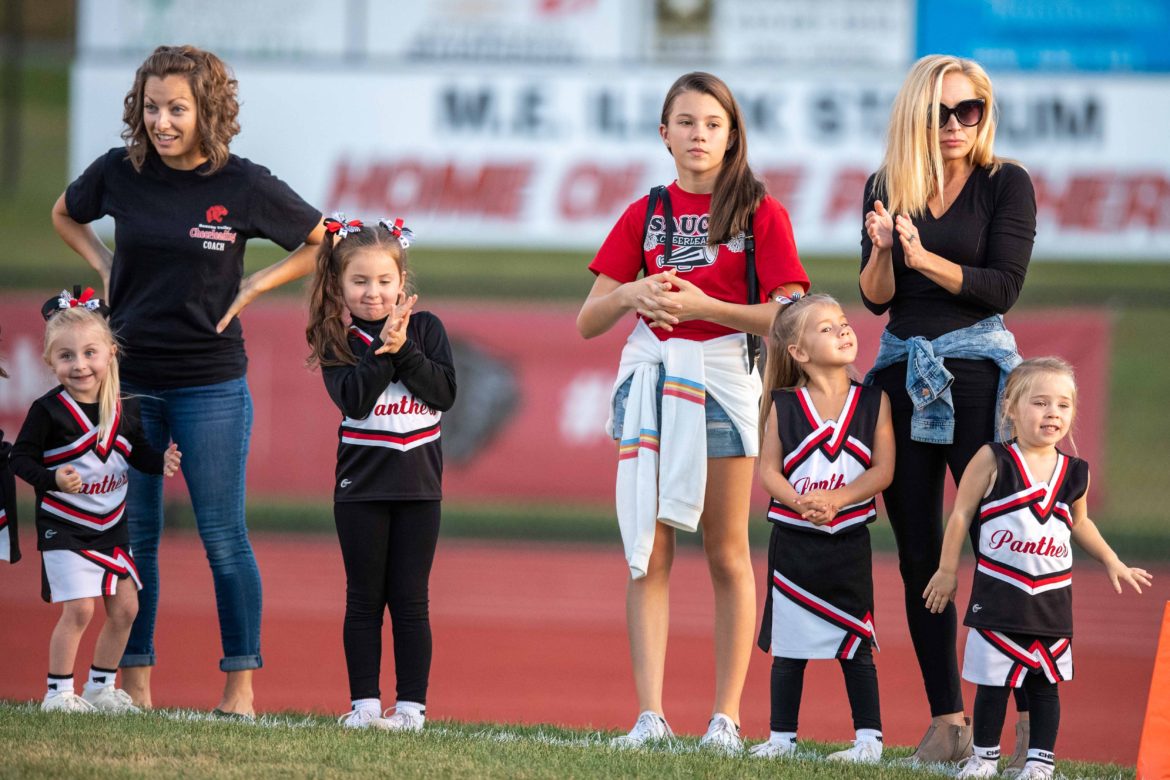 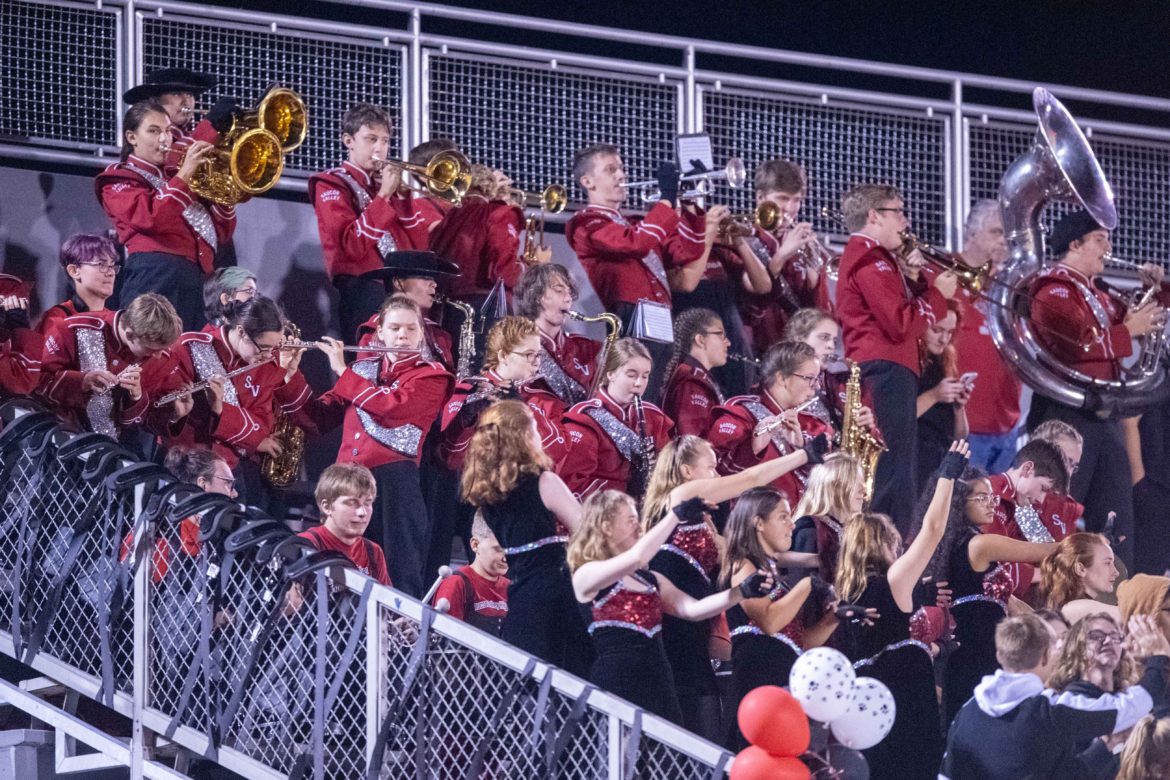 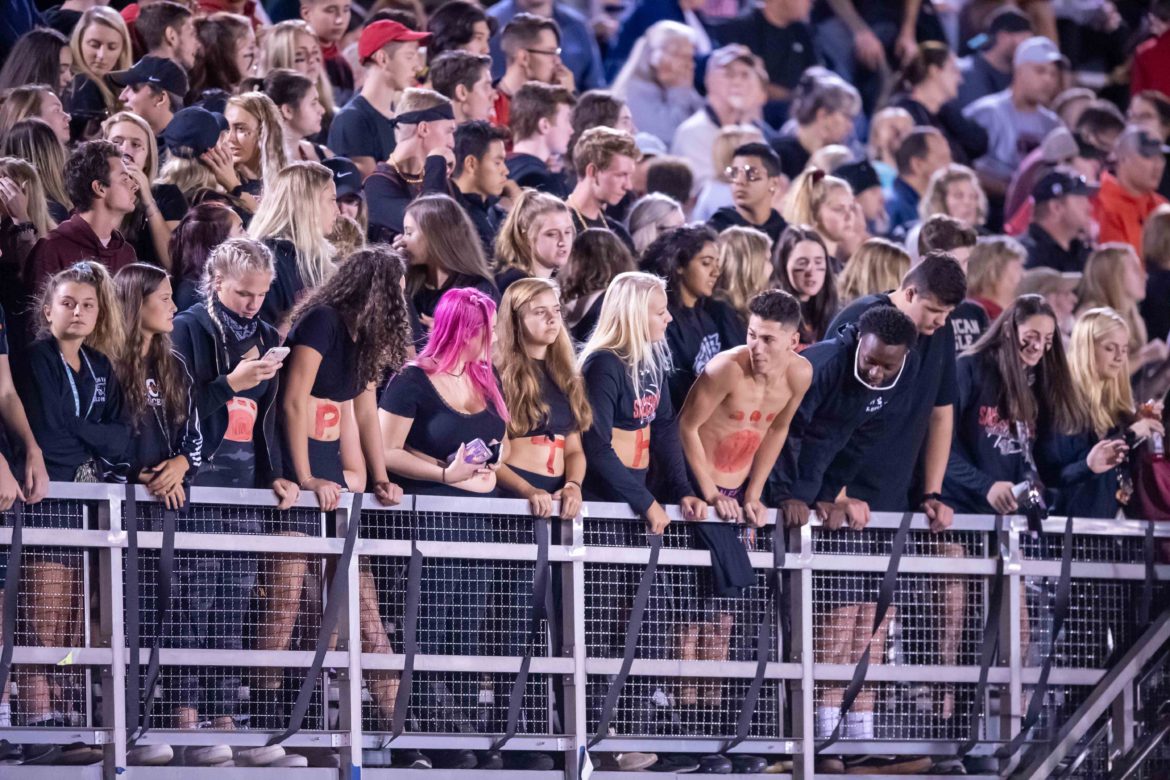 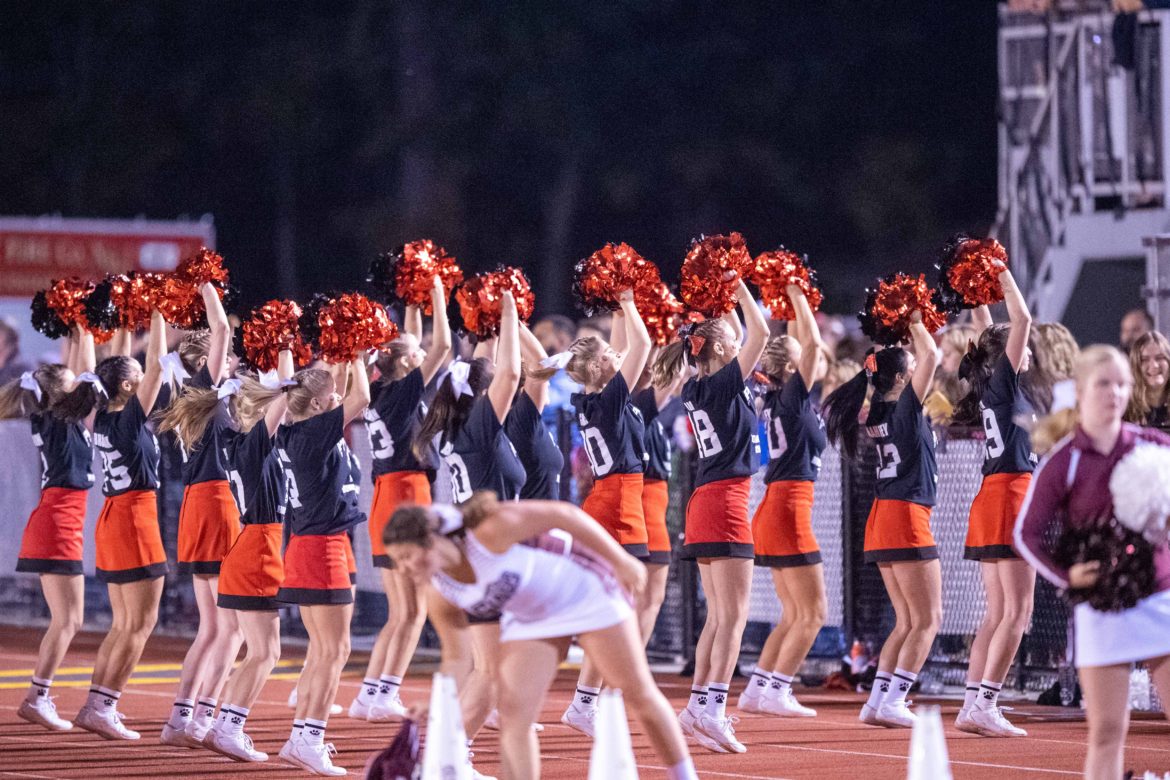 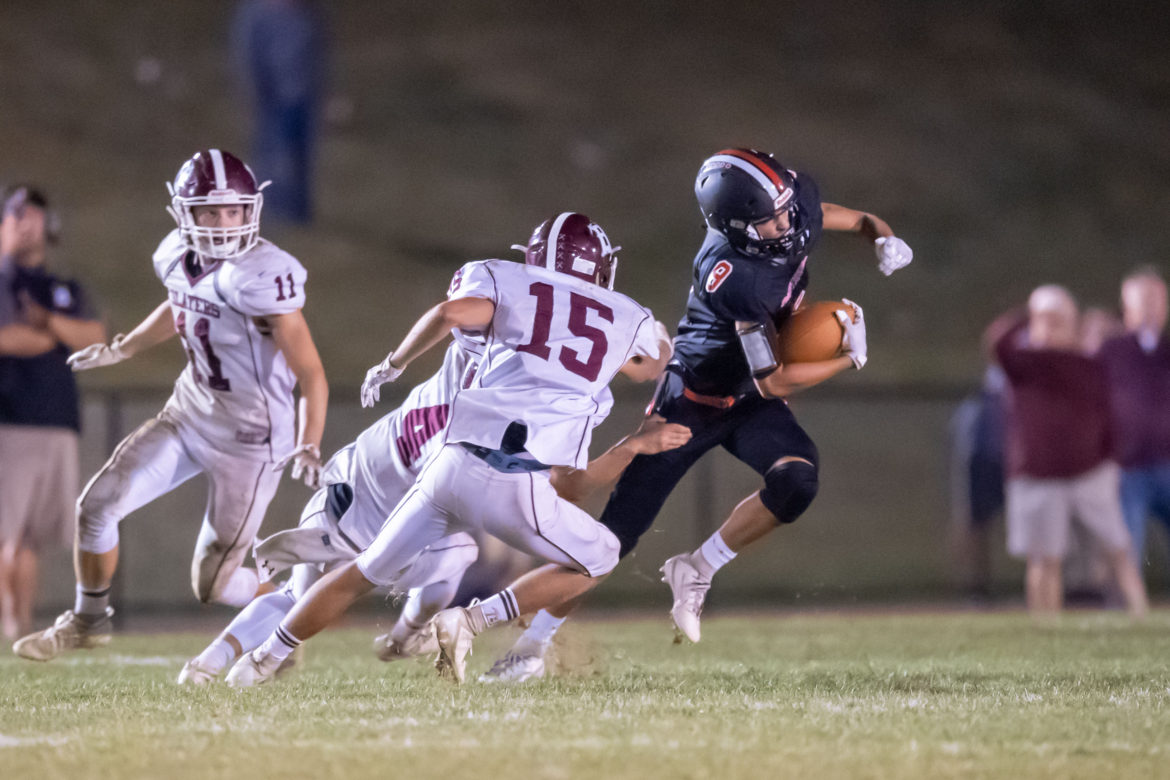 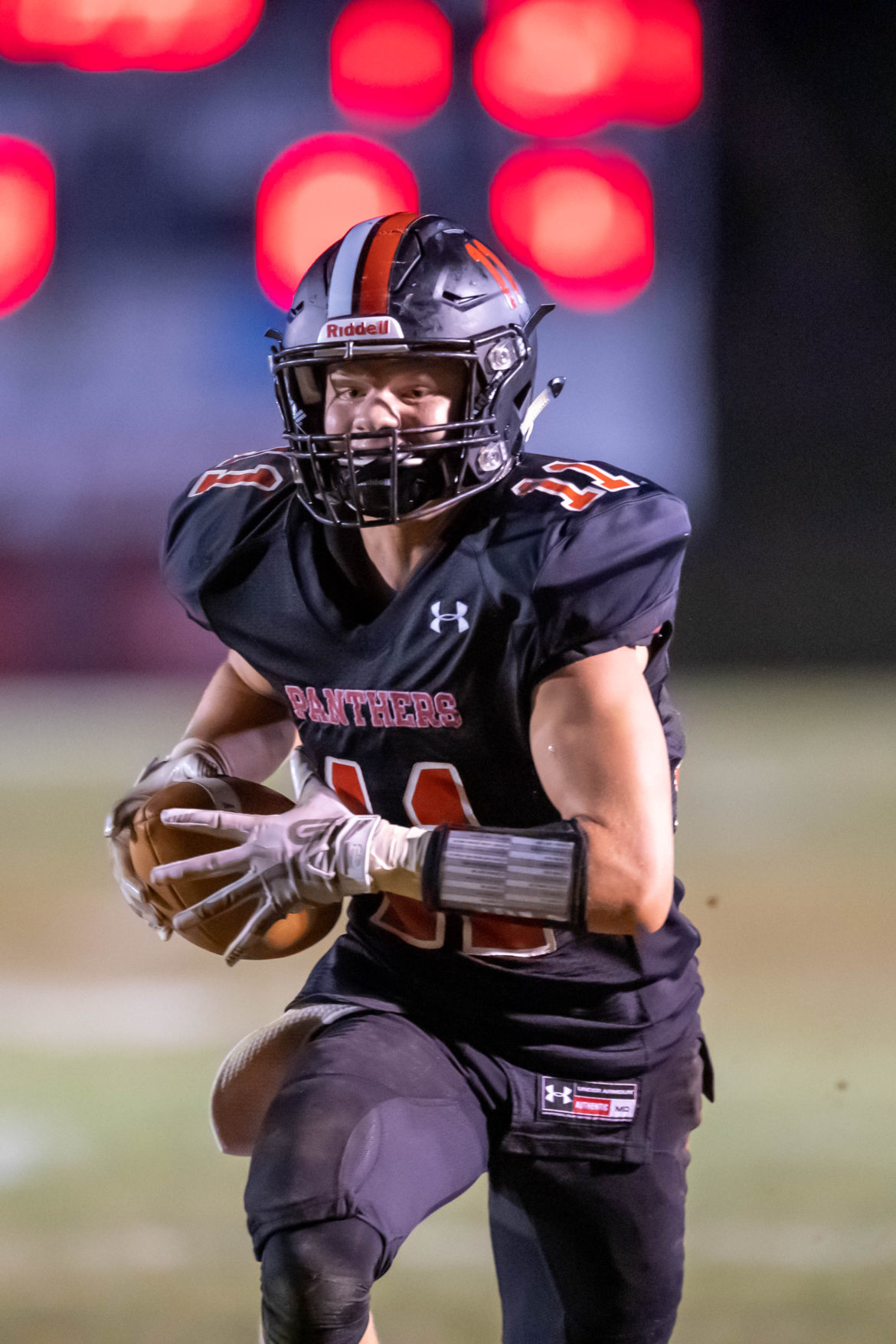 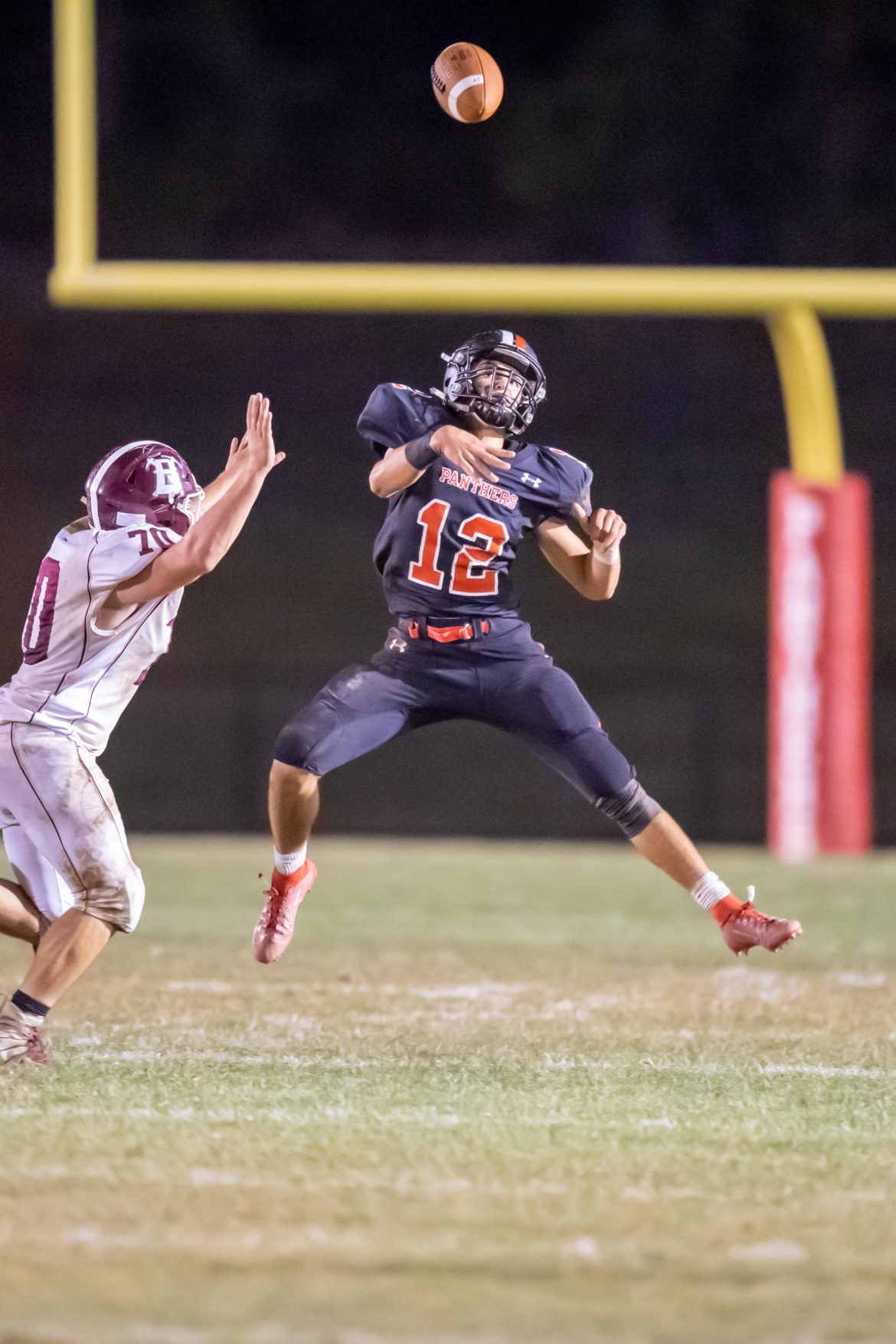 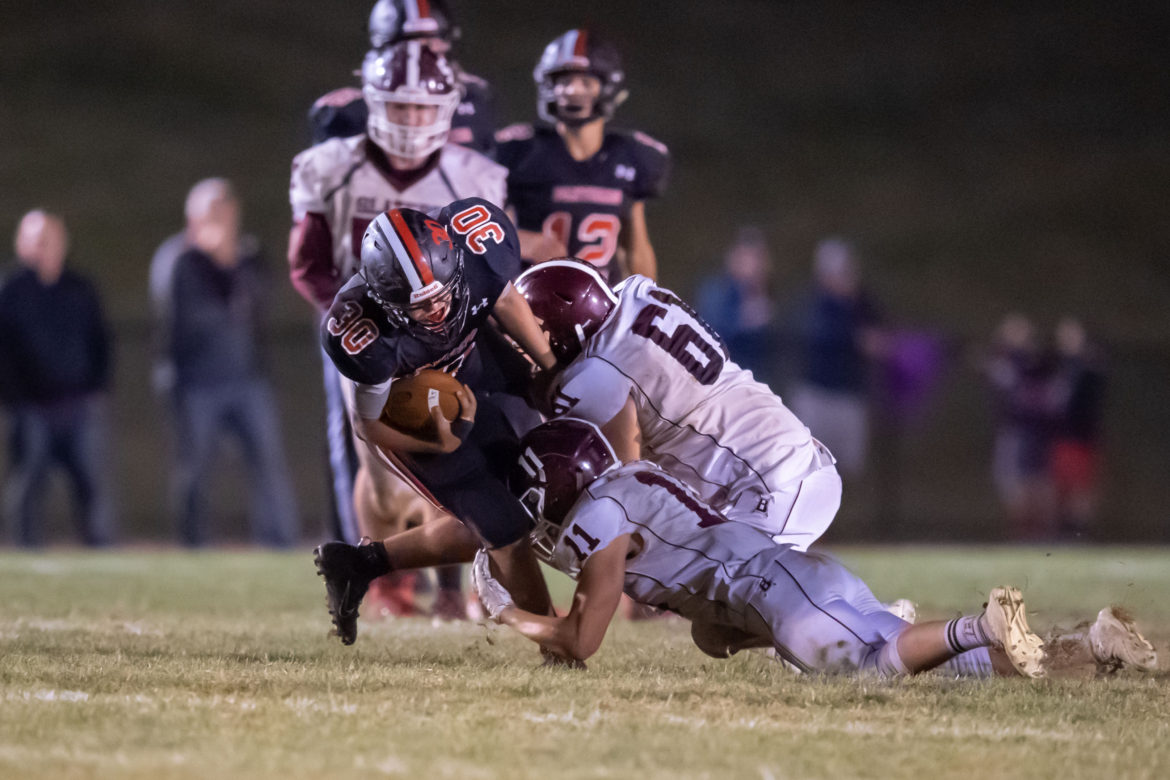 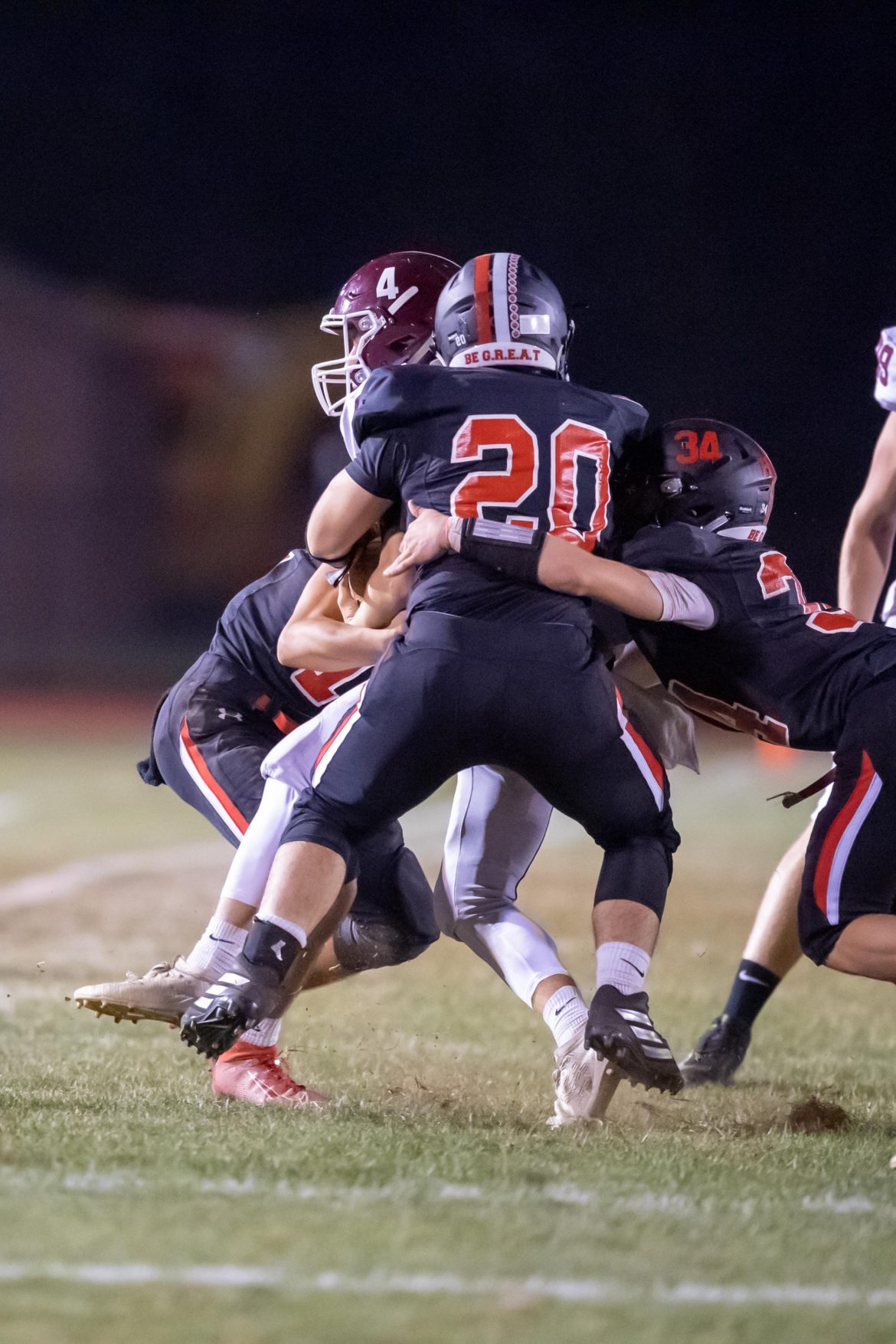 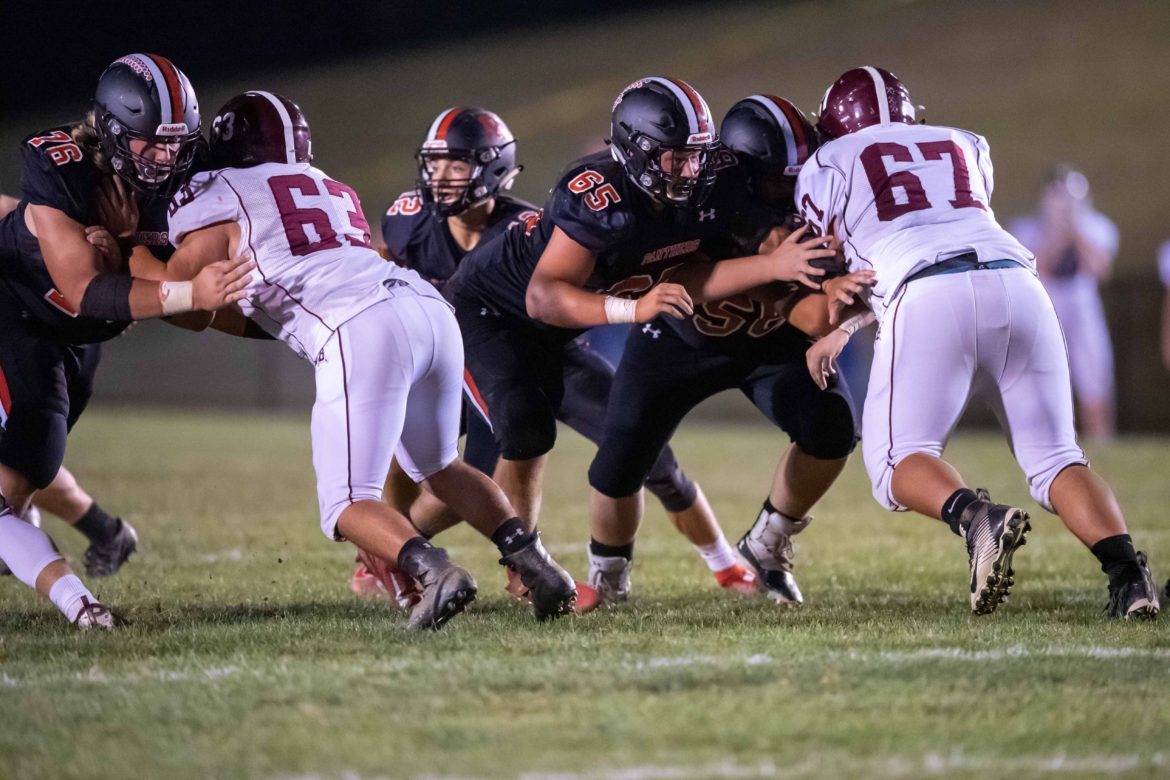 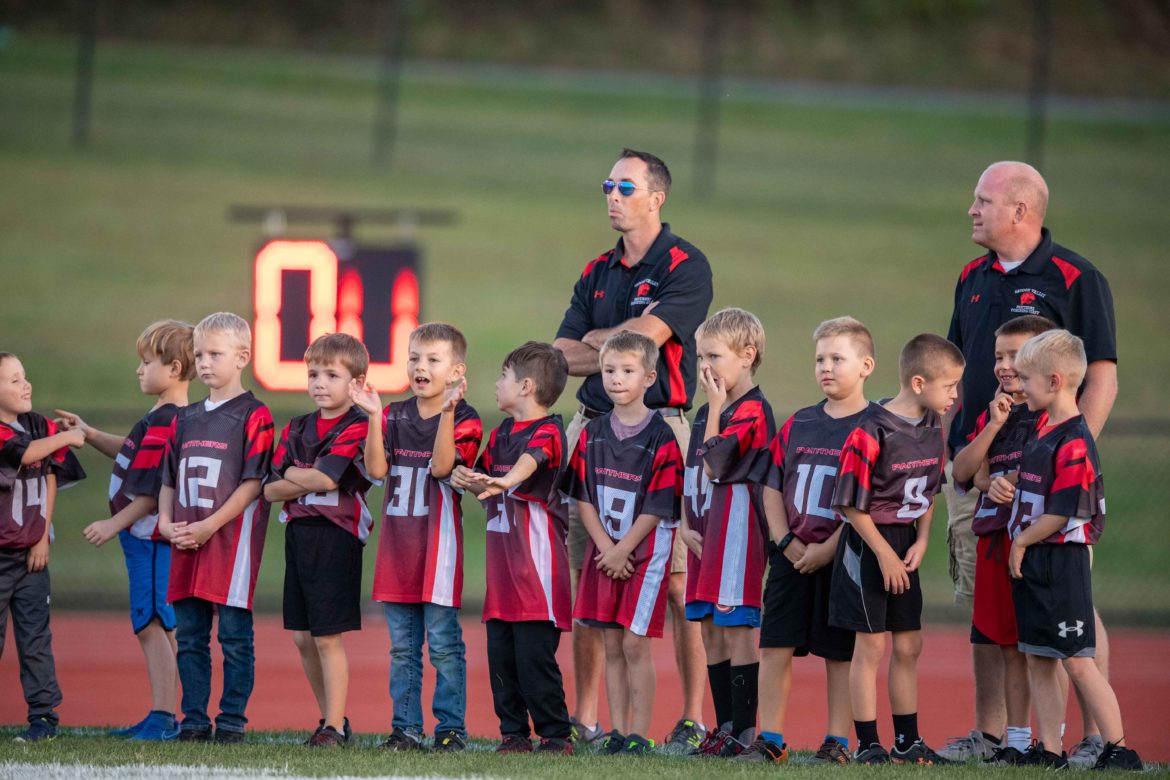 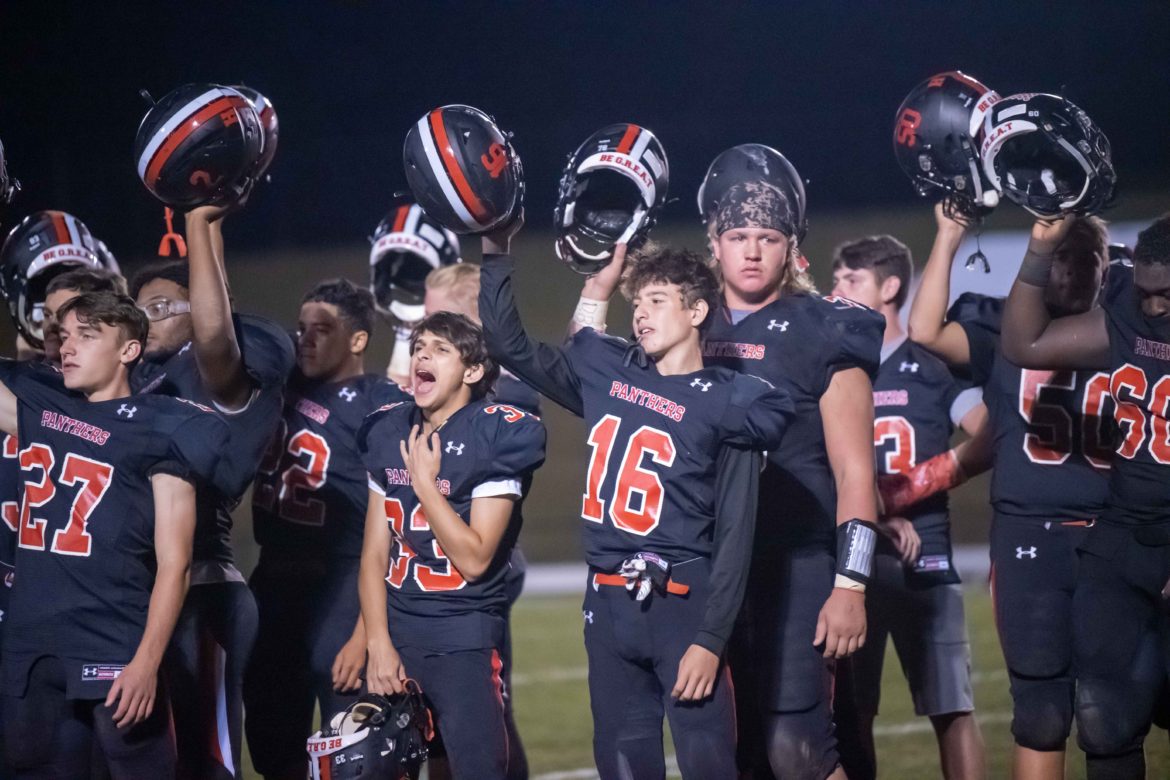 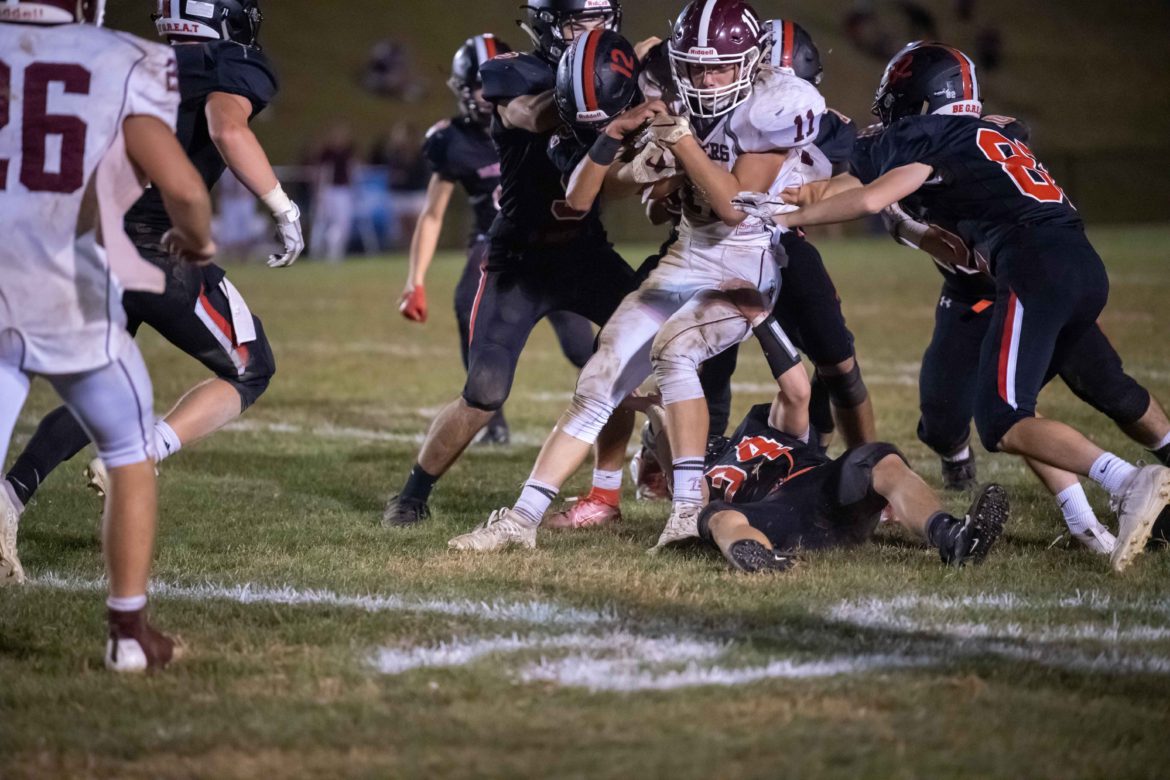 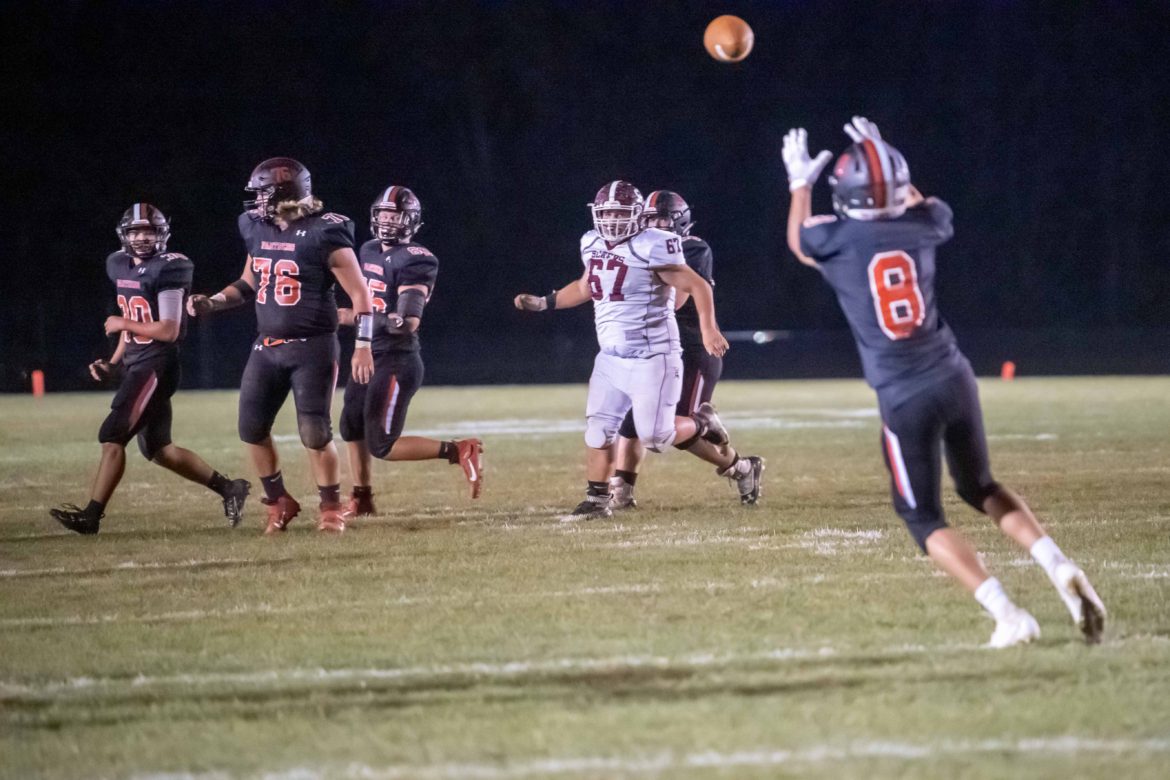 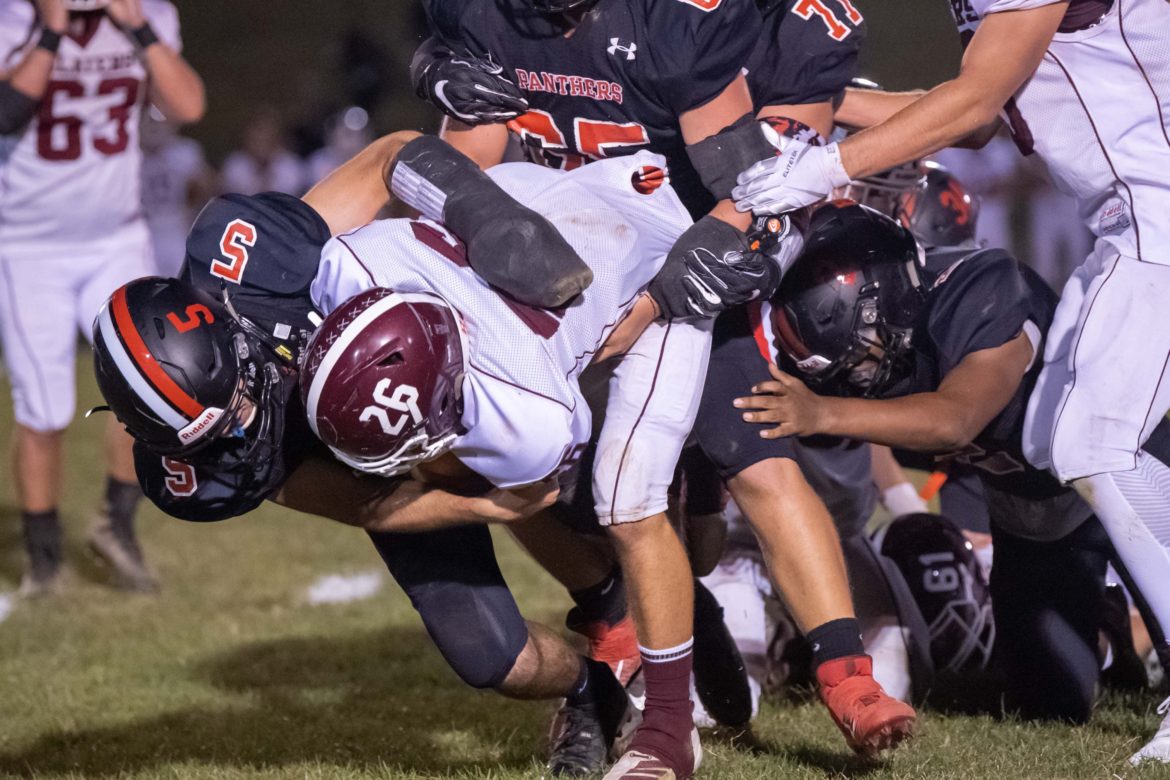 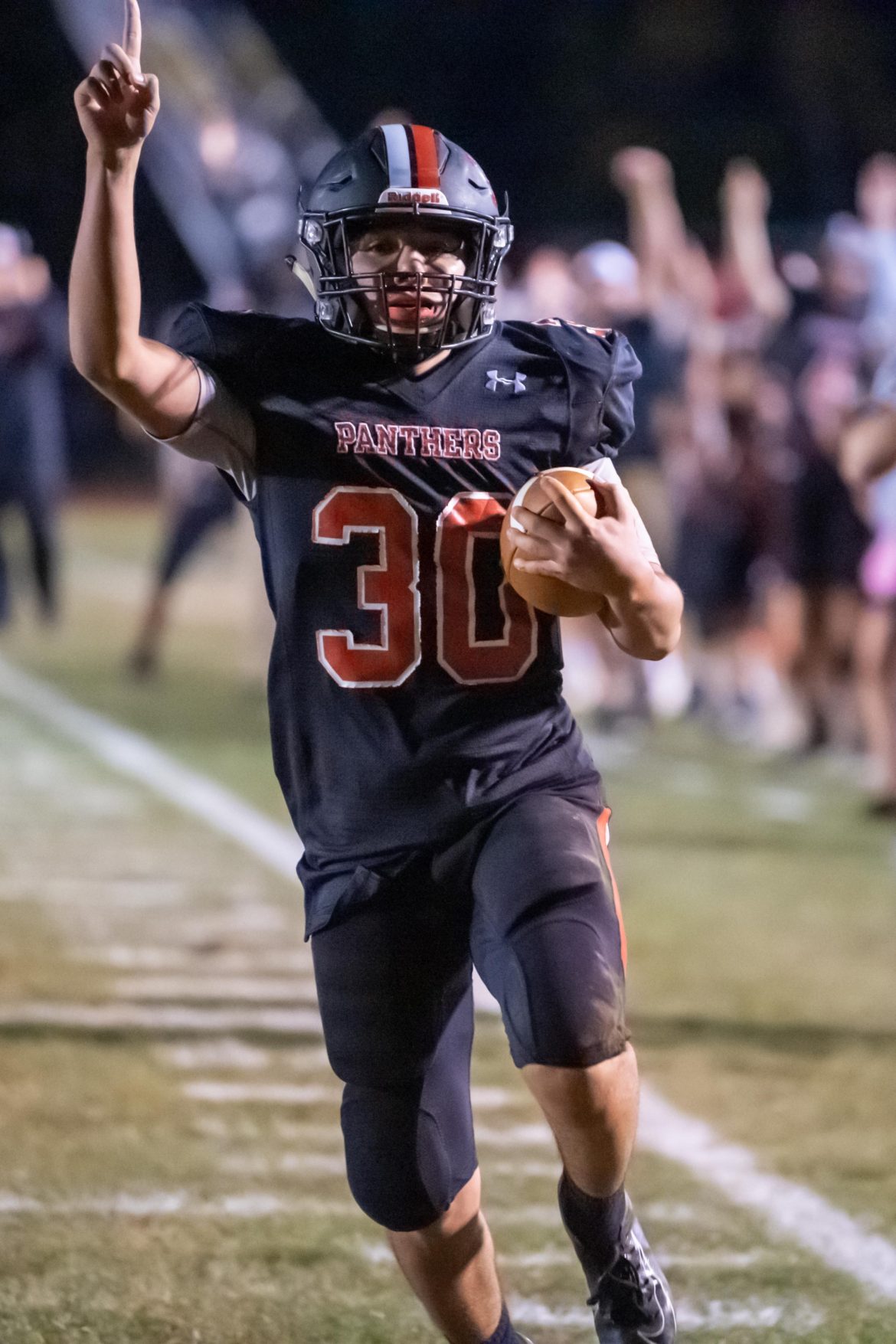