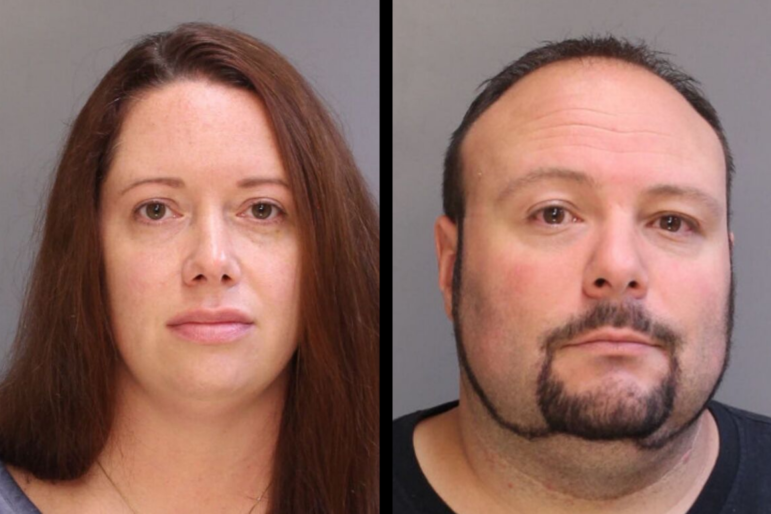 Denise Gill, 38, and her husband Michael Gill, 42, of Milford Township, Bucks County, allegedly exploited drug addicts from the Quakertown area as part of a retail theft operation they ran out of their QMart store, One Stop Health and Beauty Shop. Authorities say Denise Gill allegedly called many of the people who frequent the Quakertown Farmers’ Market (colloquially known as QMart) “crackheads” and implied that they were all too willing to steal in order to obtain cash to buy drugs.

A Milford Township couple has been charged in an alleged retail theft scheme in which authorities claim they exploited Quakertown area drug addicts in order to sell stolen health and beauty items in their QMart store.

Detectives from the Quakertown Borough Police Department and the Bucks County DA’s Drug Strike Force allegedly found that the Gills enlisted people suffering from opioid and methamphetamine addictions to steal health and beauty products from retail stores, which they then purchased at a fraction of their retail value and sold for a profit.

“The Gills sold many of the stolen items through an eBay account associated with their store One Stop Health and Beauty Shop located at the Quakertown Farmers Market,” a post published on the DA’s Crimewatch site indicated. “The couple sometimes purchased stolen items at the store, and on other occasions took delivery of the items at other locations along John Fries Highway (Rt. 663) in Milford Township.”

The Facebook page for One Stop Health and Beauty Shop includes a post from late September showing items such as Axe men’s body spray on sale 2/$5 and Dove bodywash on sale for $3, which is significantly less than the regular retail prices for those items.

Police said they later recovered some of those items when executing search warrants at the Gills’ QMart store and at their County Line Road home.

Michael Gill allegedly said he knew since at least December 2018 that he had been purchasing stolen items, according to a criminal complaint filed in the case.

“He said he provided lists of items he needed to some individuals, and that at least one person from whom he purchased stolen items once remarked after being paid that they could now purchase methamphetamine,” the DA’s news release said.

Gill allegedly reported making between $2,500 and $5,000 each weekend in sales–including through the sale of stolen items–and buying about $1,000 in products from private sellers each week, according to the criminal complaint cited by the DA.

Denise Gill, who was the primary operator of the eBay business, allegedly told investigators that she’d cautioned her husband about paying people to steal items for resale after seeing a news story about the same practice, according to the complaint.

When asked about a link between drug addicts and the stolen items, the criminal complaint says Denise Gill allegedly remarked that many people at QMart are “crackheads” with “two teeth” and commented “that’s what crackheads do.”

Quakertown Borough Police and Bucks County Detectives were assisted in the investigation by loss prevention staff from Giant Food Stores, CVS and Target–who donated health and beauty products to be represented as stolen goods during controlled sales–as well as asset protection representatives from eBay, the DA’s office said.

The case has been assigned for prosecution to Deputy District Attorney Edward Louka.