The Saucon Valley Spirit Parade Committee has announced the name of this year’s parade grand marshal, and it’s one that should be familiar to most longtime borough residents.

This year’s grand marshal is Joseph “Joe” Delfoe, who at 86 is one of the senior members of Hellertown’s Mountainview neighborhood. In the late 1980s, Joe and his family also became well-known for spearheading the effort to construct the iconic clock tower in the borough’s Detwiller Plaza, which they maintained for many years afterward. 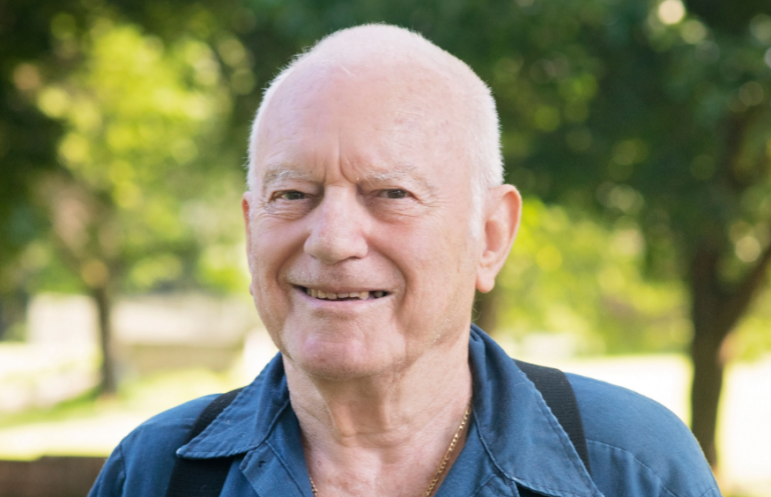 Joe Delfoe has been a resident of Hellertown’s Mountainview neighborhood–where he and his wife Eleanor raised their family–for nearly 65 years. A consummate volunteer, many Hellertown landmarks exist today thanks to his involvement. The most notable among them is the Detwiller Plaza Clock Tower, whose construction Delfoe spearheaded in the late 1980s. At 86 he remains active in his community, serving as vice chairman of the Hellertown Borough Authority Board of Directors.

According to a biography provided by the parade committee, Joseph Delfoe was born in Beaver Meadows, Carbon County, on Nov. 21, 1932 to Joseph and Mildred Delfoe. His family later moved to Bethlehem, where he graduated from Liberty High School in 1951. While at Liberty he met and dated his future wife, Eleanor Panik.

After high school Joe enlisted in the U.S. Navy and served on a destroyer escort, the USS Douglas Monroe during the Korean War. After returning from the service Joe went to work at Bethlehem Steel, and shortly after starting his new job he married Eleanor on Sept. 4, 1954. In April 1955 they bought a house in the Mountainview area of Hellertown and started their family. The Delfoes’ son, Jay, was the first born and was followed 17 months later by a daughter, Elaine.

Joe is an electrician by trade and when not working at Bethlehem Steel–and for a time with the Quakertown Public Works Department as a lineman–he would pick up additional electrical jobs. Joe would volunteer to assist the borough of Hellertown when they had electrical issues. While doing some of this work, he found the clock parts that were later used when the Hellertown Plaza clock was built.

Joe went to Borough Council and discussed the possibility of erecting the tower using the clock, which had ties to the Detweiler family. They were in agreement and the project began, with Joe forming the volunteer Hellertown Plaza Clock Association. He recruited many volunteers to raise the monies needed and then to erect the clock tower.

He went to Bethlehem Area Vo-Tech for ideas for the encasement of the clock, and the school held a student design contest, which produced the design that was ultimately used. The clock tower which today is one of Hellertown’s most beloved symbols was completed in 1987, after which Joe also took on the project of refurbishing the plaza fountain.

Joe’s next idea was to have volunteers’ erect towers and put lights up at the Saucon Valley High School football stadium. He went to the school board and they agreed to allow him to proceed with the project. He then formed a committee of volunteers to come up with fundraising ideas. Anyone who attended football games in the early 1990s likely remembers the sausage sandwiches and funnel cakes sold at the stand set up by the committee to raise money for the new lights. Joe also approached Bethlehem Steel and asked if they would donate the steel towers. He received permission to buy seven towers from the company for $1.00. He then got a construction company working on I-78 to donate tractor-trailers and drivers to move the towers to their new home at the stadium.

Many volunteers were involved with completing the lighting project. The first game with the new stadium lights was held in 1994.

Joe also was instrumental in getting the “wedding cake” fountain behind the Water Authority Building (in Borough Authority Park) back up and running after many years of disrepair.

The parade committee reported that Joe would like to thank all those who volunteered to make these projects a reality over the years.

Click here to read more about this year’s parade. Joe will be riding in a car provided by Star Preowned-Hellertown in the Dignitary Division at the start of the parade.