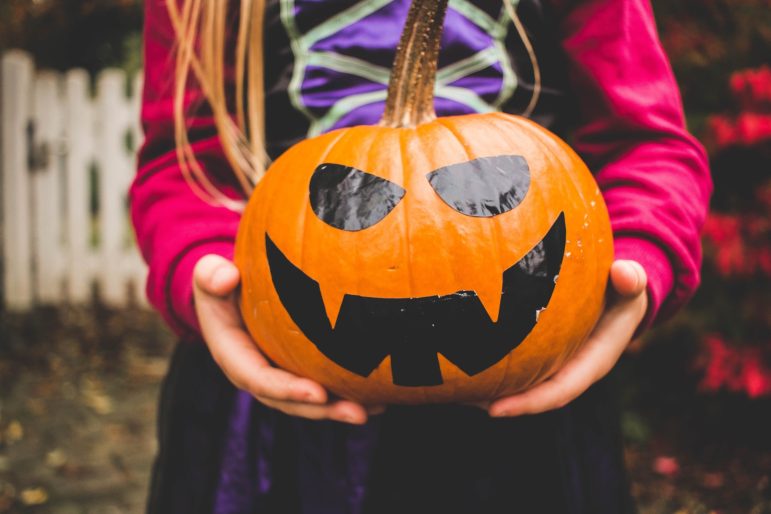 The theme of the 2019 Saucon Valley Spirit Parade is Halloween.

One of the biggest events of the year in the Hellertown area is this Sunday, Oct. 20, rain or shine. The Saucon Valley Spirit Parade marches off at 2 p.m. and once again it will feature a dazzling assortment of bands, floats, fire trucks and enough candy being thrown by the those who are in it to fill a swimming pool.

Also happening again is the Hellertown Post Office’s candy refill station, which was nearly canceled earlier this month due to a lack of donations. The Hellertown-Lower Saucon Chamber of Commerce and local businesses came to the rescue however, which means that participants who are throwing candy to spectators will be able to refill their buckets midway through the parade. If you would like to donate Halloween candy to the refill station, it is being accepted at the post office during their regular business hours.

The 2019 parade route is unchanged, beginning and ending at the Saucon Valley School District campus, where lineup will take place from 12:30 to 1:30 p.m. Parade participants should enter the campus via Polk Valley Road (turn at the McDonald’s on Main Street). For additional information about where to line up, please see the infographic below. 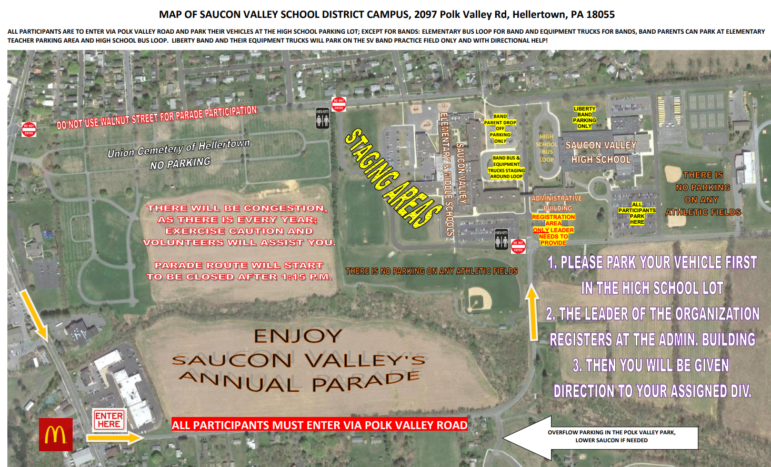 Residents who live along the parade route should note that the route needs to be cleared of all parked vehicles by 9 a.m. Sunday, and anyone traveling through Hellertown after roads are closed for the parade should expect to encounter traffic-related delays. 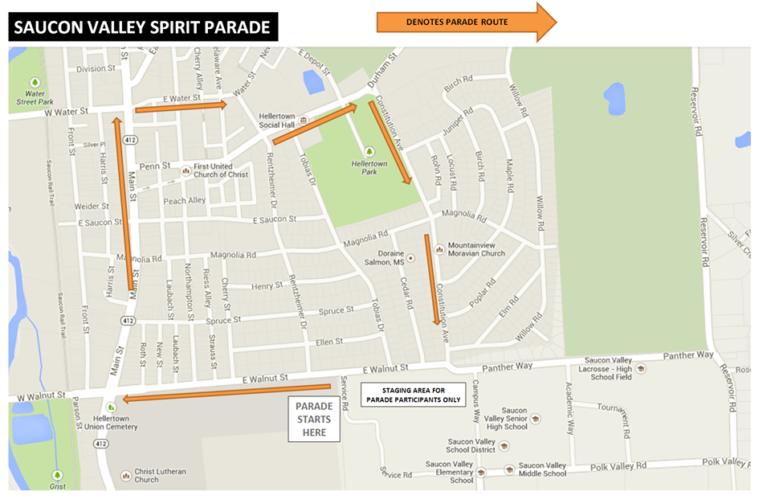 A map of the 2019 Saucon Valley Spirit Parade route in Hellertown, provided by the parade committee.

Note: The roads on which the parade is held will be closed to traffic and barricaded by 1:30 p.m. at the latest. Motorists traveling through the borough between approximately 1 and 3:30 p.m. should expect to encounter detours and delays.

This year’s parade theme is “Halloween,” and NEW for 2019, the judges’ stand will be located on the south side of the borough complex along Water Street, near Main Street.

Also new for 2019 are costumed judges. Janice Repnyek, Kimberly Verno Fleming and two other “mystery” judges–revealed Wednesday to be Lisa Johnson Scheetz and Kelly Kunsman–are excited to surprise you with their creative costumes. The Halloween fun is also for a good cause: a charity contest that will give Saucon Source readers the opportunity to vote for their favorite judge. Photos of the judges will be published in a poll on the site following the parade. The spirit parade committee and Saucon Source LLC have each committed to donating $100 to a charity chosen by the winning judge.

Spectators are also encouraged to arrive at the parade route early and in costume, because the judges will be surveying it to look for adults and kids to award “best costume” prizes to. A number of local businesses have donated prizes for the judges to award.

Service Electric Cable TV will be airing the parade on its Channel 2 and will have a staging area in the 300 block of Main Street where it will be filming.

This year’s parade grand marshal is longtime Hellertown resident, volunteer and the man behind the construction of the borough’s iconic Detwiller Plaza Clock Tower, Joe Delfoe.

Hellertown mayor and parade chairman David Heintzelman will announce the 2019 parade at the judges stand.

“As Mayor for the Borough of Hellertown, I want to thank the volunteers and citizens of Saucon Valley for supporting this yearly parade,” Heintzelman said in a letter this week. “Our goal is to provide smiles on every child’s face and show them that a small town with community spirit can engage everyone.”

The 2019 Saucon Valley Spirit Parade is funded with generous support from many donors and sponsors. Parade committee volunteers Nancy Zapotocki and Diane Chernaskey will also be walking the route to accept donations for the parade.

Note: Trick-or-Treat in Hellertown borough and Lower Saucon Township will be held Thursday, Oct. 31 from 6 to 8 p.m. (rain or shine). Participants are asked to leave their porch lights on. Parents are advised to accompany their children as they go around the neighborhood and should check all candy and treats prior to children eating them.