Hellertown wants to have its candy and it eat, too. But on its own schedule.

That message was heard loudly and clearly on the Saucon Source Facebook page after Postmaster Joseph DiRusso announced Monday that the candy refill station Hellertown’s post office was once again planning to host during this year’s Oct. 20 Saucon Valley Spirit Parade was being shut down due to a lack of donations. 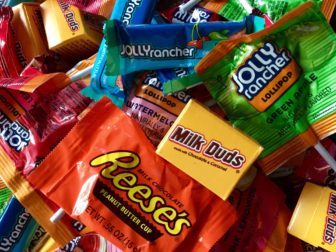 “It’s with a heavy heart that we have to cancel the Post Office refill station due to a limited donation of candy this year,” DiRusso said in a statement that was emailed to the press. “We have been promoting this since August and have received only 10 bags of candy. This is a fraction compared to last year’s 250 pounds of candy we received.”

The announcement triggered a fun size furor, with some residents saying they’d heard nothing about the need for donations until Monday while others said they knew all about the need, but hadn’t yet shopped for Halloween candy for various reasons.

“I know the candy has been in the stores since July, but that doesn’t mean everyone runs out to buy it,” commented Barry Stoneback Jr. “I think (canceling it) was a bit premature.”

“I don’t even buy my candy until next week or I’d eat it all,” agreed Melody Smith. “I think they should have waited until closer to Halloween.”

Kathleen Stadler Parsons suggested that a deadline for dropping off the donations be set, to help prevent similar goo goo clusters in the future.

For 2019, at least, the candy refill station will be full thanks to a commitment to donate 100 pounds of Halloween candy by the Hellertown-Lower Saucon Chamber of Commerce, which stepped in to the fray Monday evening.

“I stepped in on behalf of the HLSC to help support the refill station, as Joe is a board member, but the Post Office is a great community partner and a member of the Chamber,” said Jessica O’Donnell, Executive Vice President of Affiliated Chambers, Greater Lehigh Valley Chamber of Commerce. “I felt it was important to continue this tradition for the community and for the kids. I mean, who doesn’t love candy? Especially all you collect from a parade. Those are things I remember when being a kid.”

O’Donnell said she has so far recruited two local businesses as candy refill station sponsors. Brandon Wimbish of Farmers Insurance in Hellertown and Ashley Russo, owner of ASR Media Productions, will be donating candy, too.

More people are committing to donate on Facebook, and O’Donnell said she is confident that the candy refill station will again be a sweet success.

The idea for a candy refill station arose from the fact that traditionally many people who are in the parade and throwing candy to spectators run out about halfway through the route, which is in the area of the post office. Allowing them the opportunity to refill their bags and buckets there helps ensure that kids who are watching the parade along Rentzheimer Drive, Durham Street and Constitution Avenue won’t go home candy-less.

Candy that is donated to the refill station should be Halloween size, wrapped and unexpired.

To donate candy to the refill station, simply bring the bags to the Hellertown Post Office during business hours, which are Monday through Friday, 8:30 a.m. to 5 p.m., and Saturday, 8:30 a.m. to noon (holiday hours may vary).

The post office is located at 660 Delaware Ave., Hellertown.

This year’s parade will begin at 2 p.m. For more information, click here.