On April 21, 1969, Neil Armstrong had yet to walk on the moon, the hippie counterculture that would soon reach its zenith at Woodstock was in full bloom, and something important happened in Hellertown. That something was the opening of the borough’s new post office at 660 Delaware Avenue.

Fifty years later, the United States Postal Service is still serving customers from that office, where an anniversary celebration that included a ribbon-cutting with the Hellertown-Lower Saucon Chamber of Commerce was held Wednesday. 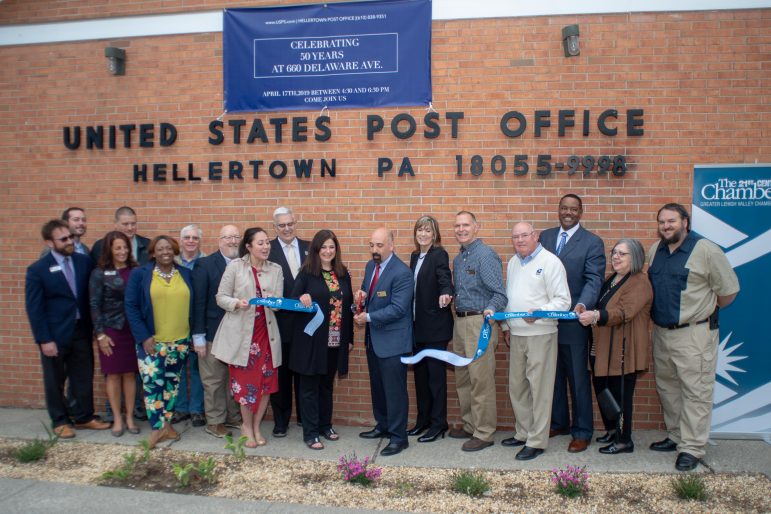 The ribbon is cut in front of the Hellertown Post Office, which is celebrating 50 years in its current location. At center are Hellertown postmaster Joe DiRusso and his wife, Lisa.

Hellertown postmaster Joe DiRusso welcomed dozens of attendees to the event, which also included refreshments donated by a number of local eateries and the chance to win a specially created ‘cache’ (commemorative envelope) with the post office building depicted on it.

The commemorative post office cache features an image of the Hellertown post office in the lower left corner of the envelope and a special stamp in the upper right corner. They are available for purchase at the customer service counter.

A limited number of these caches are available for purchase at the post office, stamped or unstamped.

DiRusso noted that although the current building is only 50 years old, the history of the United States Postal Service in Hellertown goes back nearly two centuries, to 1823, making it the oldest business still operating in the borough. 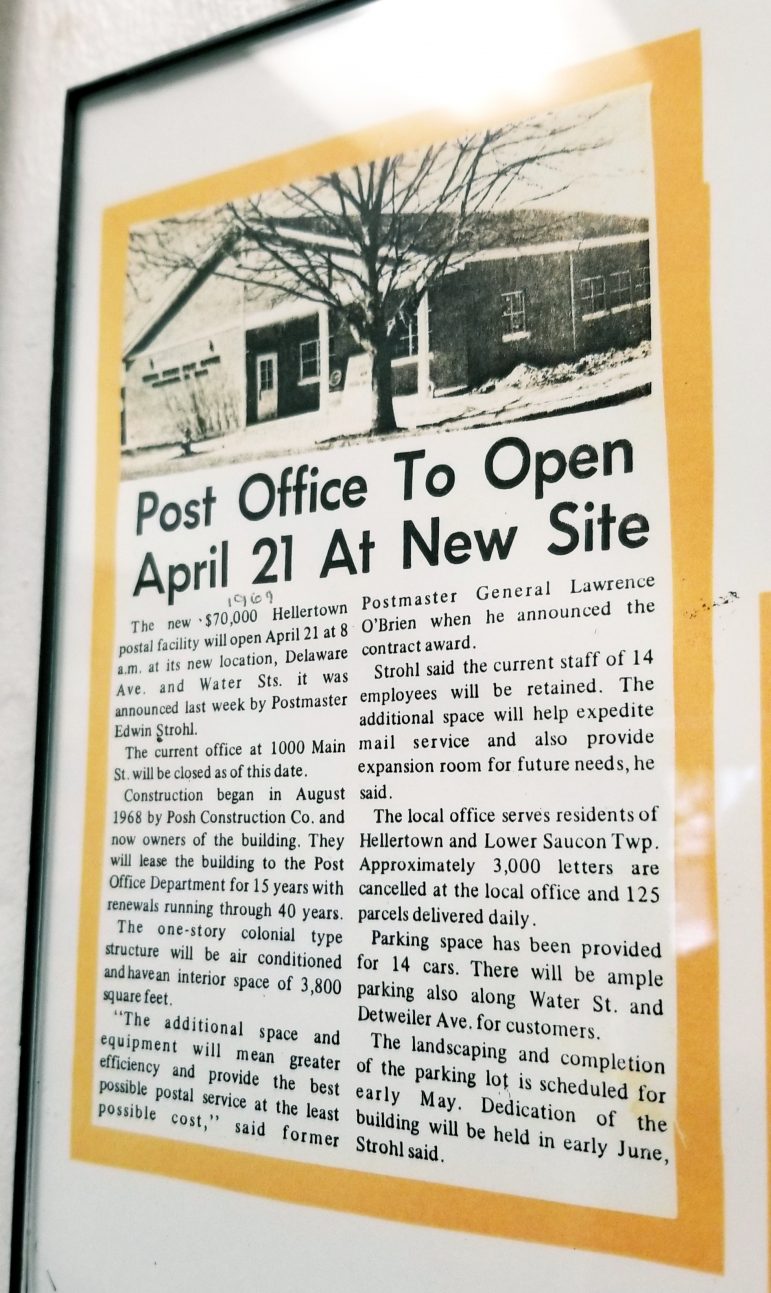 A newspaper story from April 1969 highlights the opening of Hellertown’s ‘new’ post office at 660 Delaware Avenue. This clipping is part of a post office history display in the Hellertown post office lobby.

Inside the post office lobby, DiRusso worked with Hellertown Historical Society member Bill Frey to create a display that documents some of the post office’s remarkable history in the borough through photos and memorabilia.

A rare photo of the original post office building–which stood along Main Street, approximately in the location where the Detweiller Plaza clock tower stands today–is one of many treasures unearthed and put up for display. 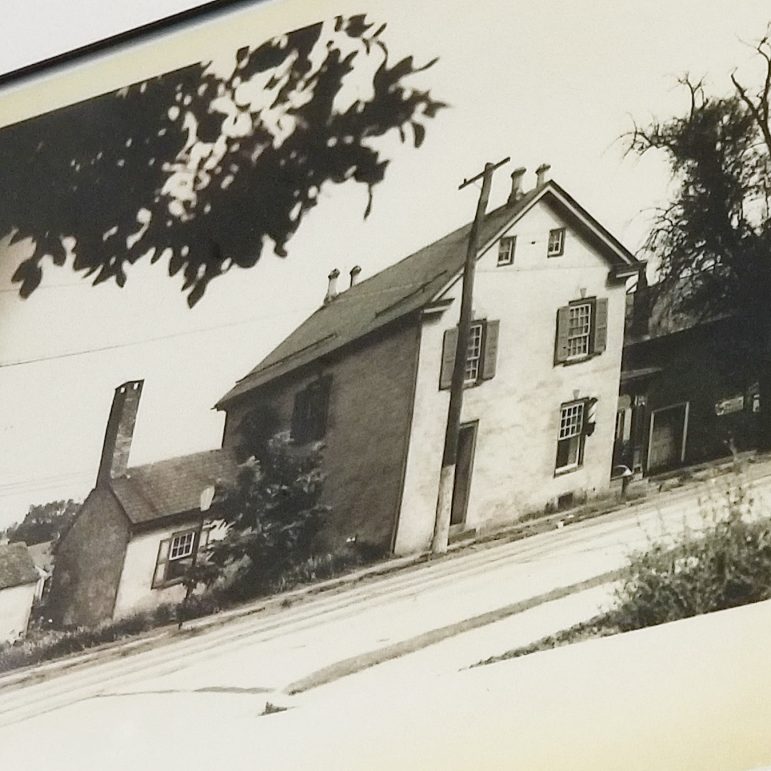 The original post office was housed in a two-and-a-half story building near the intersection of Main Street and Easton Road, where Detwiller Plaza is located today. It stood approximately where the clock tower stands today and the Weisel harness shop stood where the fountain now splashes. Both buildings were torn down for the creation of the plaza approximately 80 years ago.

Other locations that housed the post office over the years include the building that once housed Prosser’s Drugstore, and today is home to Advanced Optics; and the former St. Theresa’s thrift shop building at Main and Chestnut streets, which was destroyed by a massive fire in 2006.

DiRusso, who’s been the Hellertown postmaster for about 18 months, said Hellertown customers can expect positive changes to continue in the future.

Chamber Executive Vice President for Affiliated Chambers Jessica O’Donnell noted that the ribbon-cutting was her first in five years for a local post office. 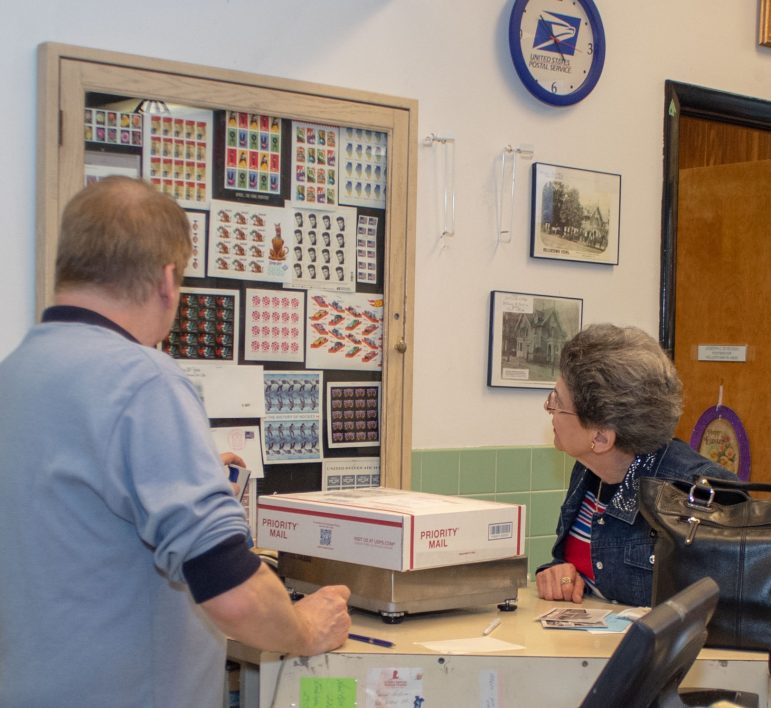 Some things never change. Choosing a stamp design is still a time-honored tradition at the Hellertown Post Office. 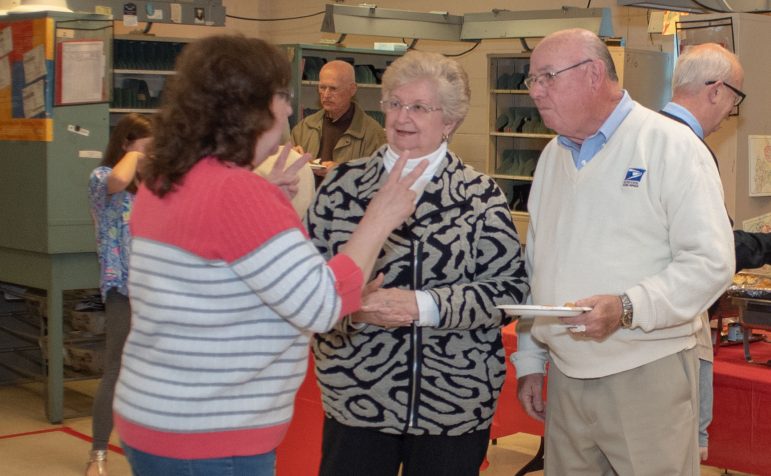 The anniversary event brought some former Hellertown postal employees back to the post office, where it was an opportunity to catch up with old friends. 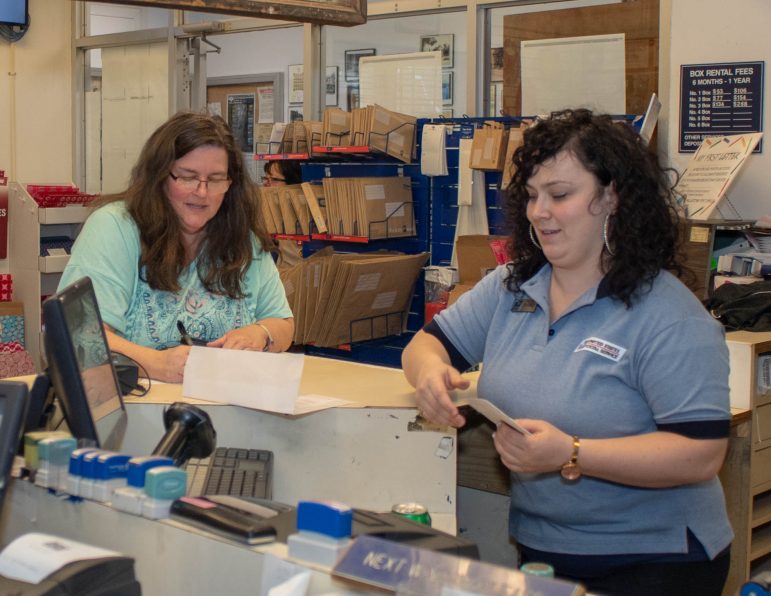 There was a party going on, but the mail also had to go on, and the customer service counter remained open while it took place. 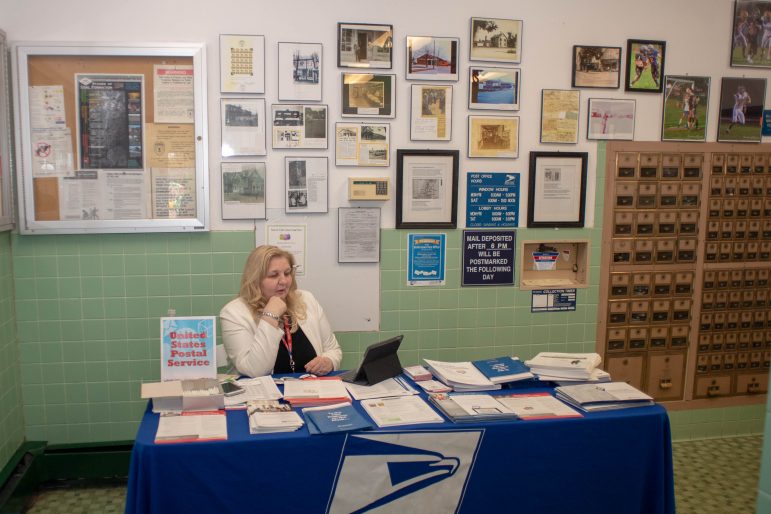 Information related to U.S. Postal Service products and services was available at a table in the lobby. Behind the table are the framed photos and memorabilia that are part of the Hellertown post office history display. 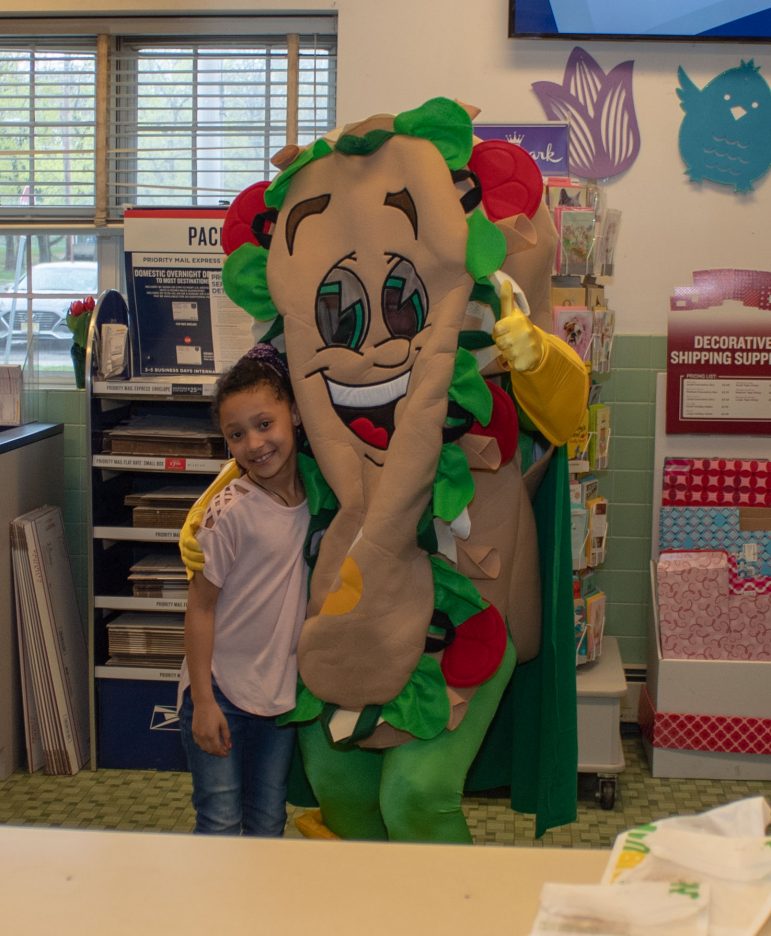 “Subman,” the Subway mascot, was a special guest at the post office anniversary celebration where guests enjoyed food provided by Subway and many other local eateries. 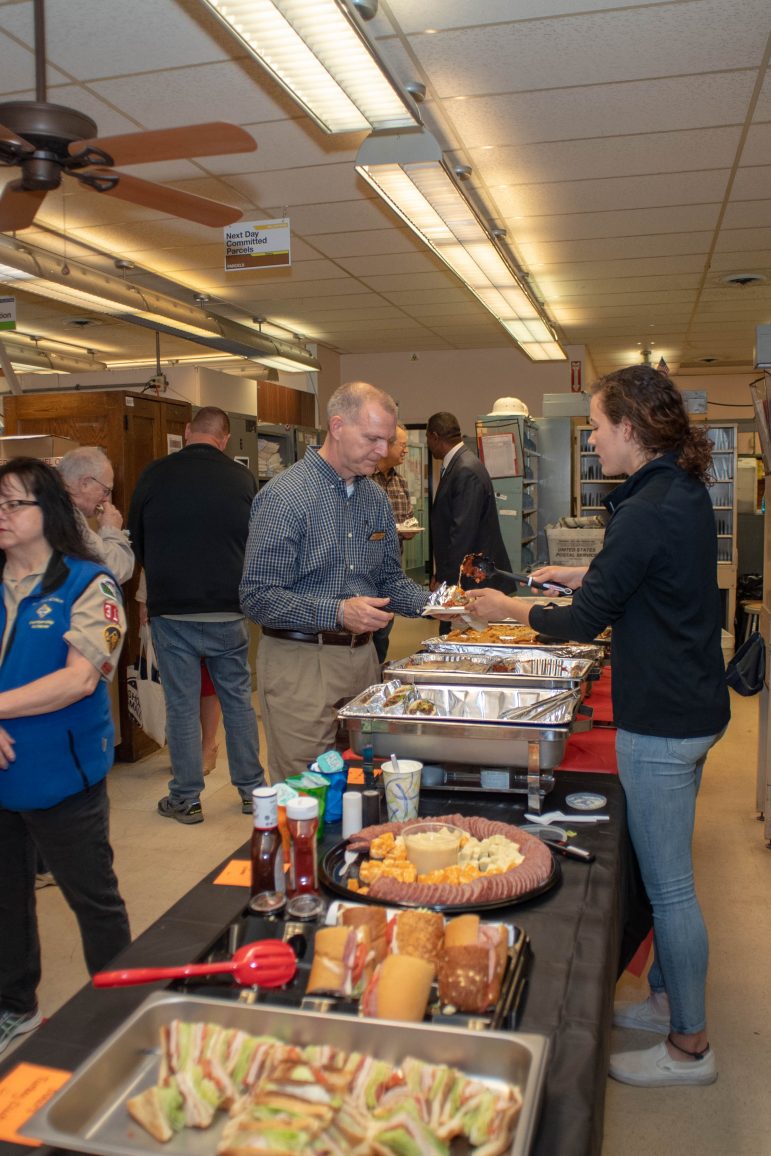 Hellertown Borough councilman Andrew Hughes stands in the hot food line, which was set up inside the post office’s back room. 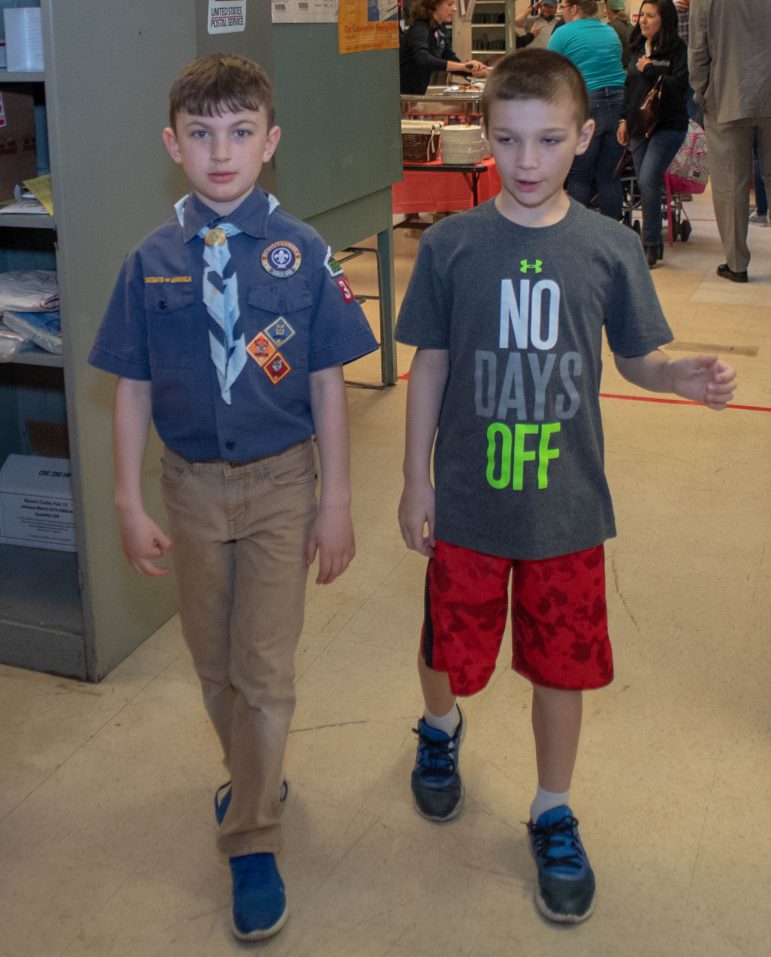 Local boy scouts participated in the anniversary celebration by leading the recitation of the Pledge of Allegiance outside in front of the Hellertown post office’s flagpole. 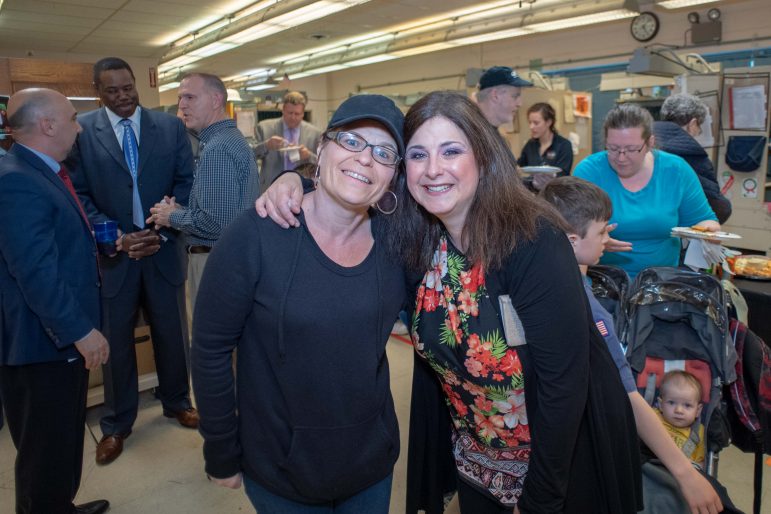 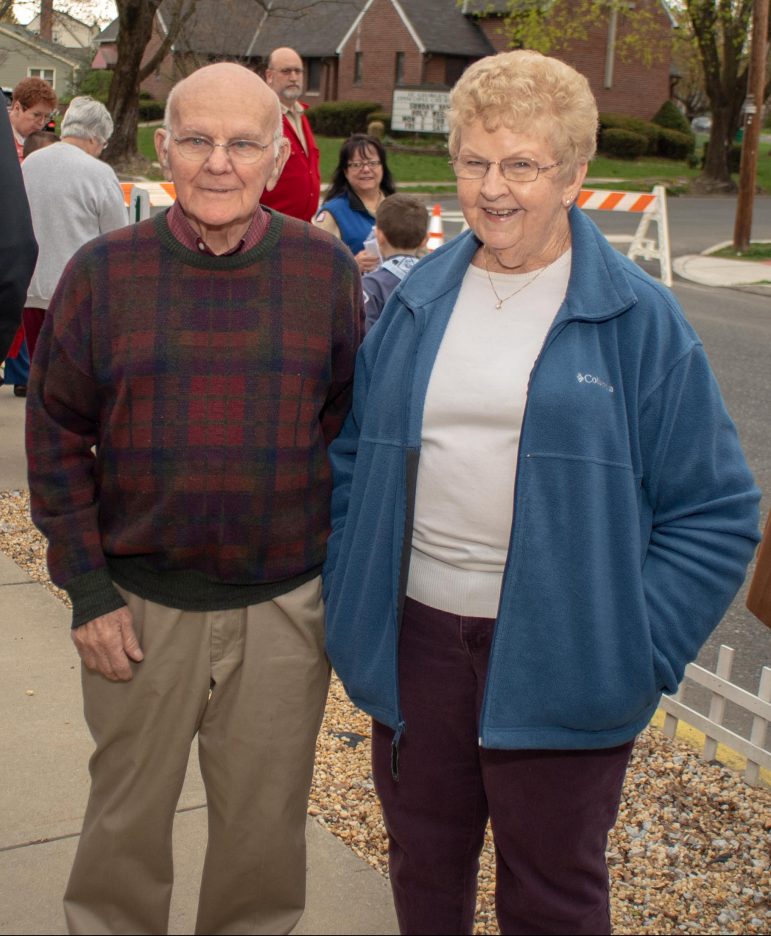 Former Hellertown mayor Richard Fluck and his wife Janice were there for the anniversary ribbon-cutting and celebration. 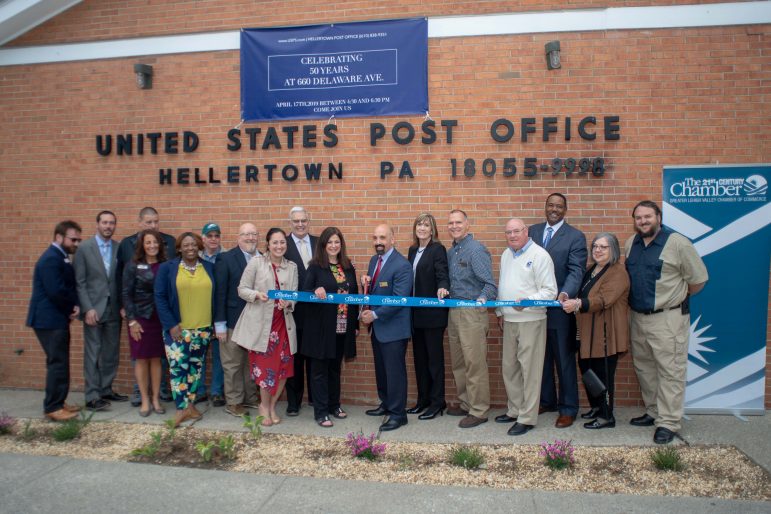 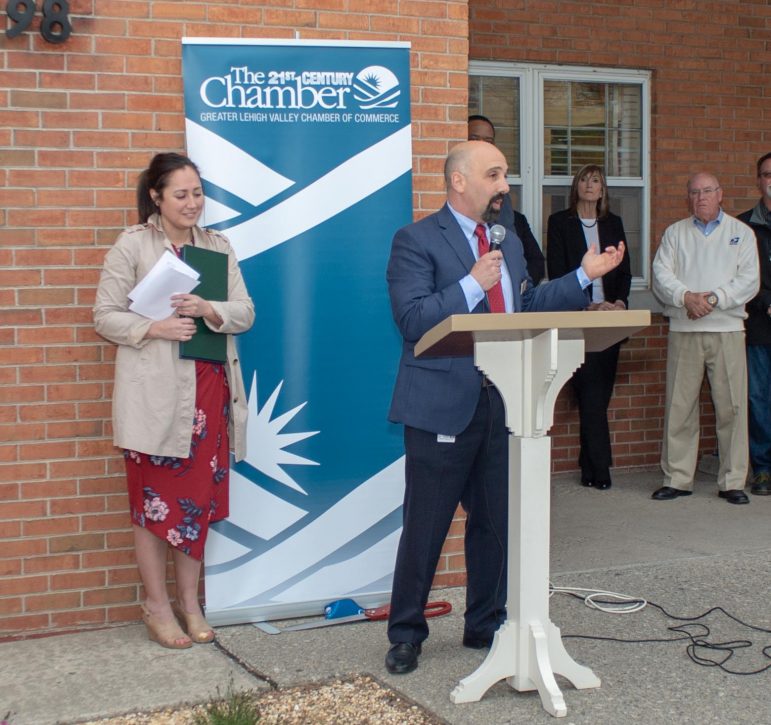 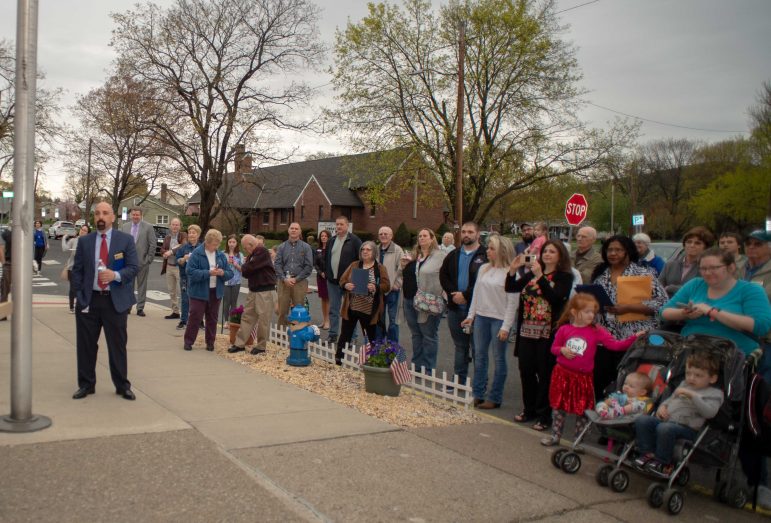 A section of Delaware Avenue in front of the post office was closed for the special celebration, which began at 4:30 pm Wednesday. 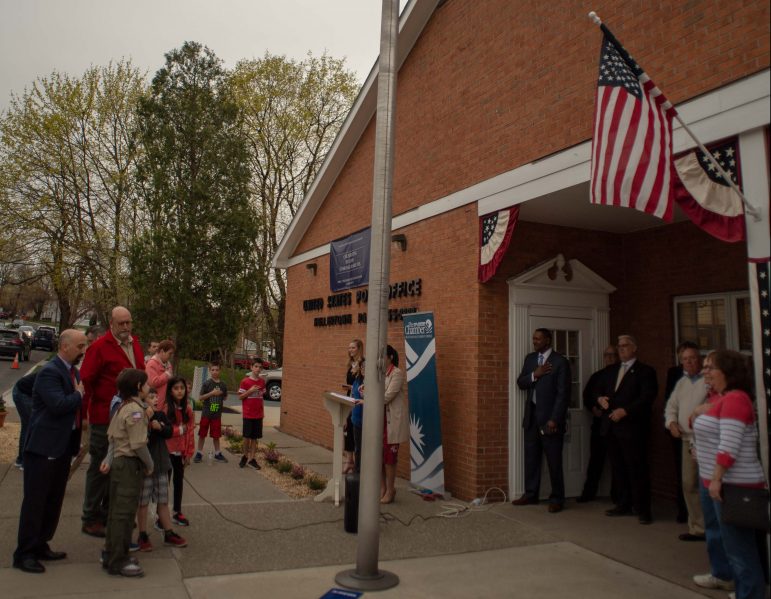 Local Boy Scouts lead the recitation of the Pledge of Allegiance. Outside of work postmaster Joe DiRusso has been extensively involved with local scouting for a number of years. 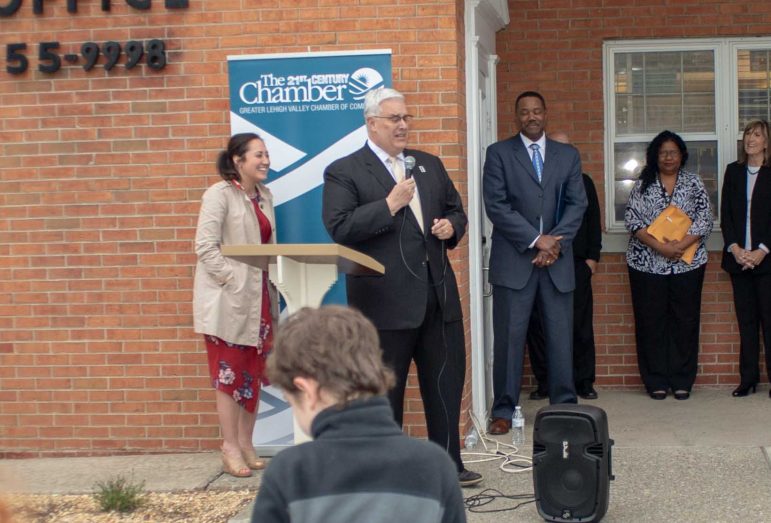 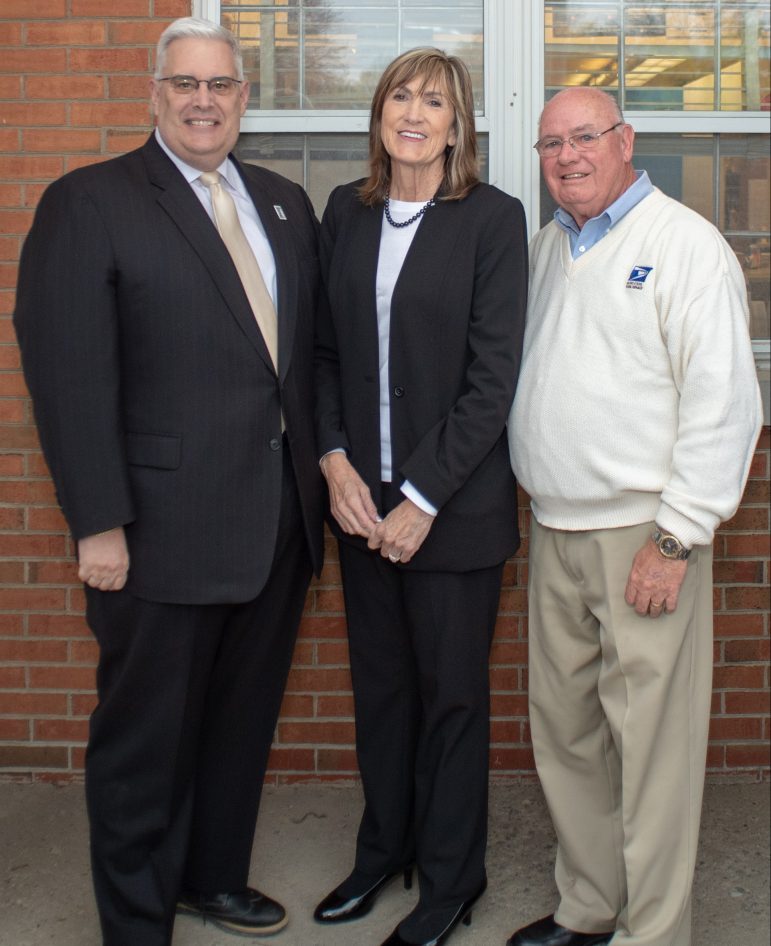 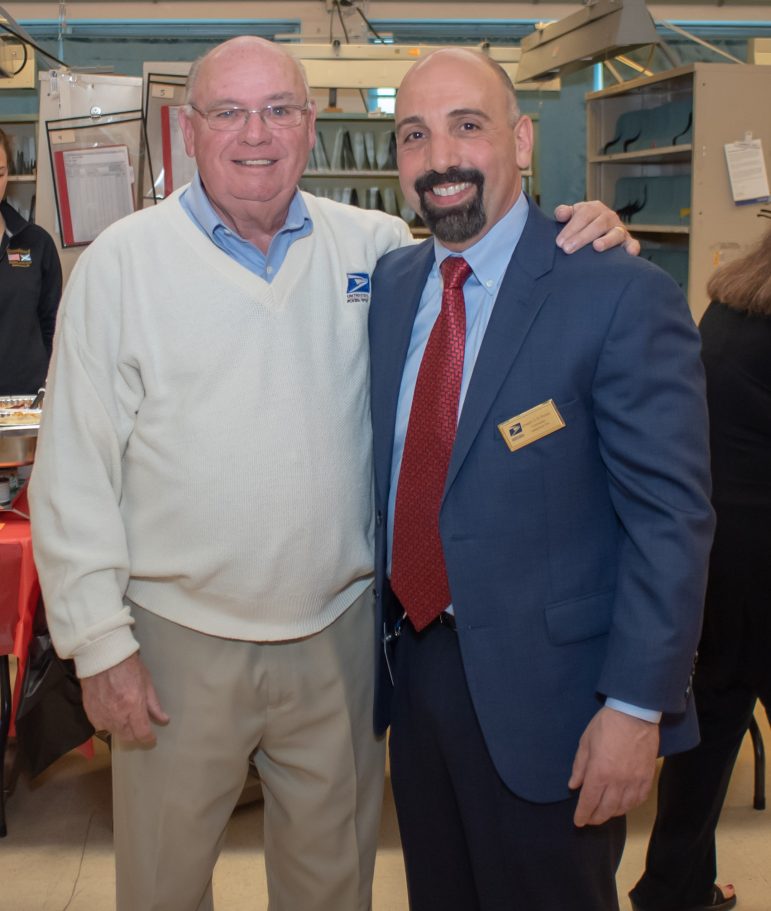 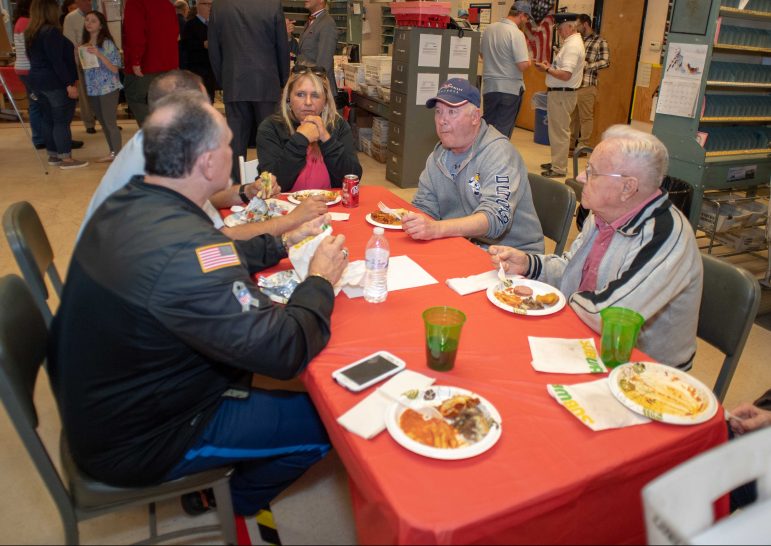 The ribbon is cut in front of the Hellertown Post Office, which is celebrating 50 years in its current location. 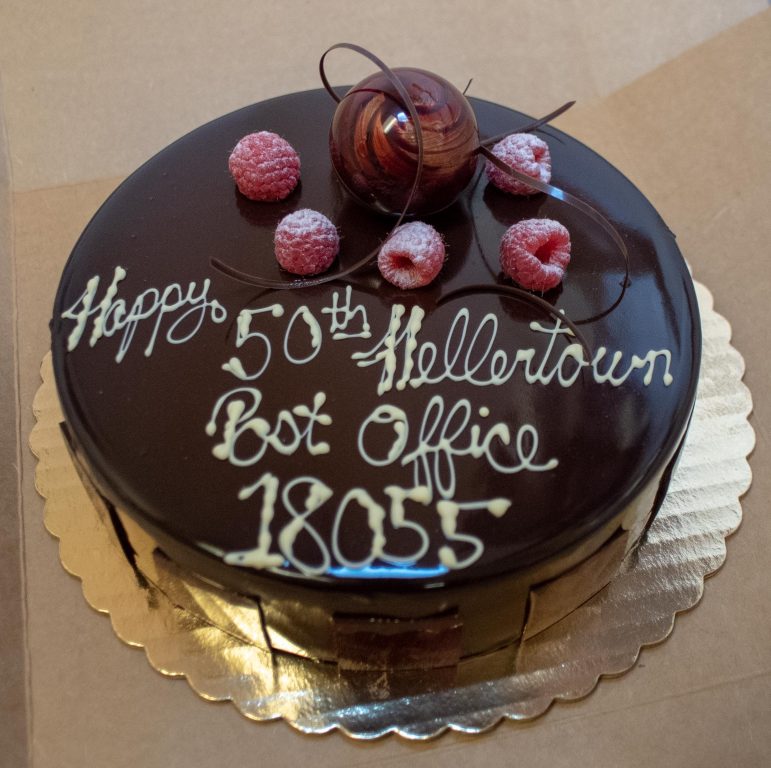 A cake by Hellertown’s Dolce Patisserie was made to commemorate the special occasion. 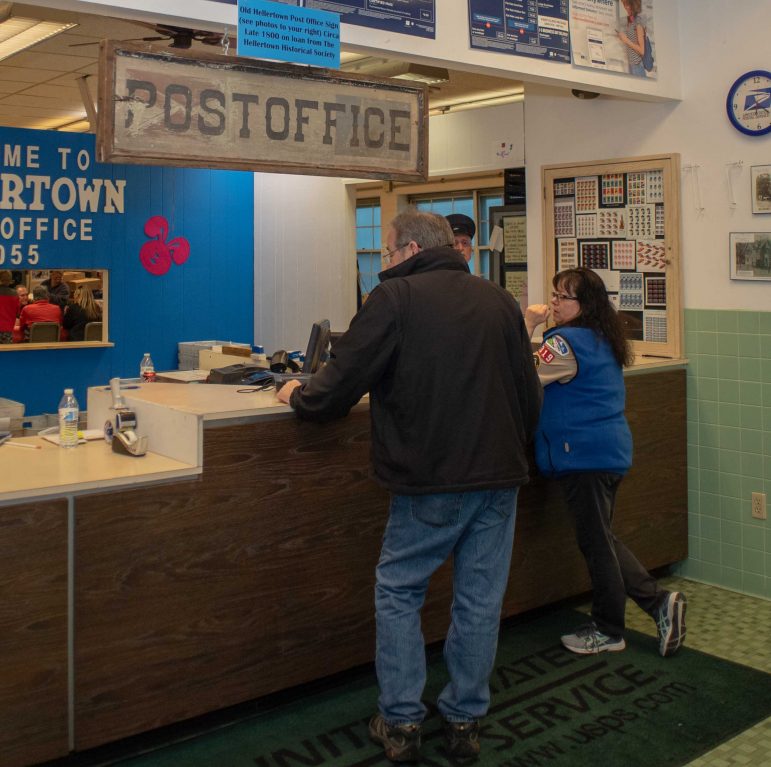