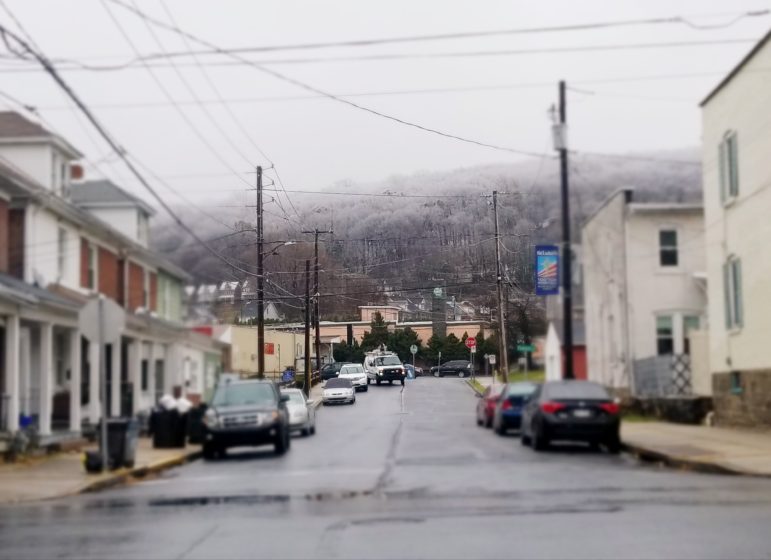 The intersection of N. Clewell and Cherokee streets is one of the lowest points in Fountain Hill borough. A landlocked municipality bounded by steel hillsides, the tiny borough has a large bill to pay as part of the federally-mandated MS4 stormwater mitigation program. Most of the responsiblity for paying that bill will fall on borough property owners in the years to come.

It’s probably not something for which most municipalities would prefer to be known as trailblazers, but in the case of Fountain Hill borough, economics and geography are dictating that officials be proactive in introducing a new stormwater management fee system.

The system of fees–one of the first in the area–will be managed by a recently-created municipal stormwater authority in order for the borough to remain in compliance with the dictates of MS4, which is the nickname for the Municipal Separate Storm Sewer System program. That program is in turn part of the federal government’s Clean Water Act, which became law in 1972. (For more information about the history of MS4 in Pennsylvania, click here.)

All local municipalities will eventually have to comply with the mandates of an MS4, although as Fountain Hill Borough Council President Leo Atkinson explained it, the burden for doing so is falling and will continue to fall harder on urbanized communities.

Fountain Hill currently has an EPA permit that gives it two more years to come into compliance with its requirements under its MS4, which have a price tag of approximately $700,000.

That’s a large amount of money for a small landlocked borough with little industry, not much commercial development, an aging population and a real estate tax rate that’s already the highest in Lehigh County.

The borough’s high tax rate is one of the reasons officials opted to create a municipal stormwater authority, which is overseen by a five-member board made up of two council members–Atkinson and councilwoman Annamarie Jordan–and three community members. Those individuals are Patrick Figueroa, who is president of the new authority board; Kelsey Morrison, who is vice president; and Tom Lansek, who is secretary.

The board’s next meeting will be held Wednesday, Dec. 11 at 7 p.m. at Fountain Hill Borough Hall, 941 Long St., Fountain Hill. Its meetings are open to the public.

The board has quite a bit of work ahead of it, which Atkinson said will include educating the community about the new fee system; a system that is based on property assessments that have already been performed.

Each property owner will have to pay an annual stormwater fee calculated based on the amount of impervious surface on their property. Impervious surfaces include the footprints of any structures, paved surfaces, in-ground swimming pools, and so on.

““Right now the fee range that we’ve been talking about is somewhere between $20 and $30 per 500 square feet of impervious surface, and that’s an annual fee,” Atkinson said, adding that property owners will have the right to appeal their fee assessments once they are notified of them.

Since most of the lot sizes in Fountain Hill are small, the average homeowner will likely be assessed an annual fee that’s somewhere between $60 and $120, he explained.

Nonprofit organizations that own property in the borough–notably St. Luke’s University Health Network, which owns approximately 50 percent of the land in Fountain Hill–are not exempt from inclusion in the assessment-based fee system. However, Atkinson noted that although the hospital will have the largest single fee assessment of any property owner in the borough, “the residents together are paying the vast majority” of the $700,000 bill.

Residents will also have the opportunity to apply for and receive credits to reduce their fees by installing things like rain barrels and green roofs or planting trees. The maximum annual credit amount is $40, Atkinson said.

There is pressure on borough officials to roll out the program because with the permit the borough currently has, “we have to reduce our runoff by 10 percent of what they’ve estimated it to be by 2022,” he explained. If that doesn’t happen, the borough could be fined as much as $30,000 per day.

To learn more about the MS4 program and how it will affect them, residents should plan to attend the next stormwater authority board meeting.