Note: This story has been updated with a statement from Saucon Valley School Board president Shamim Pakzad.

In response to public remarks Pakzad made last week denouncing Roy’s characterization of some parents who send their children to charter schools as racist or classist, the Bethlehem Area School Board voted Monday to send a letter to the Saucon Valley School Board requesting that Pakzad be publicly censured, questioning his ethics, accusing him of having a personal agenda and requesting that he obstain from any future votes involving funding the operations of the Lehigh Valley Academy Regional Charter School, the Morning Call reported Monday. 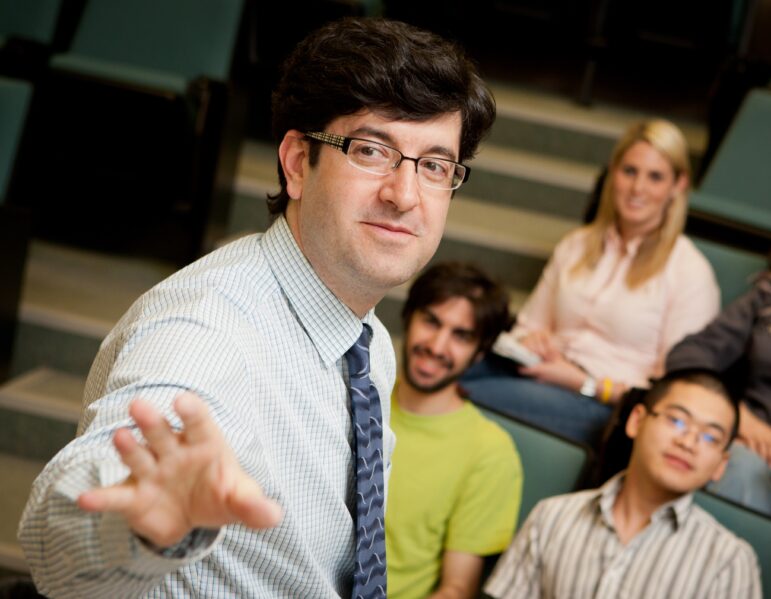 Saucon Valley School Board president Shamim Pakzad was elected to the board in 2017. He is shown teaching a class at Lehigh University in this file photo.

Pakzad said at the meeting last Tuesday that his son attends that school (another son attends Saucon Valley), and that he was upset by Roy’s remarks, which Pakzad called “a new low” in a brief speech in which he also said Roy should apologize and resign.

The Morning Call reported that Bethlehem Area School Board president Michael Faccinetto said Pakzad has the right to have a personal disagreement with Roy, but shouldn’t have used his position as school board president as a pulpit for his criticism.

“It is completely inappropriate and unethical for an elected member of a school district board to call on the superintendent of another district to resign over a clearly personal grievance,” the newspaper quoted Facinetto as saying in the letter, which was read at the meeting. “… He has no right to use his access to the dias to attack another superintendent.”

Pakzad–a Lehigh University professor–has been a Saucon Valley board member for two years but has only been school board president for two weeks, having been appointed to the position at the board’s annual reorganization meeting Dec. 3. He previously served as school board vice president.

He issued the following statement Tuesday afternoon in response to the report about the Bethlehem school board’s decision to mail a letter requesting his censure.

I have been purely focused on the statement by the superintendent that parents choose to go to charter school to avoid having their kids be with poor and minority students. The fact remains that LVA at 35 percent white student population has more minority students than either BASD (41 percent white) or SVSD (83 percent white), so if a parent is trying to avoid having their kids be with black and brown kids, sending them to LVA will not achieve that, it achieves the exact opposite. Similar statistics exist for Allentown and Philadelphia, too. Philadelphia public schools are 14 percent white, while brick and mortar charters in the city are only 13 percent white.

I believe race has been an ailment in our society for centuries which has harmed millions in significant ways and continues to do so. That is why we teach our kids to confront it and not tolerate it. Using racial accusations for political expediency is just wrong, it chips away at the consensus that is built in this country against racism.