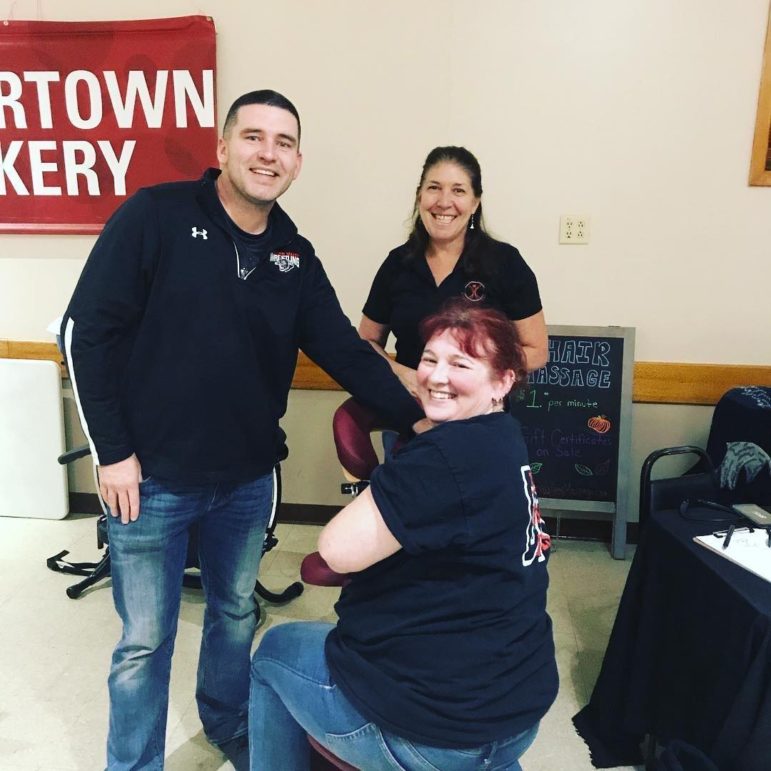 Westley Morris (left) and Joanne Robbins (standing) are co-owners of Saucon Valley Massage Therapy in Hellertown, which Robbins opened in 1990. The business is celebrating its 30th anniversary this month. (Contributed photo)

After 30 years in business, Joanne Robbins, founder of Saucon Valley Massage, still “has the gift of therapeutic touch,” says her son Westley Morris, who joined his mother in their family’s business three years ago to help put her ideas to revitalize, rebrand and rename Saucon Valley Massage into action.

Robbins, who was born in Bloomsburg, Pa., and worked her family’s farm, is used to working hard and working with her hands.

“I used to have to pick up stones in the fields, and now I use stones during a hot stone massage,” she said. Robbins says working hard is part of her character, and having worked on a farm she had a “be your own boss kind of upbringing.”

While driving past what was then a former bank on Main Street in Hellertown several decades ago, Robbins noticed that the building was for sale by its owner, and instinctively knew “that was it.” 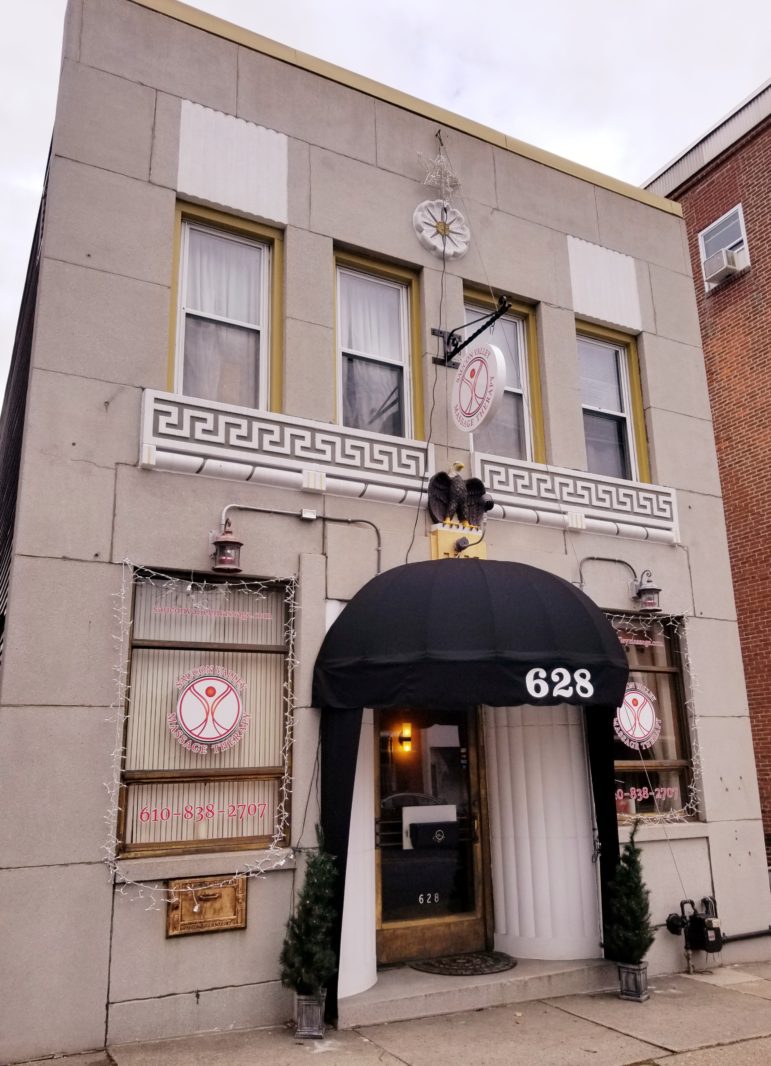 Saucon Valley Massage Therapy at 628 Main Street in Hellertown has been helping Saucon Valley residents live their best lives since 1990. Under the ownership of the mother-and-son massage therapy team of Joanne Robbins and Westley Morris, the business has flourished.

She contacted George Heilman, the owner of the Saucon Valley Savings & Trust building, and told him what her plans were for the former bank. They went through the building, which needed a lot of work, and after negotiating its sale Heilman held the mortgage while Robbins slowly built her business, one room at a time.

“I probably wouldn’t have gotten it from a regular bank, being a mother with two small children. I told him what I was going do and he said good luck,” she recalled. “His wife Carol also encouraged me. They encouraged to keep trying, keep believing in myself, keep doing what you’re doing. George was my first customer and we’re all still friends today.”

Robbins revealed that she’s had high and low points throughout the past three decades as an entrepreneur.

From 1990 through 2012, she was the massage therapist for the Philadelphia Eagles football team. That relationship began when former Eagle Jeremiah Trotter first came in during a visit Hellertown. After receiving his first massage from Robbins, Trotter went back to the athletic trainer for the Eagles, Rick Burkholder, singing her praises. Burkholder then contacted Robbins to connect her to work with his players.

Robbins recalled the exhilarating feeling of walking into the stadium in Philadelphia, where she worked every Friday for a year on the Eagles players. She credits her own great team who held down the fort at Saucon Valley Massage with her being able to travel to Philadelphia for a year.

“I had a great team here,” she said. “This blew my mind. I worked on Donovan McNabb in the morning and came home and worked on a PeeWee football player that same night.”

At her lowest point, Robbins recalled the devastating Hellertown Flood of 2004, which heavily damaged downtown businesses including her building, leaving her homeless for a time. With help from her two children and the Saucon Valley community, they were able to clean up and repair damage from the flood and keep the business going.

When asked about the biggest highlight of her 30 years as a massage therapist, Robbins said it has been having her son Westley working side by side with her for the past three years. She has the same belief in him that the Heilmans had in her when she first began massaging.

Robbins’ legacy that she wants to leave for her family is, “Believe in yourself, count your blessings and practice gratitude.”

She expressed gratitude for every person who has come to Saucon Valley Massage over the years.

“You’re not just a number here. You’re family,” she said. “It’s about the relationships–that’s how I am. I really want to understand what problems there are and how I can help.”

Robbins regular question to her customers is “What is it I can do for you today?”

In addition to celebrating its 30th anniversary, Saucon Valley Massage is currently running its annual Valentine’s Day Special. For every couples massage booked through Feb. 15, each couple will receive two (2) free Valentine’s Day cupcakes from Hellertown Bakery, free aromatherapy, free hot towel and a special envelope to be brought back between the months of April and August to find a surprise discount inside. Prizes within the envelope range from $10 off a massage to a one-hour free massage.

Saucon Valley Massage Therapy is located at 628 Main Street in Hellertown, Pa. The business is open from 10 a.m. to 8 p.m., Monday through Saturday.

Appointments can be made online and more information about massage and other available treatments can be found on the Saucon Valley Massage Therapy website.