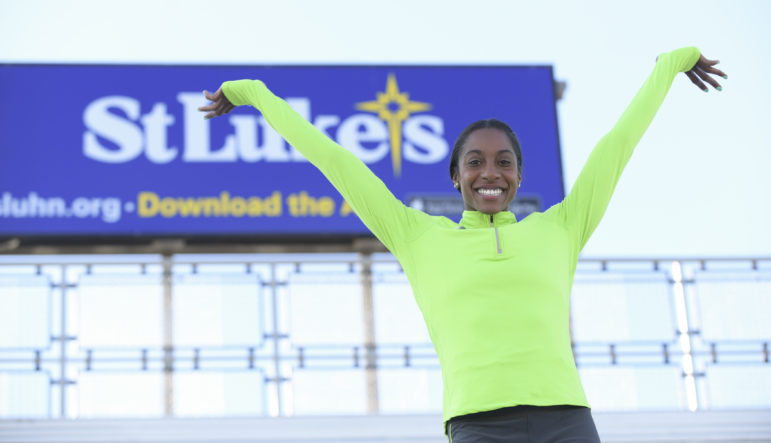 Homegrown Olympic hopeful Chanelle Price is a fitness advocate for kids as part of her role as a St. Luke’s Sports Ambassador.

Offering running tips and encouragement to the boys and girls who look up to her comes as naturally to U.S. Olympic hopeful Chanelle Price as running itself.

“I started track at a young age, and any way that I can give back, whether it’s helping a kid with their form or talking with someone and trying to motivate them, I just love it,” said Chanelle, an Easton native and gold medalist in the 800 meters at the 2014 IAAF World Indoor Championships.

Chanelle will have plenty of opportunity to give back as a St. Luke’s Sports Ambassador.

“She’s going to be an ambassador for our Fit For Life program,” he said. “Obviously having a world champion track and field athlete and Olympic hopeful out there motivating and inspiring young people to be physically fit is incredibly exciting for St. Luke’s. We are especially excited about her ability to encourage young women to engage in physical activity in the sport or activity they love, or just adopt a healthy and Fit For Life lifestyle.”

Price said she is thrilled to advocate for healthy activity in the Lehigh Valley and beyond.

“I’m from Easton and my family lives here,” she said. “Any way I can give back to the Lehigh Valley is important.”

Price is currently living in Eugene, Ore., while preparing for the U.S. Olympic Trials in late June and training with other world class athletes from around the globe, but will use her social media presence to alert the Lehigh Valley–as well as her fans from around the world–about the importance of leading a fit and healthy life. That includes sharing things like a video series with St. Luke’s called “Doing the Small Things Right,” which focuses on often overlooked aspects of healthfulness, such as nutrition and sleep.

“As a St. Luke’s ambassador, I will be taking everyone along on my journey of what it looks like to train and prepare for something as big and important as the Olympic Games,” she said.

Price, 29, has a personal-best of 1:59.10 in the 800 meters. In 2008, she ran at that time what had been the second best-ever 800 for an American high school runner and was selected as Gatorade’s High School Player of the Year.

She also competed as a Nike pro athlete on the prestigious international Diamond League circuit of World Athletics that features the top track and field athletes in the world.

“The Easton community and school district have formed a great partnership with St. Luke’s, and that was very important to Chanelle,” Hauth said. “Having someone like Chanelle who is homegrown and such a big part of the Easton community showcases our relationship with the community.”

Chanelle is one of three female Olympic hopefuls representing St. Luke’s as community ambassadors. The others include Mandy Marquardt in track cycling and Jillian Seamon in weightlifting.