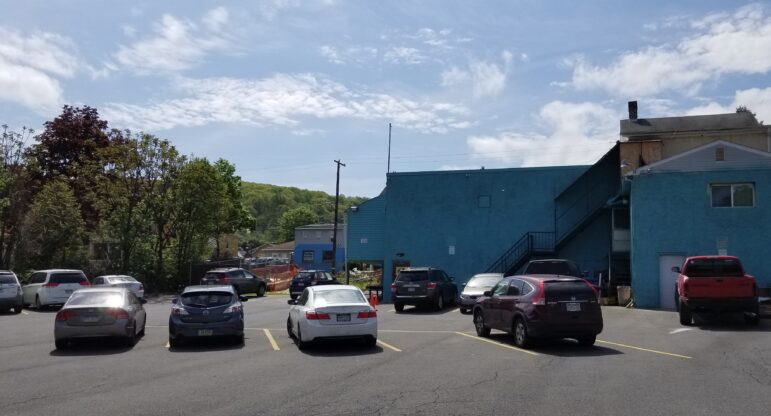 Cars fill the parking lot of Iglesia Evangelica Jehova Jireh, which holds Bible study and services several times a week. The church is located in the 1100 block of Broadway in Fountain Hill.

Although religious gatherings are permitted under industry guidance for Pennsylvania governor Tom Wolf’s stay-at-home order, services held in-person are go against state recommendations put in place in March to help stop the spread of the novel coronavirus, which health officials say can easily be spread from person to person in group settings.

“Religious leaders are encouraged to find alternatives to in-person gatherings and to avoid endangering their congregants,” the governor clarified in early April, as many congregations contemplated canceling their Easter services or moving them online. Most ultimately did the latter.

“Individuals should not gather in religious buildings or homes for services or celebrations until the stay at home order is lifted,” Wolf said.

Following the state’s recommendation has been trying for many people of faith, however.

And now at least one Fountain Hill, Lehigh County congregation faced with the difficult choice is apparently choosing not to heed the state’s advice against in-person services. 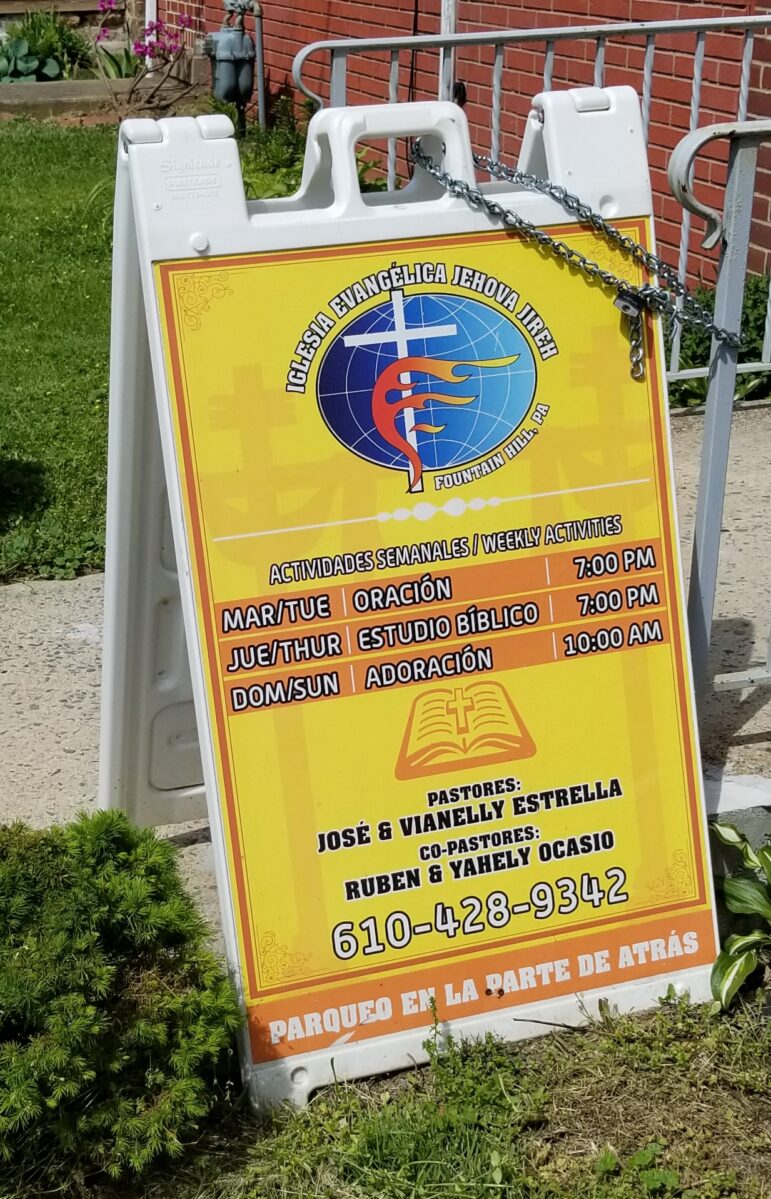 A sign in front of the church advertises its Sunday worship service to passersby. The church is located in a pedestrian-friendly area in which many residents are bilingual.

Iglesia Evangelica Jehova Jireh, located in the 1100 block of Broadway, has held services with congregants present for at least two weeks in a row.

It is not the only Pennsylvania church to do so. U.S. News & World Report reported earlier this month about a church in Ebensburg, Cambria County, that held services for approximately 25 parishioners and against the advice of local authorities. In Cambria County as of Sunday there were 54 confirmed cases of coronavirus, compared with 3,470 in Lehigh County, where the rate of COVID-19 infection is approximately 25 times higher.

On Sunday morning, during a service being held inside the building, 17 cars could be seen parked in its lot at one point. On May 10, about a dozen cars were parked in the lot.

One parishioner Sunday could be seen walking to the church along Broadway, face mask in hand, and music coming from inside the church was audible on the streets around it.

Another church a block away was also holding a service at the same time, although only a few cars were parked in its lot and the service was being broadcast on its Facebook page.

The last service broadcast live on its Facebook page by Iglesia Evangelica Jehova Jireh was streamed on Sunday, April 19, according to the page’s timeline. 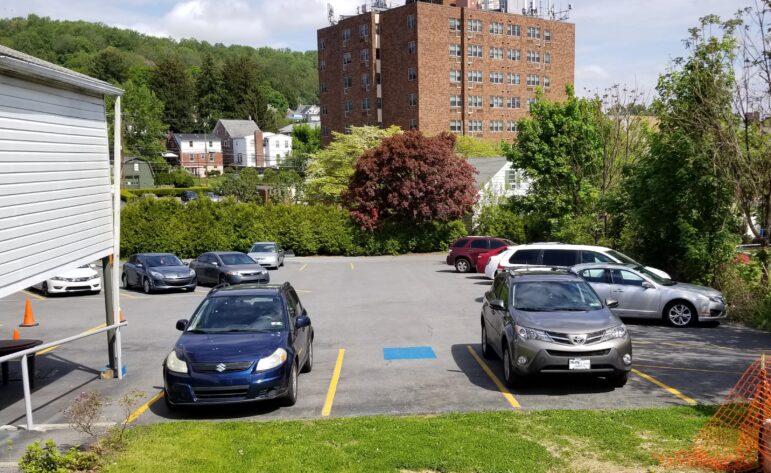 The parking lot was partly full during Sunday’s service. Religious institutions are permitted to hold in-person services in spite of the strict limitations the state has imposed on many other aspects of daily life, however Gov. Tom Wolf has said they should not hold them at this time. Instead, the guidance from the state recommends utilizing alternative forms of worship.

It’s not clear how many congregants were inside the church Sunday, however the number of vehicles suggested it was likely more than 10–the maximum number of people allowed to gather in one place under the current “red” phase of the state’s stay-at-home order, which is still in effect in Lehigh County.

When groups gather, social distancing guidelines mandate that individuals stay at least six feet apart, and face masks or face coverings are required by the state unless a medical condition or age (in the case of small children) is an impediment to wearing one.

Today, I announced that these 12 counties will move from the red phase to the yellow phase of reopening on Friday, May 22:

On Sunday, several pieces of personal protective equipment–including disposable gloves and a discarded face mask–littered sidewalks near the church and the parking lot behind it; PPE that could potentially be contaminated with the virus that causes COVID-19.

A discarded latex glove sits at the edge of the parking lot behind Iglesia Evangelica Jehova Jireh in Fountain Hill, Lehigh County. Discarded personal protective equipment has been a growing problem during the COVID-19 pandemic.

“I know that Pennsylvanians are strong, resilient and care about their families, friends, neighbors and community, including their religious communities,” Wolf said last month in announcing his guidance for religious institutions, which included a suggestion to hold services online. Many local churches have since adapted to the unique challenges presented by the pandemic with the use of technology applications like Zoom and Webex.

“We must all continue to do our part to stop the spread of this deadly virus,” Wolf said.

Recently, however, there has been growing resistance to “doing one’s part” both locally and statewide, although medical evidence shows it has helped to mitigate COVID-19’s spread. On Friday, state health secretary Dr. Rachel Levine tweeted that “the rate of infection has been declining over the last 14 days across the state,” while warning that “as counties move to yellow, we still have to be careful and continue our efforts.”

Rallies have recently been held in Harrisburg by individuals and elected officials who have denounced the restrictions as over-reaching or even unconstitutional, a local lawmaker told Wolf that Lehigh and Northampton counties should be reopened more aggressively and some business owners throughout the state–including the owner of a North Whitehall Township tattoo shop–have openly defied the business shutdown.

In Hellertown, hundreds of residents are clamoring for the borough’s pool to open this summer with restrictions in place, even though doing so now would violate the current limit on public gatherings; a limit in effect in Northampton Lehigh and other hard-hit counties until June 4. Even if the Lehigh Valley is moved to the yellow phase of the plan before early June, attendance at gatherings would still be capped at 25 people, which is likely far fewer than the number of guests needed for the pool to be profitable if it opens.

As of Friday, per the Lehigh County coroner 10 Fountain Hill residents had died from COVID-19, out of nearly 200 county-wide. Lehigh County had confirmed nearly 3,500 cases of the novel coronavirus, or approximately one case for every 100 hundred residents. The county has the third highest COVID-19 incidence rate in the state, after Philadelphia and Delaware counties.

For more information about COVID-19, visit the PA Department of Health website. 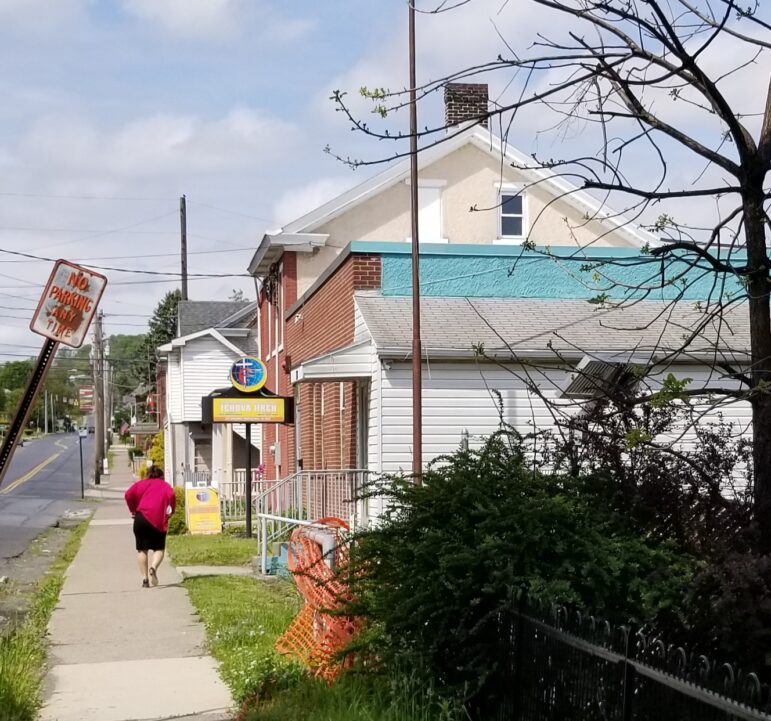 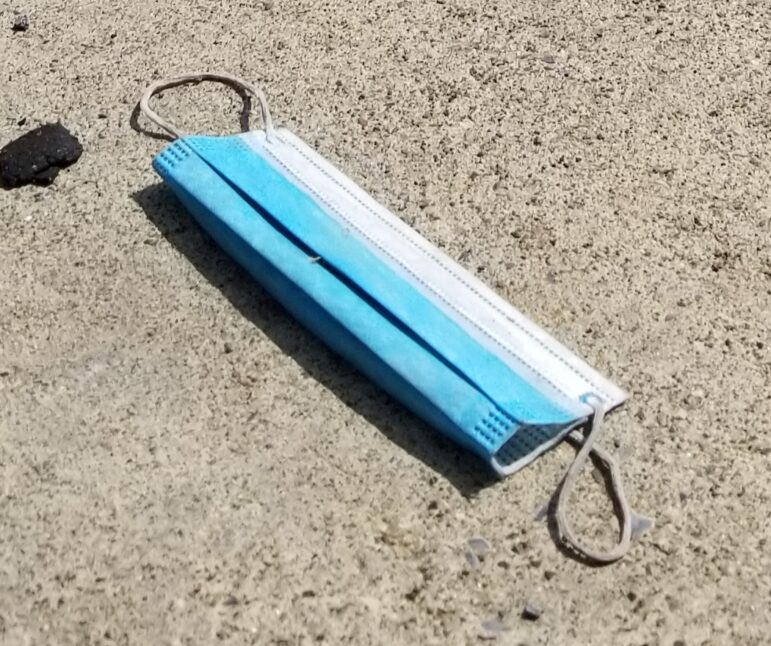 A discarded disposable face mask litters a sidewalk near the church.