Although prior rallies have apparently been unsuccessful at convincing Pennsylvania governor Tom Wolf to move more quickly in awakening the state from its COVID-19 pandemic coma, opponents of the governor’s approach to easing restrictions are planning another one for Friday.

According to a Facebook event created by the group Pennsylvanians Against Excessive Quarantine, the “Rally: ReOpen Pennsylvania for Business!” will be held from noon to 4 p.m. Friday at the state capitol in Harrisburg.

An infographic created for the group’s Facebook event includes the web address for the Pennsylvania Firearms Assocation, which bills itself as “Pennsylvania’s only no compromise gun rights group.” 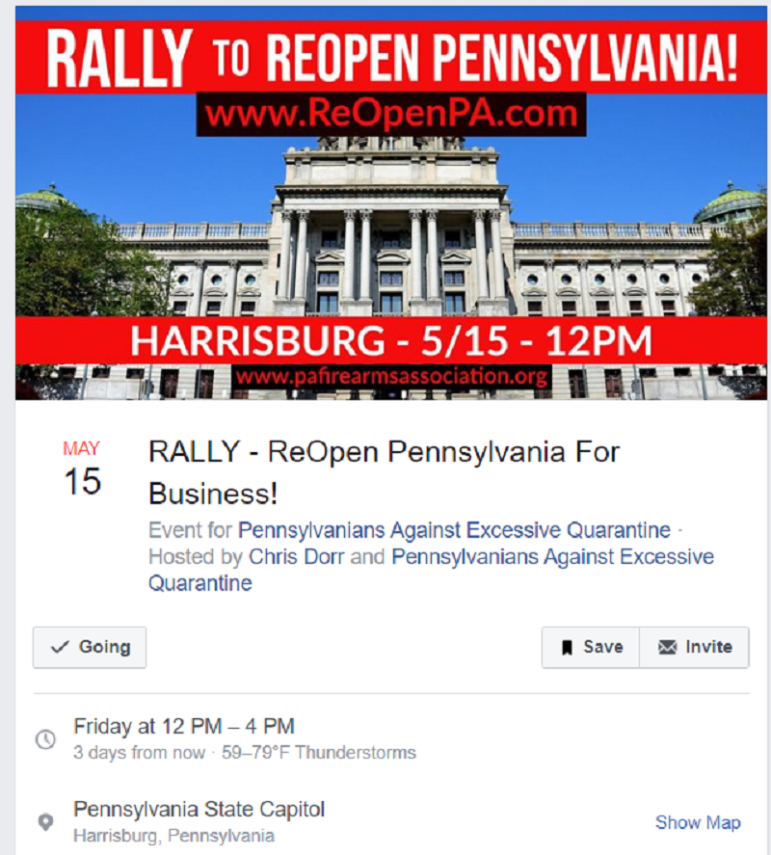 A screenshot of the Facebook event for Friday’s Rally to Reopen Pennsylvania. The event is not publicly listed, so it’s unclear how many people may have expressed interest in attending it. Per a Reuters report, Facebook has removed some anti-lockdown event listings if the company has found the events will defy government-issued public health guidelines.

“It’s time that lawmakers in Harrisburg fear gun owners again–or pay a steep political price for their betrayals,” writes PFA chairman Jason Johansen on the site’s About Us page. “We don’t care if you are a Republican, Democrat, Independent, the Governor himself, or a newly elected freshman–if you come after our gun rights, we will be aggressively coming after you.”

The anti-shutdown issue doesn’t directly involve gun rights, however it has become highly politicized, with armed protesters appearing at most rallies held throughout the country in recent weeks, including one held at the Pennsylvania State Capitol April 15.

Contingent of heavily armed individuals in back of an old military vehicle just showed up. They said they’re all independent. No affiliation. pic.twitter.com/Y8GMcN12eG

The young men seen wearing Hawaiian shirts in the viral video above match the description of so-called Boogaloo Boys; advocates for a second American civil war, according to a May 7 Daily Beast story.

NPR reported in January that the origins of the term “Boogaloo” can be traced to American pop culture, and that its current use by members of the far left, anarchists, and particularly among self-described right-wing patriot groups likely lies within the gaming subculture, in which its came to mean “any unwanted sequel.”

Along with the men in the back of the military vehicle, the April 15 rally drew as many as a thousand people to the state capital, according to media estimates.

Prior to it, Wolf said he would not attempt to have capitol police arrest protesters, who gathered in defiance of a state health department order that limits gatherings in stay-at-home areas to no more than 10 individuals. Many of those who attended did not observe social distancing guidelines or wear face coverings, as documented in photographs and video of the event. Wolf and state health secretary Dr. Rachel Levine said in remarks during press conferences that they were most worried about the health of those present.

Not all law enforcement authorities have been as lenient in allowing anti-shutdown protests to proceed, however, as can be seen in video of a protest in a New York City park over the weekend that reportedly ended with the arrest of nine anti-shutdown activists.

This happened right before all 9 of us got arrested NYPD arrests single mom 2 days in a row pic.twitter.com/PnjfREjyid

In addition to Pennsylvanians Against Excessive Quarantine, the Facebook event for the May 15 rally names as an organizer Chris Dorr, who is Political Director at the Pennsylvania Firearms Association according to his Facebook profile.

Dorr is considered a conservative gun rights activist, has been linked to the organization of anti-shutdown rallies in other states and lives in Ohio, according to the site OhioGunOwners.org.

The web address for ReOpenPA.com links directly to a membership/petition page on the Pennsylvania Firearms Association website.

Visitors to that page are encouraged to sign a petition endorsing Senate Resolution 323 and House Resolution 836, which are being promoted by supporters as a legislative means of bringing an end to Wolf’s executive order and the shutdown.

“Governor Wolf derives his power to declare a state of emergency from 35 Pa.C.S. § 7301(c), but it also authorizes the General Assembly to terminate Wolf’s orders if they have gone too far,” the site claims. “Pennsylvanians are very capable of safely reopening their businesses and factories and stores–and they don’t need government nannies to tell them how to do it.”

The complimentary resolutions have been introduced in the Senate and General Assembly by state Sen. Doug Mastriano (R-33) and state Rep. Russ Diamond (R-102), respectively, both of whom represent parts of central Pennsylvania where support for early termination of Wolf’s stay-at-home order appears to be growing.

After several counties including Lebanon–part of which Diamond represents–and York–part of which Mastriano represents–either demanded or requested an early end to their ‘red zone’ (equivalent to shutdown) status late last week, Wolf responded Monday by warning county leaders who may be contemplating about going rogue by reopening without permission that they will face “negative consequences” if they decide to do so.

Further escalating tension on both sides of the issue was a tweet Monday by President Donald Trump in which he signaled support for the early removal of restrictions on Pennsylvanians’ movement and said Wolf’s actions are motivated by partisan politics.

The great people of Pennsylvania want their freedom now, and they are fully aware of what that entails. The Democrats are moving slowly, all over the USA, for political purposes. They would wait until November 3rd if it were up to them. Don’t play politics. Be safe, move quickly!

At the same time, Trump approved increased safety measures at the White House, where staff must now wear masks in the West Wing due to an increased potential for exposure to the virus among them.

Trump has repeatedly eschewed the idea of wearing a mask himself, which makes it unlikely that he will don one when visiting a medical equipment distribution facility in Upper Macungie Township this Thursday; a visit that was announced late Monday.

Wolf has defended his administration’s phased approach to reopening, which he said Monday was the same approach it used in shutting down the state in March.

“We are indeed showing signs of success in this fight,” he said Monday. “We have begun to flatten the curve of infection in many parts of the commonwealth, which is why 24 counties have already moved into the yellow zone.”

At mid-day Tuesday, the Pennsylvania Department of Health confirmed 837 new cases of COVID-19, which brought the statewide total number of cases to nearly 58,000.

More than 3,800 Pennsylvanians have died from COVID-19, according to the health department.