The Lehigh Valley will receive a visit from President Donald Trump this Thursday.

Trump plans to visit a distribution center for medical equipment and supplies in Upper Macungie Township, according to the reports by various local publications. 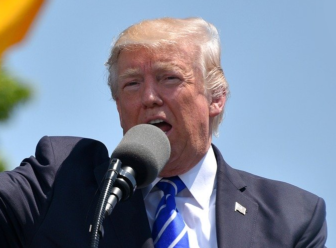 President Donald Trump speaking at an event in 2017.

WFMZ.com cited a White House official in reporting that the facility Trump plans to visit is a distribution center for Owens and Minor Inc., a company headquartered in Virginia that distributes N95 masks, surgical gowns and other types of personal protective equipment (PPE).

The report indicated that Trump will likely talk about replenishing the National Strategic Stockpile of supplies as well as COVID-19 testing.

In a news release and on Twitter Monday, the White House touted the ramping up of testing in response to the ongoing novel coronavirus pandemic.

“As a result of President Trump’s leadership, the United States has become the world’s leader in coronavirus testing,” a news release said. “More than nine million tests have now been completed in the United States–by far the most in the world–and this number will soon surpass 10 million.”

The news release noted that “President Trump revolutionized our testing system and, in partnership with governors, scaled up testing across the country to unprecedented levels.”

In contrast with the cooperative tone of the news release, Trump Monday tweeted support for a largely Republican-led effort to defy restrictions on reopening Pennsylvania; an effort that has put some county leaders at odds with Democratic governor Tom Wolf.

Trump tweeted that “the great people of Pennsylvania want their freedom now, and they are fully aware of what that entails” and said Wolf’s cautious approach to reopening is part of an effort by Democrats to move slowly on reopening, “for political purposes.”

“Be safe, move quickly!” he advised.

The great people of Pennsylvania want their freedom now, and they are fully aware of what that entails. The Democrats are moving slowly, all over the USA, for political purposes. They would wait until November 3rd if it were up to them. Don’t play politics. Be safe, move quickly!

Wolf later responded to the tweet by defending his approach to reopening the state and arguing that recommendations to reopen quickly and remain safe are at odds with each other.

Earlier Monday, Wolf warned the leaders of the counties that have said they will defy his order and reopen early that they will face “negative consequences” if they follow that path. 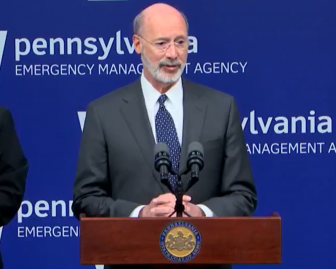 Gov. Tom Wolf is pitted against some county leaders in a disagreement over when the counties should be allowed to reopen, following a six-week shutdown due to the COVID-19 pandemic. (FILE PHOTO)

Among the counties that have declared their intention to move from the red phase to the yellow phase of Wolf’s reopening plan for Schuylkill, Lancaster and Lebanon. Leaders of several others including Dauphin, Carbon and Berks have expressed support for an earlier reopening than June 4, which is when additional counties could be moved to a less restrictive phase of Wolf’s stay-at-home order.

State Sen. Lisa Boscola (D-18), who represents parts of Northampton and Lehigh counties, has also called on Wolf to reopen the Lehigh Valley before June. In a letter to the governor Friday, Boscola said leading infectious disease experts from St. Luke’s University Health Network and Lehigh Valley Health Network support an earlier reopening. However, WFMZ reported Monday that one of the two doctors she cited disagreed with her characterization of what he said.

Wolf has said that science should help guide a cautious approach to reopening the state, and he noted that while efforts at social distancing have helped to flatten the pandemic’s curve in Pennsylvania, nearly 4,000 state residents have lost their lives to the disease.

The governor also had a warning for business owners who might try to reopen earlier than permitted according to the guidance from the state.

“By opening before the evidence suggests you should, you are taking undue risks with the safety of your customers,” Wolf said. “That is not only morally wrong. It’s also very bad business.”

One consequence of reopening too soon for restaurants that sell alcohol could be the loss of their liquor licenses, and the counties that are rebelling could lose millions of dollars in stimulus aid, the governor said.

Details about Trump’s visit have not yet been officially announced by the White House.