The Pennsylvania Department of Health Thursday reported the largest single-day total of new COVID-19 cases in nearly six weeks, as health officials in the Commonwealth and other states work to contain an increasingly worrisome surge nationwide.

As of midnight Thursday, there were 832 new cases of novel coronavirus reported across Pennsylvania’s 67 counties, according to the department.

In addition to being the largest single-day new case total since May 21–when the state also reported 832 cases of the disease–the total announced Thursday also reflected a nearly 30 percent increase in new cases in just 24 hours.

On Wednesday, 636 new cases were confirmed; the most in approximately four weeks. 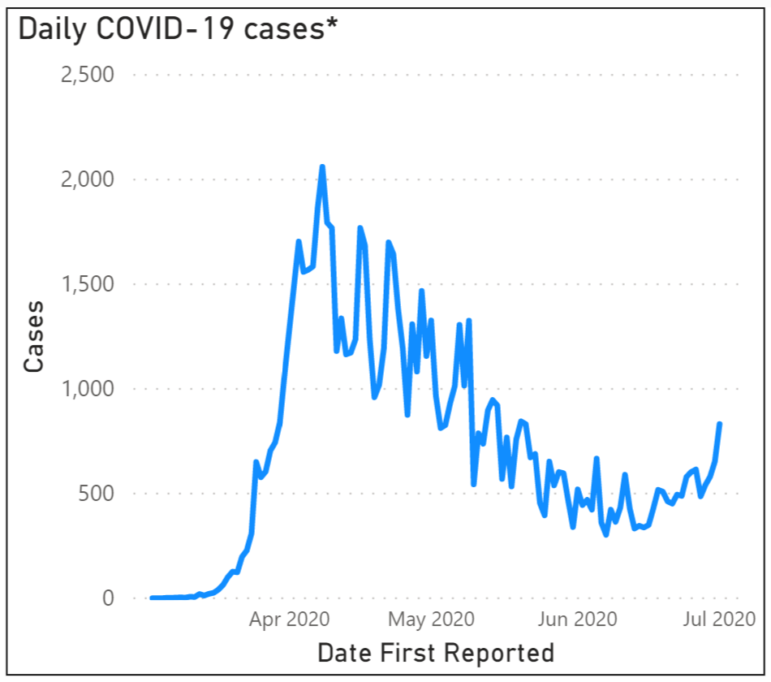 A Pennsylvania Department of Health chart shows the large increase in the number of new COVID-19 cases reported on Thursday, July 2, 2020. The increase was reported a day after Gov. Tom Wolf announced an expansion of the state’s face mask requirement to help slow the spread of the disease. The novel coronavirus has claimed the lives of more than 6,600 Pennsylvanians and infected nearly 90,000 state residents since the pandemic began in March.

News of the spike in cases comes a day after Gov. Tom Wolf announced that Pennsylvania’s face mask mandate was being expanded–effective immediately–to require the use of face coverings “whenever anyone leaves home” and cannot maintain a distance of at least six feet from individuals who are not members of their household.

“As we approach the Fourth of July holiday weekend and we see another spike in cases today in Pennsylvania, it’s critical that Pennsylvanians take the mandate to wear masks seriously,” Wolf said in news release Thursday. “This virus is not gone and mask-wearing is a required mitigation effort that we know works to stop its spread.”

“It is essential that Pennsylvanians wear masks to prevent the spread of COVID-19,” said state Secretary of Health Dr. Rachel Levine, who in mid-April signed the original order to require the use of masks in businesses, on Wednesday. “While cases increase in some areas, we cannot become complacent. My mask protects you, and your mask protects me. Wearing a mask shows that you care about others, and that you are committed to protecting the lives of those around you.”

Notable exceptions to the requirement to cover one’s face in public are for children under the age of two and individuals who cannot wear a face covering because of a medical condition.

Businesses are required to enforce the use of masks not only by their employees, but also by customers. In the case of restaurants and bars, customers are required to wear face coverings when they are not seated at a table.

A number of other health and safety requirements specifically for eating and drinking establishments were outlined in a news release by the governor on Wednesday.

In it, Wolf noted that his administration supports efforts by some local governments’ to enact more stringent protections for dining establishments’ workers and customers, such as actions taken this week by officials in Allegheny and Philadelphia counties.

He also warned that Pennsylvania State Police Bureau of Liquor Control Enforcement (BLCE) will be conducting compliance checks at licensed facilities to ensure that the requirements of the guidance are observed. Failure to comply risks citation by the BLCE, a fine of up to $1,000, and possible suspension and/or revocation of the liquor license.

Although new case counts continue to rise in Pennsylvania, it remains to be seen whether that increase will trigger significant increases in hospitalizations and deaths related to COVID-19.

Since mid-June, the weekly rate for patients being diagnosed positive with COVID-19 in Pennsylvania hospitals has crept up from 3.9 percent to 5 percent. However, testing has also increased, although Pennsylvania’s per capita testing rate for COVID-19 remains one of the lowest in the country. Meanwhile, the totals for individuals currently hospitalized with COVID-19 and individuals who have died from the disease have continued to fall.

Nationally, the number of new COVID-19 cases reported daily topped 50,000 for the first time on Wednesday, in large part due to surges in new case totals in Sunbelt states such as Texas, California and Florida, where as many as 9,000 new cases have been reported in a single day over the past week. Consequently, states like New York and New Jersey have required visitors returning from those and other states experiencing a second wave to self-quarantine for 14 days upon their return. Pennsylvania has so far not enacted such a mandate, and it is unclear if Wolf’s administration will consider doing the same.