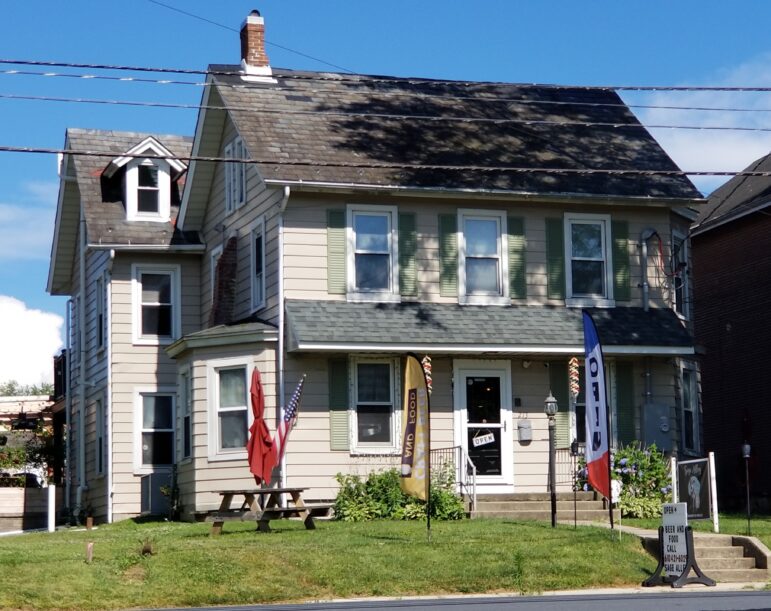 What’s become a hot topic around the country over the past few months has ignited a debate in Coopersburg, after the owners of a popular local brewpub allegedly told staff they shouldn’t be working at the establishment if they feel the need to wear face masks.

“We did not tell our employees they are not allowed to wear a mask,” she said, adding that the dispute–which has spilled onto Facebook–is now under “legal review.”

In response to a Facebook review criticizing the alleged discouragement of face mask use, a Sage Alley page administrator with apparent firsthand knowledge of the situation appeared to confirm that staff were discouraged from working if they felt a need to wear a mask.

According to Centers for Disease Control and other leading health authorities, COVID-19 may be transmitted by individuals who are asymptomatic and contagious, which is one reason many health officials have pushed for the mandatory universal use of face masks.

On the brewery’s patio Wednesday afternoon, several employees were working maskless, including a server who was waiting on a party that included two adults and a small child. 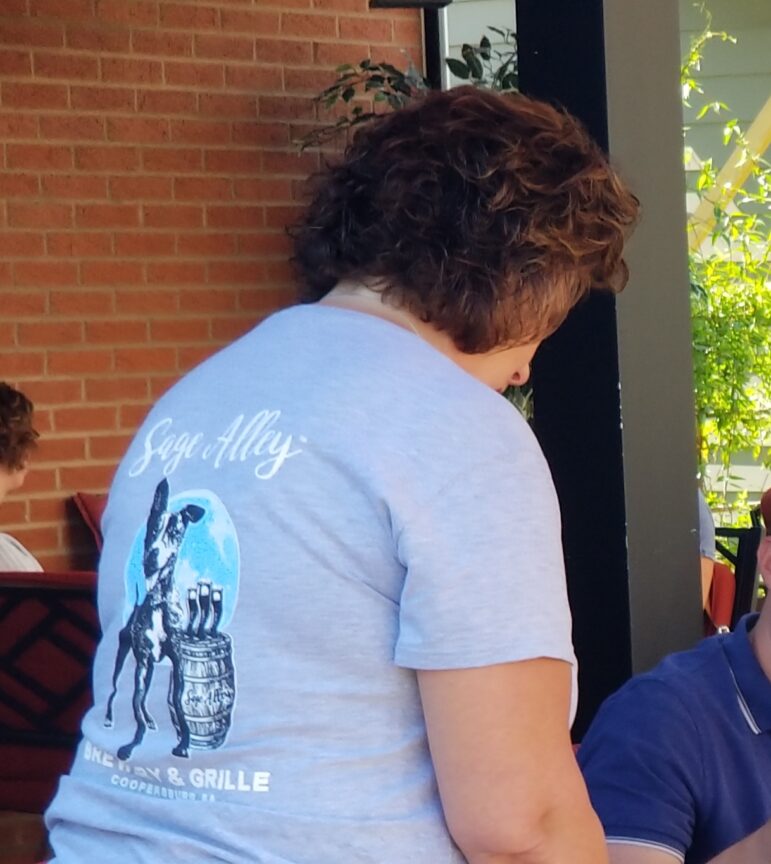 A Sage Alley Brewery employee waits on a party on the brewpub’s patio. Owner Heather Lloyd said servers don’t need to wear face masks if their patio party gives them permission not to, or if they can maintain a distance of at least six feet from others while outside.

Lloyd said staff working on the patio have the option not to don a mask if their customer or customers tell them they don’t mind if they are maskless. She also asserted that staff working outside don’t need to mask up if they can maintain at least six feet of distance between themselves and others. Inside the brewpub the rules are different, she said.

Sage Alley staff working on the patio Wednesday were seen entering and exiting the building, which houses a bar and additional seating, without wearing masks.

Pennsylvania’s COVID-19 guidance for businesses does not appear to draw a distinction between staff working inside or out in terms of the face mask requirement.

Originally published May 4 and updated Wedneday, the guidance for employers states simply that “everyone must wear a mask.” It does not detail any exemptions for workers who don’t wish to wear a mask if they receive permission from customers not to do so.

In fact, under the state health department order, even customers are required to wear face coverings at restaurants and bars, except for when they are seated at their table.

Specifically, the order stipulates that all customers are required to wear face masks when entering, exiting or traveling through a bar, restaurant or retail food service business. 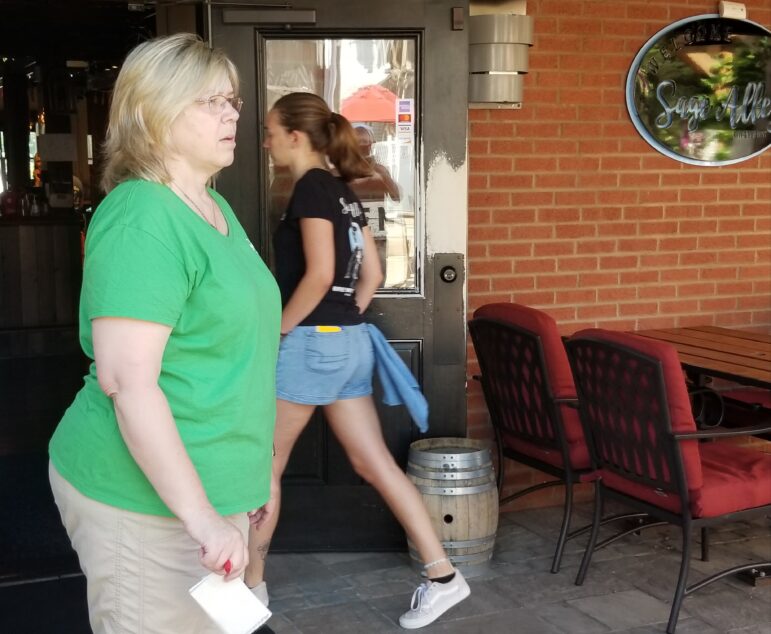 Employees at Sage Alley Brewery in Coopersburg weren’t wearing face masks while working on the restaurant’s patio Wednesday afternoon, entering and leaving the building as they did so. Owner Heather Lloyd said an April order by state Sec. of Health Dr. Rachel Levine requiring employees to wear face masks in this type of setting is not an enforceable law. She also said the brewery will comply with an expanded version of Levine’s order that was just announced by Gov. Tom Wolf.

And that order has now been made even broader.

About an hour before Lloyd was interviewed Wednesday, Gov. Tom Wolf announced that it was being immediate expanded to require Pennsylvanians to wear face masks at all times while in public, unless they are under the age of two or have a medical condition.

The original order mandating the use of masks in businesses was issued by state Secretary of Health Dr. Rachel Levine in April.

Lloyd reserved comment on Wednesday’s expansion of Levine’s order until she’d had a chance to review it, but said the original order couldn’t be enforced because it was not law.

“It is not law,” she said of Levine’s April 15 order. “Licensees’ laws is what we go by. The Department of Agriculture has no mask law and the liquor control board has no mask law.” 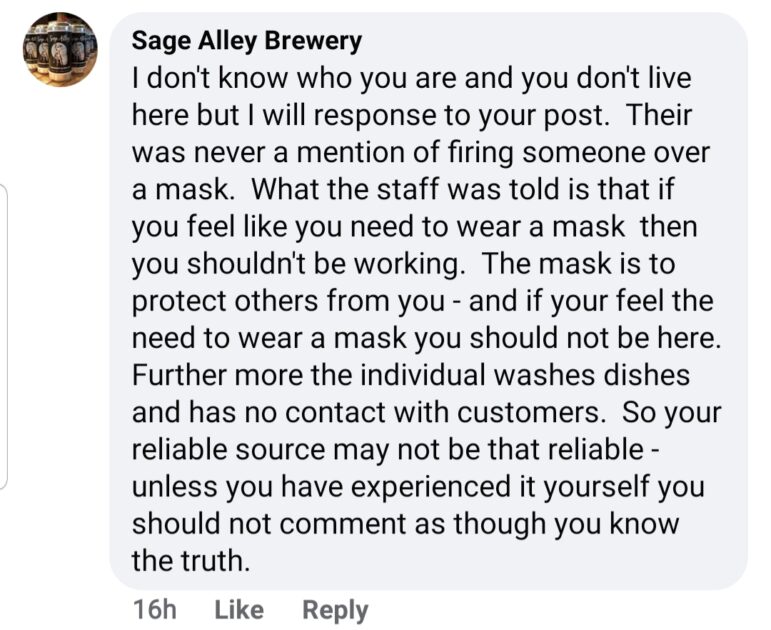 A Sage Alley Brewery response to a negative Facebook review appears to confirm that employees were discouraged from working if they felt the need to wear a face mask. The review and response were posted on the Sage Alley page on Tuesday.

Levine’s original order mandating the use of face masks by employees and customers in businesses cites the authority vested in her as health secretary by Pennsylvania’s Disease Prevention and Control Law, 35 P.S. §§ 521.1, 521.5; sections 2102 and 2106 of the Administrative Code of 1929, 71 P.S. §§ 532, 536; and the Department of Health’s (Department’s) regulations at 28 Pa. Code §§ 27.60-27.68 (relating to disease control measures; isolation; quarantine; movement of persons subject to isolation or quarantine; and release from isolation and quarantine). “Particularly, the Secretary has the authority to take any disease control measure appropriate to protect the public from the spread of infectious disease,” the order states.

Under the newly-expanded order, masks “must be worn when anyone leaves home,” Wolf said Wednesday in a news release.

“This mask-wearing order is essential to stopping the recent increase in COVID-19 cases we have seen in Pennsylvania,” he said. “Those hot spots can be traced to situations where Pennsylvanians were not wearing masks or practicing social distancing–two practices that must be adhered to if we want to maintain the freedoms we have in place under our reopening.”

After declining for weeks, new case counts have been on a slow rise statewide since late June, with surging case counts across the Pittsburgh area and some other parts of western Pennsylvania that moved to the green phase of reopening in early June.

Lehigh, Bucks and Monroe counties have also been labeled hot spots due to recent increases in the number of new cases of COVID-19 being reported to the state.

To date, enforcement of the order requiring the use of face masks has been limited, but in a separate news release titled “Pennsylvania Restaurants and Bars Required to Protect Workers and Patrons During COVID-19,” Wolf warned that it is being stepped up.

“The Pennsylvania State Police Bureau of Liquor Control Enforcement (BLCE) will be conducting compliance checks at licensed facilities to ensure that the requirements of the guidance are observed,” the release said. “Failure to comply risks citation by the BLCE, a fine of up to $1,000 and possible suspension and/or revocation of the liquor license.”

Lloyd said Sage Alley Brewery will comply with whatever the requirements of the expanded state health department order are.