HARRISBURG — As regulators struggle to decide when to end Pennsylvania’s moratorium on utility shutoffs, a Republican lawmaker is seeking support to offer financial assistance to households and small businesses behind on their bills because of the coronavirus pandemic.

In March, the Public Utility Commission directed all companies under its purview to halt electric, water, gas and other utility shutoffs, and to reconnect service to any terminated customers. The moratorium was set to last until the end of Gov. Tom Wolf’s disaster declaration, which he extended for 90 days in June.

But with all 67 counties now in the least-restrictive reopening phase, PUC Chair Gladys Brown Dutrieuille said last week that Pennsylvania “finds itself in a different place” than in the spring. An endless moratorium could place some customers “at increased risk of default and termination in the future, when large bills inevitably become due,” she said.

Dutrieuille proposed the creation of a stakeholder task force to debate how and when to end the moratorium, an idea the commission rejected last week, opting to put the issue on hold yet again.

The commissioners, however, are unanimous in their backing of a proposal from Sen. Tom Killion (R., Delaware) that would provide additional financial assistance to individuals and small businesses. Just how big the relief package will be has yet to be determined.

PennPIRG, a nonpartisan group that advocates for consumers, said nearly 800,000 households and 55,000 businesses in Pennsylvania are at risk of a shutoff. Those estimates are based on recent data that major and smaller utility companies submitted to the PUC showing how many accounts would be subject to termination.

The group is calling on lawmakers to appropriate at least $150 million in aid.

In an email, Killion said his staff is “reviewing the recent filings of utilities with the PUC and working to determine the number of affected customers and the size of the needed assistance package.” 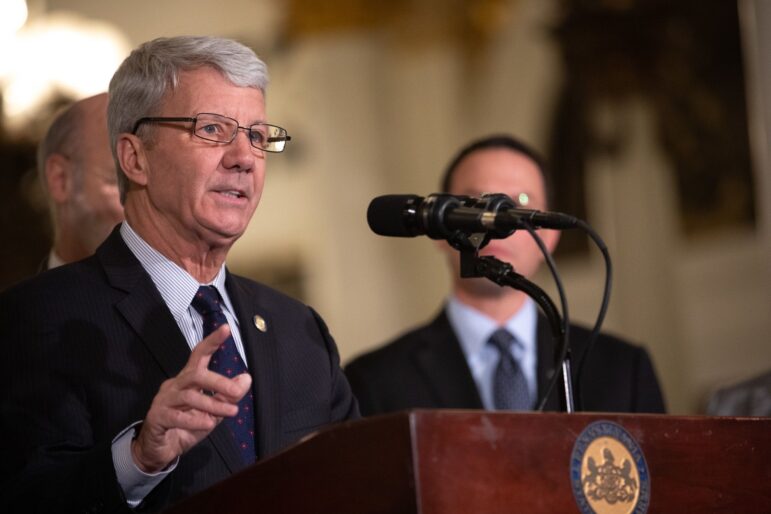 Sen. Tom Killion (R., Delaware), seen here in the Capitol in December 2019, plans to introduce a bill that would provide additional financial assistance to individuals and small businesses.

Pennsylvania still has $1.3 billion in flexible federal stimulus dollars it can spend on assistance programs like Killion’s. In May, Wolf and lawmakers agreed on a $2.6 billion package that sent millions to struggling nursing homes, created a grant program for small businesses, and provided rental assistance to households at risk of eviction.

While some in Harrisburg are waiting to see if Congress will allow states to use any remaining funds to make up for lost revenue–which could total $5 billion in Pennsylvania–lawmakers can’t sit on these dollars forever. The money must be spent by Dec. 30.

Seniors, families with children and those who have been recently laid off because of the pandemic are vulnerable to utility shutoffs, especially as more people stay home in the summer to escape the heat, said Elizabeth Marx, an attorney with the Pennsylvania Utility Law Project.

“Sheltering in place has raised utility costs for a lot of households,” Marx said. “When you’re home all day long, you use a lot more water. Your kids don’t go to school, so you use a lot more electricity. All of those things are causing costs to go up on residential consumers.”

Pennsylvania has already offered some financial assistance to these households.

With $34.9 million from the federal CARES Act, the state Department of Human Services in May began offering crisis payments of up to $800 through an existing program that provides funds to low-income households that need help paying energy bills.

The state had approved more than 36,000 applications as of Thursday, a department spokesperson said. The program will end on Aug. 31 or earlier if the funds run out.

But existing programs have clear income requirements, meaning families that have not struggled financially before may have little recourse other than negotiating a payment plan or hoping a utility company expands its hardship program.

In a June 30 letter to lawmakers, the PUC’s four commissioners cited those restrictions as an obstacle in need of a fix.

“While many utility customers have been able to keep up with their bills during the moratorium, many others have not, some for the first time,” the commissioners wrote. “We understand that the crisis has affected not only low-income customers, but also customers with incomes higher than the federal poverty guidelines.”

In a memo seeking support from his colleagues, Killion said his plan would provide additional funding to existing programs for low-income customers and expand eligibility to people who have lost income due to the pandemic.

John Kelemen, a spokesperson for Killion, said the senator expects to introduce the bill “in the very near future.”

“Leadership knows it is a top priority for Sen. Killion,” Kelemen said.

Dutrieuille, chair of the PUC, recommended last week that utility companies adopt other protections including waiving late fees and establishing flexible payment plans for all customers. Some utilities have similar plans in place.

In May, PPL Electric Utilities, which serves 1.4 million households in Pennsylvania, told the PUC it would increase the number of times it attempts to reach a customer before terminating service and offer for large balances monthly payment plans that are not solely based on income.

Still, Emma Horst-Martz, a campaign associate for PennPIRG, said there are fears those programs won’t be enough to keep the lights on for many Pennsylvania households.

“All of these utility conversations sound really nitty-gritty, like it’s meant for policy wonks,” Horst-Martz said. “But when you break it down, the reality [is] that not being able to pay a $60 utility bill for one month could land you in a spot where you lose electricity that keeps your fridge running, keeps your food cold, you can’t have a fan or air-conditioning during the hot summer months, you don’t have internet to find a new job. This will have serious impacts on everyday people.”