The view of the Lehigh River from the Freemansburg Bridge is lovely at this time of year, but it’s best enjoyed while walking across it.

One driver, however, got an up-close view of the water and railroad tracks below it without even exiting their vehicle.

Pictures taken by an eyewitness Wednesday morning show a grey sedan wedged between the concrete “Jersey barrier” that separates the roadway from the sidewalk and the outer wall at the east end of the bridge, at the borough’s border with Lower Saucon Township near Steel City. 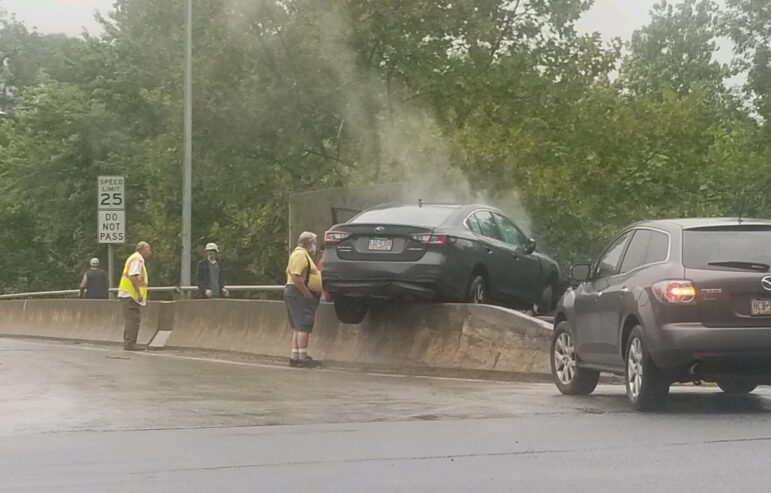 Onlookers were horrified at the sight of a car that appeared as if it were about to plunge off the edge of the Freemansburg Bridge Wednesday morning. Somehow the car jumped a concrete Jersey barrier and became wedged between the barrier and the bridge’s outer wall. Part of the vehicle was left dangling off the edge of the span, high above railroad tracks.

The vehicle crashed through a chainlink fence that is above the outer wall, which left part of the car’s front end dangling somewhat precariously over the open space below.

The witness remarked that it was fortunate there were no pedestrians on the sidewalk when the accident occurred.

The driver of the vehicle was able to exit it and did not appear to be hurt, it was said.

First responders assisted at the scene.

It was unclear what kind of damage the vehicle sustained or what caused the single-vehicle accident, although roads were apparently wet at the time it occurred. 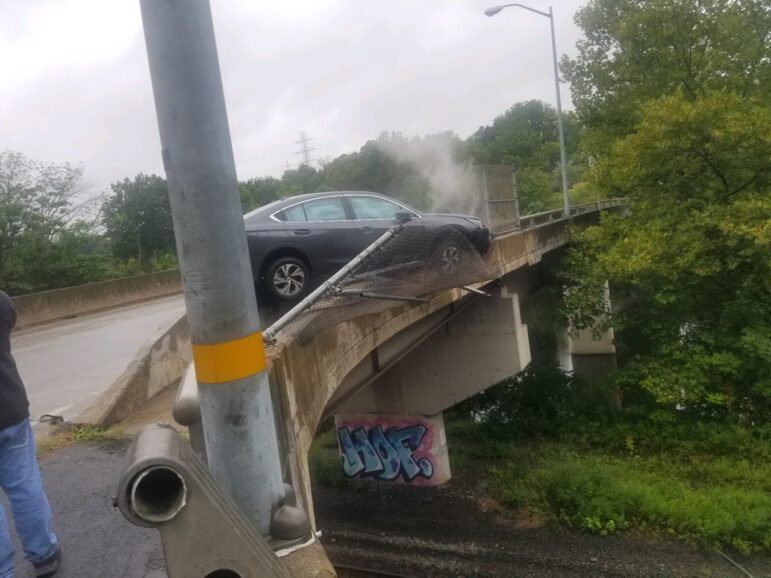 A side view of the accident scene shows the vehicle perched on the edge of the bridge, with part of its front end suspended above open space. It was unclear how the crash occurred. Below the bridge at its eastern end are two sets of railroad tracks.