Student athletes aren’t immune to the effects COVID-19 has had on our society. New procedures, new rules and games being postponed are changes the Saucon Valley boys soccer team has experienced so far. Led by first-year head coach Chris Nagy, the team understands this will not be a normal soccer season, but they have the dedication and commitment to rise to the occasion.

While Saucon delayed the start of practices and games, other schools followed their normal schedules. Sept. 21 was the date of Saucon’s first game, but their opponent, Northwestern Lehigh, already had four scrimmages under their belt by then. As a result, the Tigers had much more playing experience when they faced off against the Panthers, as well as the home field advantage. Having lost 10 seniors last year, the Panthers have a lot of younger players with little to no varsity experience, but they are all stepping up to keep the team competitive.

After several shots on goals by both teams missed, the first goal of the game was scored by sophomore Oscar Valencia, who buried the ball in the net with 18 minutes left in the half. Junior Greg Ackerman had the assist. 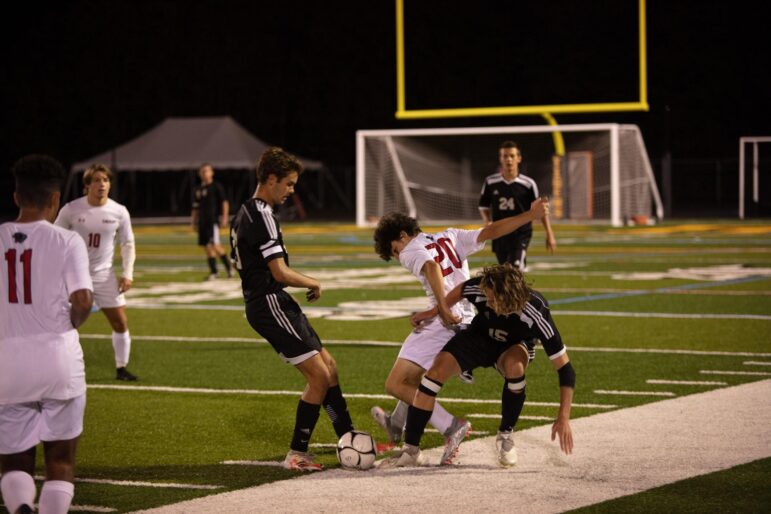 With less than six minutes left in the first half, Northwestern managed to get around the Panther defense to score and bring the game to a tie at 1-1.

Sophomore Oscar Valencia and senior Ashton Gonsalves work together to keep the ball from the Tigers.

Both teams tried to score in the second half, but just couldn’t manage to get the ball in the net. An unfortunate own goal by Saucon gave the Tigers a score of two and the game ended in a loss for the Panthers 2-1. 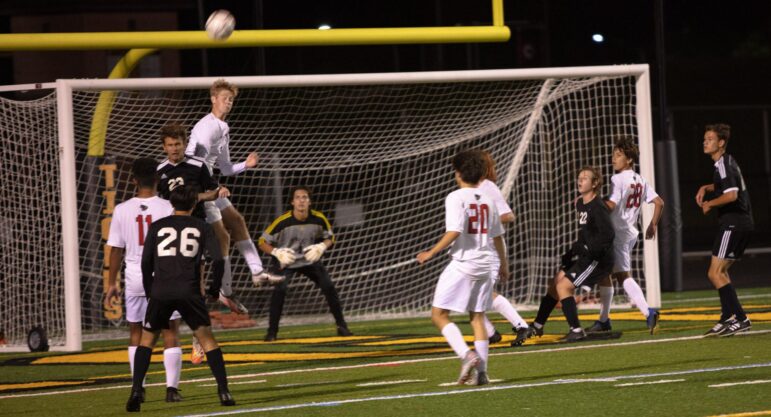 Junior Trevor Mikuta heads the ball away from Saucon’s goal.

The second game for the boys was on Wednesday, Sept. 23 at Salisbury. This was Salisbury’s senior night, so they honored their seven seniors and graciously acknowledged Saucon’s seniors as well.

This game was also played on turf, but the Panthers now had some experience playing on the faster surface. Junior defensive midfielder Jacob Christopher missed the Northwestern game, but had returned, so the team had a full roster against the Falcons.

The Panthers did well with passing and moving the ball down the field, with some nice balls out of the the back. Senior Colin Zyck had a nice run and smoked the Falcon defenders, making the first goal with 22 minutes left on the clock for the first half. The Panthers’ second goal was scored by sophomore Oscar Valencia with only 30 seconds left before the halftime buzzer. 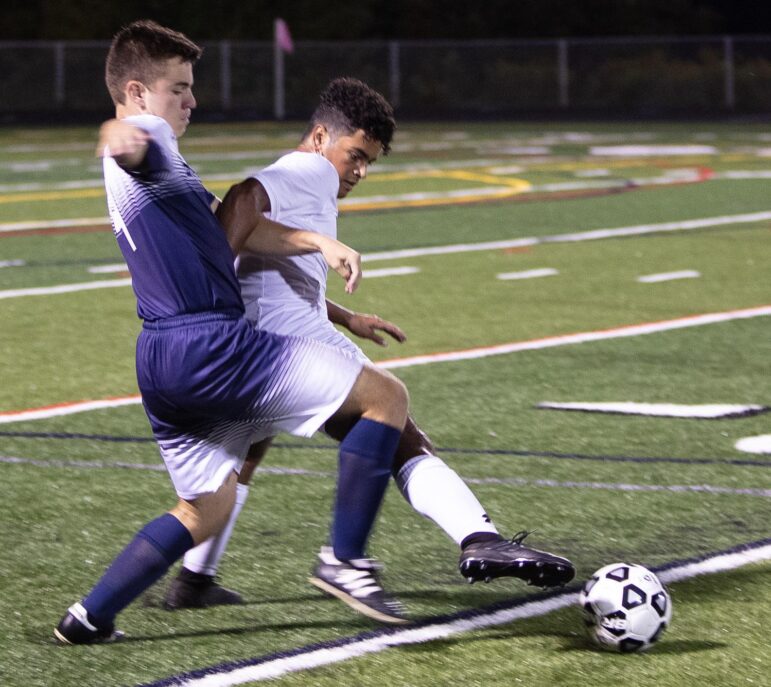 A Salisbury player can’t get past senior Ashton Gonsalves.

Although Saucon had a two-goal lead going into the second half, they knew they couldn’t let their guard down. Salisbury went on the offensive, trying to get on the board.

Their determination paid off. With 20 minutes left in the game, a Salisbury player took a shot from the 20-yard line and managed to get it in Saucon’s goal. With only a one-goal lead, Saucon knew they needed to put on the pressure. With 14 minutes left, Valencia passed to sophomore Liam Buck, who got it in Salisbury’s net. Now Saucon had a two-goal lead over Salisbury. The play started to get frantic as Salisbury was desperately trying to score again and Saucon was doing everything to keep them from scoring. The game ended in Saucon’s first win of the season, 3-1 over Salisbury. 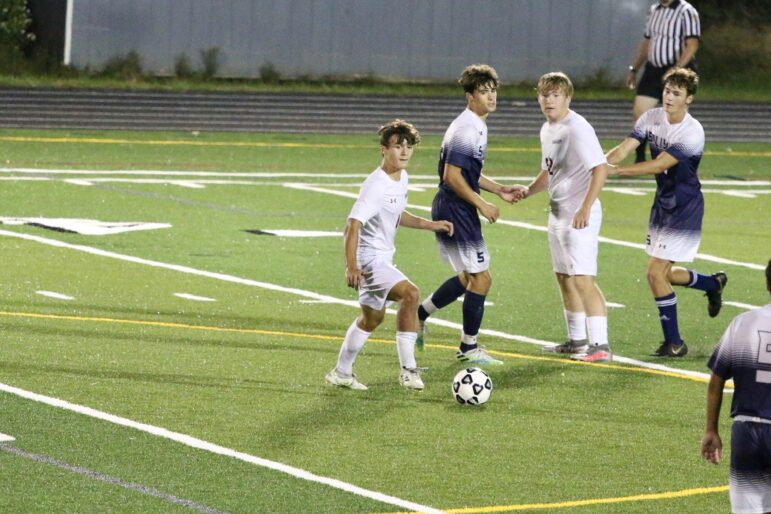 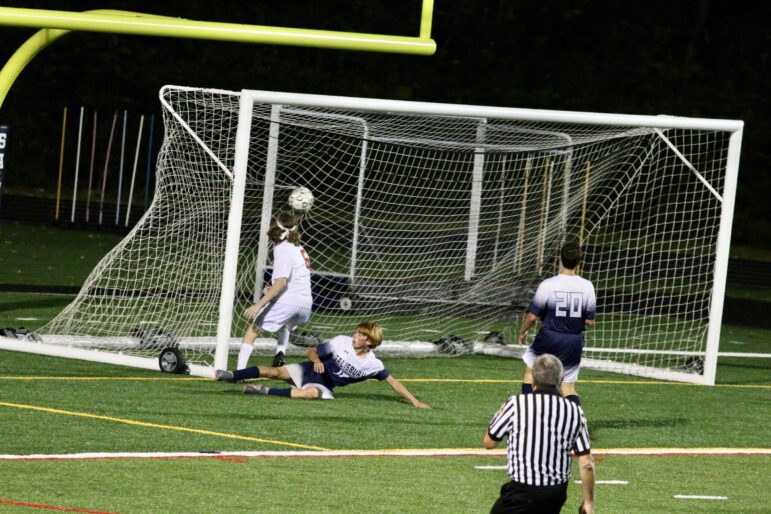 Sophomore Liam Buck buries the ball in the net for Saucon’s third goal of the game against Salisbury.

When asked about the Panthers’ performance, senior captain Colin Zyck said, “I think we really played well together as a team. Without having much practice facing other teams, we really made a tremendous improvement from our first game. We controlled the game for the entire 80 minutes of play and it showed on the scoreboard at the end.” 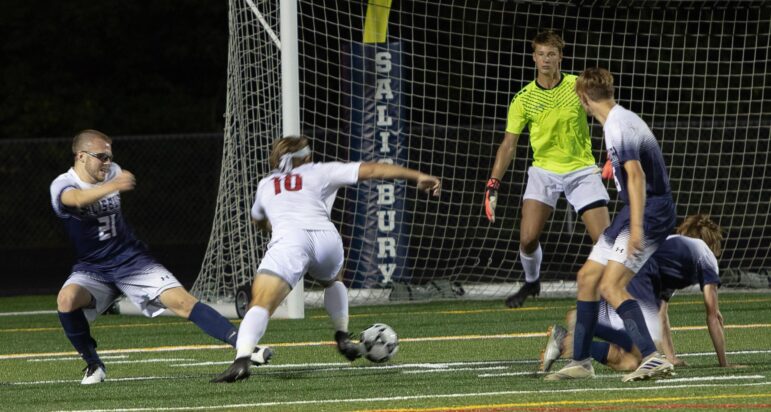 Senior Colin Zyck destroyed the Falcon defense on his way to scoring.

With both a win and a loss under their belt, it was time for the Panthers to play their first home game. Saucon hosted Pen Argyl on Friday, Sept. 25 in their third game of the week.

Although they were playing on their home grass field, it took the Panthers a while to find their groove. The first half ended in a frustrating 0-0 tie.

The start of the second half was a repeat of the first half. Both teams put shots on goal, but nothing made it into the net. Finally, with 13 minutes left in the game, junior Trevor Mikuta put the first point on the scoreboard with a header. Less than two minutes later, the only other goal in the game was scored by sophomore Liam Buck, with an assist by senior Ashton Gonsalves.

Play started getting chippy after Saucon’s second goal, and Pen Argyl received a yellow card for unnecessary roughness and then another one shortly after for unsportsmanlike conduct. Pen Argyl almost got on the board with seven minutes on the clock, but was stopped by the determined Saucon defense. Saucon won, 2-0. 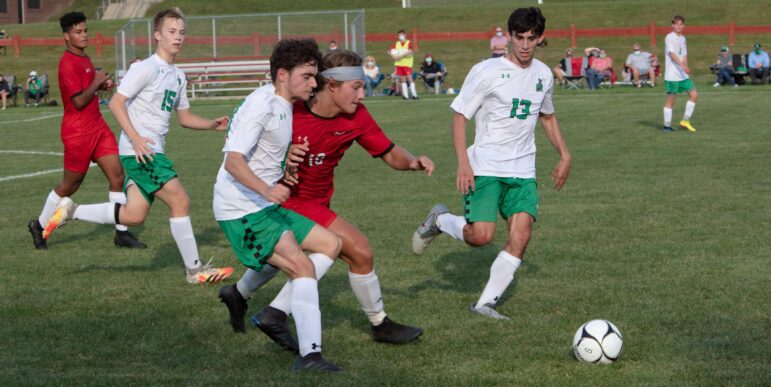 The Saucon Valley boys soccer team’s senior day was originally supposed to take place on Monday, Sept. 28, but with the temporary closure of the high school following two confirmed COVID cases, this game, as well as the home game against Moravian Academy, have been postponed.

The Panthers will play their rescheduled game against Northern Lehigh at home on Friday, Oct. 2 and travel to Catasauqua on Saturday, Oct. 3.

Good luck, Panthers! The Source is with you!