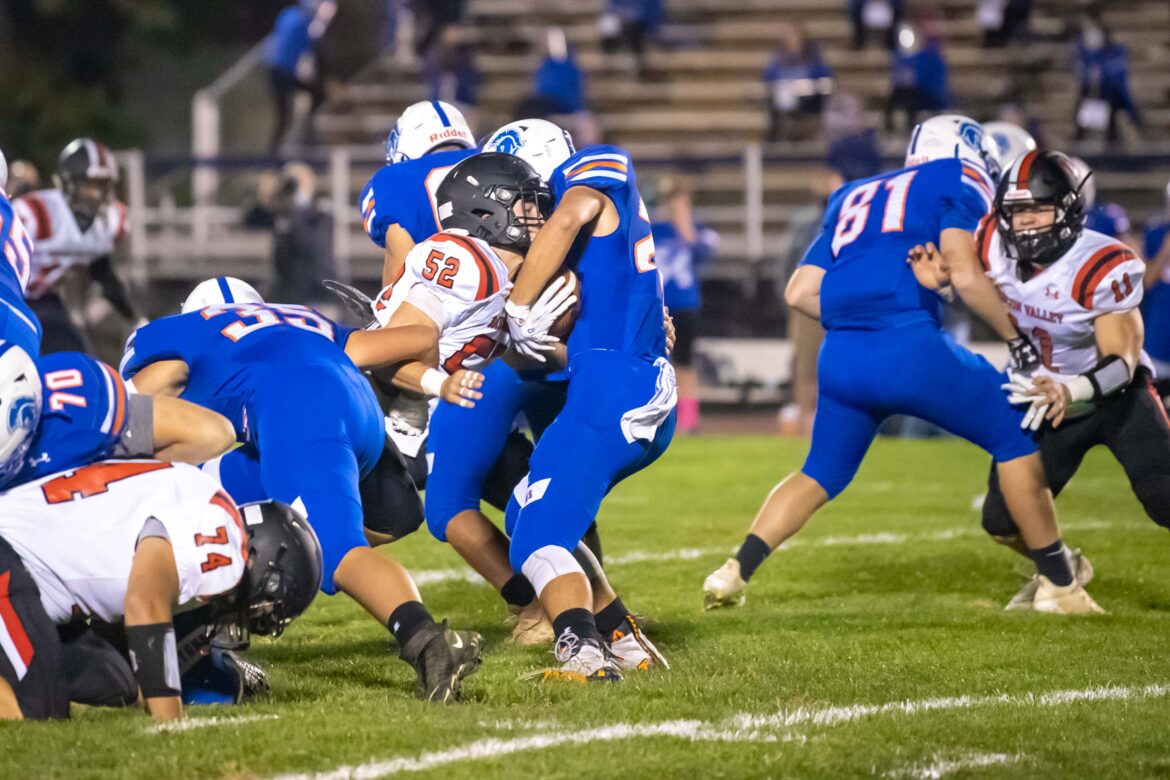 This edition of the Saucon Creek Rivalry proved to be as close as they come.

If there were any doubts that the Saucon Creek football rivalry was dead, those doubts were erased on Friday night in a classic thriller. The Saucon Valley Panthers and Southern Lehigh Spartans went toe to toe in an exciting matchup of two neighboring communities. With a 34-33 final score, this cliffhanging showdown certainly did not disappoint. 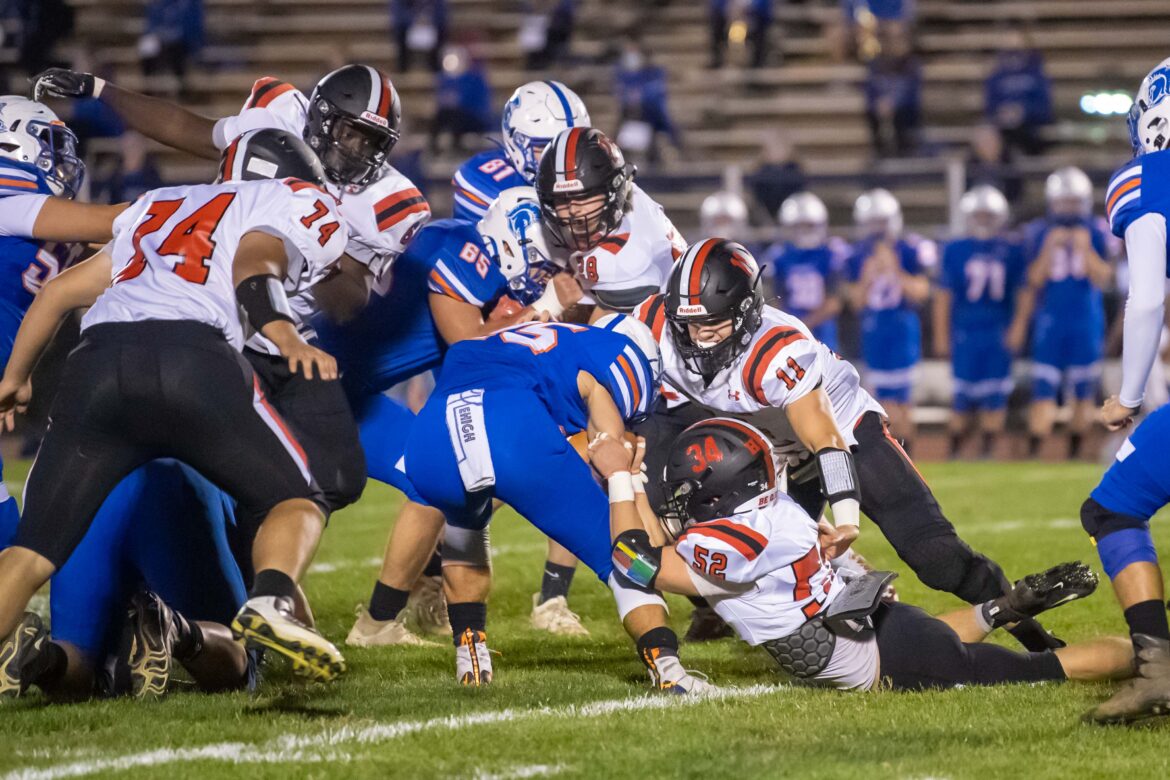 Both teams battled for 48 minutes.

Following the opening kickoff, the Panther defense forced the Spartans into a 3-and-out punt.  However, the Panthers coughed the ball up in Southern Lehigh territory allowing the Spartan’s Logan Shorb to alertly scooped it up.  Shorb returned the fumble twenty-three yards to the Panther 33-yardline.  After seven plays Spartan running-back, Jake Fauzio, pounded the ball in for a touchdown behind the left side of his offensive line. Southern Lehigh misfired on the PAT but struck first to take a 6-0 lead. 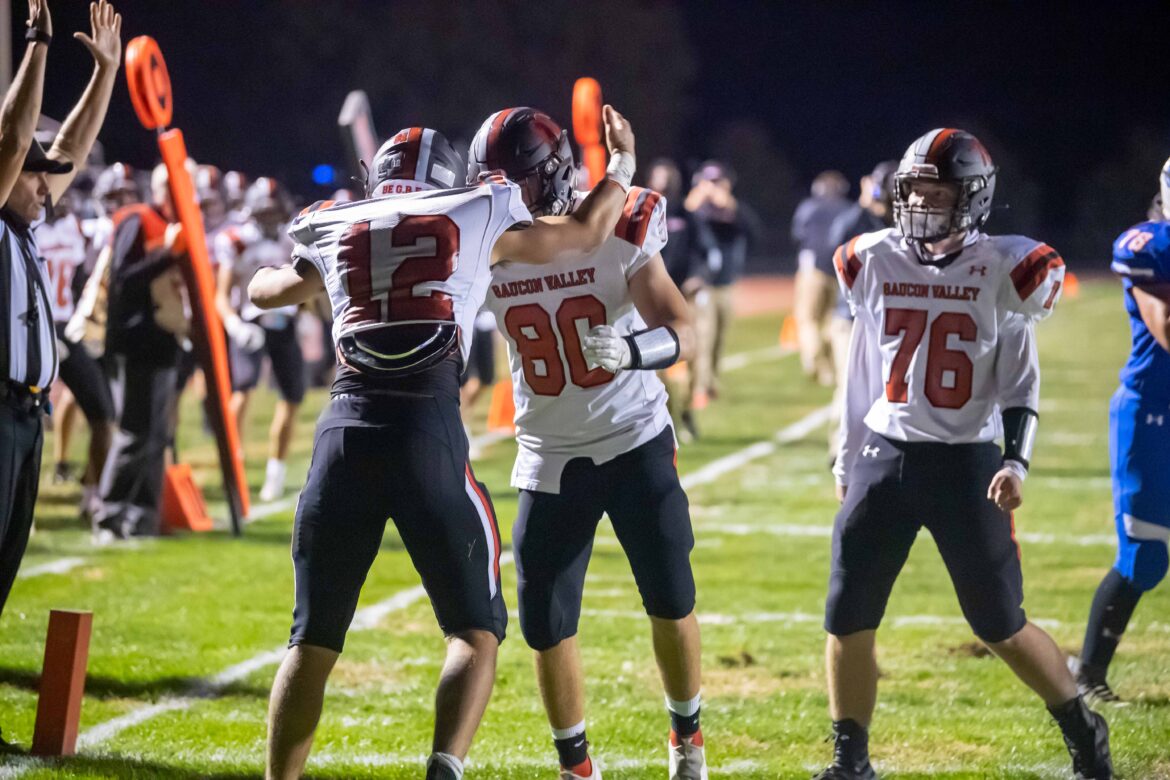 Mahaffey celebrates with his teammates after his touchdown run.

Saucon Valley’s answer was quick. Following an eight play drive Dante Mahaffey from his quarterback position, hit paydirt with a 14-yard QB keeper around the right end. Mahaffey’s score was set up by a 28-yard sideline completion to sophomore Alex Magnotta on a fade route. The full extension of Magnotta’s 6’3″ frame enable him to tiptoe the sideline for the completion before falling out of bounds. Jake Christopher’s point-after gave the Panthers a 7-6 to close out the first quarter of play. 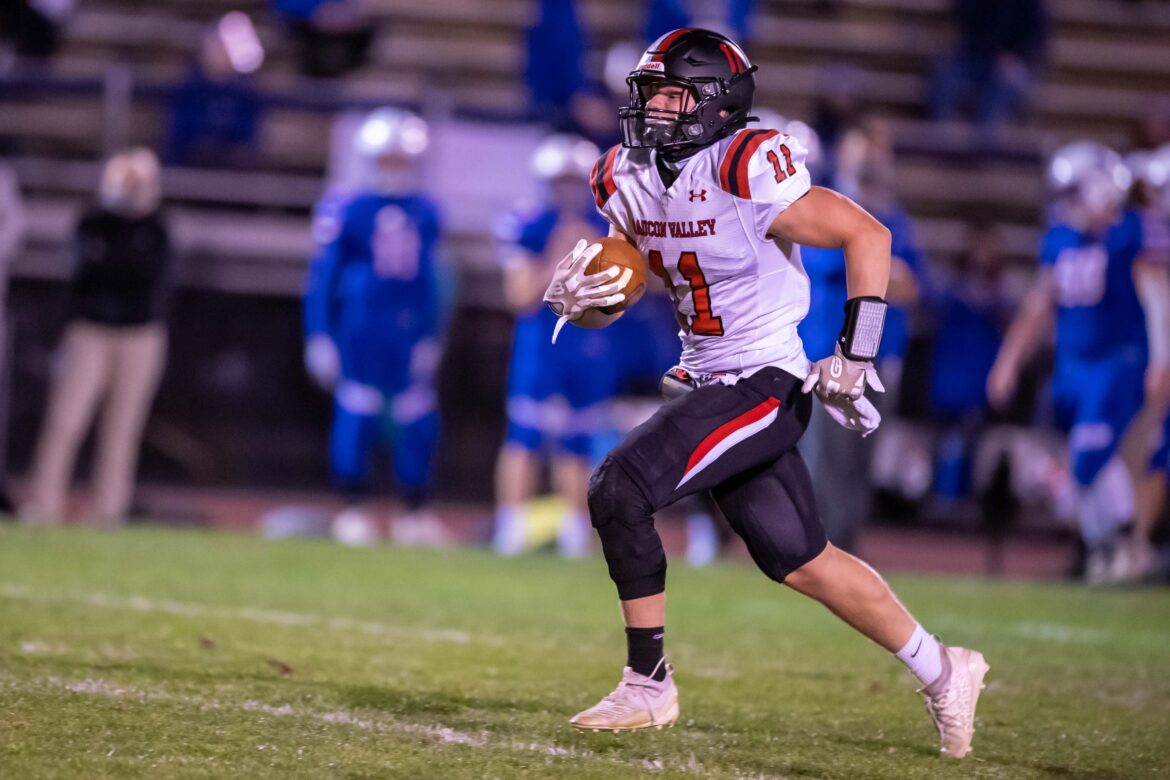 Ty Csencsits splits the safeties for a score.

The Panthers unleashed an explosive offense as they were first to light the scoreboard in the second quarter. In five quick-strike plays Saucon Valley covered 73-yards. On 3rd & 10 from their own 47-yardline, Mahaffey rifled a pass to Ty Csencsits who beat man-coverage to go the distance for a 53-yard touchdown. Christopher hit his second extra-point and Saucon took a 14-6 lead.

After returning the kickoff to their 45-yardline, the Spartans bounced right back.  Southern Lehigh methodically pounded the ball fourteen consecutive times. The drive ended with Syncere Jackson’s 5-yard touchdown run off right tackle to make the score 14-12. The Spartans opted for a 2-point conversions, but Reed Ernst and Travis Riefenstahl combined their Panther powers to stuff Southern Lehigh’s option attempt around the left end. The two teams traded punts to end the first half with Saucon Valley holding their 14-12 advantage. 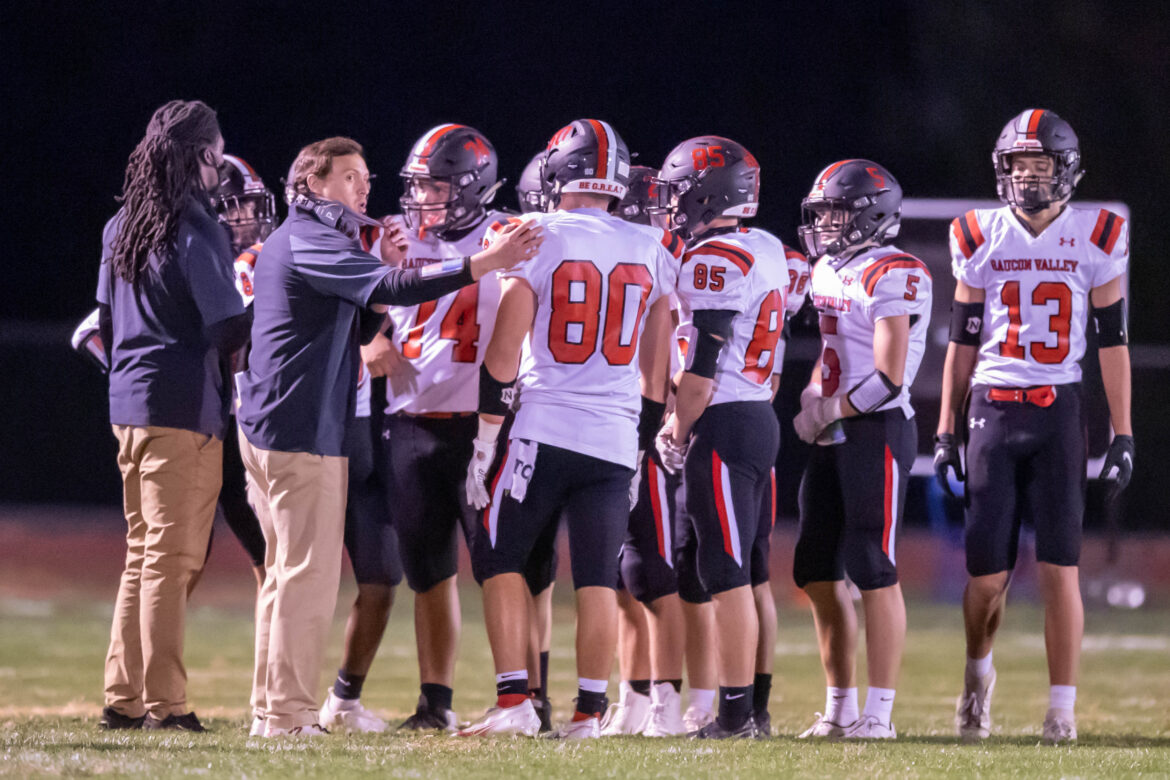 The Panthers received the 2nd-half kickoff and went into quick strike mode once again.  On 3rd & 6 from their own 26-yardline, Mahaffey found junior E.T. Aris with a step racing down the Southern Lehigh sideline.  Mahaffey was on the money and Aris held on for a 48-yard gain.  On the very next play sophomore Josh Torres popped the center of the Spartan defense and darted his way to the endzone.  Jake Christopher completed his routine to give the Panthers a 21-12 advantage. 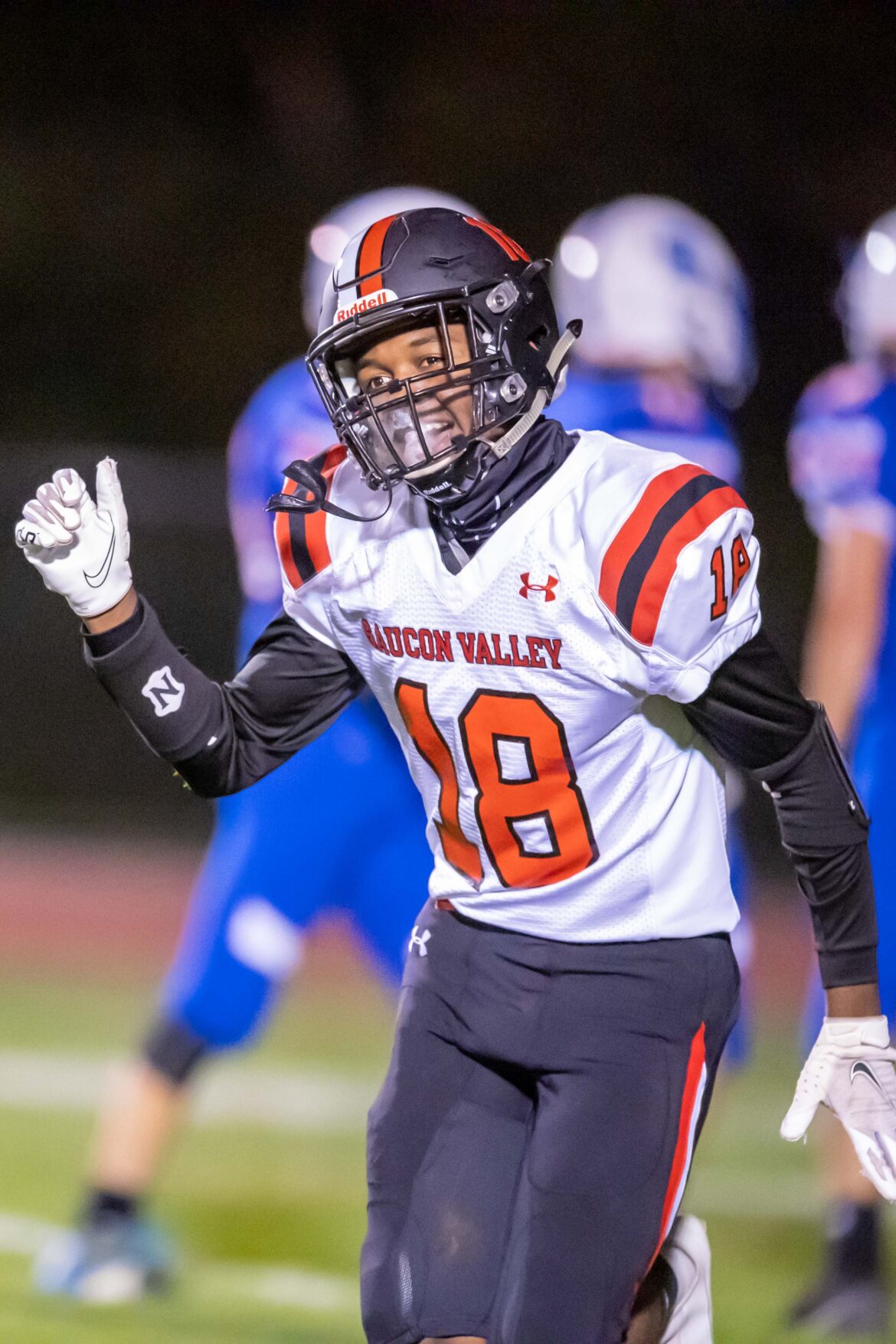 The Spartans fought right back with another methodical drive that covered 71-yards.  Southern Lehigh ran the ball twelve consecutive times.  Logan Shorb took a toss around the right end from a Power-I formation and hammered his way across the goal-line.  Freshman Cade Sawyer converted the kick-after as the Spartans climbed to a 21-19 deficit.

The Panther offense sputtered and was forced to punt.  Southern Lehigh took possession at midfield and again put on their running shoes.  Using twelve running plays and only one pass the Spartans offense chunked the Panthers.  However, the one pass of the drive allowed the Spartans to overcome a 3rd & 9 and get a first down.  Junior fullback Blaze Curry slipped out of the Spartan backfield  and caught JC Rizzuto’s short pass down to the Panther 2-yardline.  Three plays later Rizzuto sneaked the ball into the endzone for the score to take give the Spartans the lead at 25-21.  The Spartans went for two and were successful when a scrambling Rizzuto was able to find sophomore receiver Avery Koser in the back of the endzone for the conversion.  Early in the fourth quarter Southern Lehigh led Saucon Valley 27-21. 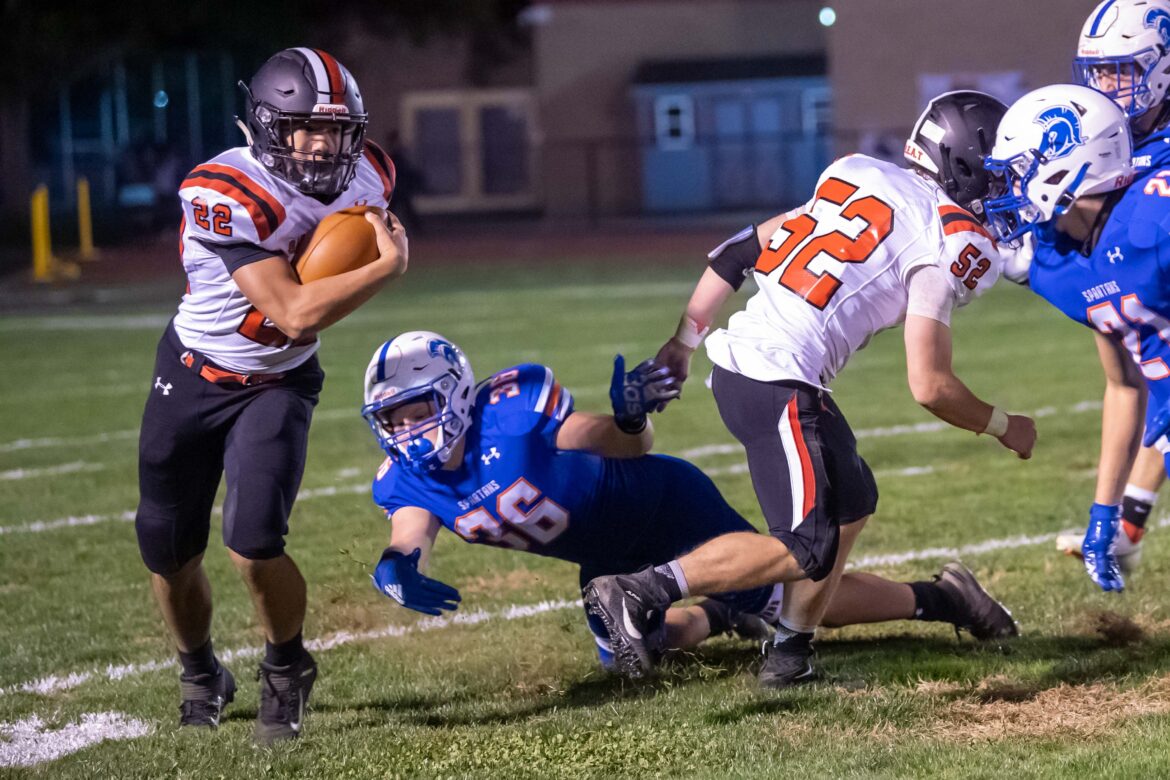 Sophomore Josh Torres had a good night and averaged almost 8-yards per carry against the Spartans.

Seemingly unfazed, the Panthers took the deficit in stride and went back to work. Saucon Valley capitalized on an 11-play drive that covered 67-yards. The Panther score included three key plays. First, with the Panthers facing a 2nd & 10 from their own 33-yardline, Mahaffey hit Csencsits on a seam route for a 30-yard completion. Then, following a fumbled snap and a couple of incomplete passes Mahaffey & Co. faced a 4th & 14 at the Spartan 40-yardline. Mahaffey dropped back, calmly stepped up under the Spartan three-man pressure, rolled out to his right and found Ty Csencsits who converted his route to a deep-cross for a 20-yard completion down to the Spartan 20-yardline. Saucon sophomore running back Josh Torres was then able to convert a 3rd & 9 down to the Southern Lehigh 6-yardline. On the very next play Torres finished the drive with a run up the gut for a score. Jake Christopher did his thing and the Panthers were back on top at 28-27 with just under seven minutes left to play. 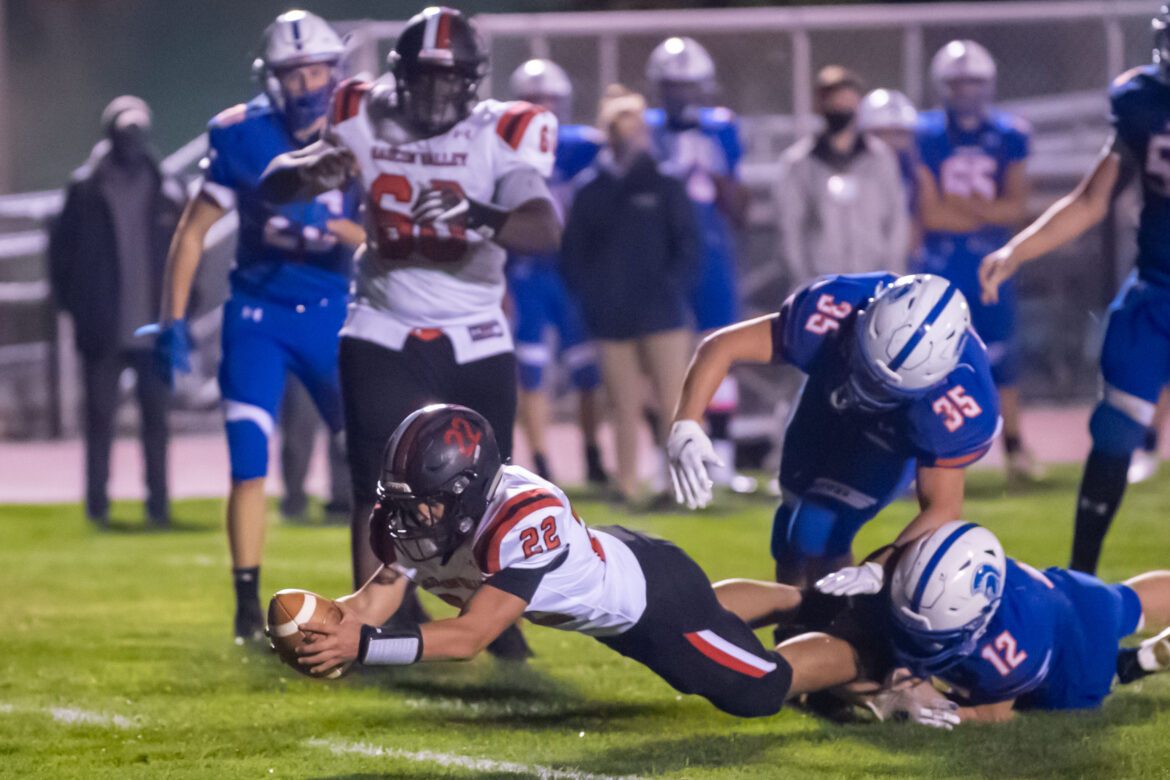 Torres for a touchdown!

The Panther celebration was short-lived however. Southern Lehigh senior Logan Shorb fielded Chris Medei’s kickoff on one hop and bolted down the Spartan sideline to go the distance for a 90-yard kickoff return for a touchdown. Southern Lehigh tried to toss their way around right end to increase their lead to eight points, but they were turned back by Chris Mann, Alex Magnotta and freshman Constantine Donahue for little gain. With a little over six minutes remaining, the Panthers trailed the Spartans 33-28.

The Panther quest to rebound was made a little more difficult with an illegal block on the kickoff and an offside penalty prior to the snap on first down. Saucon Valley needed a touchdown and would have to cover 88-yards to get it. But, it was a poised pack of Panthers who were up to the task. Facing a 1st & 15 Josh Torres powered through two Spartan tacklers as he ripped off a sweep around the right end for a 25-yard gain. After three more plays Saucon needed to overcome a 4th & 2 from their own 45-yardline. It proved to be a minor dilemma as the Panthers motioned Torres out of the backfield and pounded Mahaffey up the middle on a QB keeper behind senior David Osman. Then, facing a 3rd & 5 from the Southern Lehigh 46-yardine, Mahaffey hung tough in the face of Spartan pressure to find Ty Csencsits racing for space on another deep cross. Csencsits made a spectacular, diving catch at the 27-yardline for another first-down. 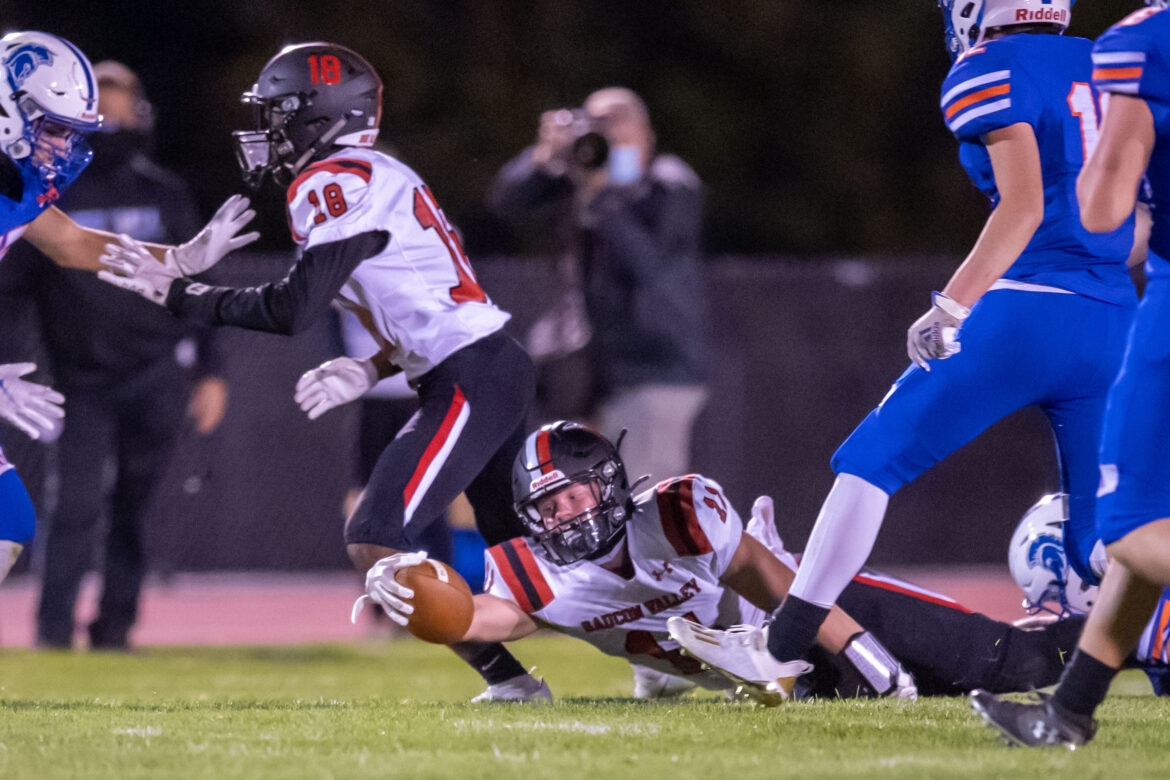 Junior Ty Csencsits reaches out for a big first down.

Mahaffey and Csencsits weren’t finished. After three plays, the Spartan defense held tough putting the Panthers in a 4th & 10 crisis. However, Saucon coolly executed when Mahaffey fired a strike to Csencsits on a hitch-route to pick up 12-yards and another clutch first-down. Two plays later, on 2nd & 10 from the Spartan 15-yardline, Mahaffey threw to Magnotta on a sideline fade for a touchdown. Magnotta’s TD reception gave the Panthers an advantage with just under two minutes left to play. Saucon tried to pound Torres up the middle to secure a 3-point lead, but the attempt failed. However, time would run out on Southern Lehigh giving the Panthers a thrilling 34-33 victory. It was another fantastic game that will continue to fuel the Saucon Creek Rivalry! 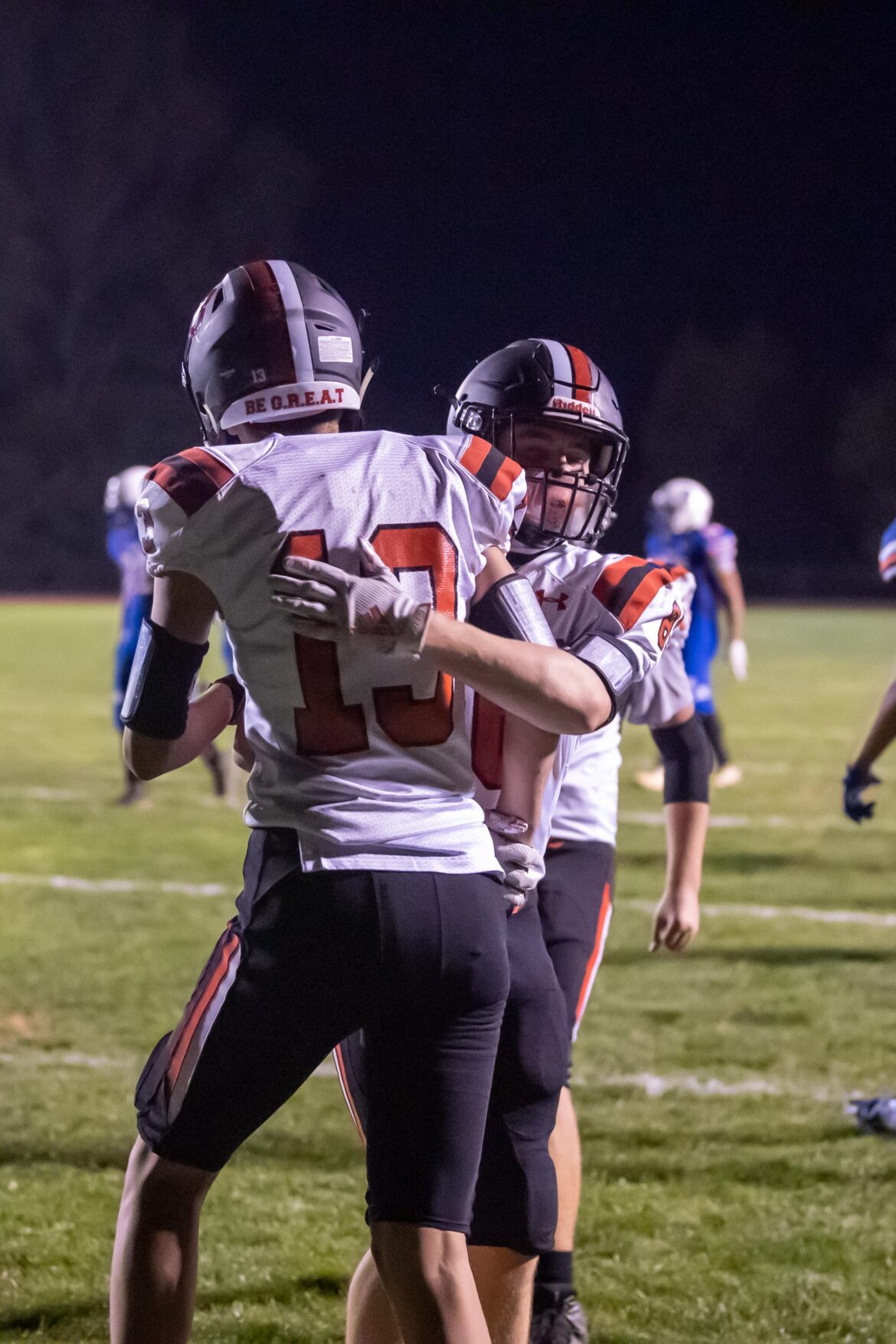 Sophomore Alex Magnotta (#13) come up big for the Panthers.

(Click here to watch the Saucon Source livestream of the entire game!) 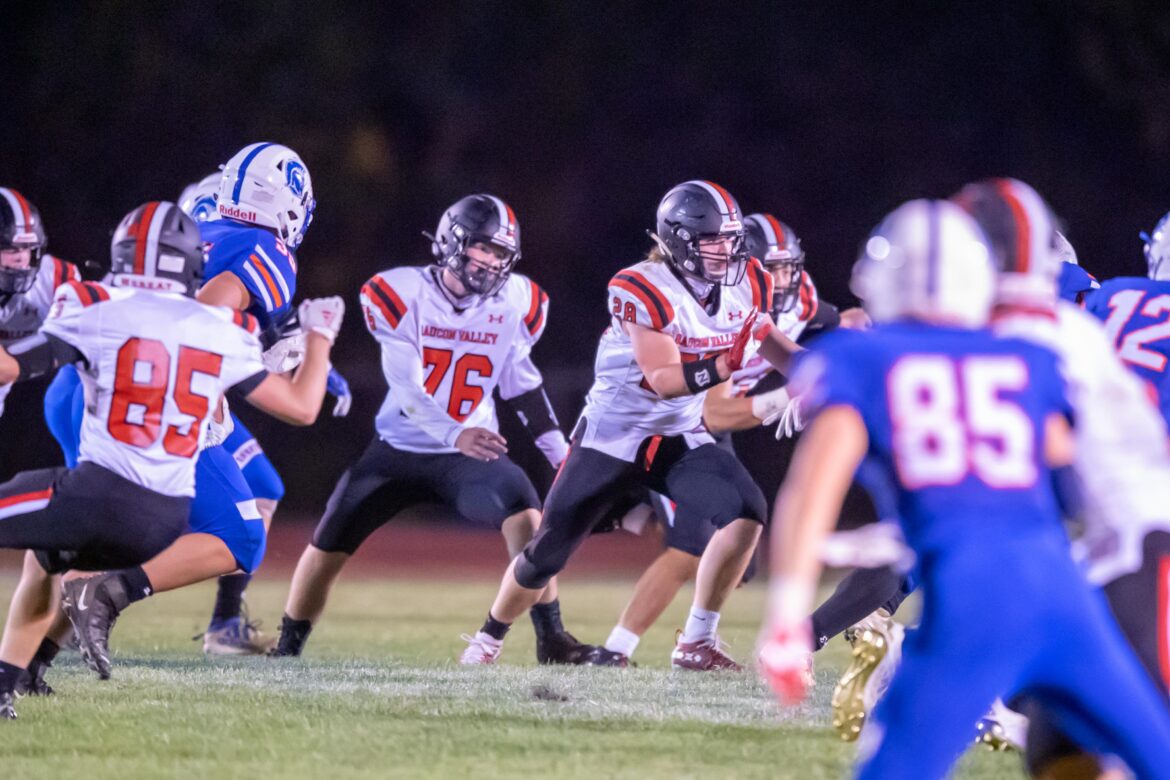 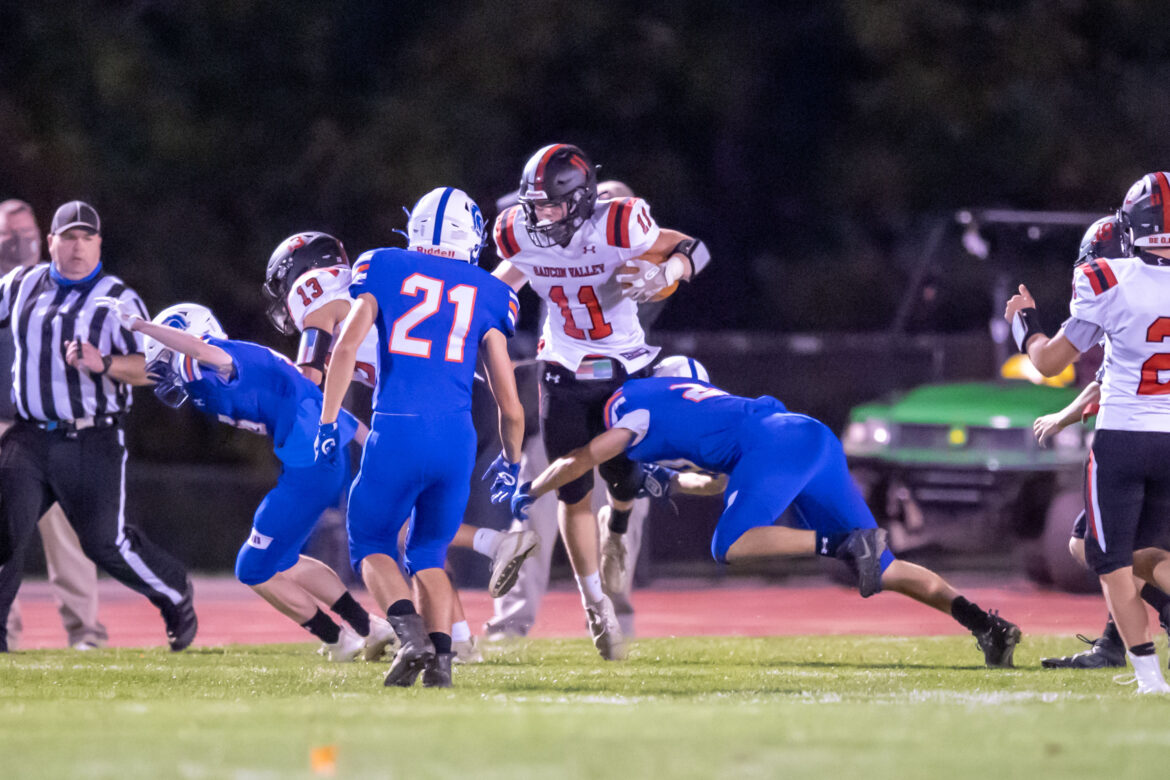 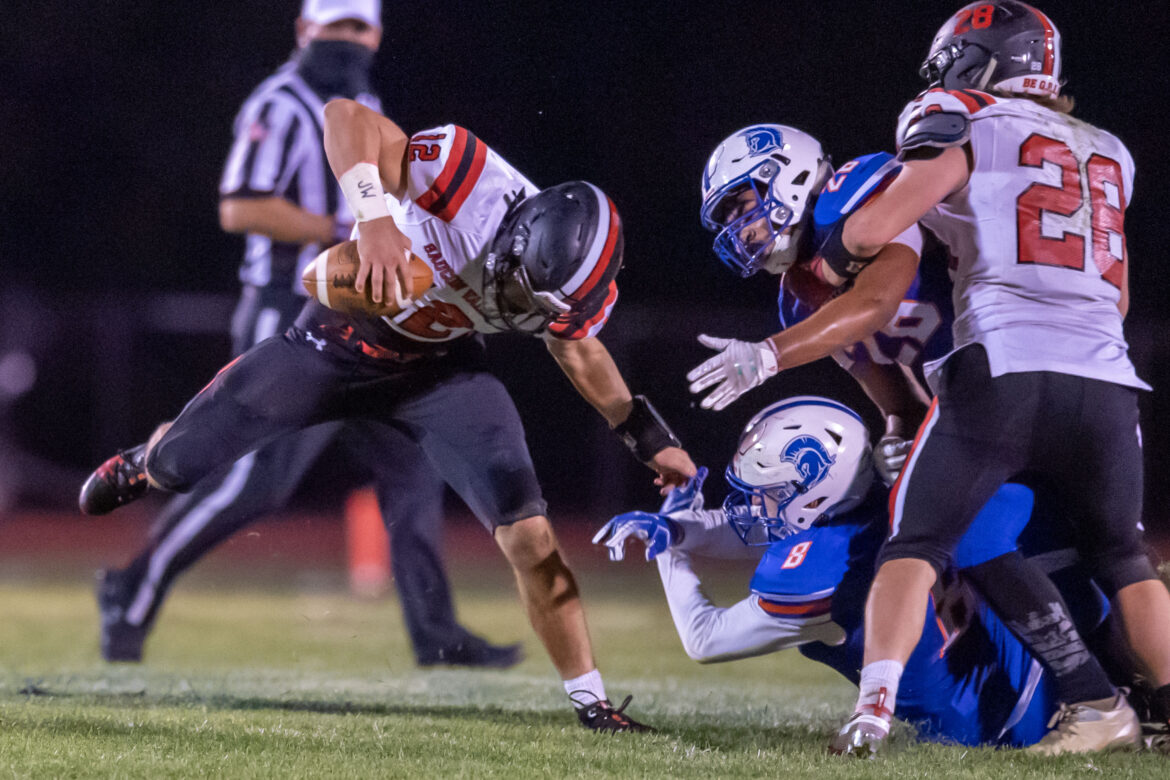 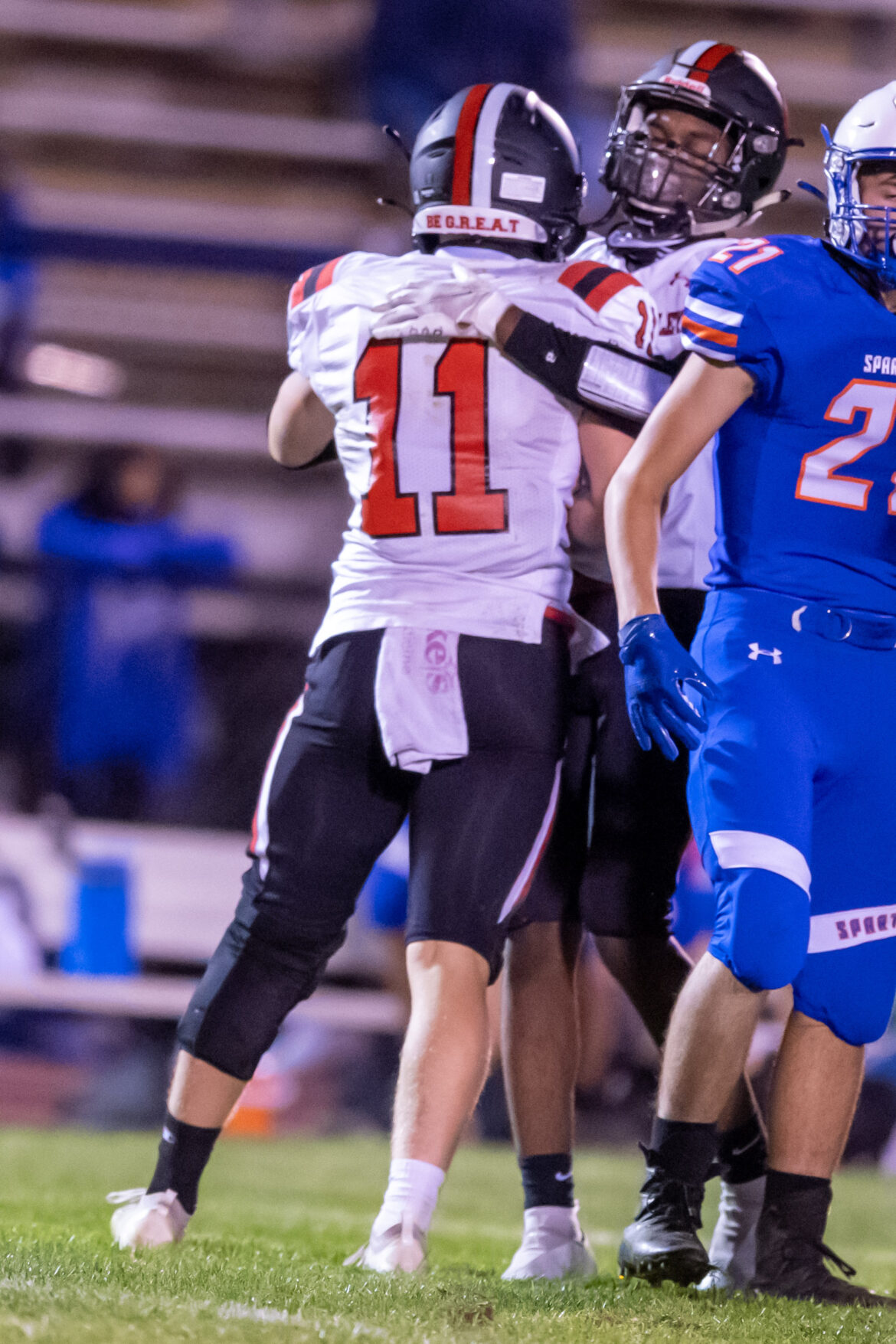 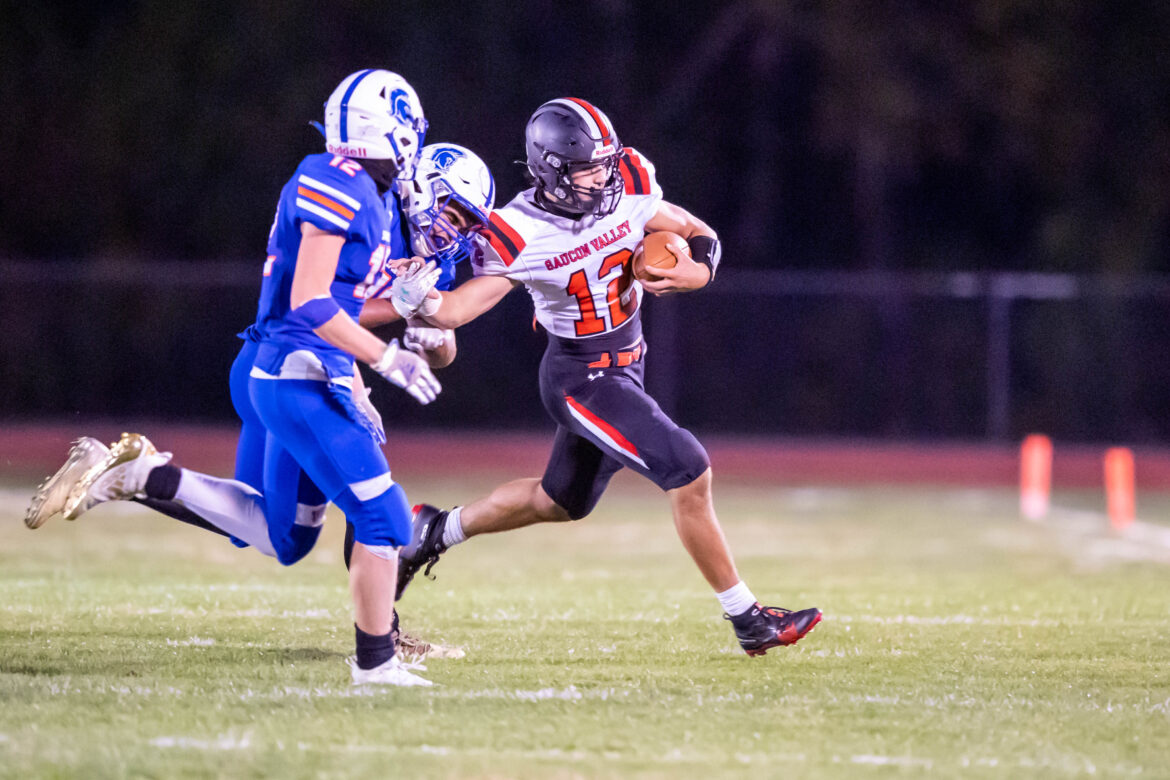 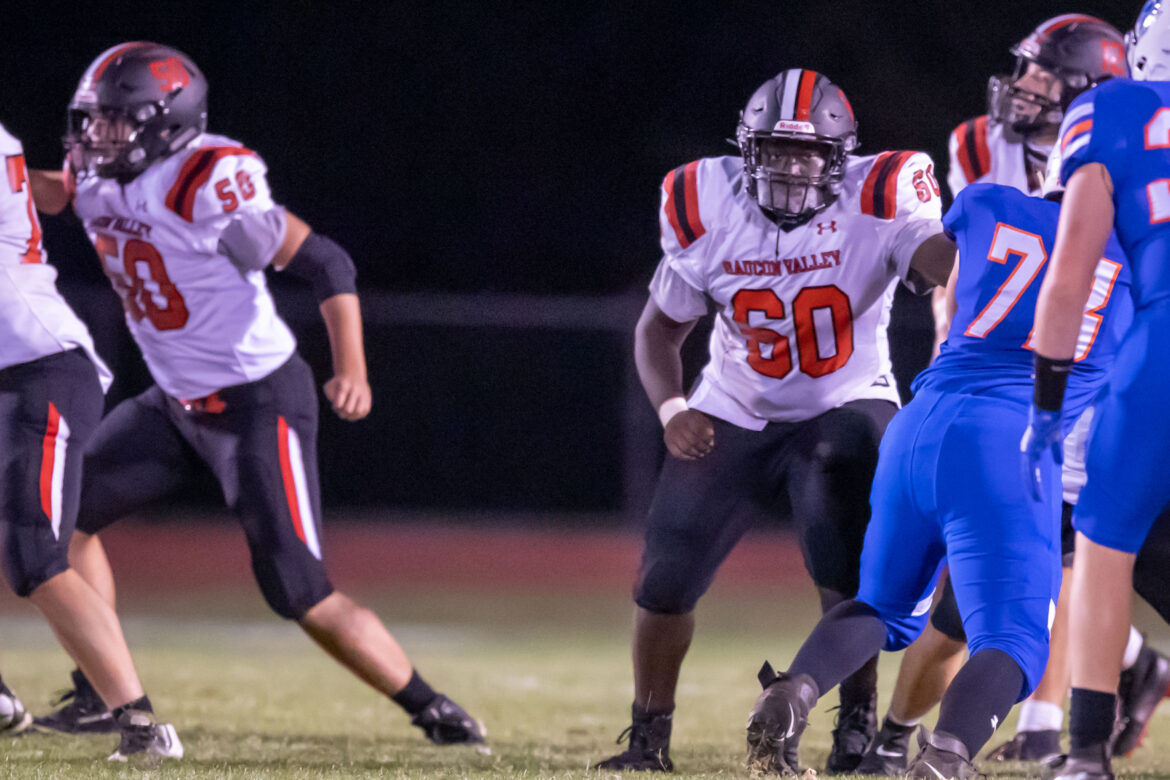 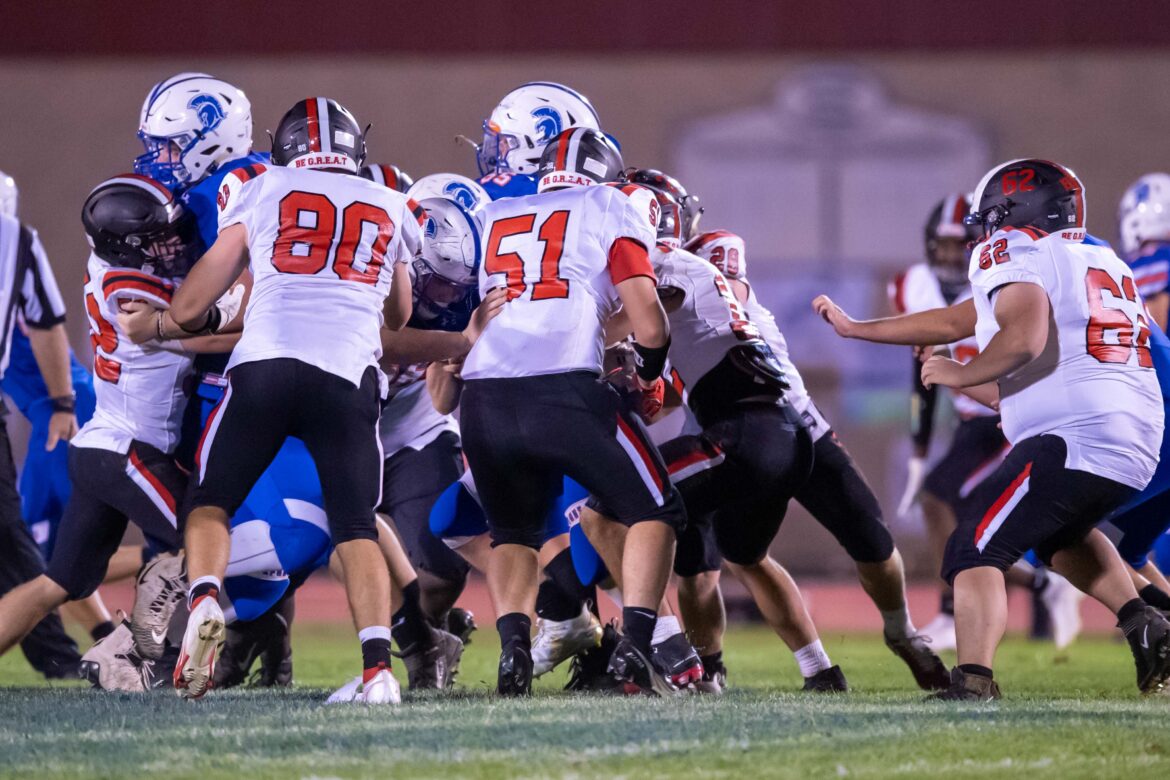 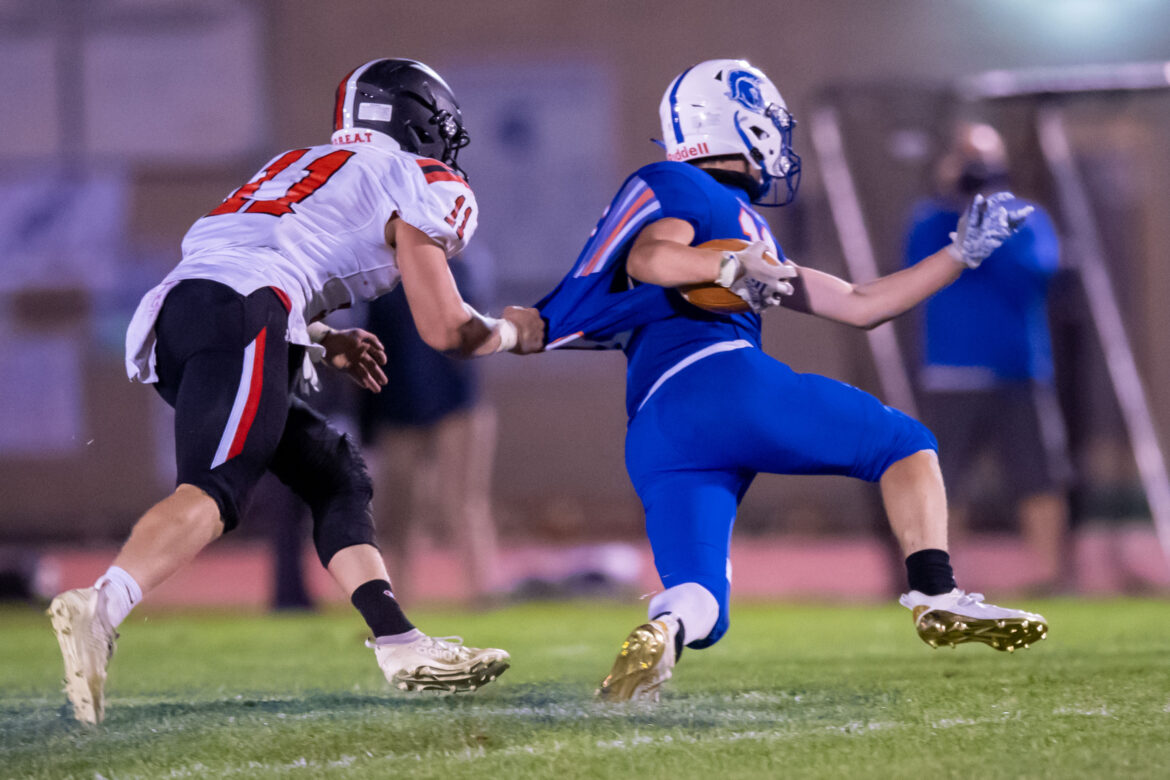 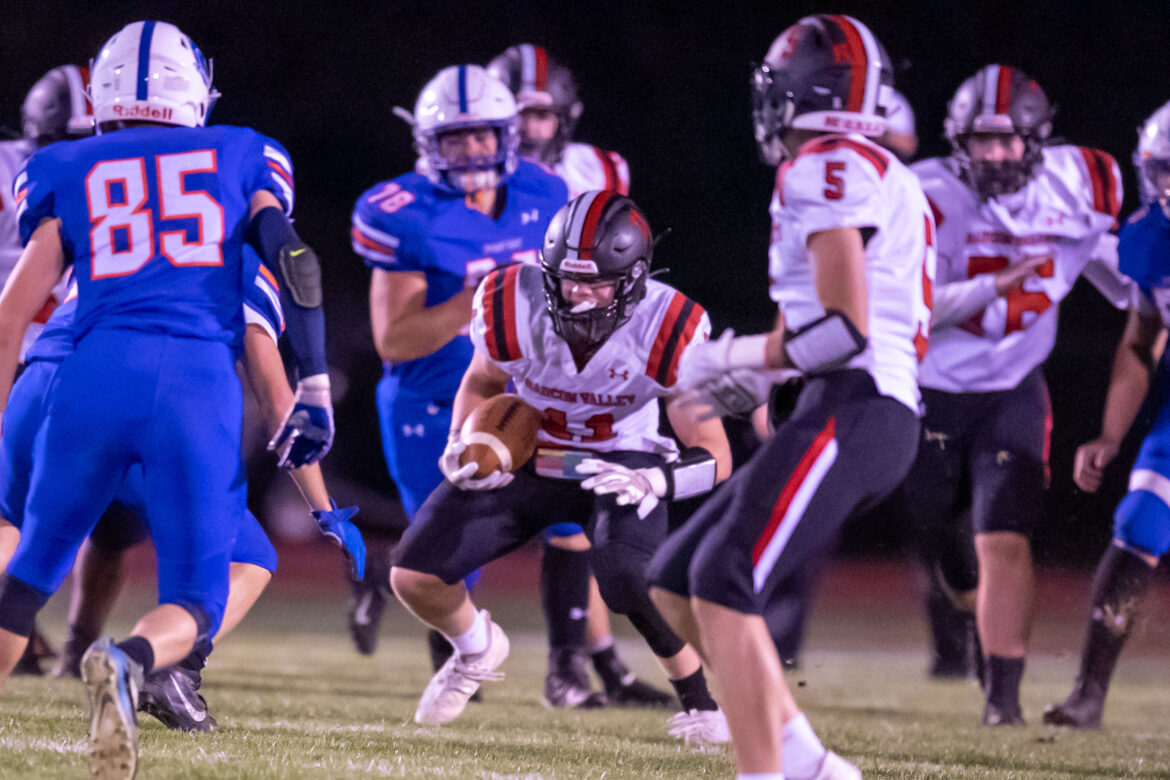 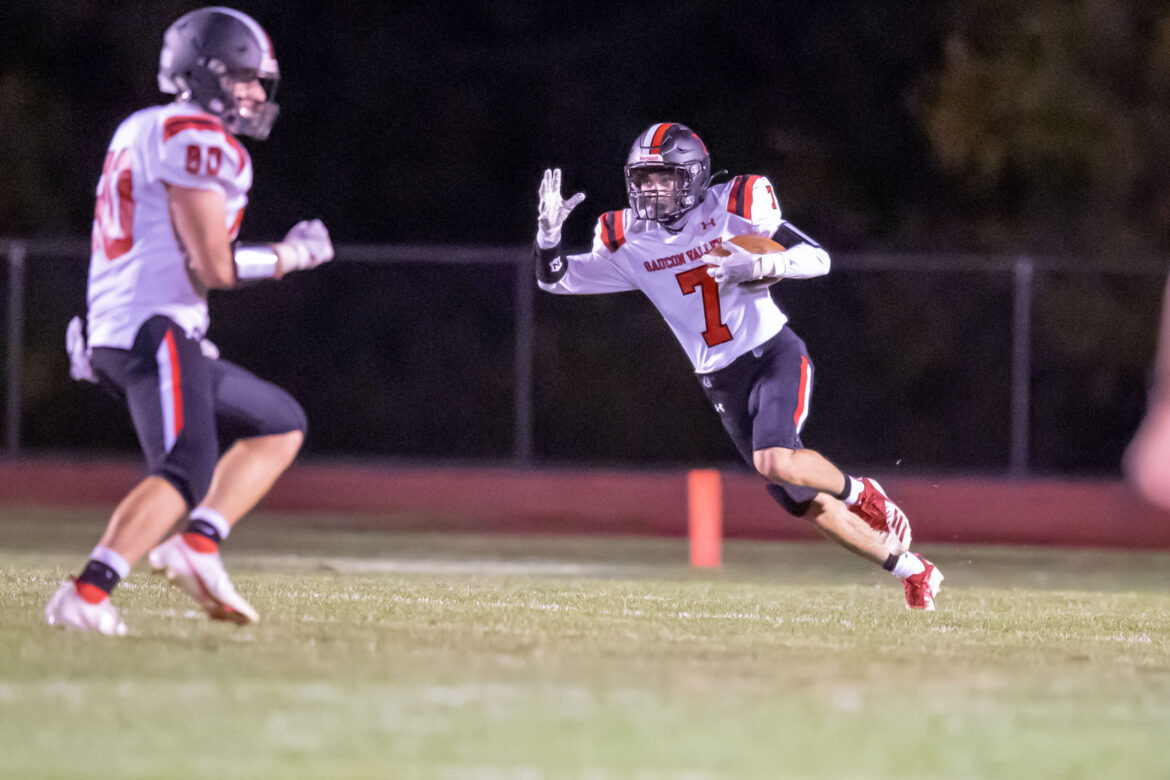 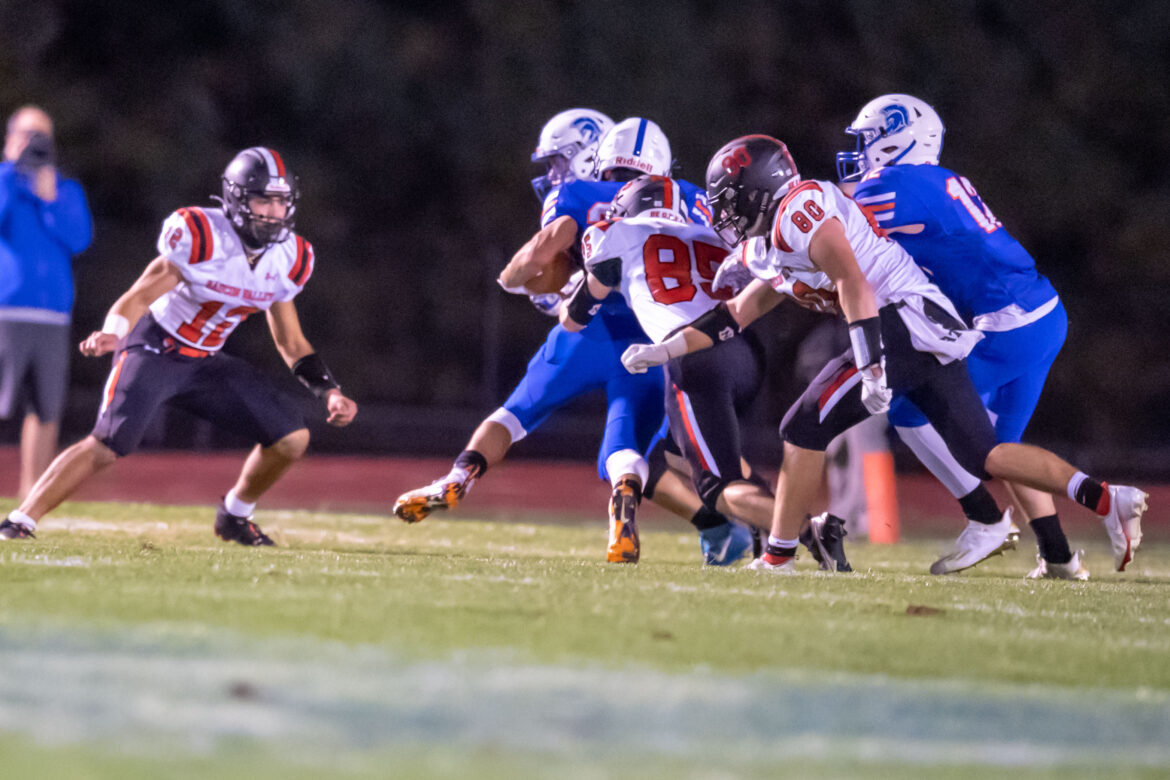 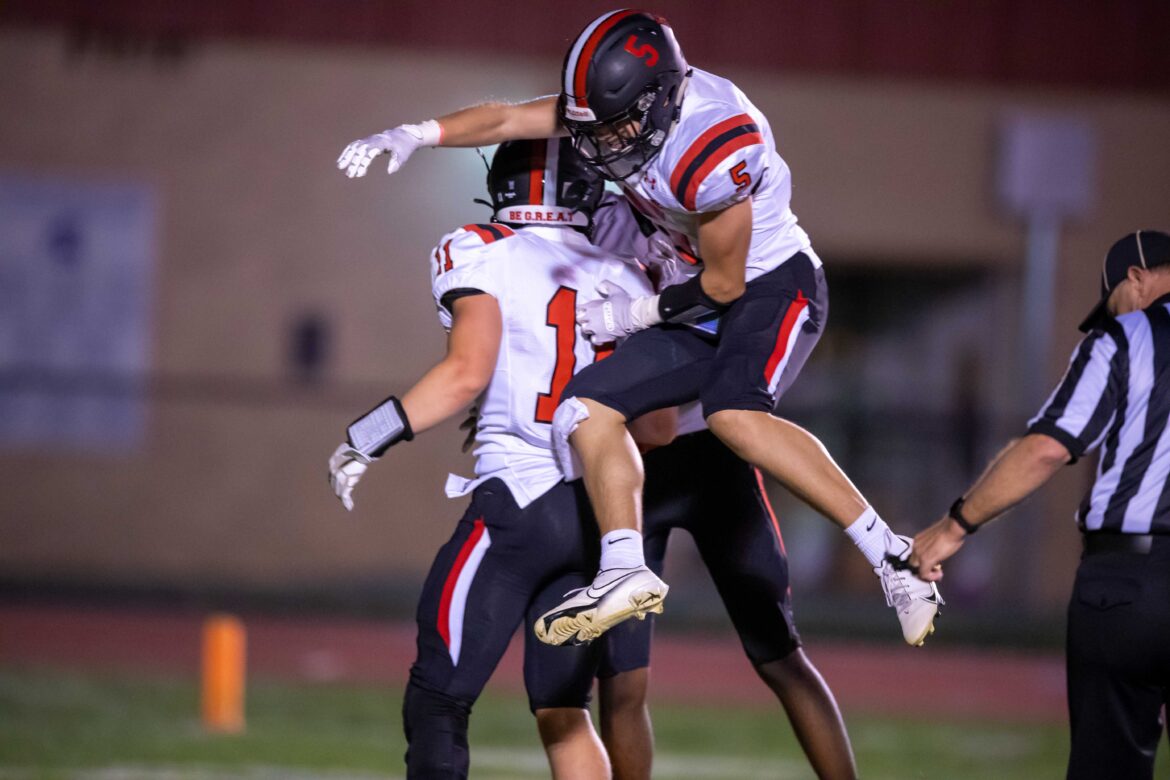 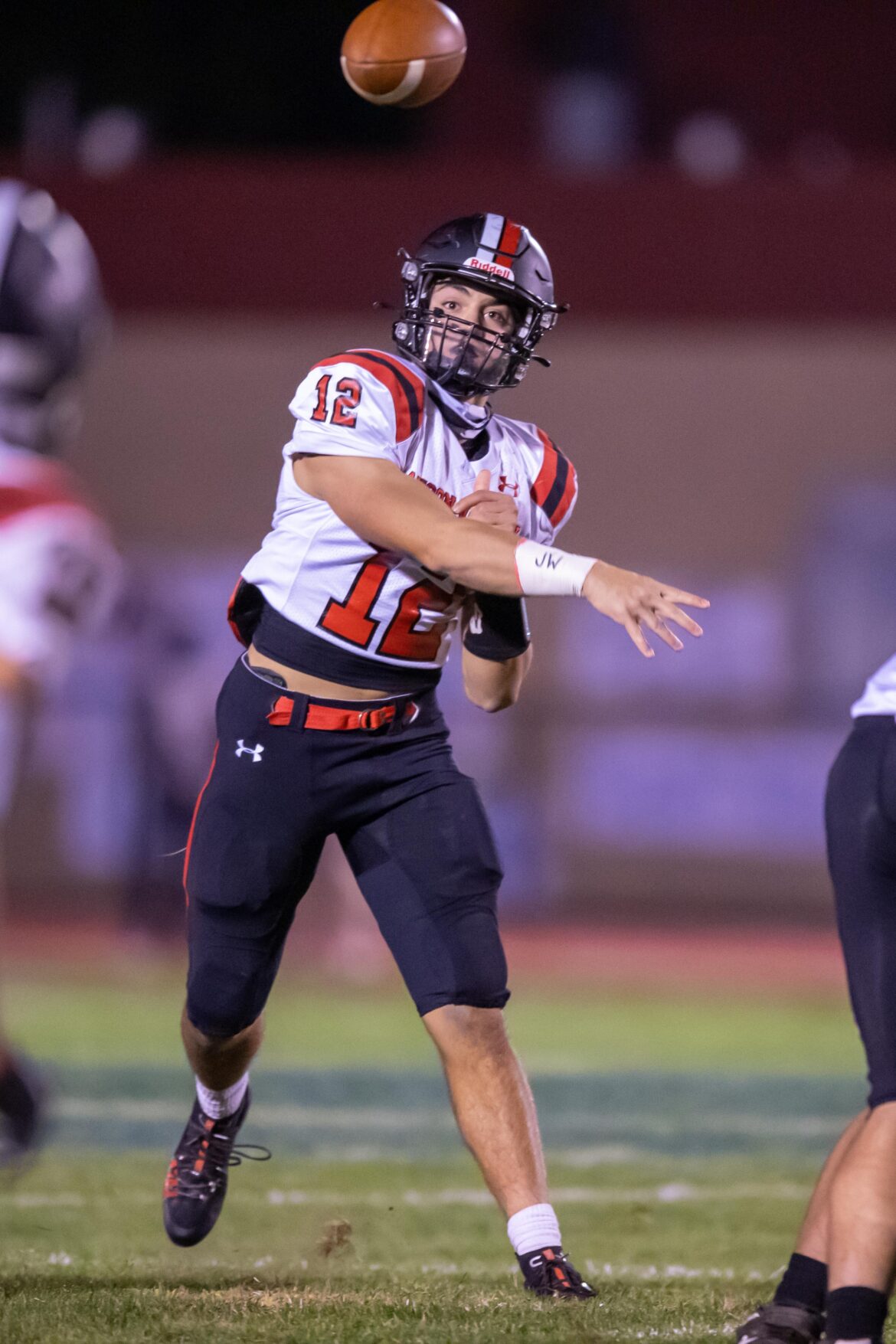 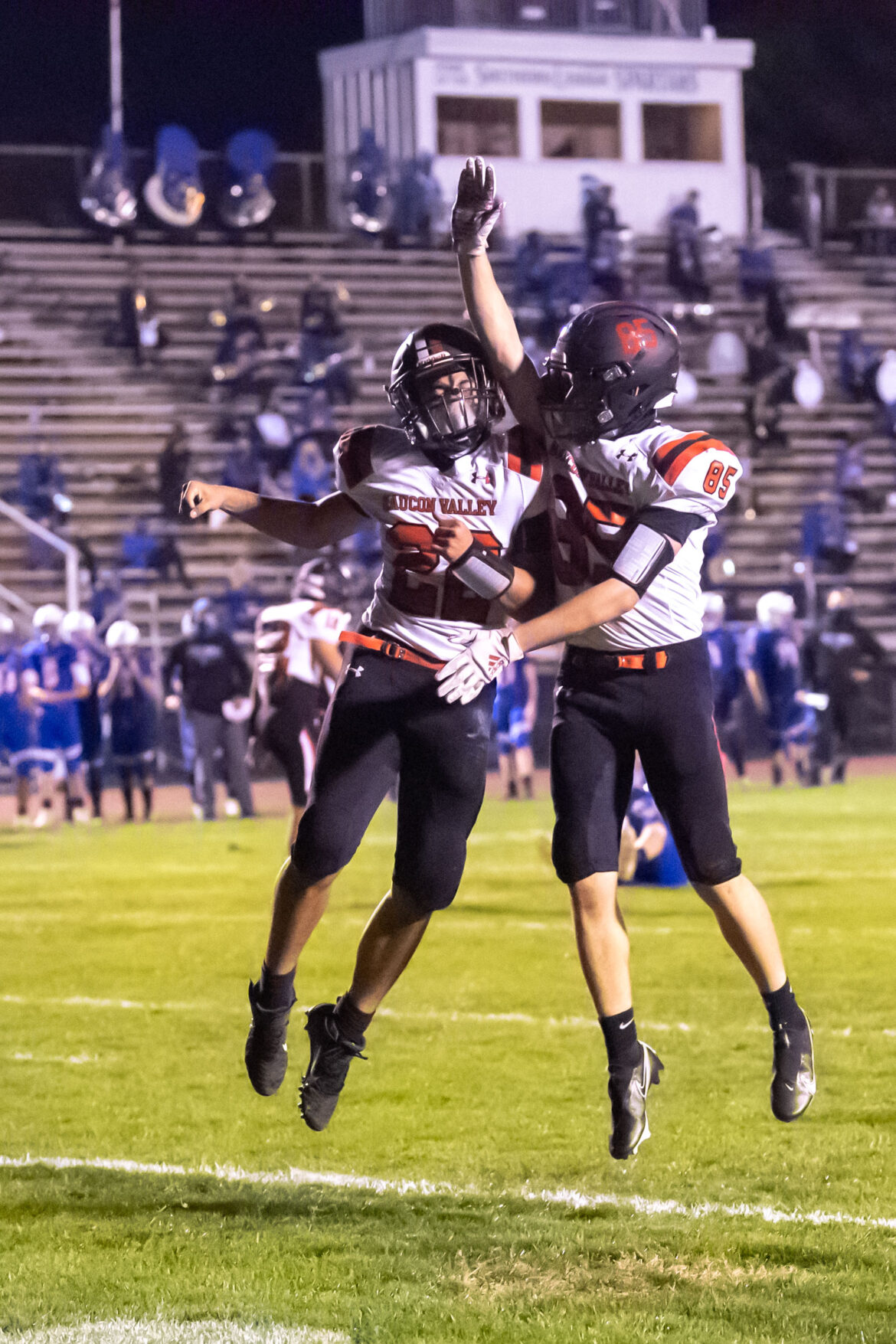