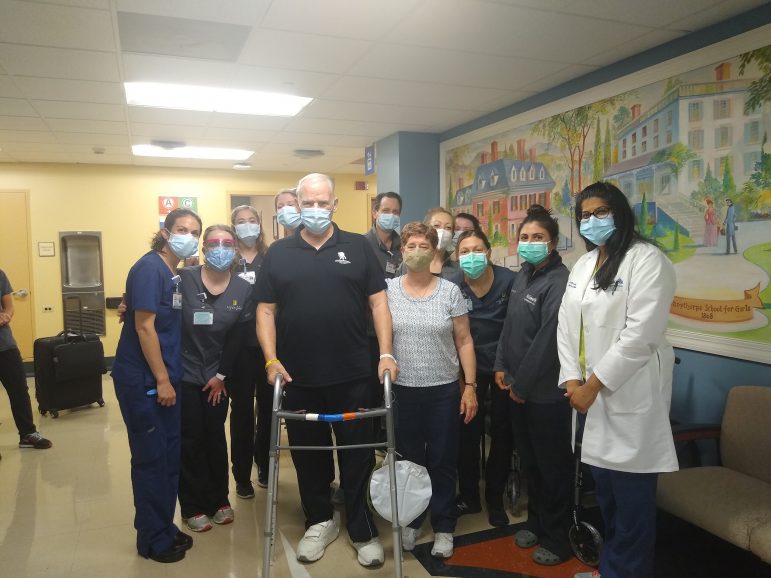 Tom Brugger was living the good life as a 70-something semi-retiree. Healthy and high-energy, his days were a mix of exercise, walks with his wife, Joanne, and a part-time job in bar security.

Then COVID hit in March, and their nightmare began.

Over the next six months, St. Luke’s skilled and compassionate caregivers refused to let the virus claim Tom’s life, as it did so many others. Through inpatient care and extensive home-based rehab, St. Luke’s doctors, nurses and therapists used all their knowledge, medicines and treatments to wrest Tom from the virus’s grasp.

The symptoms started mildly enough. At first, Tom and Joanne each had a minor cough and fever. After three days, Joanne had improved.

But Tom got worse…much worse. His temperature soared and his breathing became more and more labored as the virus raged in his lungs.

The 74-year-old Bethlehem Township man went to the St. Luke’s Anderson Campus emergency room and was soon put in the ICU. His blood oxygen saturation level plummeted to 50 percent, almost half of what’s considered normal. He was connected to a ventilator to help him breathe and improve his lung function.

“Tom was one of the first COVID patients admitted to the ICU,” said Jeffrey Jahre, MD, infectious disease specialist and St. Luke’s Senior VP of Medical Affairs, who treated Tom. “This was the start of the pandemic and we didn’t have many answers.”

Tom gasped as he tried to breathe. “It felt like I was breathing ground up glass,” recalled the retired accountant.

Dreams that he and Joanne had to travel to visit his son and his family in Texas were put on hold. He was transferred to the ICU at the St. Luke’s Bethlehem hospital in Fountain Hill to make room at Anderson for an unexpected flood of incoming COVID victims.

Tom and Joanne were shocked by his rapid decline. The athletic man worked out religiously for years. Despite having had open heart surgery in 2016, he kept himself in good shape and was upbeat.

After a few weeks in the ICU, he was weaned off the ventilator for a day but soon needed it again, as the infection was unrelenting.

Joanne said it was touch-and-go for weeks for her husband of 49 years.

“I’d get a good report one day from a doctor or nurse, and a bad one the next,” she recalled.

She was on an emotional rollercoaster and feared she might lose her husband.

“We didn’t get to say goodbye,” she said.

Conventional medicines for treating viruses and lung infections, and drugs for which there wasn’t yet proven data for being effective against COVID, were administered but with little effect at first, said Jahre. “There wasn’t a rulebook yet for COVID.”

A priest came to Tom’s bedside and gave him the Last Rites, as his condition was so dire.

But the doctors and nurses in the ICU weren’t giving up, using all plausible options to treat him. This early in the pandemic there weren’t many proven medicines yet, said Jahre.

“We tried combinations of hydroxychloroquine, steroids, zinc, vitamin C and a drug to kick-start his immune system,” Jahre said. “That and good, supportive care from the ICU staff were all we had at the beginning of the pandemic.” Most of these treatments, except hydroxychloroquine, are now part of the standard treatment regimen, he added.

Death rates from COVID were staggering, frightening and frustrating medical communities locally and worldwide as they struggled to find an answer for the scourge.

“We were l earning a lot,” said Jahre, “and became early adopters of medicines, like steroids, that are now standard therapies for fighting the virus.”

Tom spent most of the time in the ICU ventilated and in a medically induced coma to give his body a chance to fight the infection.

When he was conscious, he became disheartened at being so sick. But he kept fighting. “I wanted to be here for my family,” he remembered.

After five weeks in the ICU and having undergone many rounds of treatment with different medicines and supplements, Tom’s beathing and oxygen level slowly improved, and his fever fell.

“This was before we even started using convalescent plasma, the antiviral drug Remdesivir and monoclonal antibodies,” he recalled. “While many hospitals were seeing an 80 percent or higher death rate of patients on ventilators early on, at the same time St. Luke’s was internationally acknowledged as achieving among the best results–around 25 percent–through our aggressive treatments.”

Tom was transferred from the ICU to the specialized Acute Rehab Center (ARC) for COVID patients. By then he was off the ventilator and out of critical care, but he needed help getting back on his feet.

“Tom was profoundly weak, and was unable to sit, stand or walk and had trouble speaking, swallowing, breathing and performing most basic living functions,” explained Geeta Sathe, MD, physical medicine and rehabilitation specialist who was Tom’s attending physician in the ARC. “The virus had attacked his entire body.”

Tom received double portions of protein and carbohydrates in his food to bolster his nutrition, so he’d regain the strength and the 60 pounds he had lost.

“I tired so easily at first,” he said. “I couldn’t press the buttons on the TV remote I was so weak.”

His weekly rehab sessions with several rehabilitation experts often totaled some 15 hours and included physical, occupational, speech and breathing therapies that slowly helped him begin to function again. He needed to relearn everything. At times, he was emotional, knowing he had survived a deadly virus that had robbed him of much more than the month he laid in the ICU, his life hanging in the balance.

“At first, he struggled just to move from his bed to his wheelchair and back,” said Sathe.

But Tom was committed to rehab, and he did more.

“He would do extra exercises in his bed at night to gain strength, improve his breathing and get off oxygen,” Sathe recalled. “He really wanted to get better.”

They started to see results in week three. “He started standing with physical assistance and building on the skills he had learned in the weeks prior,” Sathe said. “This was his turning point in his rehab.”

Soon Tom was feeding and dressing himself and standing with a rolling walker more independently for the first time since March.

His outlook brightened. He remained motivated, working harder than ever.

The payoff came in early June, when he was discharged from St. Luke’s ARC, with a plan for him to go home and begin rebuilding his life. St. Luke’s Home Health nursing and physical therapy experts worked with Tom to identify his medical and physical needs and goals for therapy, which would help him reclaim the body he had nearly lost to the virus.

For three months, he worked intensively with St. Luke’s Home Health professionals and his wife to improve his mobility, build his strength, increase his endurance, improve his breathing and learn how to take care of himself at home. These focused sessions of PT and nursing, two to three times weekly, continued for several months until he finally was walking independently, driving and caring for himself without any devices or assistance.

“I’m feeling pretty good now,” he said recently, nearly a year after his COVID nightmare began. He and Joanne walk two miles on most days, and he’s exercising on his own again, continuing to build up his endurance and muscle strength.

He and Joanne have penciled in plans to travel when it’s safe to visit their son and his family in Texas and celebrate their 50th wedding anniversary in August. Tom also has a daughter and granddaughter who live locally. He said he’s grateful to St. Luke’s that he beat the virus that has claimed more than 400,000 Americans’ lives. And he received the first dose of the COVID vaccine on Jan. 24 at the St. Luke’s Anderson Campus, a first critical step in establishing virus immunity.

“I owe so much to St. Luke’s for saving me,” he said. “I got extraordinary care there; the best I could get when I needed it the most.”

Tom was able to pay the ARC a return visit a few months later, to the delight of the staff.

“Tom was one of the sickest COVID patients we saw in the ARC, but he’s made so much progress,” said Sathe. “He’s like a new man.”