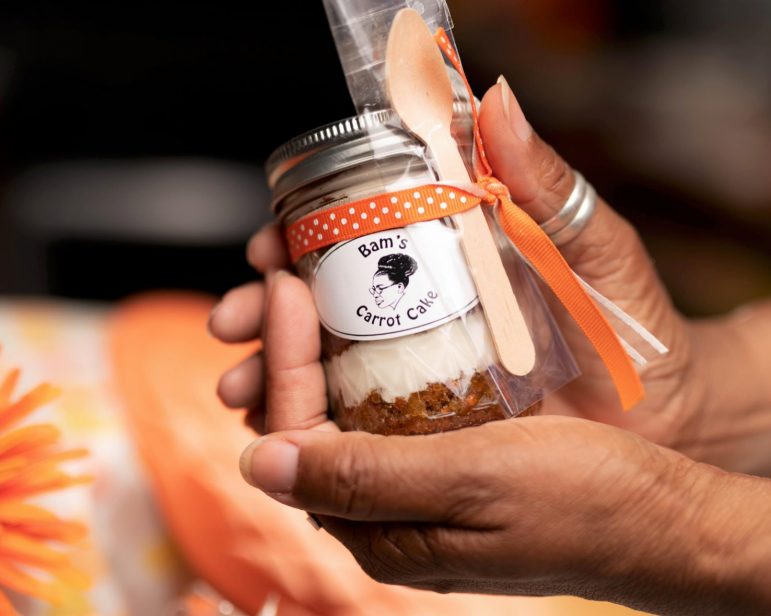 Nestled away in the kitchen at Dewey Fire Company in Hellertown is where you can find Paula McKinnis baking her mother’s beloved carrot cake recipe. Carefully, she cuts sheets of the cake into smaller circles, and stacks layer on top of layer inside a jelly canning jar, with a spread of heavenly cream cheese icing in between each one.

She then ties an orange bow around the jar, securing a small wooden spoon over a sticker containing a hand-drawn image of the late Carolyn McKinnis, the recipe’s author. The final product is a moist, delicious carrot cake in a jar, and it’s the staple product of Bam’s Carrot Cake.

Little about the family recipe has changed since McKinnis started recreating the carrot cake in the mid-2010s. The only alteration was the addition of sour cream to keep the frosting from becoming too sweet.

“But she (Carolyn) knew before she passed away that that’s what I was doing, so I had her permission!” McKinnis joked.

Anyone who talks to McKinnis about her carrot cakes will quickly learn they are a special reminder of her mother, and baking and selling them has turned into a labor of love. 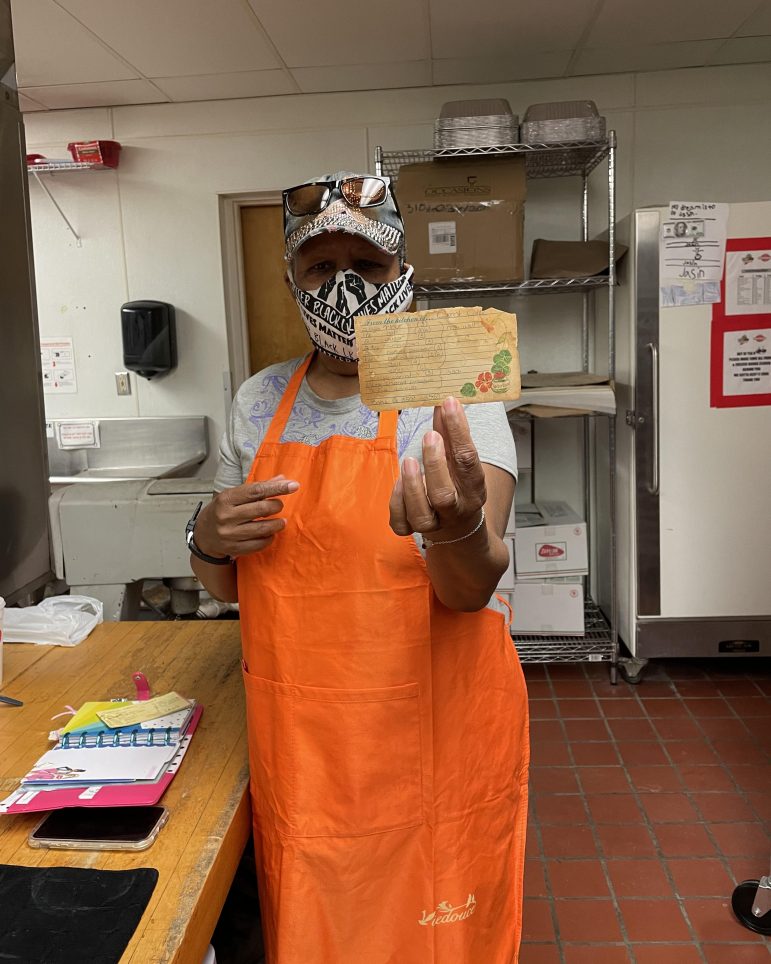 The name itself pays homage to McKinnis’ late son Denero, who would affectionately call his grandmother Bam Bam.

“I do this for my mother. When I make the cake it’s not a job at all,” she said. “I see her every time I make it, and I see her pointing her finger at me telling me if I’m doing it right!”

In fact, not only does McKinnis keep the original, handwritten recipe with her, but she also uses her mother’s original sifter to this day.

McKinnis first started making the cake for a fundraiser. When the cakes were met with overwhelming approval (and requests for more), McKinnis told her mom she wanted to begin selling them.

“Mom was like, ‘Nobody’s gonna buy my cake!’” McKinnis laughed.

McKinnis already knew her mother was wrong, so she began experimenting with different ways of baking and packaging it.

“Right before she passed away I was on Etsy, and I saw people doing cakes in a jar,” she said.

McKinnis saw all kinds of cakes in jars on Etsy, but there was one kind she couldn’t find–carrot cake. She recommended to her friend and business partner, Althia Ashmeade, that they try that packaging approach with Bam’s.

“I put some in a jar, and people liked it,” McKinnis said. “It’s easy, it lasts three weeks. I mean, you can just leave it.”

With the formula down, McKinnis began producing her carrot cakes in significant quantities around 2017. Some four years later, McKinnis is ready to add a second product to the Bam’s line, and this time it’s being made using her own recipe.

“My sister said to me, ‘Why don’t you make the 7 Up cake, you did that one for years!’” McKinnis said.

As the name implies, the newest Bam’s cake is made using the popular citrus soda, 7 Up. McKinnis describes the new cake as a really light and lemony cake, accompanied by a lemon glaze instead of frosting.

McKinnis’ path to her second product is similar to the path that led her to Dewey’s kitchen in the first place. Both had twists and turns, but McKinnis has always been guided along the way by family and friends.

In the early days of making Bam’s cakes, McKinnis operated out of Common Space, an Easton-based shared kitchen space. 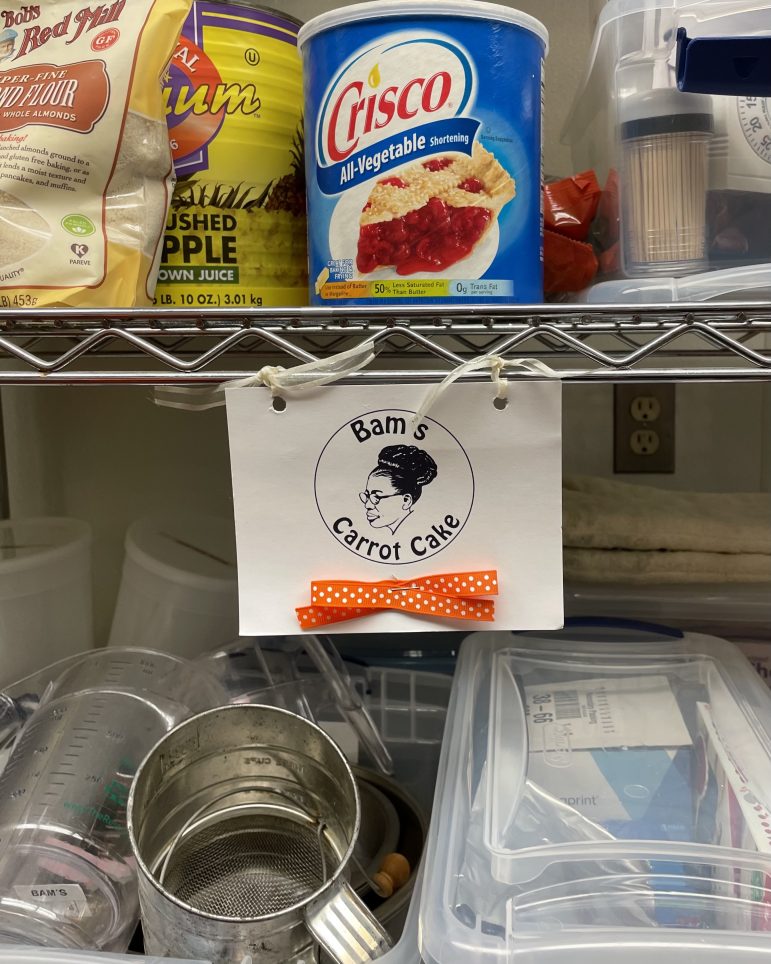 Bam’s logo features a hand-drawn image of the late Carolyn McKinnis, who developed the recipe. The company’s logo and iconic bow are attached to a rack in the Dewey Fire Company kitchen, where Paula McKinnis stores ingredients and supplies.

Life, family responsibilities and a global pandemic eventually got in the way of things, and McKinnis found herself searching for a new kitchen out of which to operate Bam’s. Fortunately, one of the people she ran into during her time at Common Space was Chef Joe Stout, who owns local meal prep company ChefMeals and recently became the in-house caterer at Dewey.

Stout has worked in the food industry for more than 23 years, and his extensive time spent working in New York and New Jersey exposed him to the incubator model of shared kitchen spaces.

“They’re great for any kind of startup as a way to capture your overhead and lower your costs as much as possible,” he said. “The food business is a tough business to be in as is, but this is where the incubator space comes into value.”

Stout had been helping build up the kitchen and vendor base at Common Space since last June. When he decided to move his operations to Dewey’s kitchen, McKinnis came with him.

One of his goals at Dewey is to build a shared space kitchen community similar to the one at Common Space.

Stout said the space at Dewey is ideal for 10 vendors; specifically food truck operators, bakers and anyone else who could use dry and cold storage, as well as prep space. McKinnis is the only vendor currently on-site, but Stout said two additional vendors will be in the space soon, leaving more than half a dozen vacancies for other local entrepreneurs.

Stout also specializes in chef-consulting, which he plans on offering to the vendors in the Dewey kitchen at a 50 percent reduced rate.

“It’s not just a shared kitchen space,” he said. “I’m a chef-consultant, so I can mentor people, train people, work with them on their recipes and help source ingredients.”

McKinnis herself has already enjoyed some consulting from Stout in the time she’s been at Dewey. She also finds that the kitchen is tidier, more organized and spread out so she can have her own space out of the way of other chefs and bakers.

“I like this setup better, and I actually like working with Chef Joe,” she said. “Here I have more room for everything and I don’t have to worry about anybody bothering my stuff.”

Bam’s cakes are available for $8 a jar, and can be purchased from their website, or by emailing sweet@bamscarrotcake.com or calling (908) 798-8089.