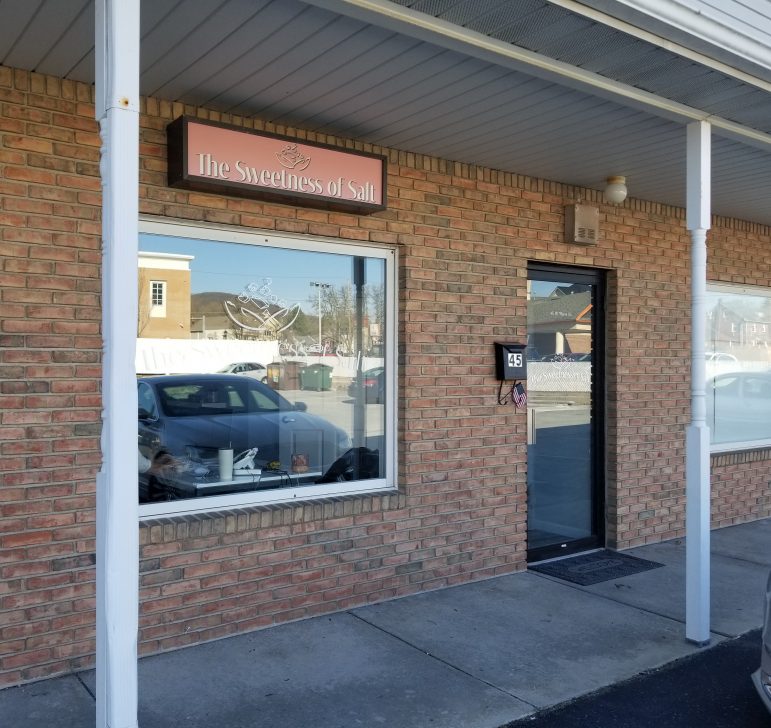 The Sweetness of Salt is a halotherapy center that will open at 45 W. Water Street in Hellertown on Saturday, April 10. Owner Jillian Rossi has created a darkened salt cave inside her new business, where guests will be able to rejuvenate both their minds and bodies thanks to what she says are the healing properties of naturally-occurring pink Himalayan salt.

What are 2,200 pounds of loose pink Himalayan salt imported from Pakistan doing on the floor of a storefront in Hellertown?

That’s a good question for The Sweetness of Salt owner Jillian Rossi, who says she’s been getting her fair share of inquiries about the halotherapy center she’s about to open at 45 W. Water Street in the borough’s Water Street Plaza. The commercial unit formerly housed Sacred Space, in which various local practitioners of healing arts offered classes.

Halotherapy is the use of salt for therapeutic purposes; something that has been done in natural salt caves in Eastern Europe for many centuries. Believers in halotherapy credit it with everything from lessening psoriasis symptoms to improving lung function.

It’s a relatively new type of healing treatment for many Americans, and that’s why Rossi said so many people are curious about the salt cave she will officially open during a Hellertown-Lower Saucon Chamber of Commerce ribbon-cutting ceremony on April 10.

A post shared by The Sweetness of Salt, LLC (@sweetnessofsalt)

The approximately 50 percent of people she meets who are familiar with halotherapy are universally excited about having a business specializing it in closer to home, since most devotees currently travel as far as Philadelphia for salt therapy sessions, she explained.

“As far as this area, we believe we’re number one,” Rossi said of The Sweetness of Salt.

A Bethlehem Township native, she said she was drawn to Hellertown by the sense of community in the Saucon Valley. As evidence of that, she cited the fact that everyone from borough officials to chamber representatives has already made her feel welcome. 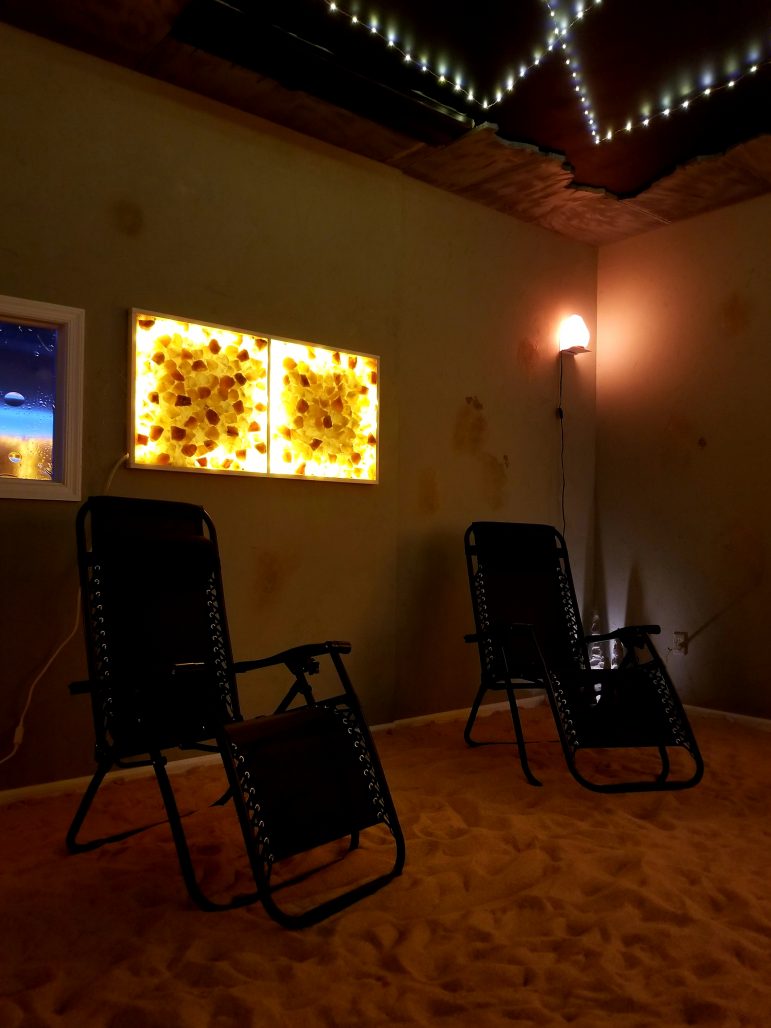 Inside the man-made cave at The Sweetness of Salt in Hellertown are comfortable lounge chairs in which guests will have 45 minutes to relax and meditate as they undergo halotherapy. Adding to the ambience in the chamber will be soothing music. The cave’s temperature will be kept at 68 degrees and each guest will be given a blanket for warmth, owner Jillian Rossi said.

When The Sweetness of Salt welcomes its first customers in April, they will each have the opportunity to enjoy a 45-minute session in the salt cave for $35. The room is equipped with zero-gravity loungers, and each patron will be given a blanket, since the temperature is kept at a constant 68 degrees. Soft, soothing music will add to the ambience.

Shoes must be removed before entering the darkened chamber, but socks are required when walking across the salt-covered floor. Other COVID-19 safety precautions including mask-wearing will be followed according to state guidelines.

“Most people just want to feel the salt under their feet,” Rossi said of the cave.

Salt particles will also infuse the air inside it, and the cave will eventually be used for everything from hosting yoga classes to massage therapy to crystal healing workshops.

“We have some great contractors that we’ll be bringing in here,” confirmed Rossi, who is a reiki master as well as a certified spiritual counselor. “I have quite a few friends in the same circle who do similar things.” 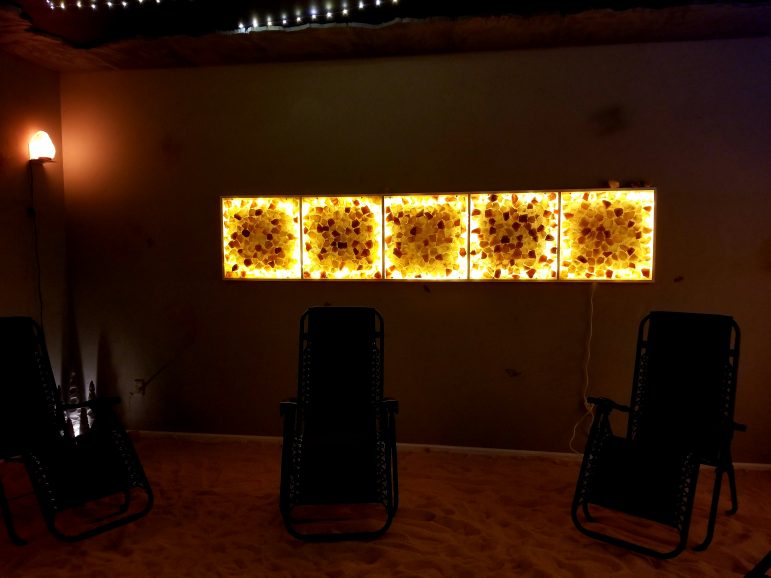 The walls inside the halotherapy room are distressed to resemble those of an actual cave. Affixed to them are large pink Himalayan salt crystals, which believers in the therapy credit with the power to heal both the body and mind.

Almost any therapeutic service can be enhanced if it is offered inside the halotherapy room, she said, noting, “we’re going to make it the most relaxing experience possible.”

Rossi said halotherapy benefits brain function because the salt used in it releases negative ions, which proponents believe have the power to help improve mental acuity.

Unfortunately salt has gotten a bad rap over the years due to its frequent association with poor dietary choices related to hypertension, but the irony of that stigma, Rossi said, is that halotherapy is believed by practitioners to help lower blood pressure.

“The more people that know about it, the better,” she said.

The business also sells pink Himalayan salt for culinary and other uses.

More information can be found online at SweetnessOfSalt.com and on The Sweetness of Salt’s Instagram and Facebook feeds. 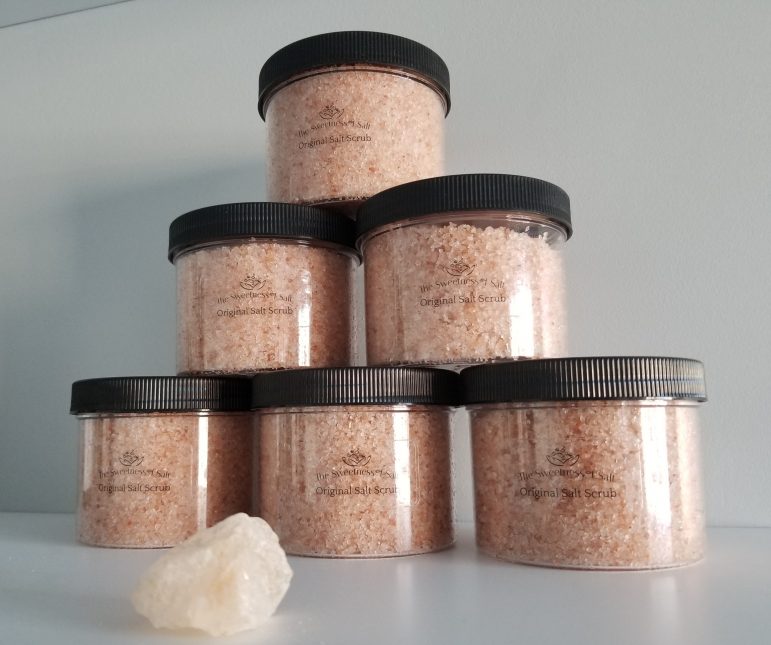 Containers of pink Himalayan salt scrub are sold at The Sweetness of Salt, a new halotherapy center in Hellertown. 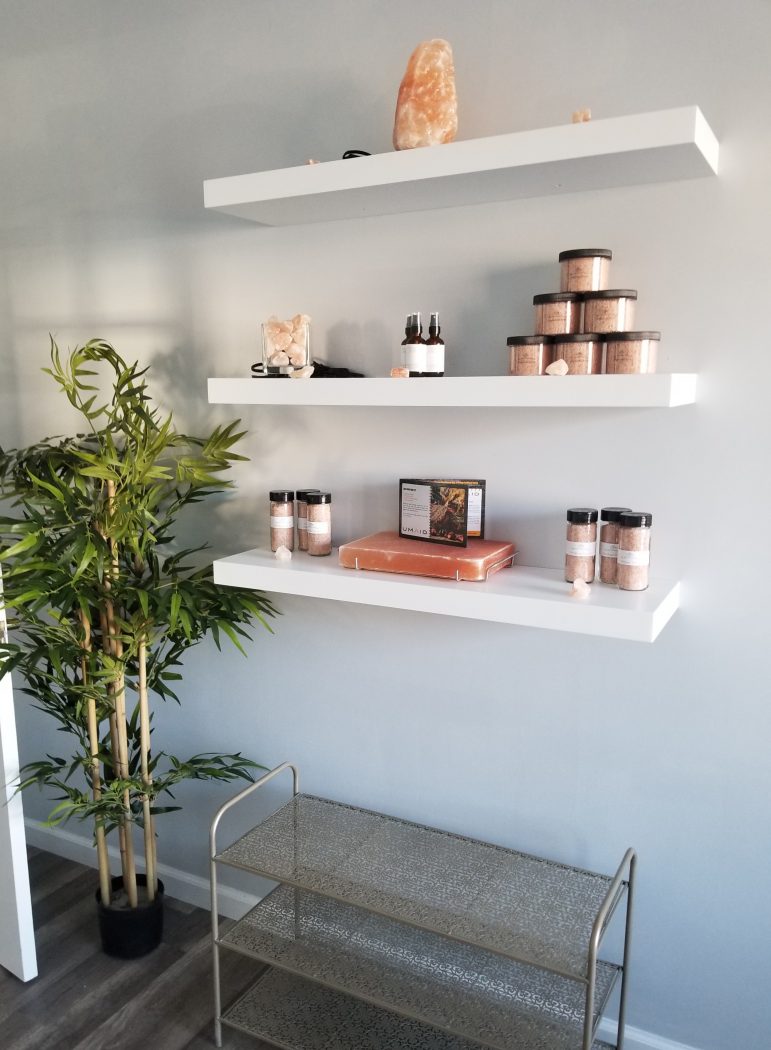 Shelves contain some of the halotherapy-related products The Sweetness of Salt will sell when it opens to the public April 10.