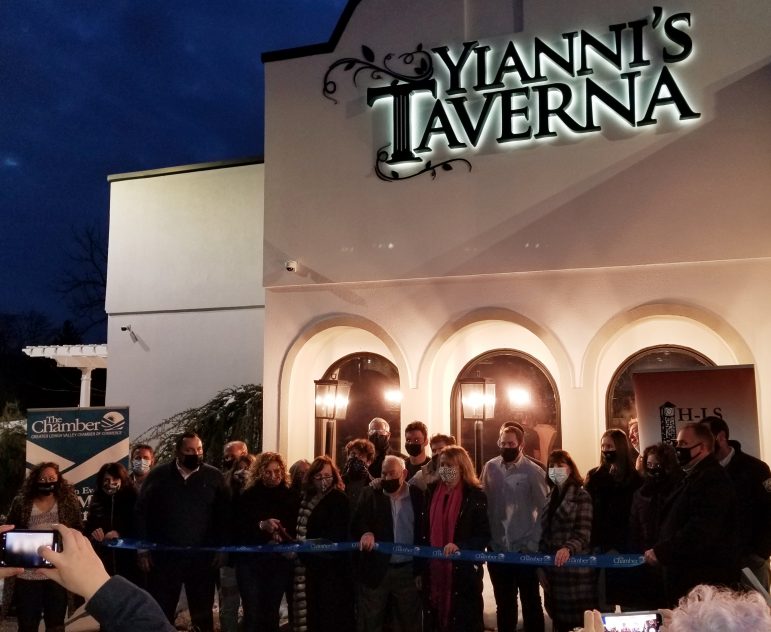 The Hellertown-Lower Saucon Chamber of Commerce board of directors, members and elected officials helped Yianni’s Taverna celebrate their recent reopening with a ribbon-cutting ceremony held at the restaurant on Tuesday at 5:30 p.m. The event was originally scheduled to be held in late January, but had to be rescheduled due to inclement weather.

It was an event nearly four years in the making, and a little snow on the ground–or a lot–wasn’t going to prevent it from being held.

Dozens of chamber members and patrons came out to enjoy the festivities, which included passed hors d’oeuvres inside the renovated eatery on Old Philadelphia Pike. 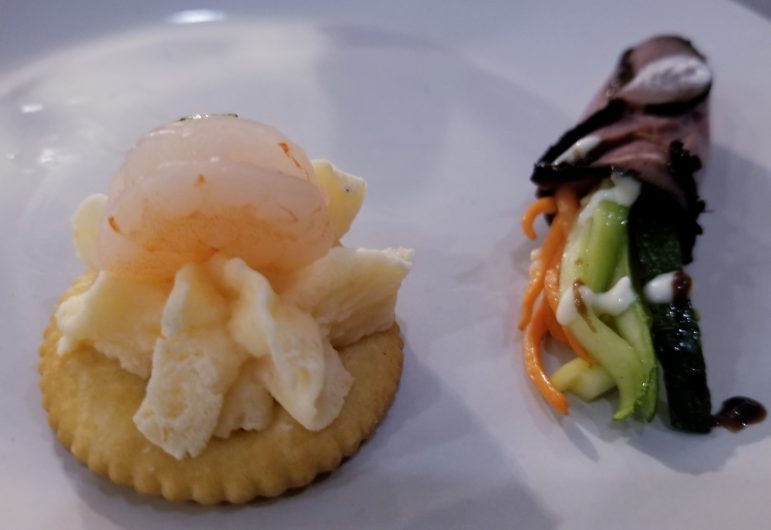 Finger foods were served at the ribbon-cutting and grand reopening at Yianni’s Taverna. Guests also had the opportunity to stay for dinner. The restaurant is open Tuesday to Thursday from 4 to 9 p.m., Friday and Saturday from 4 to 10 p.m. and Sunday from 11:30 a.m. to 8 p.m.

Yianni’s was closed for more than three years following a devastating fire in June 2017.

The restaurant held a soft reopening in November, shortly before temporary statewide COVID-19 restrictions shut down indoor dining over the holidays and forced many owners–including the Zannakis family, which owns Yianni’s–to pivot in order to continue serving their customers for Christmas and New Year’s.

The redesigned modern interior at Yianni’s features a large bar located on one side of the new dining room. Without partitions in between patrons, bar seating is still restricted in Pennsylvania. However, the openness of the new floor plan allowed patrons at tables surrounding the oval bar to watch from all angles as their drinks were being made.

Yianni’s co-owner Maria Zannakis Manakos warmly thanked attendees and patrons for their “love and support through the years” just before the ribbon was cut outside the restaurant’s entrance.

“We are blessed and honored to have you all out,” she said, “and I think we all need to go inside, warm up, get a drink and some good grub.” That suggestion was met with applause.

For more information about Yianni’s and their offerings, visit their website and follow them on social media. The restaurant is located at 3760 Old Philadelphia Pike, Bethlehem, Pa. 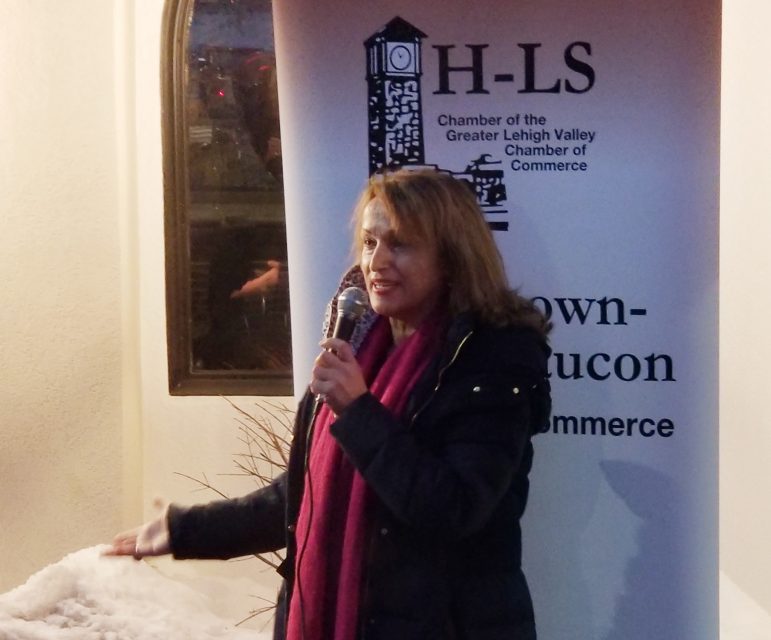 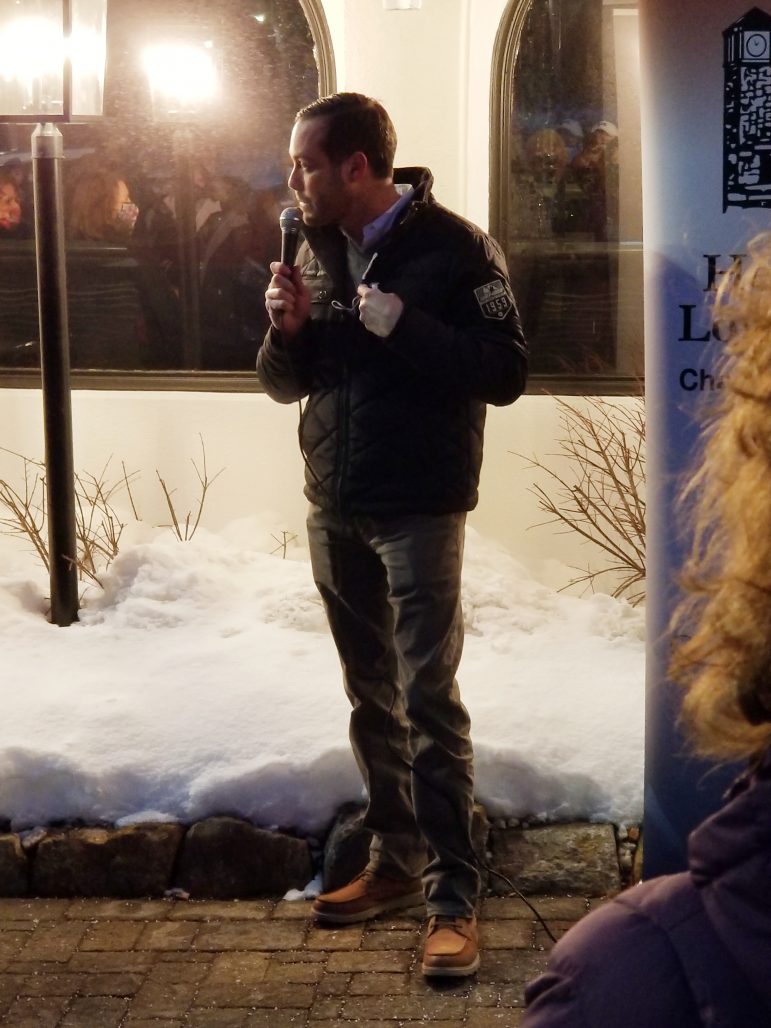 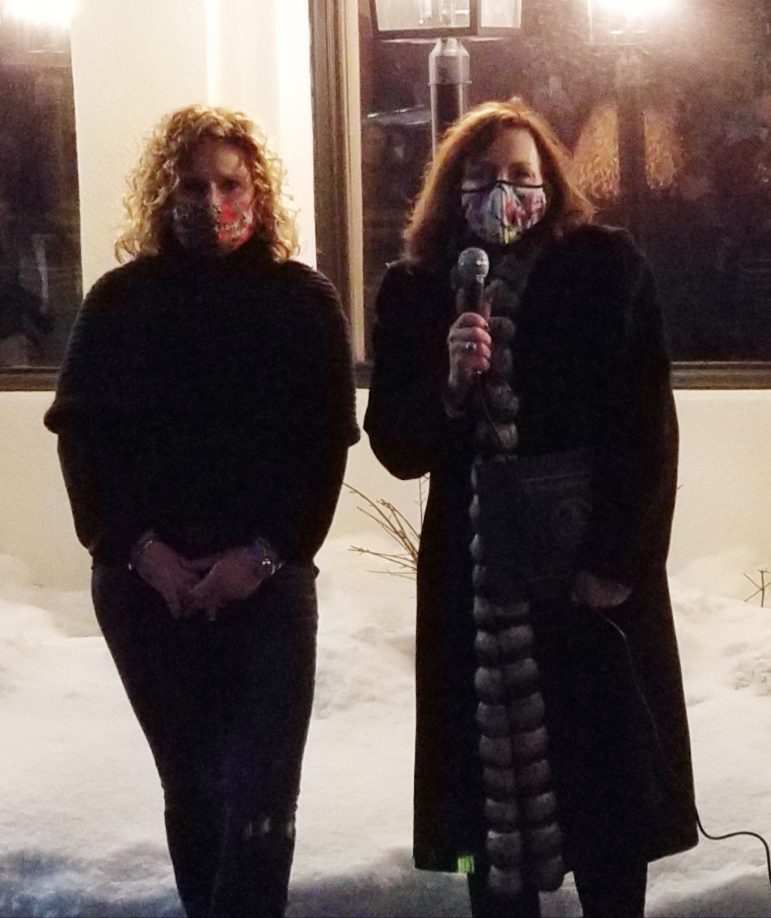 Yianni’s co-owner Maria Zannakis Manakos (right) thanked the restaurant’s supporters at the ribbon-cutting ceremony. Manakos’ sister-in-law and co-owner, Melissa Manta Zannakis, is pictured at left. Despite a threat of snow earlier in the day Tuesday, the weather held and the event went off without a hitch. 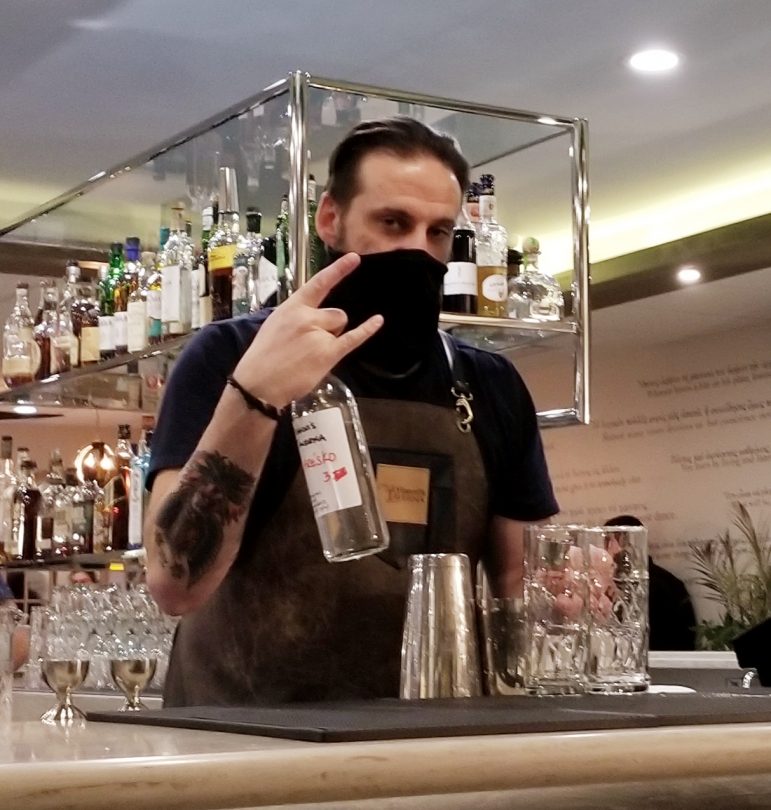 Mixologist Niko was busy crafting a variety of luxurious, European-style cocktails behind the bar at Yianni’s Taverna for most of the evening, but still found time to interact with and educate customers about the drinks he was preparing for them. 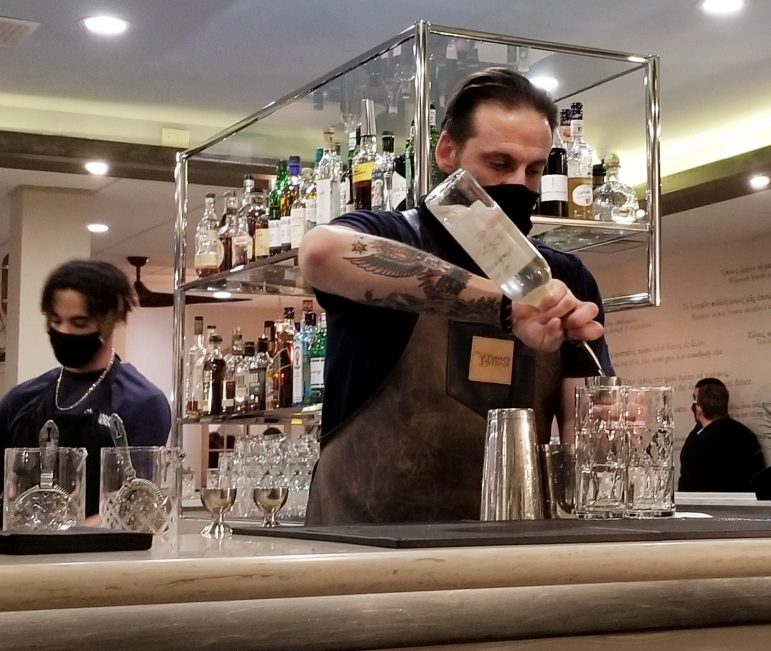 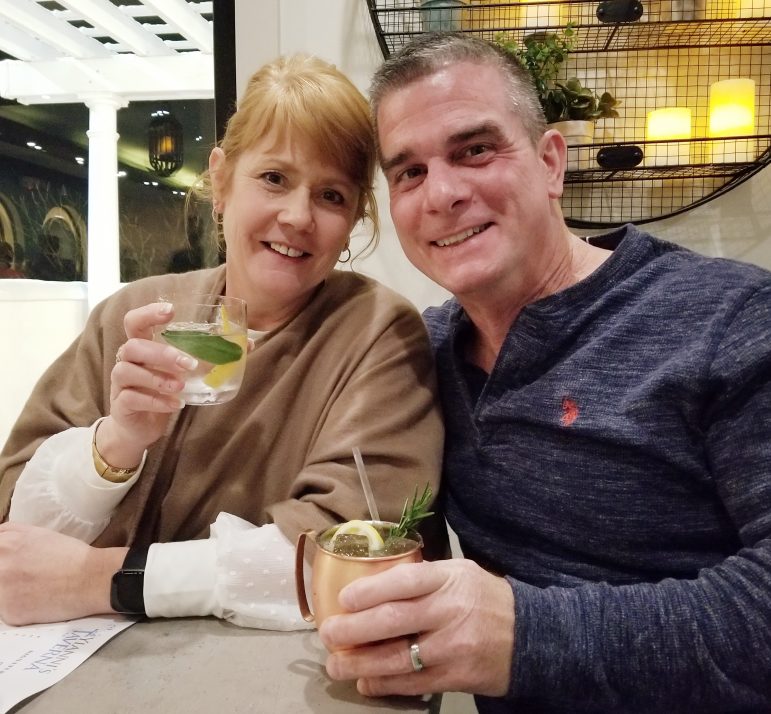 Yianni’s patrons Sandra Thomas and Andrew Boyle said they were excited to help welcome back one of their favorite local restaurants. 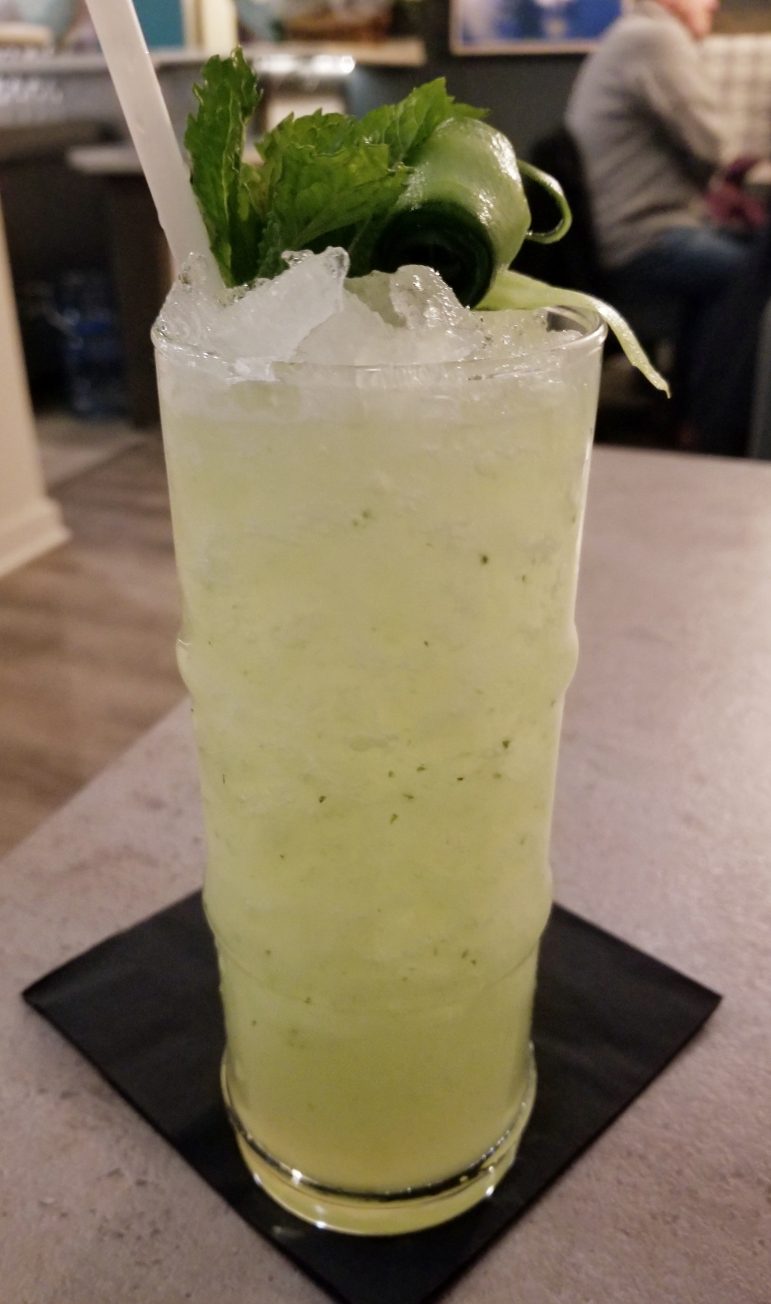 The Fre’sko (Fresh) is a signature Yianni’s cocktail made with gin, mastiha, cucumber, lemongrass, fresh lemon juice and simple syrup. The restaurant’s cocktail list can be viewed on its website. Yianni’s also offers a Happy Hour with mezze flights and drink specials Tuesday-Thursday from 4 to 6 p.m. and 8 to 9 p.m., Friday from 4 to 6 p.m. and Sunday from 2 to 5 p.m. 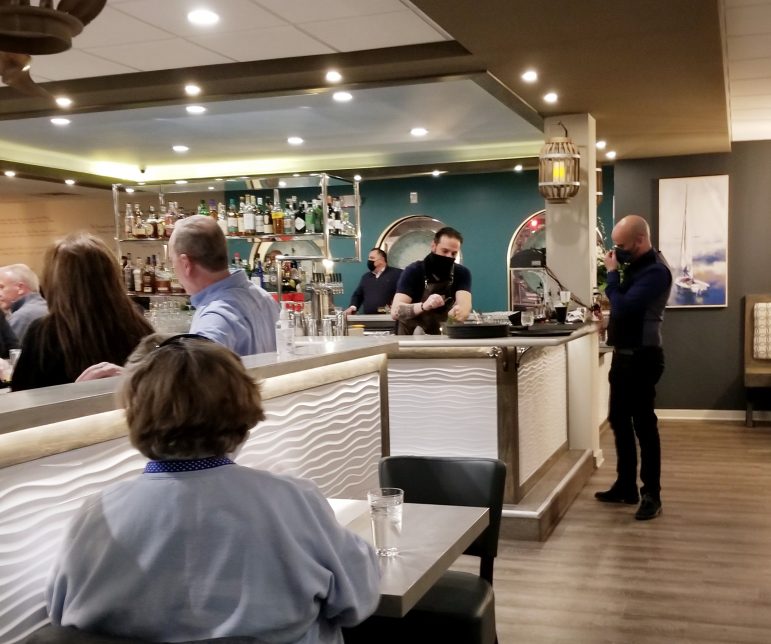 The decor at Yianni’s Taverna is modern with Mediterranean influences. With an openness and large bar on one side, the dining room lends itself to socializing. 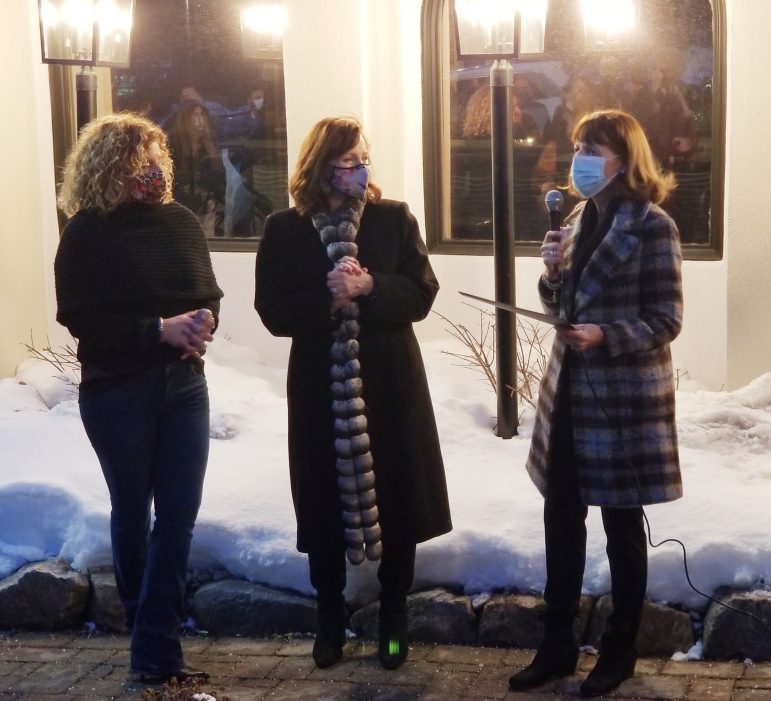 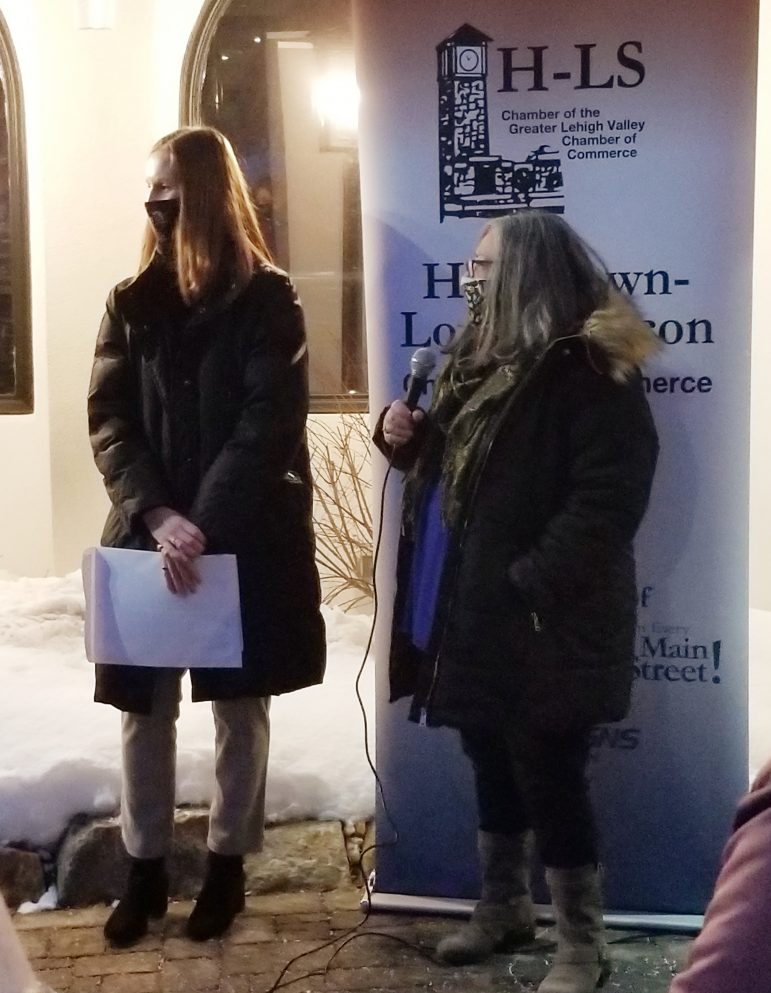 Lower Saucon Township Councilwoman Priscilla deLeon, right, noted the Zannakis’ family’s decades-long history of restaurateurship in the township, which extends back approximately 45 years. Pictured at left is Lauren Bertucci, Manager of Affiliated Chambers for the Greater Lehigh Valley Chamber of Commerce, including the Hellertown-Lower Saucon Chamber. 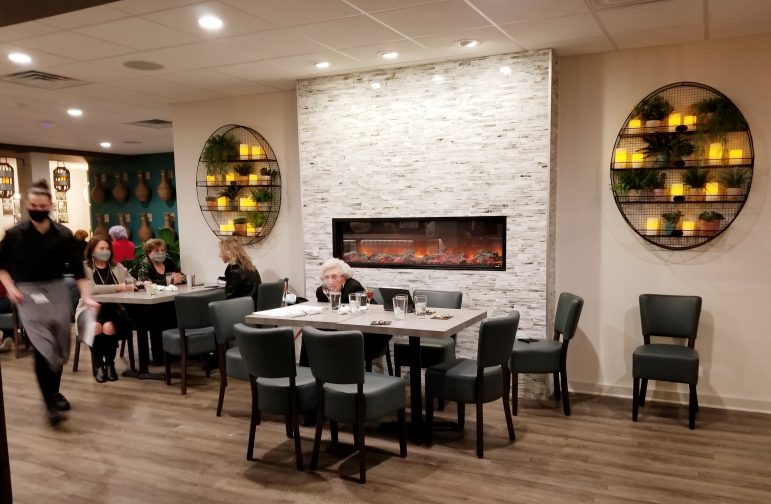 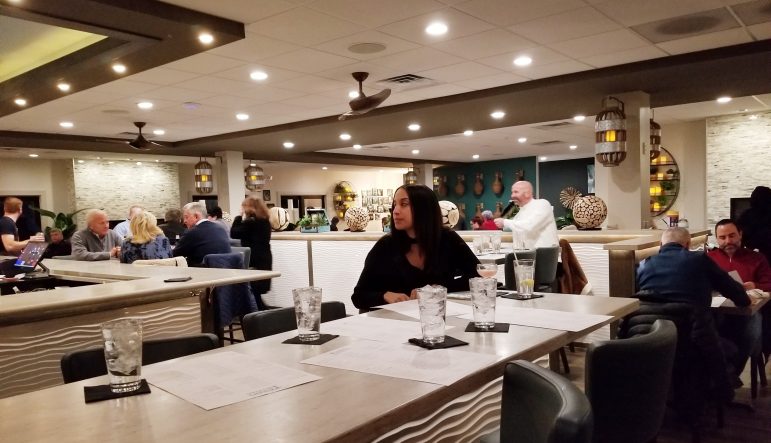 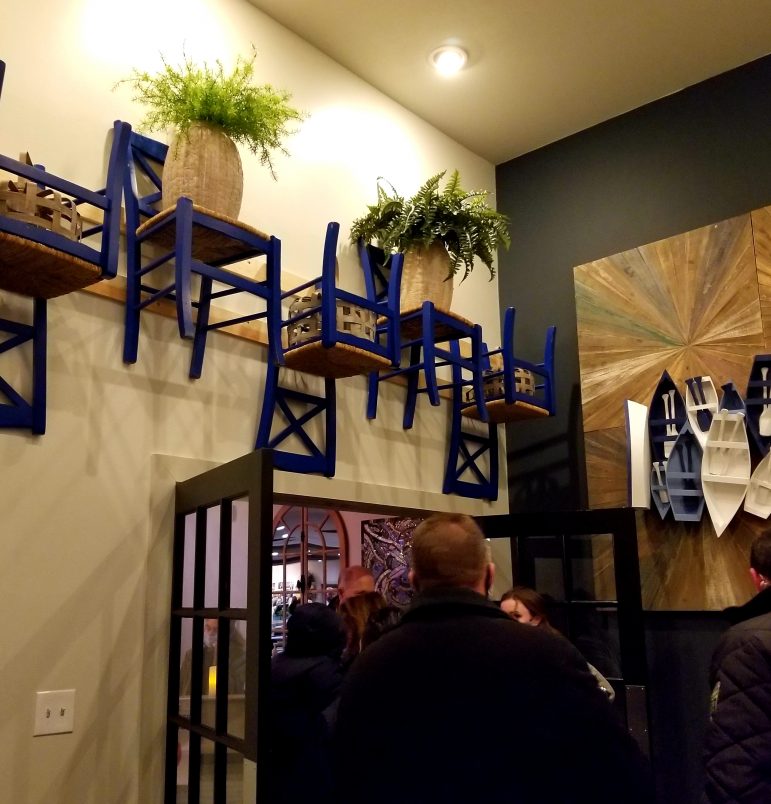