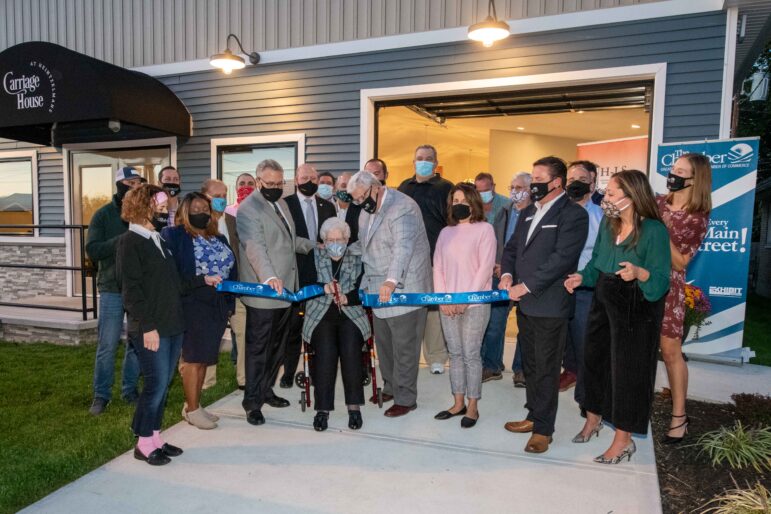 Mayor David Heintzelman is joined by family members, including his 88-year-old mother, for the ribbon-cutting at his new event center, The Carriage House at Heintzelman’s. Also joining him were Hellertown-Lower Saucon Chamber of Commerce board members. Face masks were worn for much of the event because of the coronavirus pandemic that requires their use.

It’s not every day that a local business hosts a ribbon-cutting, but simultaneous ribbon-cuttings at two new businesses are really rare. Add to that the fact that the owner of the businesses happens to be the mayor of Hellertown, and you have a truly special event.

The uniqueness of the celebration was apparent to the dozens of family members, friends and local businesspeople who attended Wednesday’s twin ribbon-cuttings held with the Hellertown-Lower Saucon Chamber of Commerce at the two new businesses that are now part of the Heintzelman Funeral Home family of businesses: The Carriage House at Heintzelman’s and Lehigh Valley Animal Crematory Services Inc.

Mayor David Heintzelman was eager to welcome guests to the new facilities, both of which he said previously he spent years planning before ever breaking ground. 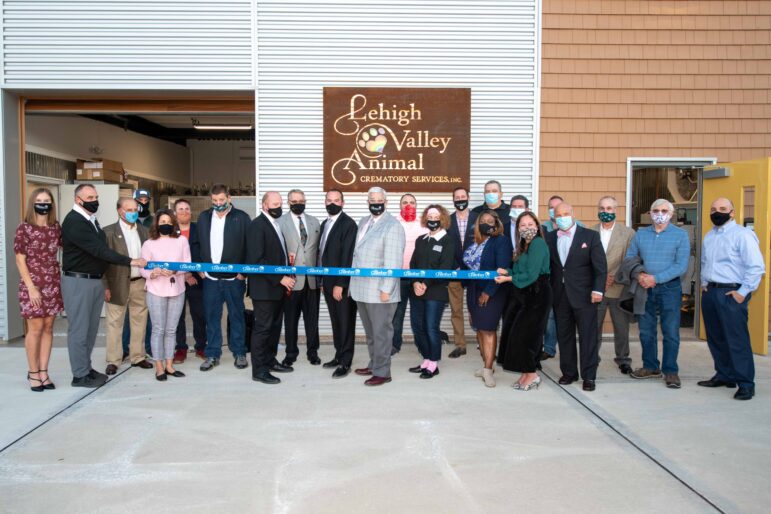 Hellertown mayor and Heintzelman Funeral Home owner David Heintzelman (center) is joined by Greater Lehigh Valley Chamber staff and Hellertown-Lower Saucon Chamber of Commerce board members for the ribbon-cutting at Lehigh Valley Animal Crematory Services Inc. The Front Street business is one of four he now owns within an approximately one-block radius in the borough.

The pet crematory, which is located on Front Street, provides dignified services to individuals and local animal hospitals.

Heintzelman explained that it is being operated by funeral directors Nathan Kamp and Chadd Hamman, who he thanked “for stepping up to the plate for this business to be a success.”

“I have a very soft heart for animals,” he said, which is why he has entrusted the day-to-day operations to his longtime employees.

At the ribbon-cutting for the Carriage House at Heintzelman’s–a modern event center just a stone’s throw from the funeral home–Heintzelman was joined by his family, without whom he said he could never have achieved what he has accomplished.

He noted that his wife and daughters have always been there for him in spite of his “tough schedules.”

“I really am nothing without this community,” he said to the attendees, just before the ribbon was cut. “I love every part of what I do and I could not do it without all of you.” 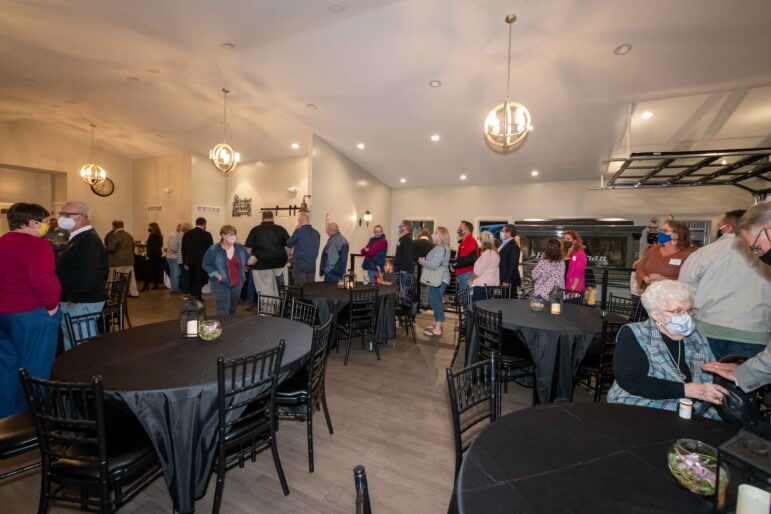 Inside the Carriage House at Heintzelman’s is an airy banquet room with all of the modern amenities one might desire when hosting a bereavement luncheon or other event.

The Carriage House at Heintzelman’s was purpose-built to provide a convenient setting for bereavement gatherings. By law, food may not be served in funeral homes, which is why post-funeral meals are typically held at restaurants or venues that require attendees to drive some distance. The advantage of the new facility is that funeral attendees won’t have to travel off-site to attend a celebration of their loved one’s life after the service.

Hellertown-Lower Saucon Chamber chair Ricky Gower noted that the new building is also available to rent for other functions, with several preferred caterers available to use, and said a recent birthday he celebrated there was “first class.” 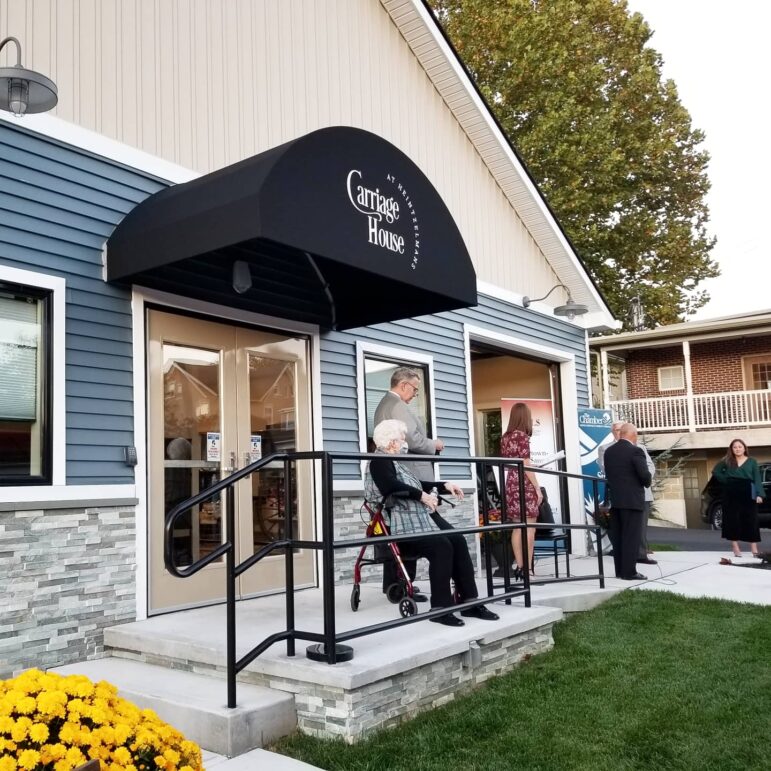 The Carriage House at Heintzelman’s is located on W. Saucon Street in Hellertown, although the front of the building faces the parking lot behind Heintzelman Funeral Home on Main Street.

Heintzelman also thanked the chamber, with whom he has worked closely as mayor to help promote the borough as a great place to do business and have fun.

Ultimately though, “the chamber is not about business. The chamber is about people,” he said. “This project would not have come to fruition if it had not been for the support of the community.”

Food for the ribbon-cutting ceremony was provided by Brooklyn’s Catering of Springtown, beer tastings were served by Lost Tavern Brewing of Hellertown and wine was poured for guests by Black River Farms of Lower Saucon Township.

Heintzelman Funeral Home also donated $5 per guest to the Relay for Life organization, which raises money to aid in the fight against cancer. Additional donations that were pledged on top of the per-guest pledges helped guarantee that the event woudl be a win-win for a deserving local nonprofit. 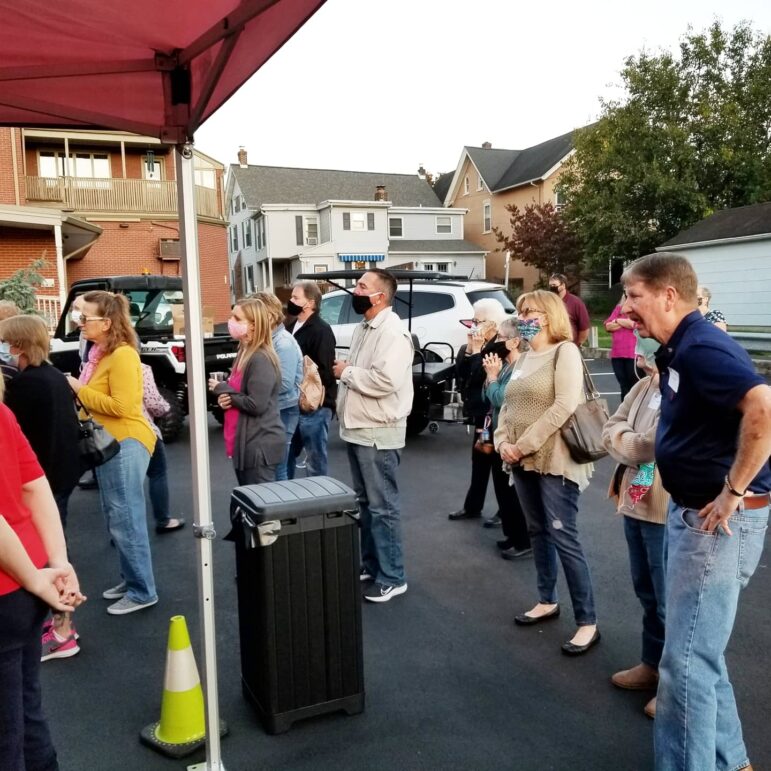 Guests at the ribbon-cutting for the Carriage House at Heintzelman’s listen to the speakers who described Mayor David Heintzelman’s well-known and longstanding commitment to his family, his businesses and his community. 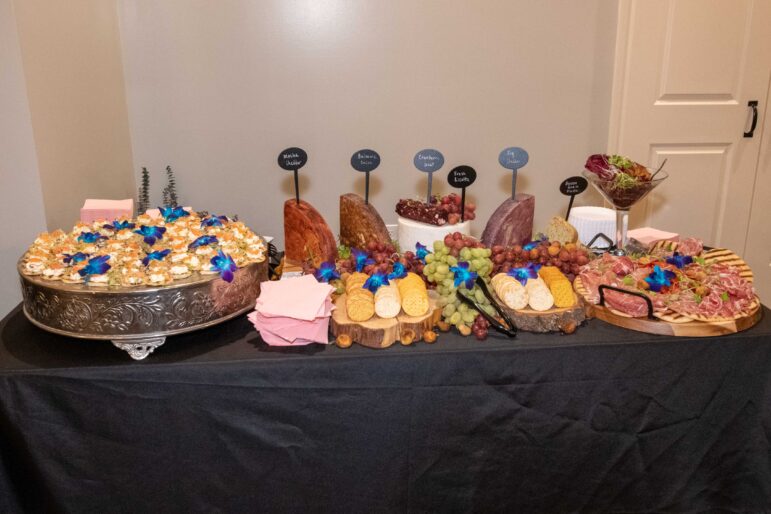 Brooklyn’s Catering owner Bobbie Gianguzzi prepared a sumptuous spread featuring hot and cold hors d’oeuvres for the ribbon-cutting at the Carriage House at Heintzelman’s. Gianguzzi and her Springtown-based catering business have had a long and close association with Mayor David Heintzelman. With a business partner she also owns the Springtown Inn. 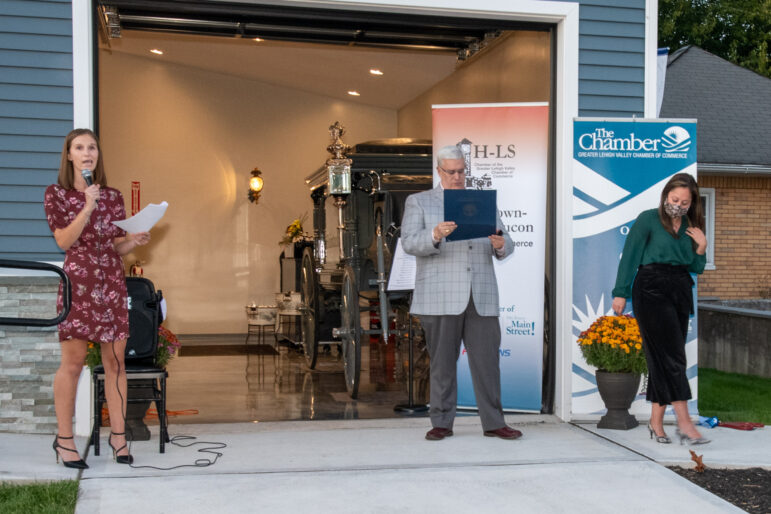 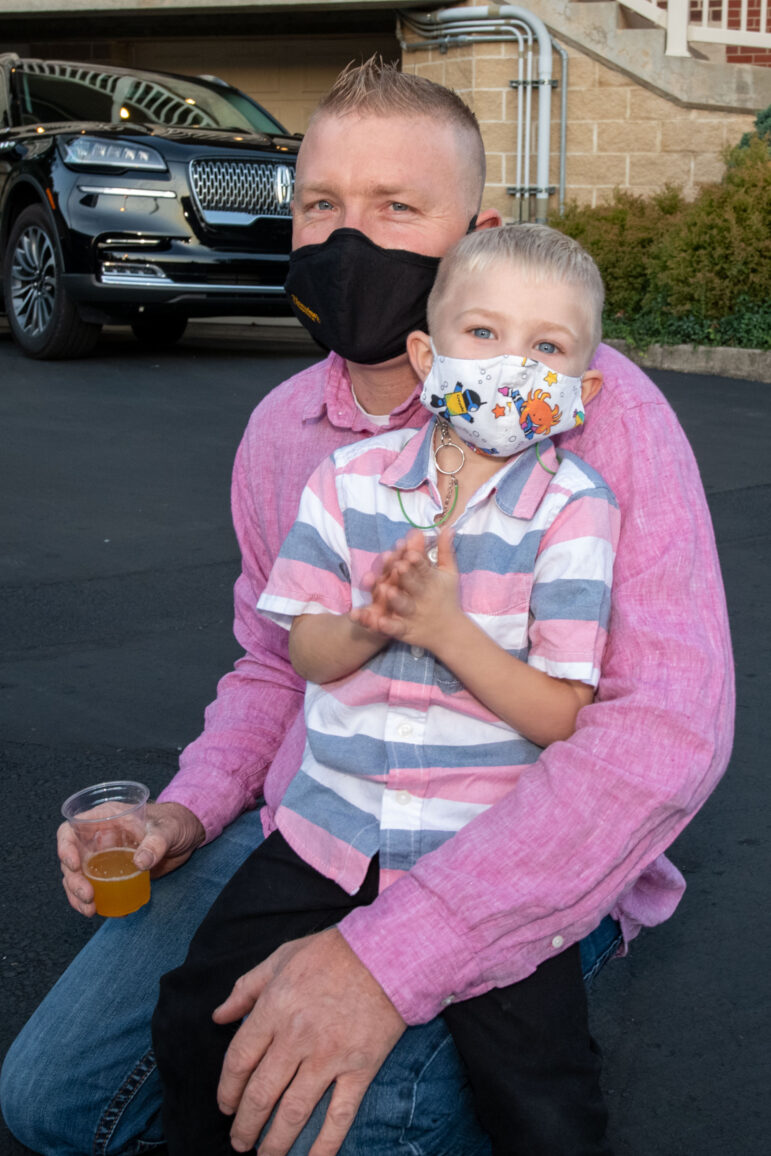 Guests were treated to tastings of Lost Tavern beers at the event, at which face masks were worn due to the coronavirus pandemic. 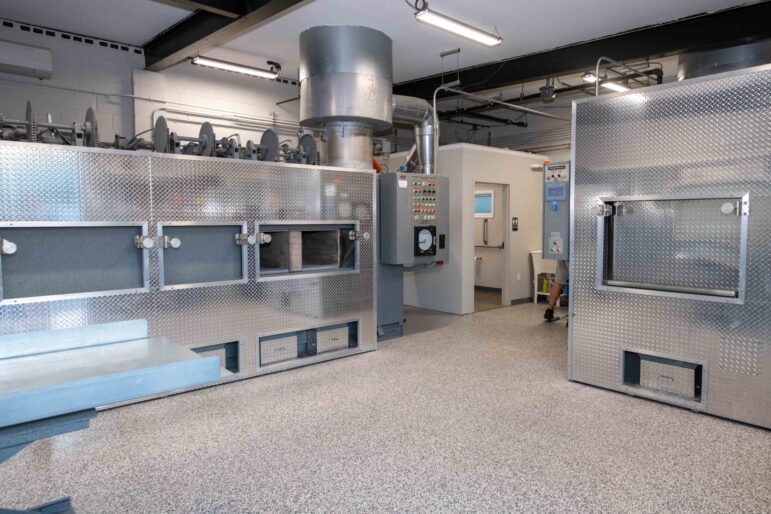 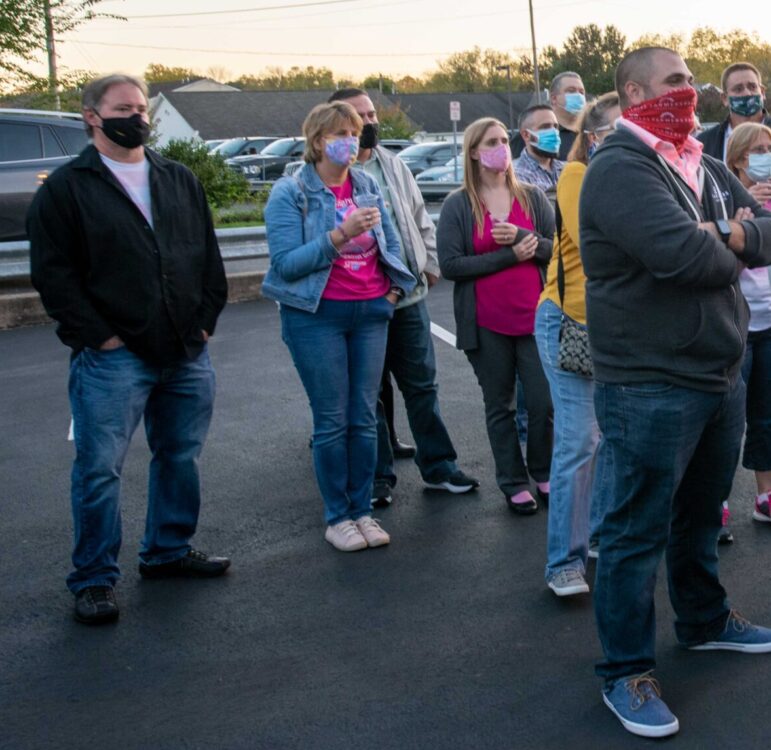 Guests wear face masks as they attend the ribbon-cutting ceremony at Lehigh Valley Animal Crematory Services Inc. in Hellertown Wednesday. Mayor David Heintzelman called COVID-19 “no joke” and noted that the disease has also inflicted pain on many business owners in the Saucon Valley community. “We are stronger together than alone,” he said. 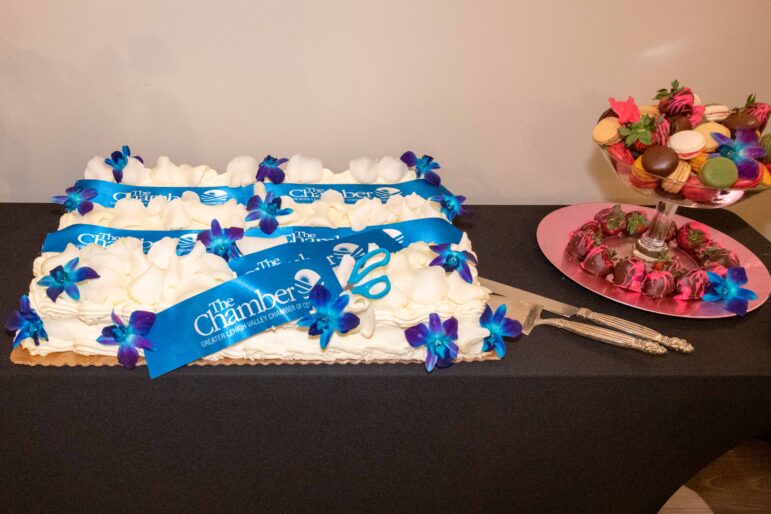 A stunning cake for the occasion was displayed on a table inside the Carriage House at Heintzelman’s. When cut it was revealed to be one of Chef Bobbie Gianguzzi’s famous strawberry shortcakes, much to the delight of sweet-toothed attendees. Gianguzzi is the owner of Brooklyn’s Catering, which catered the event.