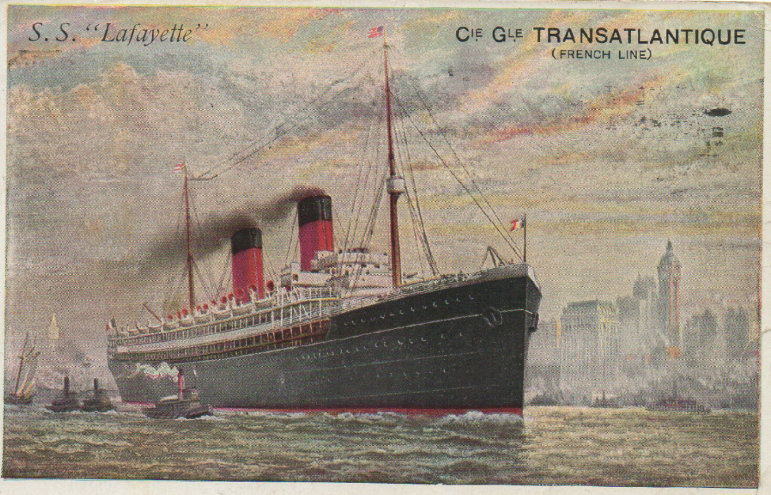 Marion Birkenstock of Hellertown returned from Europe on the steamship Lafayette (pictured in a 1916 postcard) in 1920.

Introduction: More than a year after the Armistice signed on Nov. 11, 1918 brought an end to World War I, Hellertown welcomed back the only woman from the borough who answered the call to serve her country during that conflict. Marion Birkenstock, who was by then 41, returned home in early 1920, apparently somewhat worse for the wear her service had inflicted on her. According to an article published by The Morning Call on Jan. 26, 1920 (below), Birkenstock had nearly died from influenza during the worldwide Spanish flu pandemic that killed millions between 1918 and 1919. Her work for the American Red Cross continued after the war ended and took her to places few other Hellertonians had likely ever visited, where she was recognized for her service, the story notes. Marion Birkenstock, whose last name may have been spelled Berkenstock, apparently later married a man named Attilio Augustus Zayotti. He died in 1939, according to an entry on FindAGrave.com, and she died nearly 30 years later, on March 29, 1968, at the age of 89. Marion B. Zayotti is buried in Hellertown’s Union Cemetery, according to FindAGrave.

After a service of a year and a half with the American Red Cross in the war-ridden Balkan states as well as France, Miss Marion Birkenstock, daughter of Mrs. John Laubach, Hellertown’s only woman who went to Europe during the war, is finding life there with the pleasant environments a pleasing contrast to the lands of pestilence and famine from whence she came.

Miss Birkenstock arrived in New York aboard the steamship Lafayette after an absence from these shores since July 1, 1918, when she left for France. She was met at the boat by her mother and Miles Ruch, of Hellertown, and Mrs. Howard Hess and son, Howard, of Philadelphia. Together they drove by automobile to Hellertown.

Since her return Miss Birkenstock, who shows to some extent the terrible strain that she went through, has been the centre of interest. There is hardly a day that she is not receiving friends, or calling upon others, renewing old acquaintances, etc. On Sunday two of her friends from Philadelphia were her guests.

On July 1, when the war had reached unexcelled destructiveness Miss Birkenstock left America with a contingent of Red Cross workers for France. She had given up a fine position with the Baldwin Locomotive Works at Philadelphia to answer the call. Arriving at Paris she became attached to the Red Cross headquarters, being an expert stenographer, and was so engaged when she became a victim of the flu. For weeks she hovered between life and death.

Following the signing of the armistice she was assigned to the Red Cross Commission designated for work in the Balkan states, becoming the stenographer for the general staff. The commission eventually made its headquarters in Bucharest, capital of Roumania. This country had been overrun and devastated by invading Huns armies and disease, poverty and lawlessness are rampant among the inhabitants. While in Bucharest Miss Birkenstock was decorated by Queen Marie, of that country, being one of the two members of the Red Cross party so honored. Miss Birkenstock also wears two other decorations earned during the war.

Doubtless no resident of Hellertown, not even the soldiers, have had such a wide traveling experience as Miss Birkenstock. There is hardly a city in France, England and the Balkan states that she has not visited while in the performance of her duty. She also visited many battlefields and brought home with her valuable souvenirs. For instance, in her collection is a piece of the Big Bertha that wrought such havoc in Paris on Easter Day, 1918. She also has two French “75” shells and various other articles that have a direct connection with some of the most important events of the world war.

Her strenuous life has left Miss Birkenstock in a very weakened condition from which she is recuperating.

About this column: Olden Days is a Saucon Source series in which newspaper articles in the public domain are used to recall area news from the late 1800s and early 1900s. Love local history? Subscribe to our newsletter and sign up to become a member today!