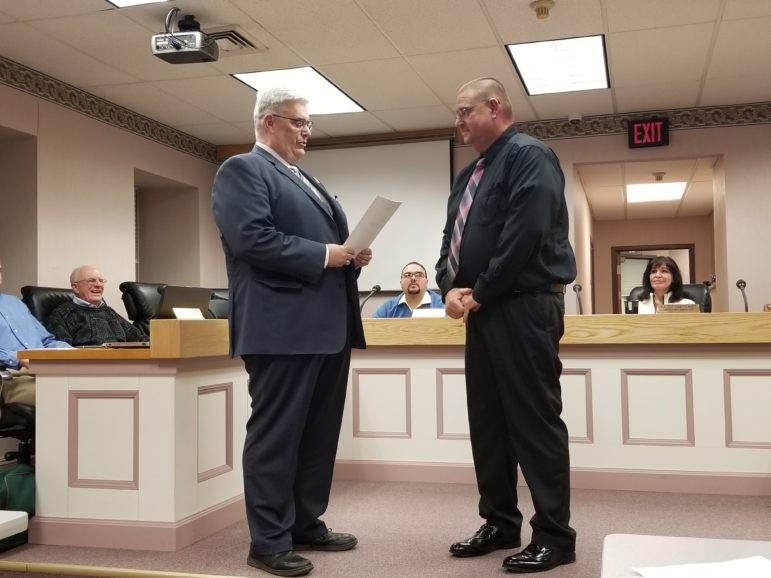 Above, Hellertown mayor David Heintzelman swears in borough councilman Phil Weber in January 2020. Weber, a longtime member of Hellertown Borough Council, was last re-elected in November 2019. Following his resignation Tuesday due to health concerns, council must appoint someone to fill Weber’s seat until the end of the year. (FILE PHOTO)

A well-known public servant in Hellertown has resigned his seats on both borough council and the borough’s planning commission.

The news that councilman Philip “Phil” Weber was stepping down due to ongoing health concerns was delivered at Tuesday’s borough council meeting by president Tom Rieger, whose voice became slightly choked as he read a statement about his friend and colleague.

A borough native, Weber, 59, has spent most of the past two decades on council, on which he has served a numerous four-year terms. Initially elected as a Republican, Weber later switched parties and continued his service to the borough as a Democrat. Over the years, he has also devoted himself to the service of his fellow Hellertonians as a youth athletics coach, a Scout leader and a Dewey Fire Company No. 1 volunteer firefighter.

“I (first) ran for a seat on Borough Council so I could help my children grow up in a safe, happy and welcoming community, as I was fortunate to have done,” Weber told Saucon Source in 2019. “As a lifelong resident of Hellertown, I continue on council to see that all of the residents including my own grandchildren will have the experience I did.”

In 2013, while he was serving as council president, he lost a primary and a chance at re-election by one vote. However, he recovered from the loss to serve more terms on council.

“Phil Weber has been a vital part of this council,” Hellertown Mayor David Heintzelman remarked at Tuesday’s meeting, noting that he has always attended and even volunteered at important community events like the borough’s popular Music in the Park concerts. “This is a sad day for all of us here in this room, but it’s also a sad day for Hellertown.”

Heintzelman noted that in recent years Weber “has been handed some things.”

Among the personal challenges he has faced have been the death of a son, Shawn Weber, in 2019, and the death of his mother in 2016.

“I want to applaud him, because he actually put the borough first, again,” Heintzelman said. He encouraged those present for the meeting as well as community members to “take some time and think of (Phil) and his family.”

In addition to sharing their sympathies, council is now tasked with filling the vacancies Weber’s dual resignations have created.

Council approved a motion at the meeting to authorize borough staff to publicize the vacancies and to seek letters of interest from residents who wish to fill them.

The borough council vacancy will be for a term of approximately five months, since Weber was less than halfway through the four-year term to which he was elected in 2019.

Rieger noted that borough residency is required of applicants for the seat, who must be at least 18 years of age and registered to vote, however party affiliation does not matter.

Applicants should be available to attend the Monday, Aug. 2 borough council meeting, when council is expected to make its decision about who will serve out the remainder of the first half of Weber’s term. With six council members set to vote on the matter, Rieger noted that former Hellertown mayor Richard Fluck could cast the deciding vote if there is a tie, since he is the chairman of the borough’s vacancy board.

Weber’s resignation also comes during an election year in which there will be a competitive race in the fall for four council seats. Six candidates–including four Democrats and two Republicans–will be on the November ballot to vie for them.