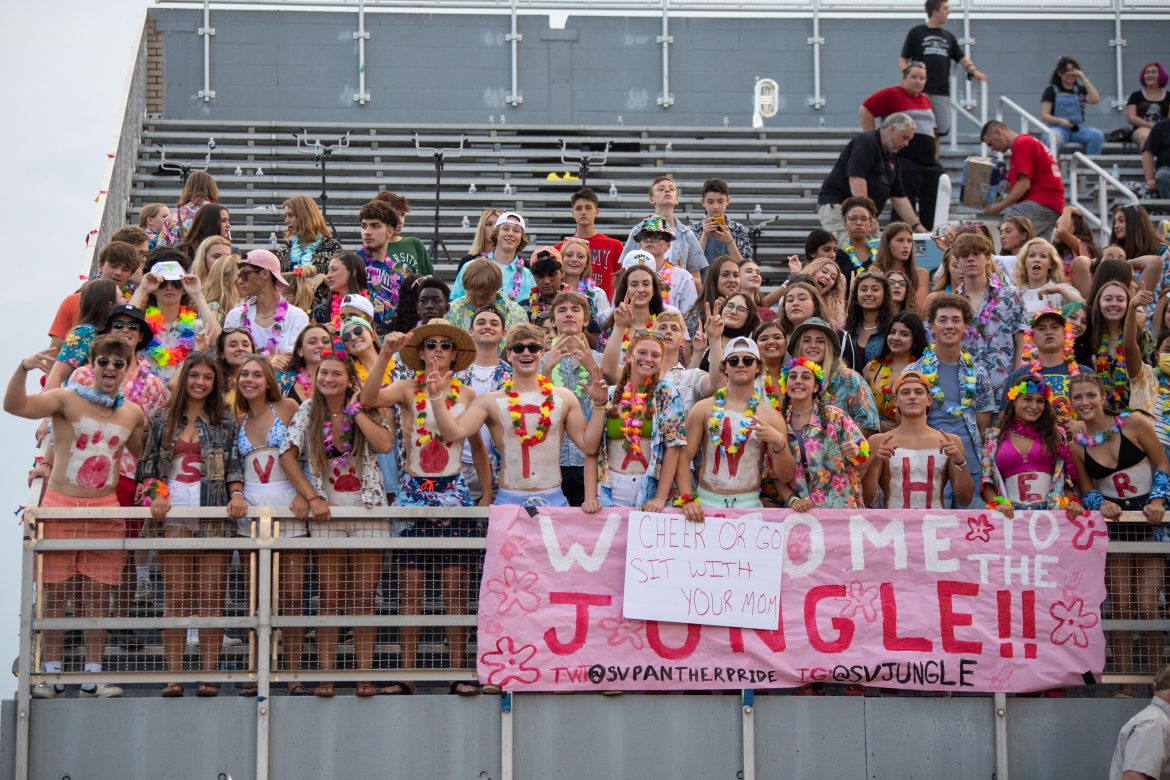 The Jungle is back! Following the COVID filled restrictions of 2020, the 2021 PIAA football season is under way.

Finally, the 2021 PIAA high school football season has arrived.  Sure, COVID is still harassing our society, but a new normal seems to be under way.  Even though a few games were cancelled this opening weekend, the Saucon Valley Panthers were fortunate enough to buckle-up and play on Friday.  In a much anticipated opening night in Hellertown, the Saucon Valley Panthers squared off against the Notre Dame Crusaders. 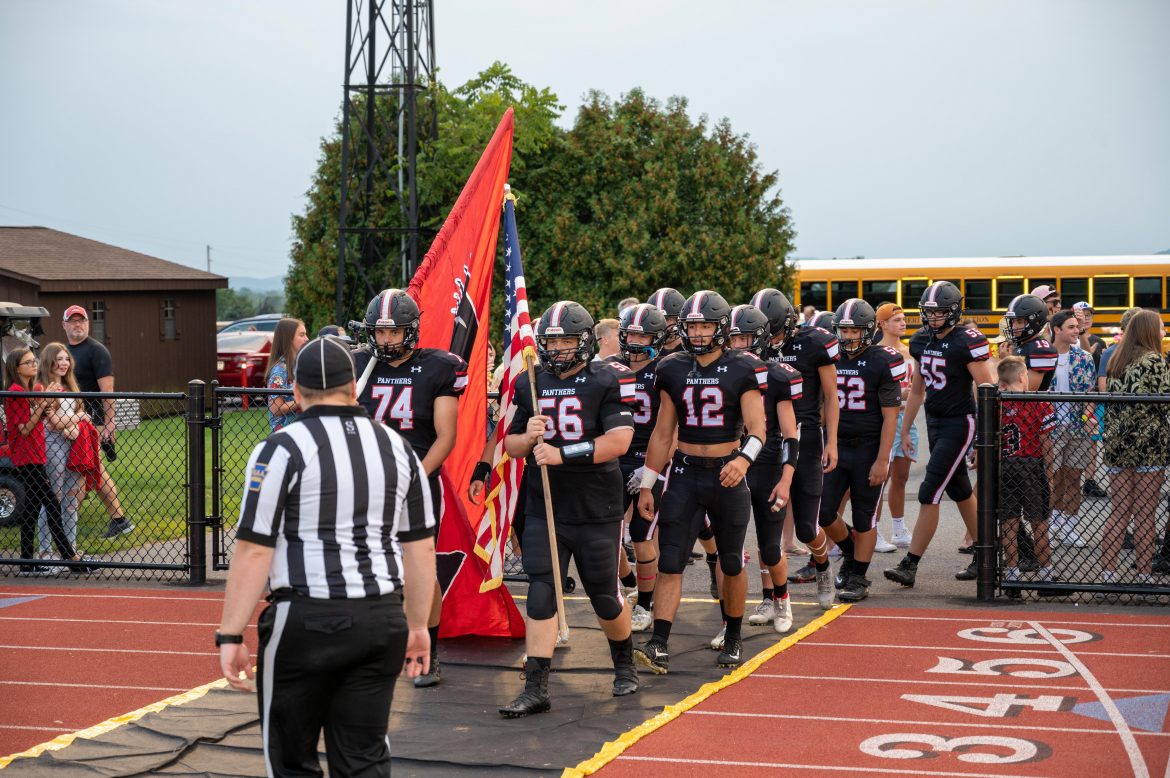 The Panthers take the field in their 2021 season opener against the Notre Dame Crusaders.

Notre Dame wasted little time getting their offense revved up.  Led by senior quarterback Colin Quintano, the Crusaders embarked on an 8-play, 69-yard march for a score.  Quintano completed four consecutive passes and added a couple of runs for 47 yards.  His second run was a well executed zone-read good for 22-yards and a touchdown.  Three minutes into the game, Notre Dame jumped out to a 7-0 lead.

Saucon, looking to answer, powered and finessed their way down to the Crusader 28-yardline.  However, Panther quarterback Dante Mahaffey who was scrambling away from an intense Crusader pass rush coughed up an interception to end the drive. 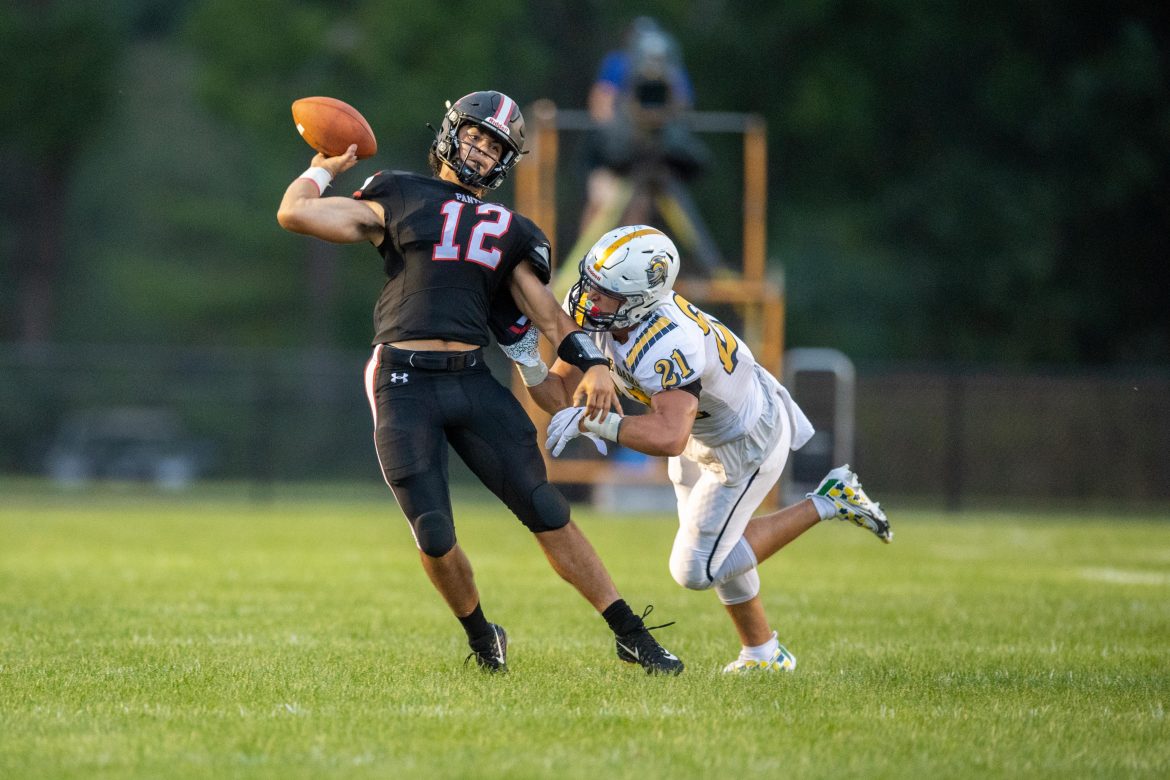 After an exchange of punts, the Crusaders were again on a quick prowl for points.  In only four plays Notre Dame covered 52-yards for a score.  Quintano completed a pass to Logan Castellano for a 22-yard scoring strike. At the close of the opening quarter,  Notre Dame extended their lead, 14-0. 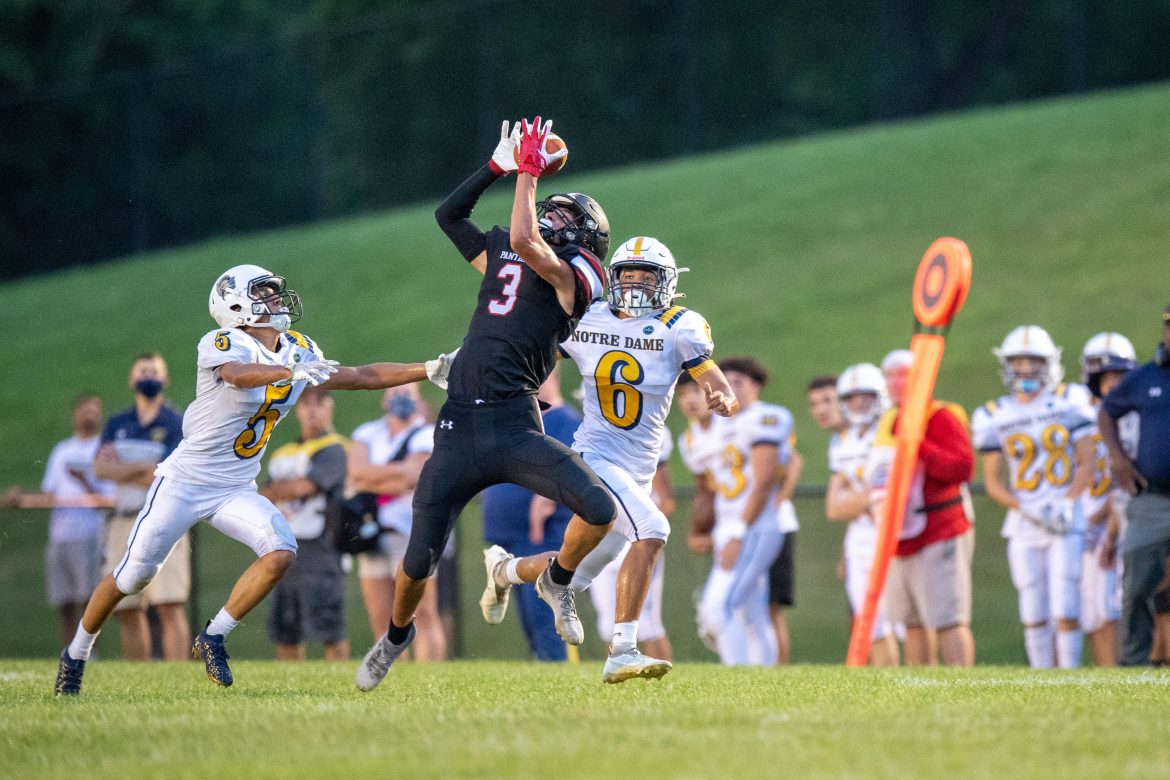 Alex Magnotta making a play for the Saucon Valley Panthers.

The Panthers fought back.  Saucon put together a nice mix of pass and run and were on the move.  Mahaffey threw to classmate Ty Csencsits and junior Alex Magnotta for a couple of nice completions.   Senior running back Damian Garcia gashed the Crusaders with a couple of chunk runs.  Garcia found daylight into the endzone for a 6-yard scoring run that cut the Crusader lead to 14-7. 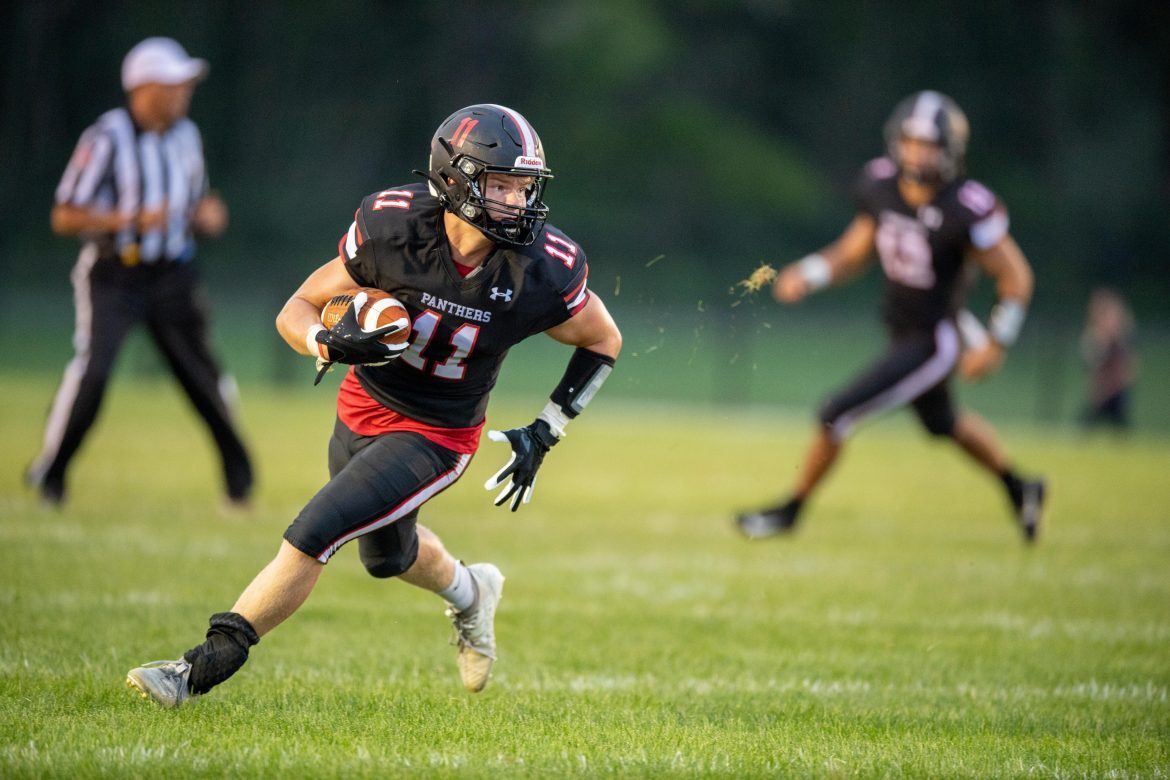 Saucon senior receiver Ty Csencsits picking up a first down for the Panthers.

Notre Dame punched right back.  Following a kickoff return that cut the field in half, Quintano hit receiver Tarif Muhammad in the flat who sped untouched for a 55-yard touchdown.  Muhammad’s “bubble” screen-pass gave the Crusaders a 21-7 advantage with about nine minutes left to play until halftime. 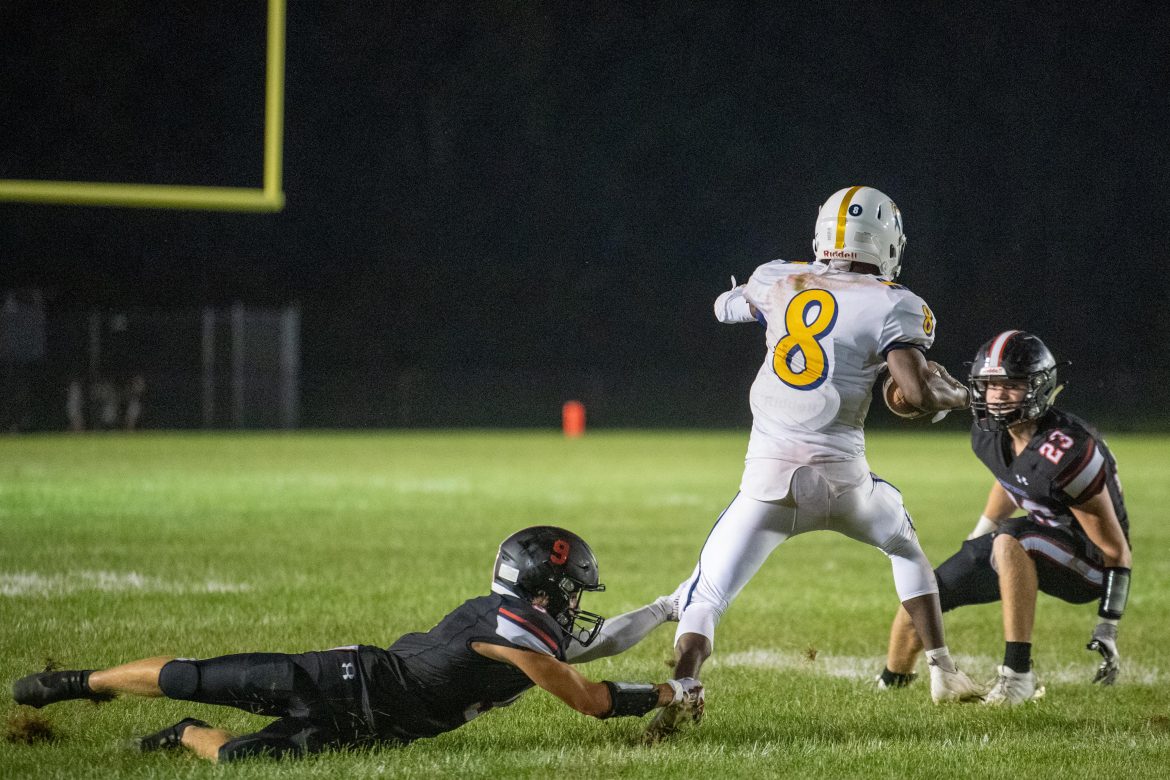 Saucon Valley was hit hard, but kept fighting.  Mahaffey and company came right back and let the Crusaders know they were still in a game. On the Panthers very next possession Mahaffey dropped back to throw but was pressured.  Mahafffey stepped up, split the pass rush and darted toward the Panthers sideline.  After powering through a couple of would-be tacklers, he raced for an 80-yard touchdown run.  Midway through the second quarter, the Panthers trailed 21-14. 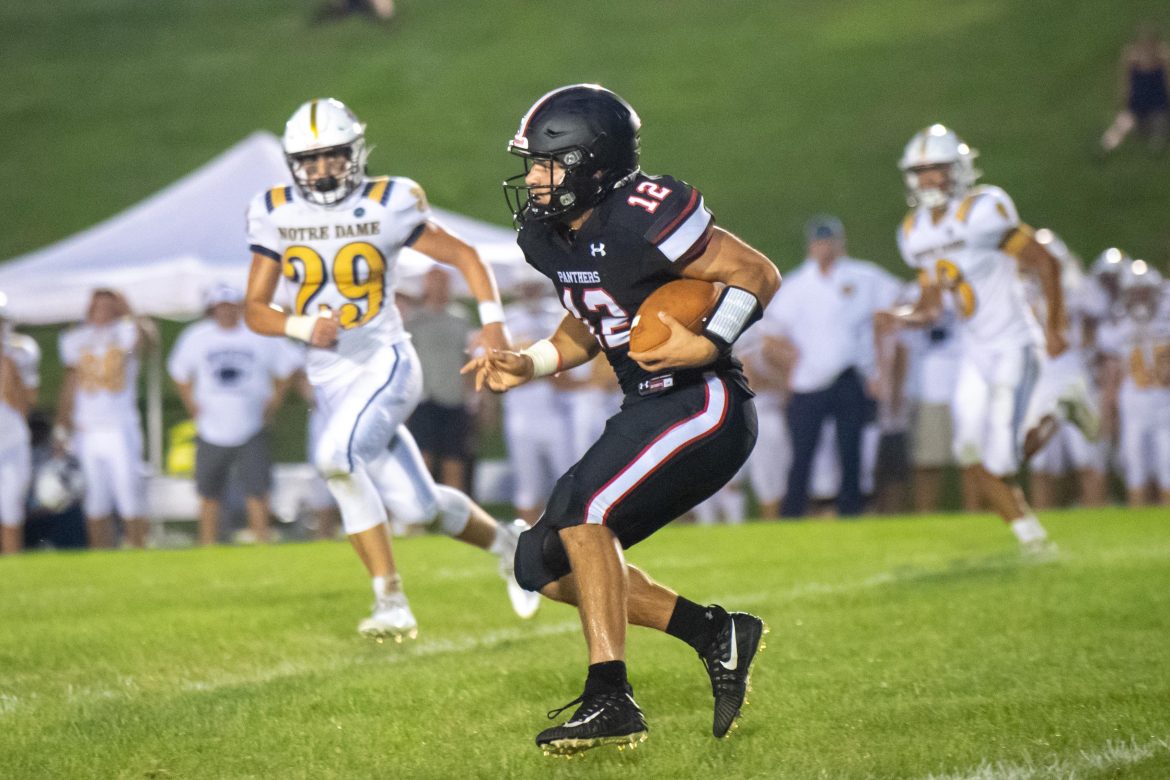 Saucon Valley’s “Dual-Threat Dante” helped the Panther cause with an 8-yard touchdown run.

Following another sizable kickoff return, Saucon Valley’s defense stiffened on the next Crusader possession to force a 3-and-out punt.  The Panthers regained possession from their own 6-yardline.  However, Notre Dame kept the pressure on Mahaffey.  On first down Mahaffey dropped back to pass from his own endzone and was immediately pressured.  The Panther QB tried to make a play, but his incomplete pass was ruled “intentional grounding” to avoid a sack.  Consequently, Notre Dame was awarded a 2-point “Safety” that made the score 23-14.

In addition, to giving up the two points, the Panthers were required to kick away to the Crusaders from their own 20-yardline.  It was a bomb of a kick by Alex Magnotta, but Notre Dame returned the ball to the Panther 48-yardline.  After throwing an incomplete pass on first-down, Quintano threw back to back 24-yard completions.  The second completion found Muhammad racing down the seam for his second TD score.  Quintano’s throw and Muhammad’s catch gave the Crusaders a 30-14 halftime advantage. 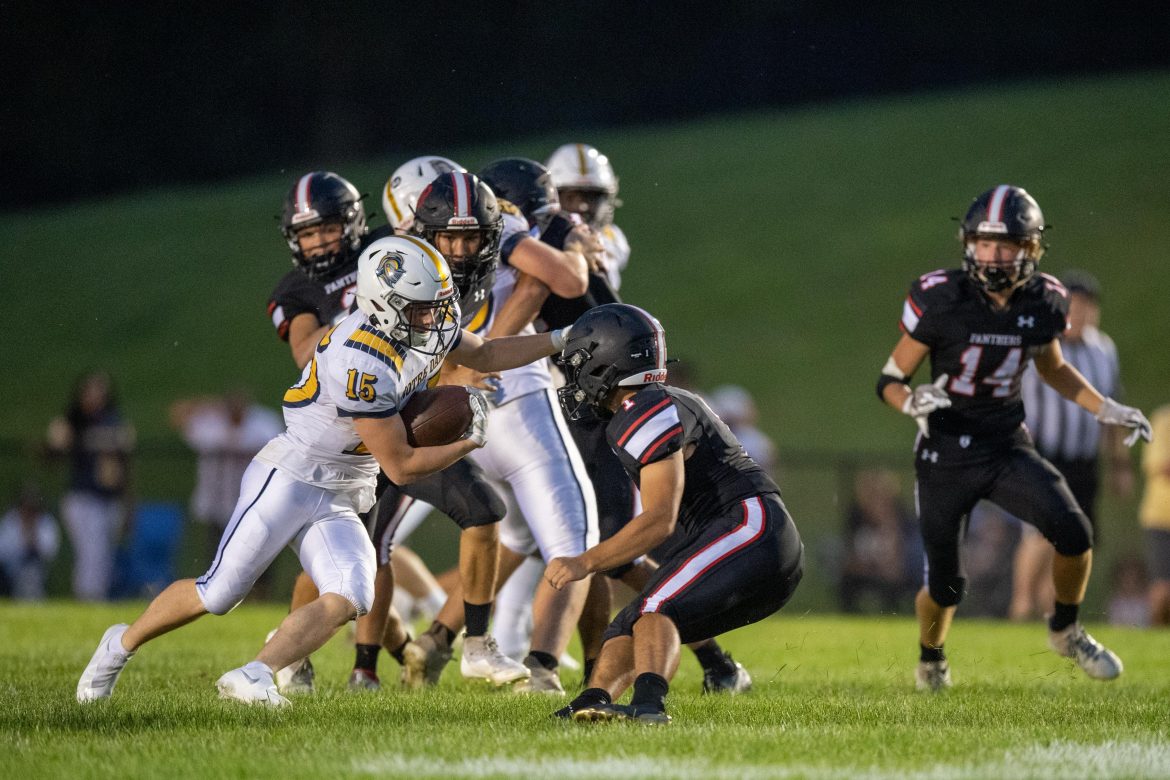 The Notre Dame offense picking up some yards against the Saucon Valley Panthers.

After a prolonged halftime due to a weather delay, Saucon again showed their fight and marched down the field intent on cutting into the Notre Dame lead.  Saucon’s score was highlighted by a 19-yard scramble by Mahaffey and a pass interference call on a Mahaffey pass to senior Anthony Orlemann.  The actual touchdown was courtesy of Damian Garcia once again finding daylight behind the left side of the Panther line.  Garcia scampered in from eleven yards out and cut Saucon’s deficit to ten points.  The Panthers opted to go for two on the point-after attempt in order to cut the Crusader lead to one score.  But the try came up empty.  Saucon Valley trailed Notre Dame 30-20.

Notre Dame’s high-octane offense went back to work and manufactured another scoring drive.  This one started from their own 12-yardline and ended with a booming 44-yard field goal by Nick Garrido.  It was a monster kick right down the middle that would have been good from sixty yards out.  Nonetheless, the Crusaders increased their lead to 33-20. 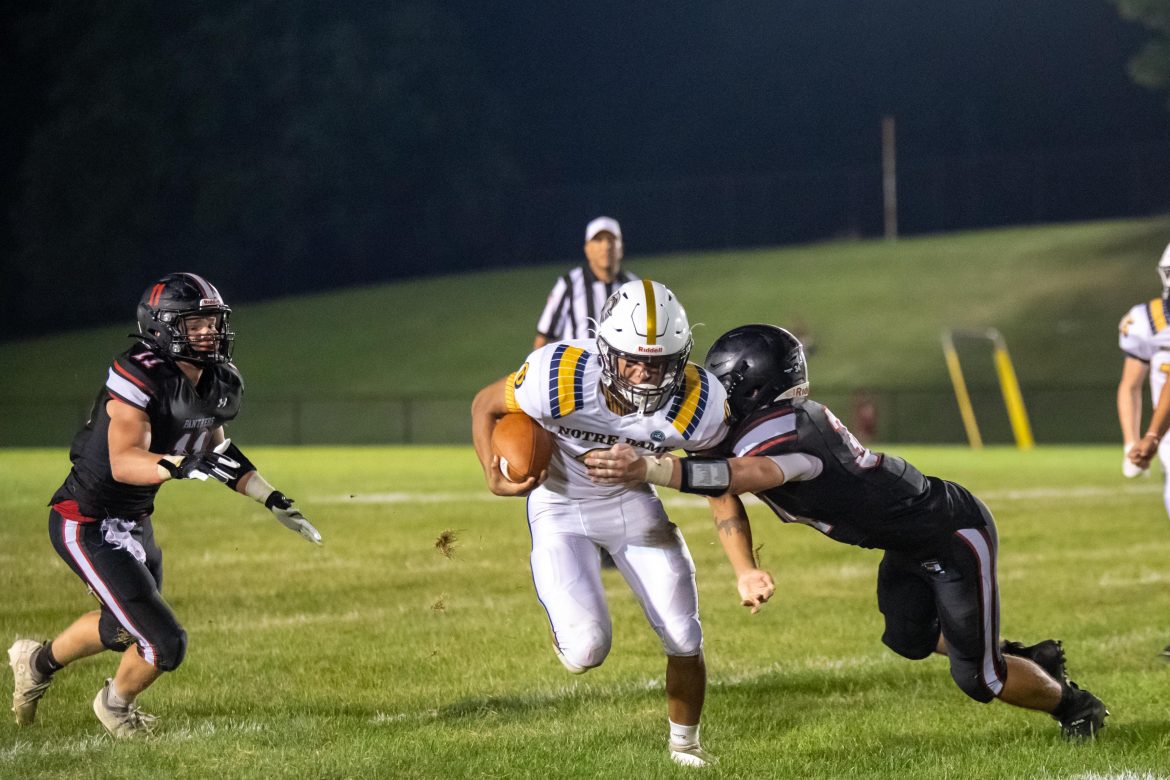 Ty Pfizenmayer and Ty Csencsits trying to wrap up the Notre Dame Crusaders.

Saucon continued to press, but another turnover sank their hopes.  Notre Dame’s opportunistic defense stepped in front of another Mahaffey pass and returned the ball to the Panther 28-yardline.  Three plays later Quintano found Logan Castellano again racing down the seam with a 33-yard touchdown pass. The extra point was good and Notre Dame took a commanding 40-20 fourth quarter lead.  The Crusaders added another late score and then left Hellertown with an impressive 47-20 victory.

UP NEXT:  Saucon Valley (0-1) will host Salisbury (0-1) Friday night.  The Falcons were edged out by Catasauqua 6-0 in their home-opener. 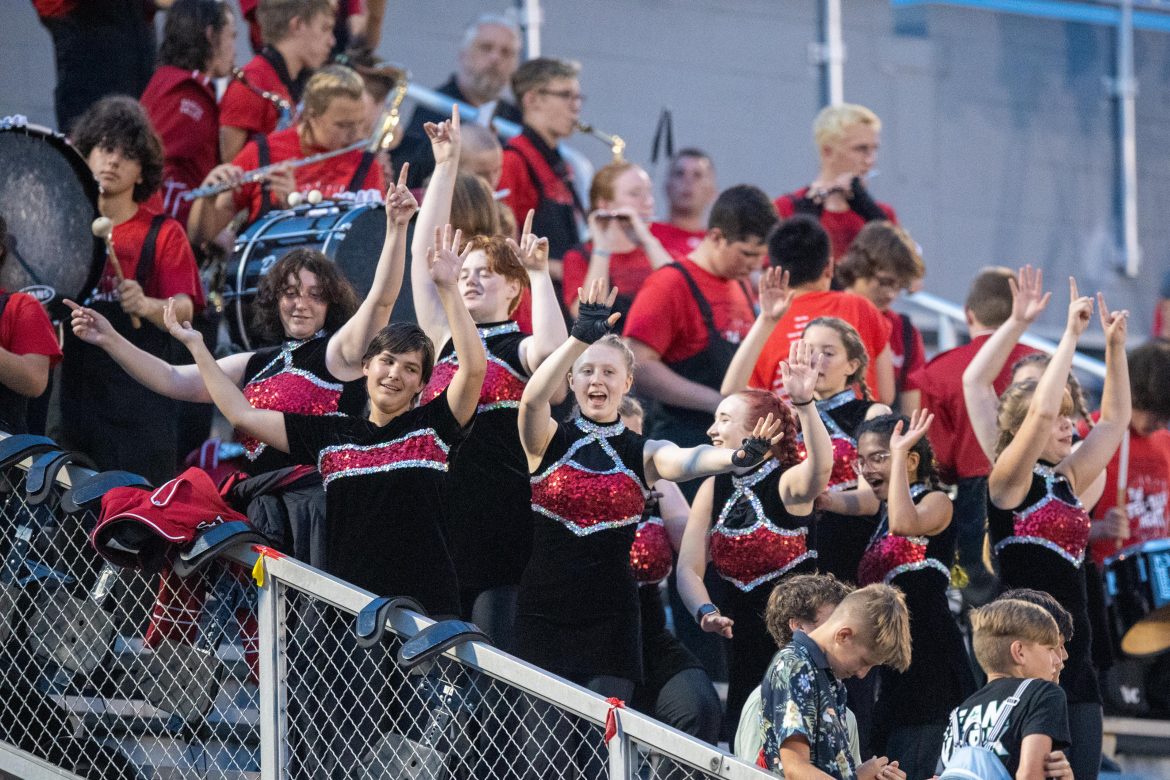 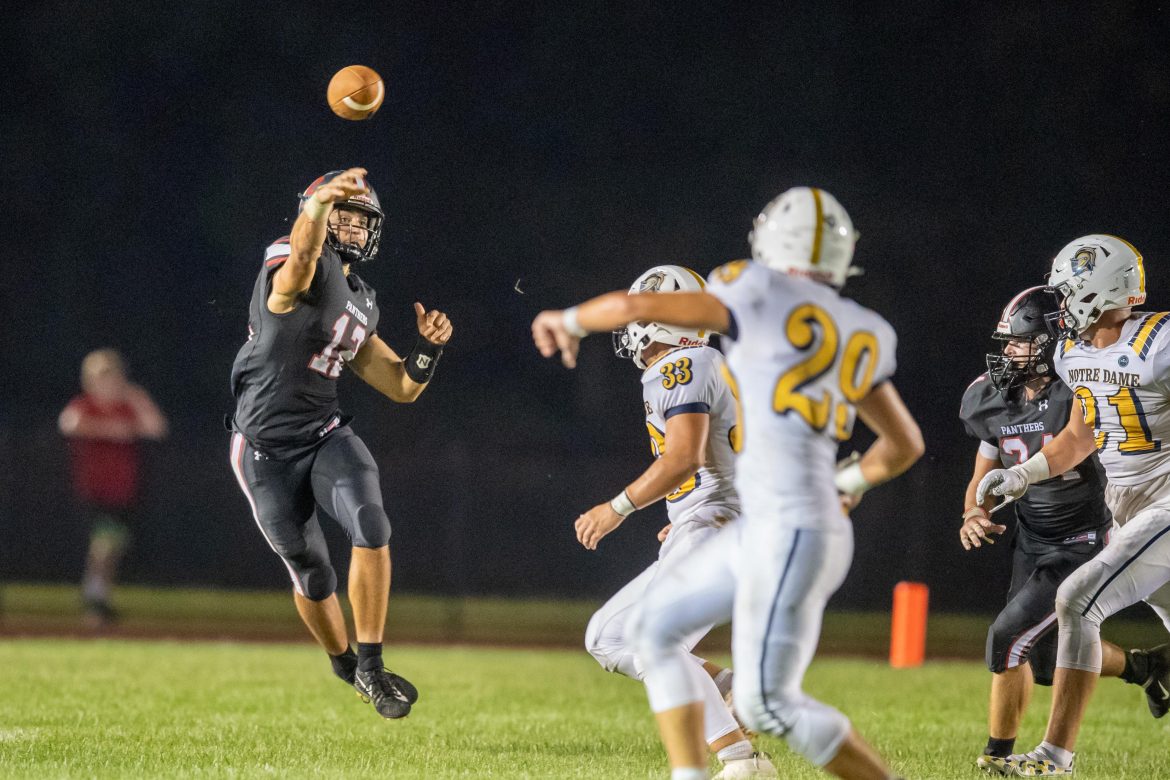 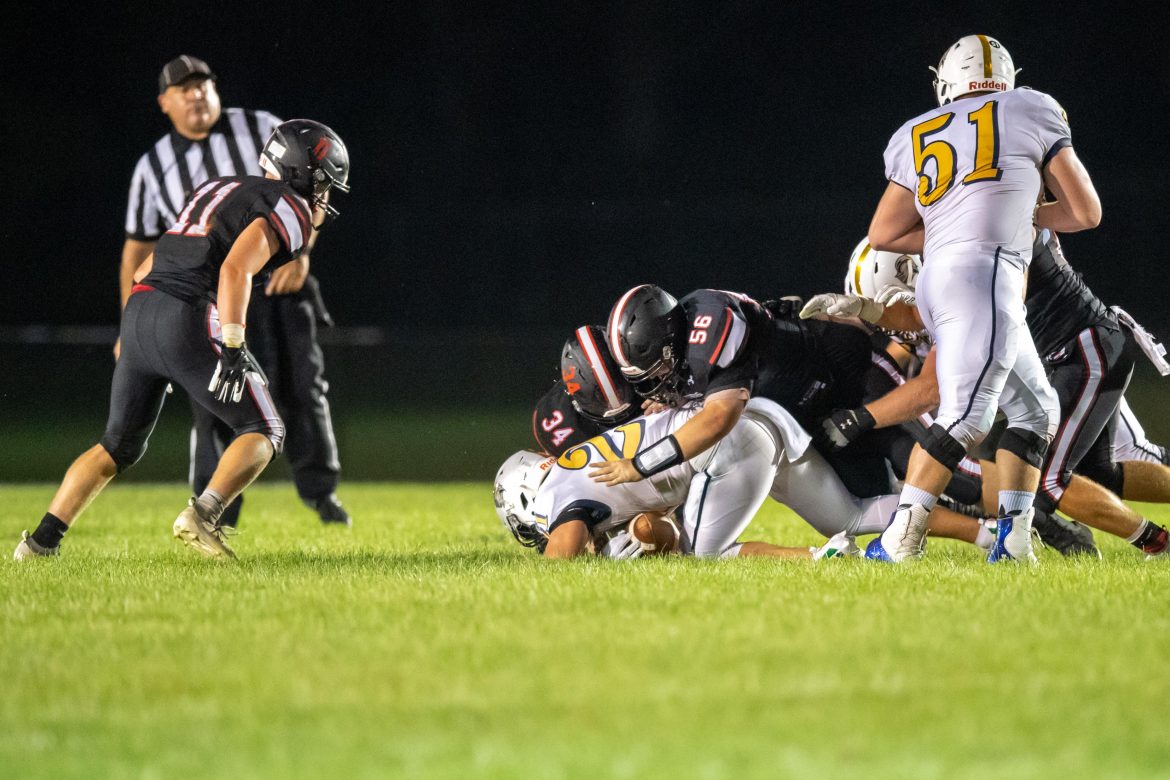 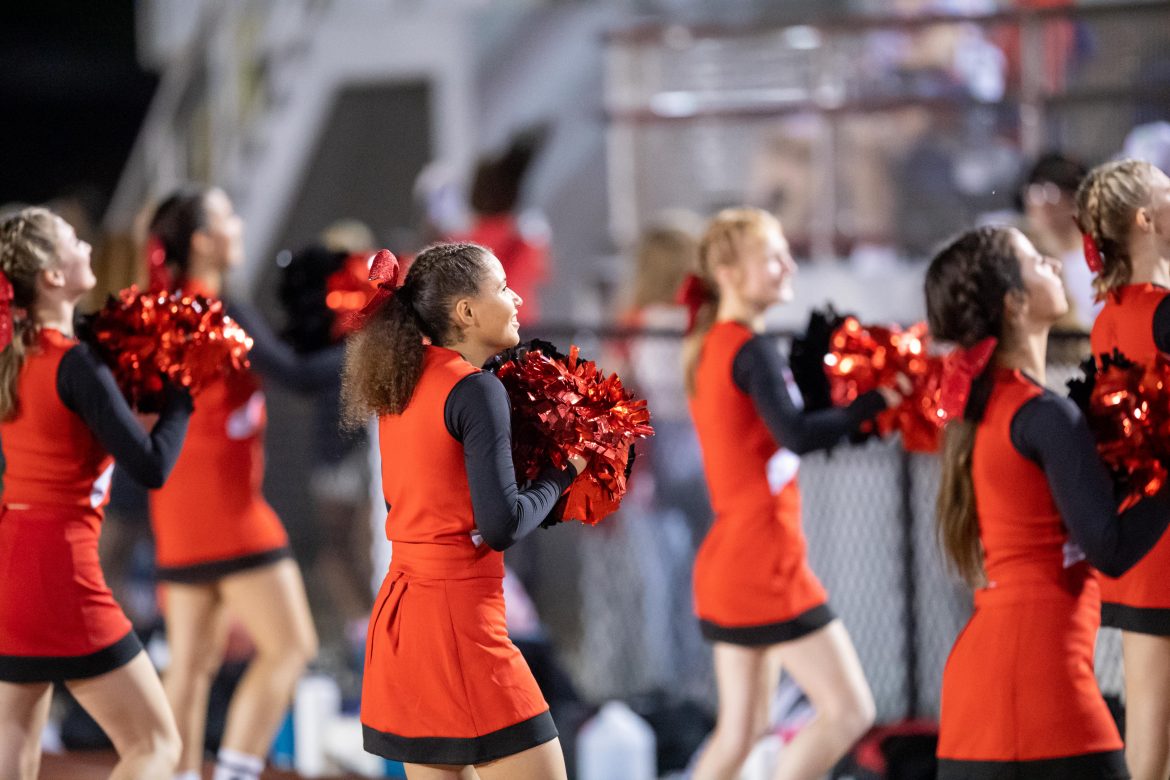 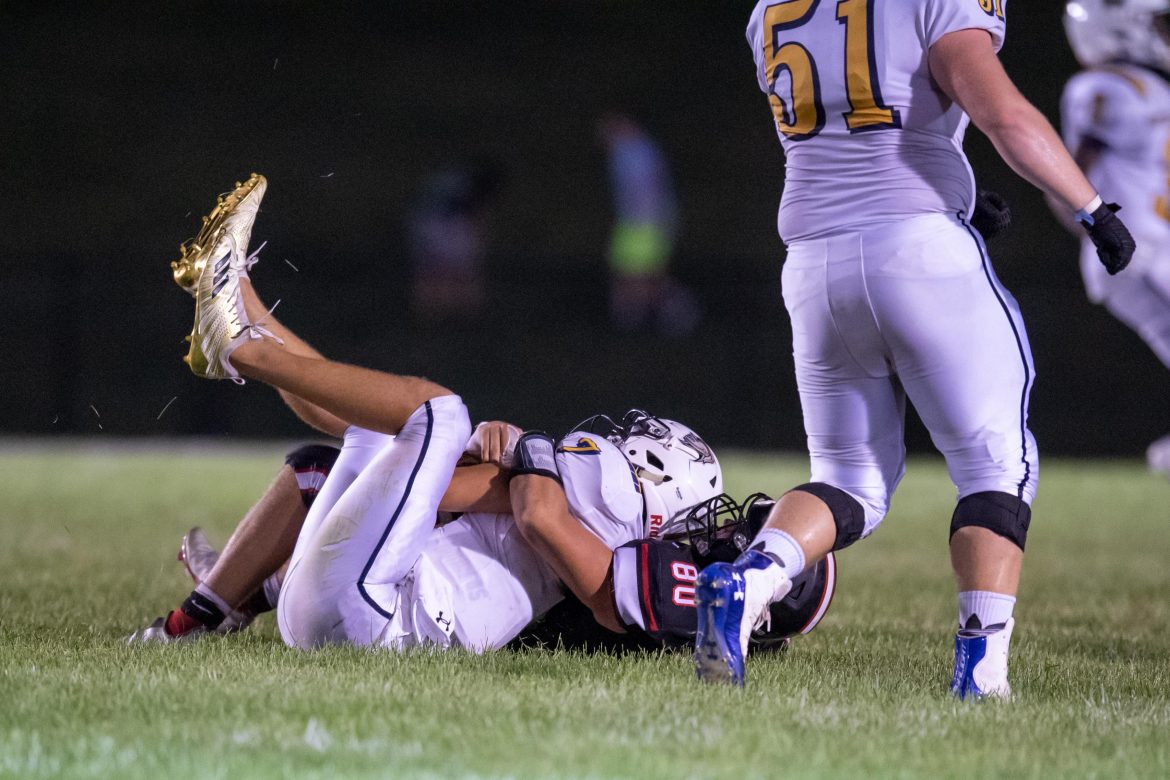 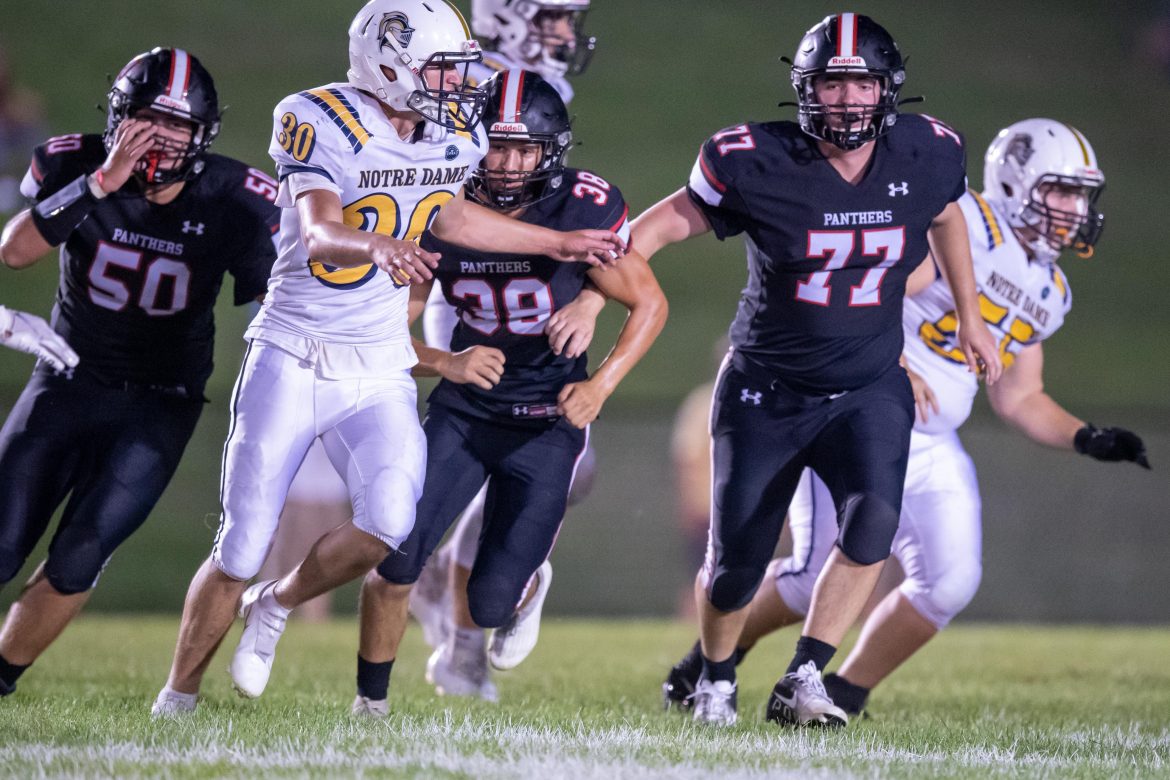 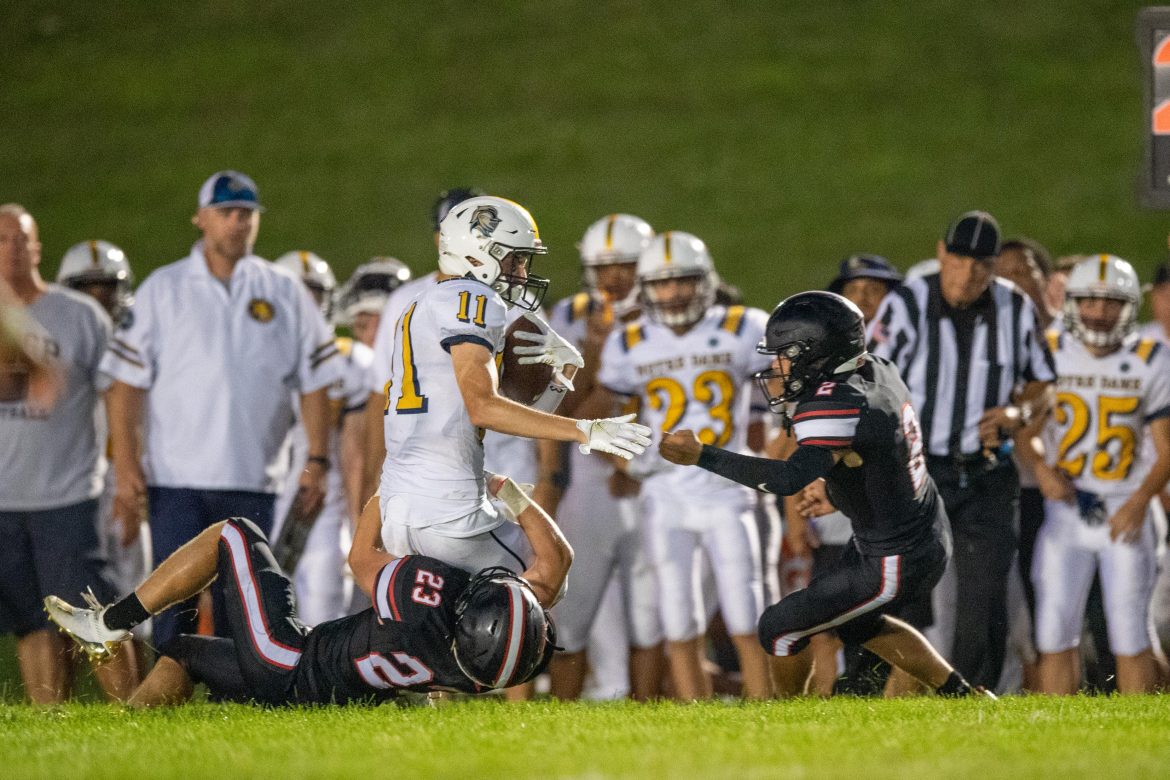 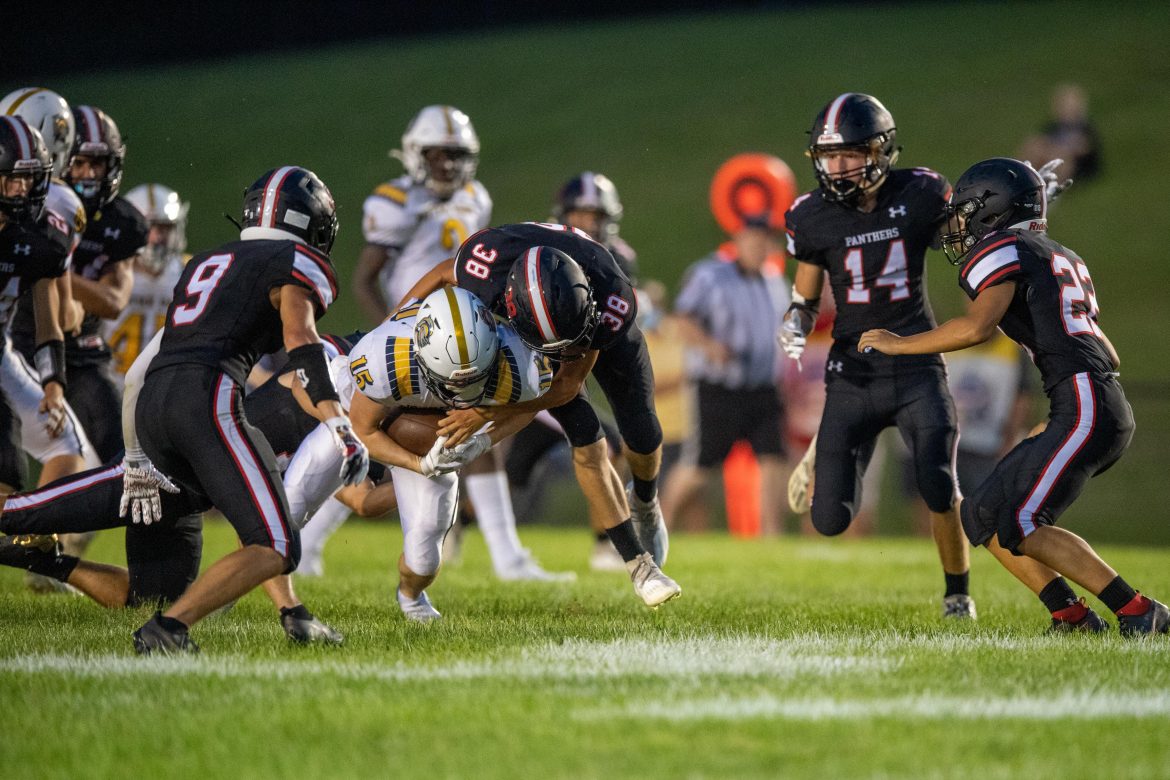 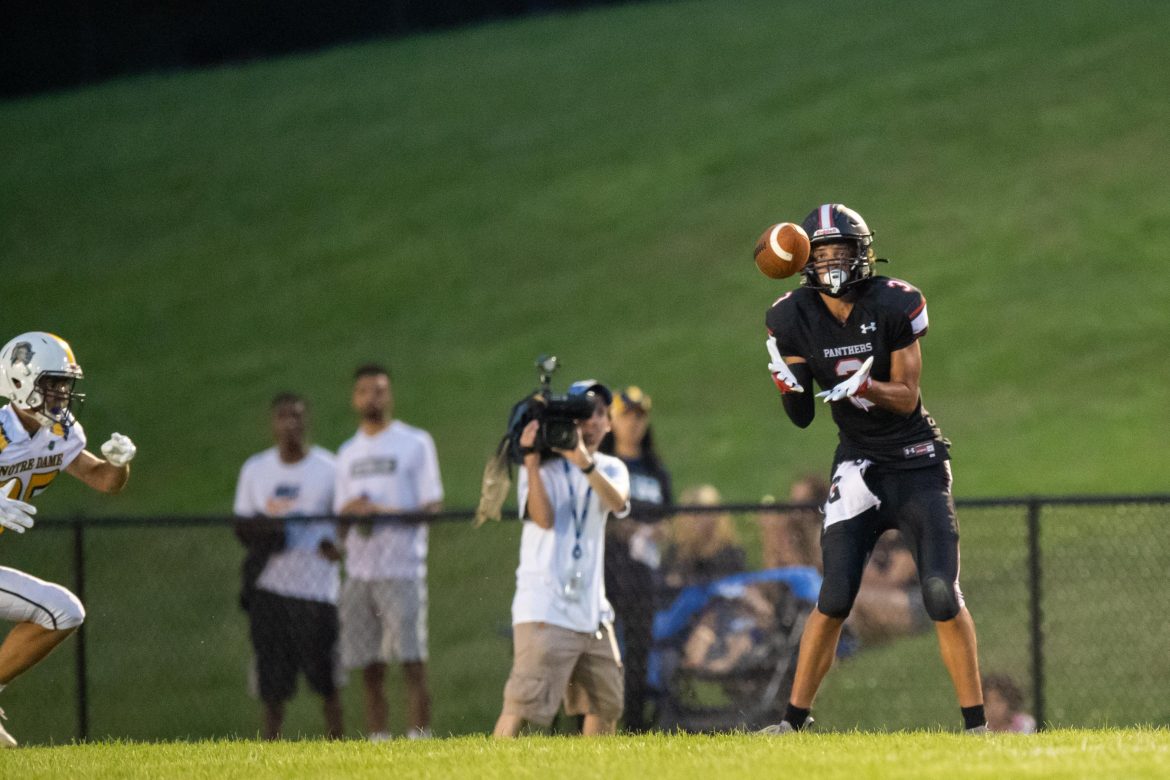 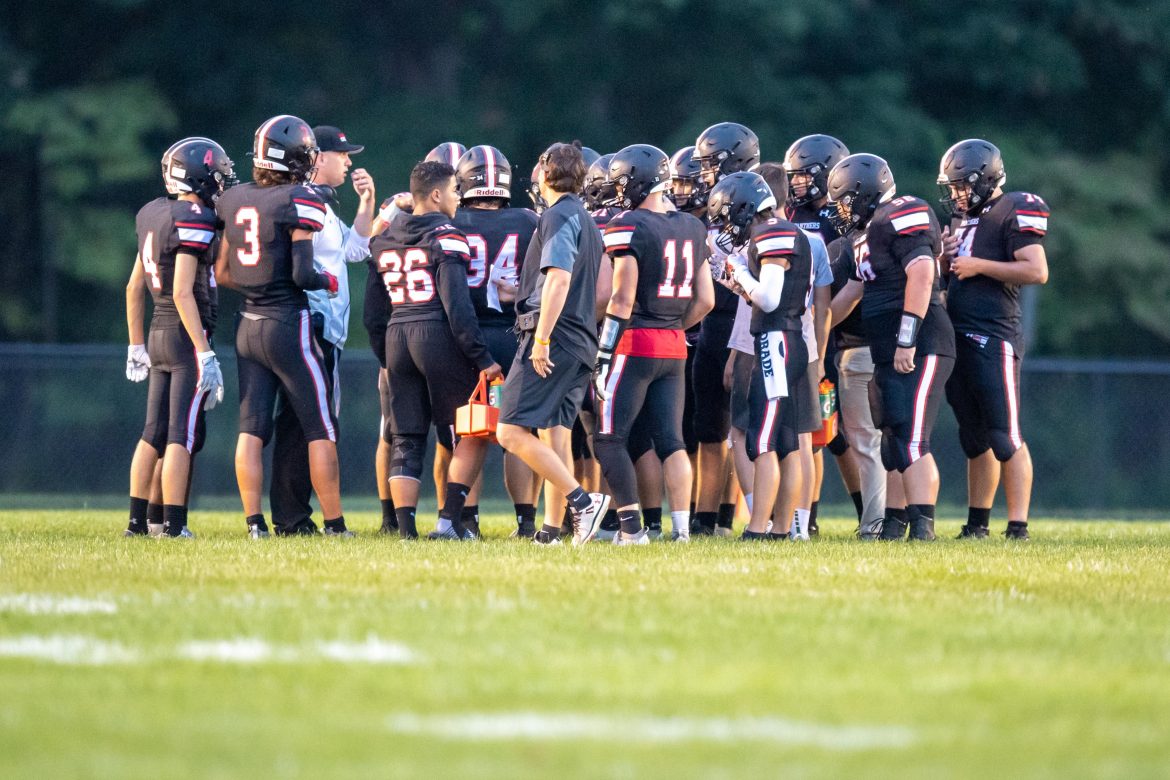 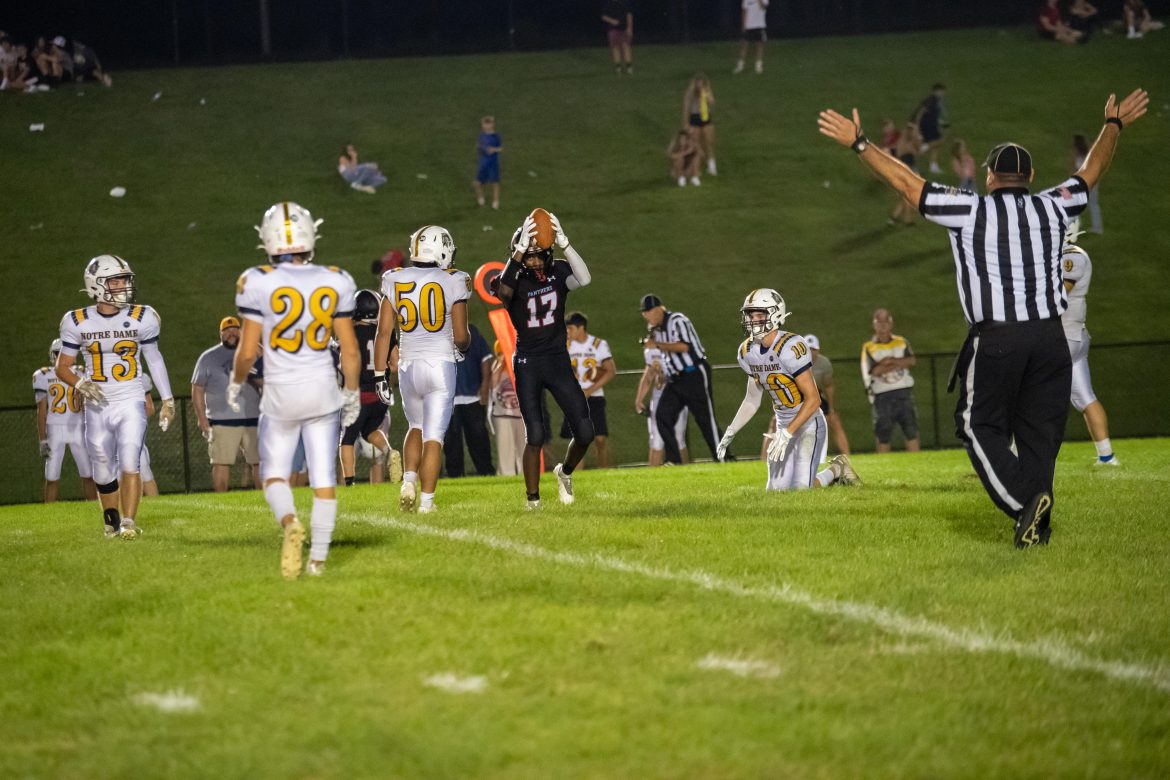 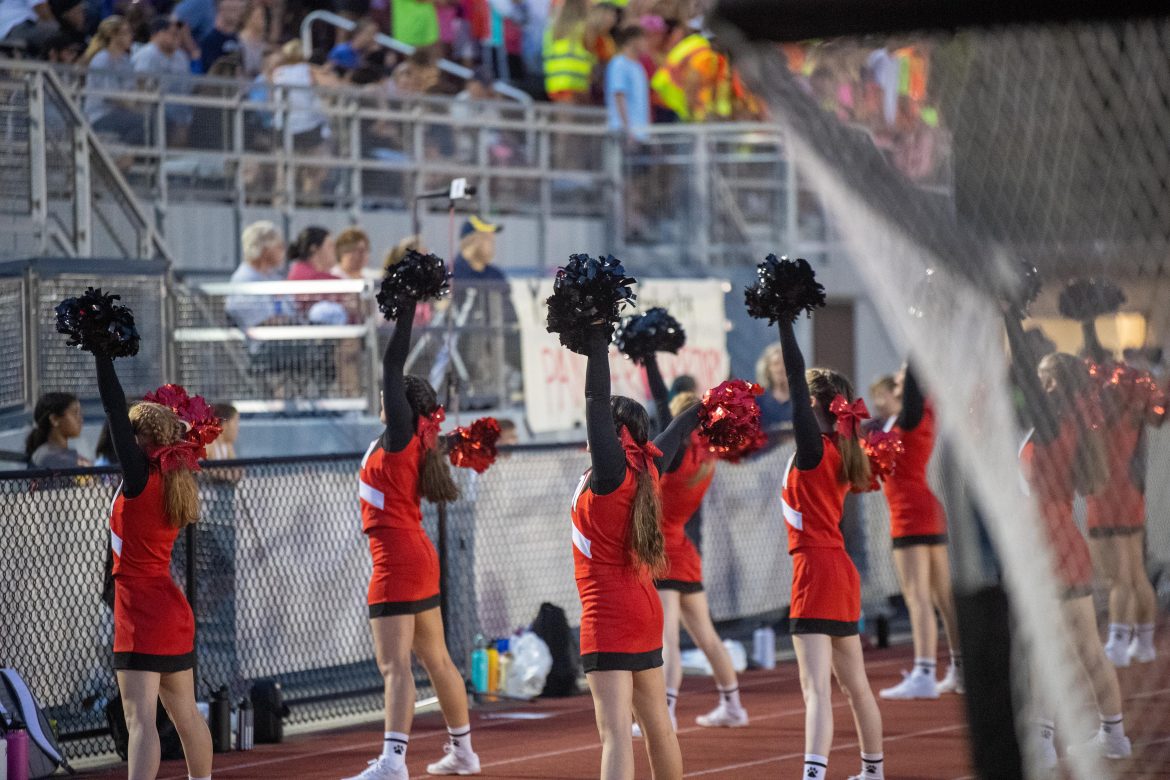