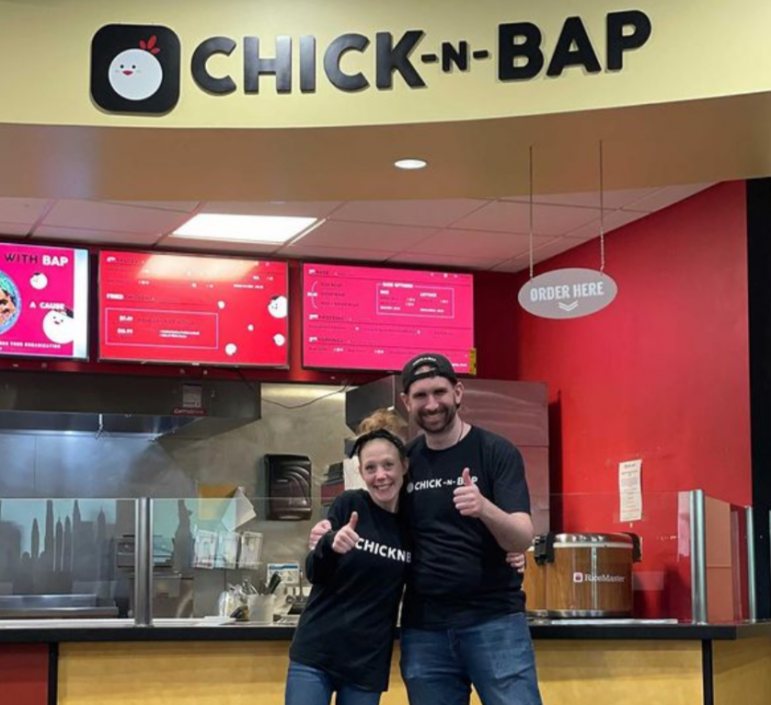 Employees greet customers inside one of Chick-N-Bap’s six locations, all of which are on college campuses in New York and Pennsylvania. The Korean barbecue-inspired chain’s newest restaurant recently opened at Lehigh University in Bethlehem. (Credit: Chick-N-Bap/Instagram)

“Have you eaten bap?”

Asking that question is how many Koreans greet each other.

The word bap means both “rice” and “a meal” in Korean. It is both the primary meal and another way of asking someone how they are. It can symbolize happiness and love, and can represent strength and sharing a common culture, according to the Korea.net article “What Bap Means to Koreans?”

During the Japanese colonial rule of the Korean peninsula as well as the Korean War, having regular meals was rare and many suffered from malnourishment, which helps explain how the simple phrase became such an important part of the Korean language.

Sung Kim, the CEO and founder of the business, said the name is a play on words that describes the Korean chicken and rice bowls that are a popular New York City street food.

He said the restaurant makes all its dishes in-house in order to reproduce authentic Korean flavors. 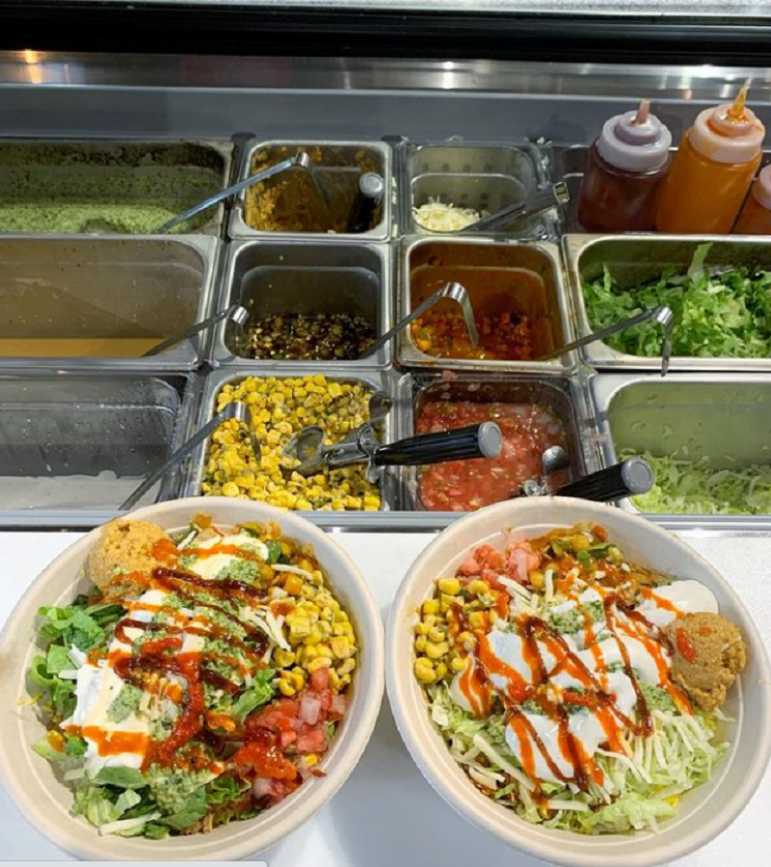 Korean street food bowls are prepared and ready to be served inside Chick-N-Bap, which recently opened on the campus of Lehigh University in Bethlehem.

“We put a lot of love into it, so when everything comes together it does taste, in my opinion, very unique and very interesting–to say the least–for a lot of customers,” Kim said. “I think that’s where we kind of stand out.”

Kim opened the first Chick-N-Bap at his alma mater, State University of New York at Binghamton, after realizing with friends one night that Korean-style chicken and rice meals in many college towns were scarce.

The next night he decided to spend his remaining $250 on groceries at Walmart and start cooking chicken and rice bowls for his college community.

He eventually hosted a pop-up eatery on campus to sell his food and received more response to it than he expected, with demand for his Korean dishes leading to additional openings at SUNY-New Paltz, SUNY-Cortland, Marist College and Ithaca College.

Kim said he wanted to open his newest restaurant at a university that was well-known academically and located in eastern Pennsylvania, and Lehigh fit those requirements.

He said Lehigh rejected his first request to open a restaurant in 2017, but he revisited the school last fall during COVID-19, when his girlfriend had a rotation at a nearby hospital.

Kim said school officials offered him an opportunity to come and re-propose his business concept–since they were less busy–and that they were impressed after trying his food.

During the spring semester, Chick-N-Bap opened a pop-up restaurant on Lehigh’s campus and the response was overwhelming, with a long line forming for food. 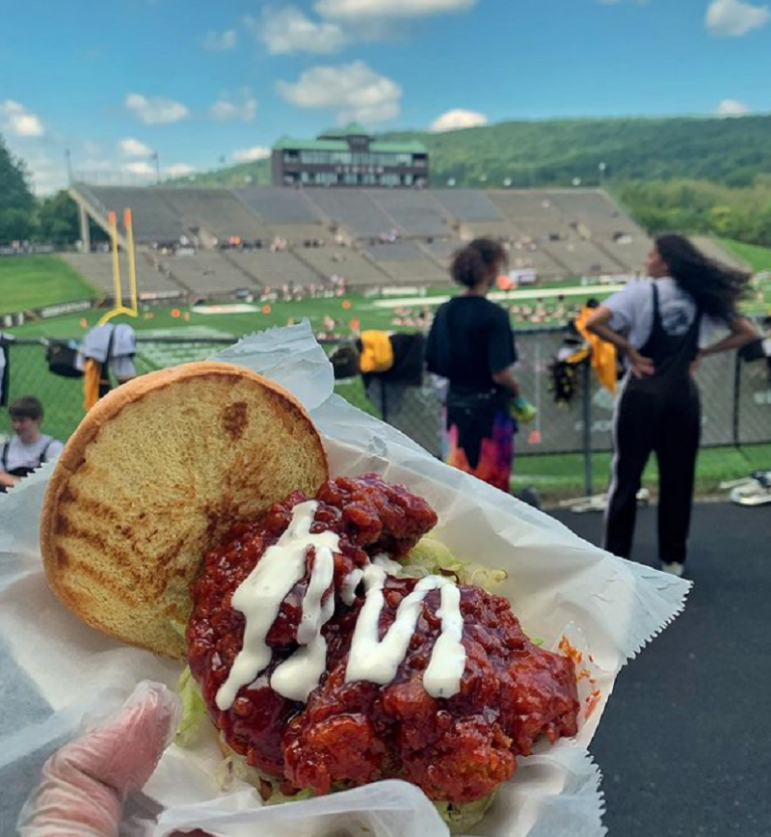 “For me, how I changed as a person through Chick-N-Bap is I realized that it takes a lot more to run a company,” Kim said. “I thought it would be just pretty easy if you have good food and you just serve it and you’re done. But there are a lot of different factors to it.”

Kim said the best part of running his eateries is seeing people’s reactions to the food and hearing them rave about how good it is.

“Getting their reaction has been my drug of choice, and doing it through food I think is just something that’s so rewarding for me, especially spreading the Korean cuisine to people who’ve never heard of kimchi,” he said, referring to the fermented vegetable dish that is a Korean staple. “But now they get to have kimchi on the line here in Bethlehem.”

Jonathan Sarria, manager of the Chick-N-Bap location at Lehigh, said the restaurant’s style of food service is artistic, fun and “aesthetically pleasing.”

He said he enjoys meeting new customers as well as the work he and his colleagues do.

“It’s a very nice environment,” he said. “We create a community here (through) the art we put in our bowls and the passion we put into serving people.” 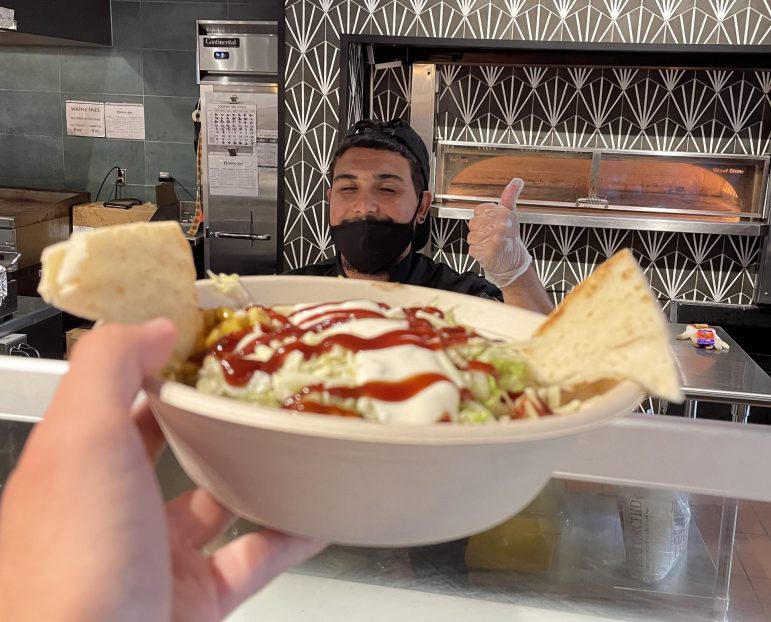 Lehigh University Chick-N-Bap employee Jose Infante gives a ‘thumbs up’ after preparing a specialty dish. Chick-N-Bap recently opened in the school’s university center, where Korean barbecue-inspired street food can now be enjoyed by students, staff and members of the public.

Sarria said the restaurant will benefit the Lehigh community, since it is unique in the area.

He said he hopes it will give Lehigh students a new way to think about how food should be presented and inspire them to explore new flavors.

“I think this place is really good,” said Lucas Xu, ‘24, a Lehigh student who called the food from Chick-N-Bap “delicious.”

Kim said the pandemic has presented challenges for both universities and restaurant operators, and he is still looking to hire employees for the Lehigh location. He added that he is optimistic that they will be fully staffed within the next month.

For more information about the Lehigh Chick-N-Bap–which is open to the public–as well as Kim’s other collegiate locations, photos and more, visit ChickNBap.com and follow the restaurant on Instagram. 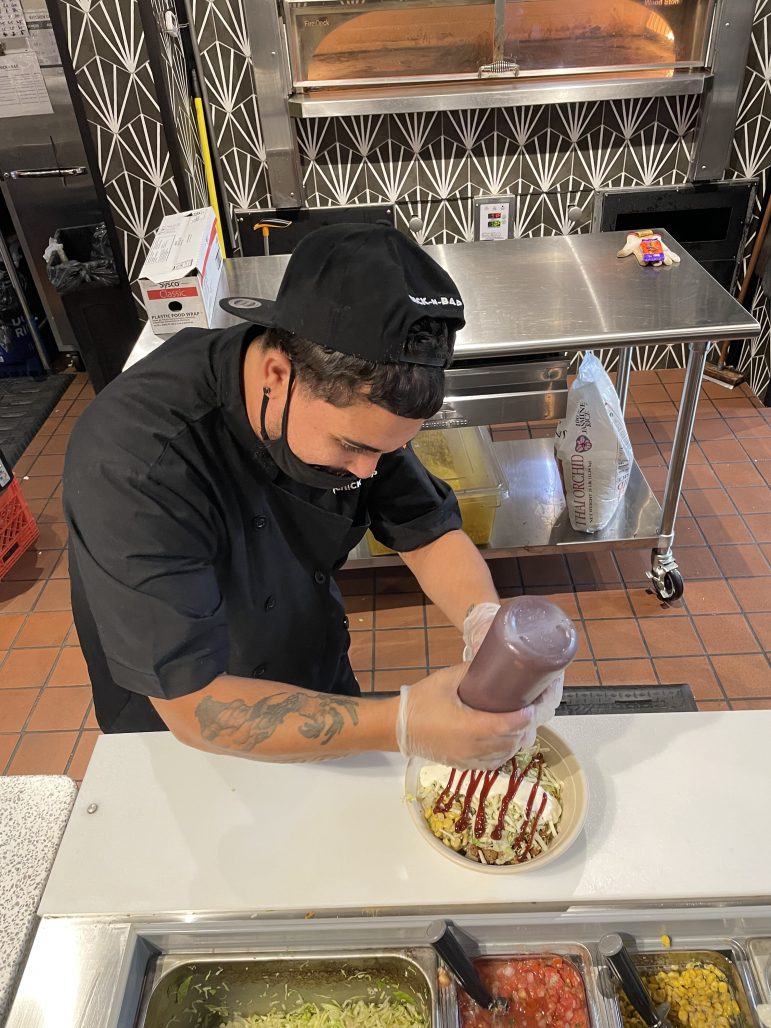 Jose Infante, a worker at Chick-N-Bap at Lehigh University, prepares a street food bowl in the new restaurant’s kitchen.