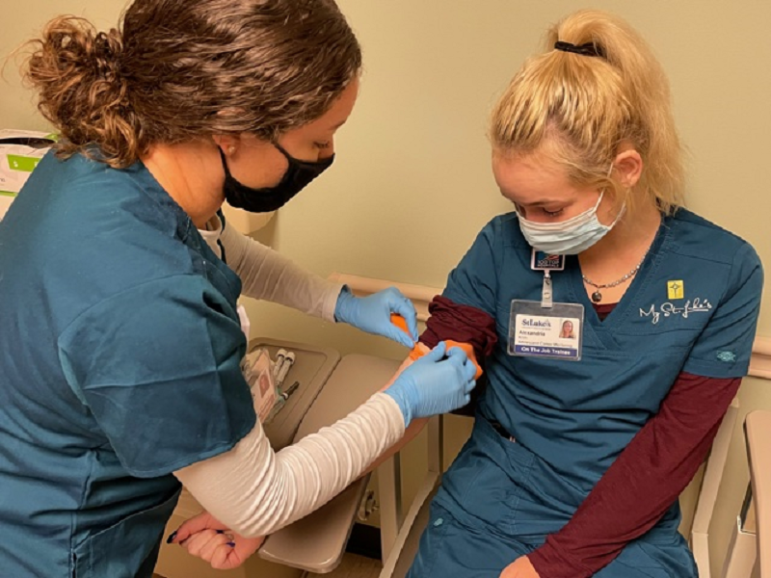 Lexi Krim’s career path has become clearer and more exciting since she was hired by St. Luke’s University Health Network as a phlebotomist.

She was one of a handful of low-income, highly motivated workers with a high school diploma or GED who recently completed the new On-the- Job Training (OJT) program jointly run by St. Luke’s and PA CareerLink Lehigh Valley. OJT places deserving candidates in paid, entry-level, hard-to-fill, high-turnover positions, while giving them a chance for a growth-oriented job in the health network.

Since September, the 21-year-old single mom from Catasauqua had been learning to draw blood at St. Luke’s Bethlehem. She is enthusiastic about “learning new skills I didn’t have experience in,” enjoying classes that taught her about human anatomy and physiology, and learning the proper way to insert a needle safely into someone’s vein in order to draw their blood.

“I love to learn,” said Krim, who studied health occupations at Lehigh Career and Technical Institute and previously provided personal care to residents at Gracedale Nursing Home. She hopes to start nursing school at St. Luke’s next year.

OJT was conceived by Carol Kuplen, president of St. Luke’s Bethlehem Campus and Network Chief Nursing Officer, and Victoria Montero, Network Manager, Health Equity Initiatives in Community Health. They envisioned it as a win-win for the network and the newcomers. And it’s working.

Across the Valley at St. Luke’s Allentown Campus, Laury Gonzalez, also 21 and also a single mom, is a new employee in the hospital’s Sterile Processing Department. She spent the fall learning the six steps to decontaminate, clean and sterilize instruments for surgery and other invasive procedures. Phlebotomy and Sterile Processing OJT trainees are also placed at St. Luke’s Sacred Heart and Anderson campuses.

Just a few months ago, Gonzalez, of Allentown, was unloading tractor-trailers at Lowe’s Hardware and hoping for a new work opportunity, which she found through the OJT program. A truck driver who delivers to St. Luke’s, along with Lowe’s, mentioned the nascent initiative, and she applied and was hired as a trainee. Gonzalez also wants to pursue a nursing degree at St. Luke’s.

“These young women have such motivation to learn and succeed,” said Jackie Finelli, the OJT coordinator and the network’s coordinator of Adolescent Career Mentoring Initiatives. Along with the phlebotomy and sterile processing directors, staff from human resources and other departments, she helped screen, interview and select the three phlebotomy and three sterile processing interns.

“We wanted to be sure they fit with the St. Luke’s culture, have passion and the aptitude that will help them and their department thrive together in the long run,” she said.

St. Luke’s and CareerLink received 200 applicants, both male and female, for the nine positions they plan to fill for this first-year pilot. The jobs were posted on the network and CareerLink’s websites and promoted through the Hispanic Center of the Lehigh Valley. The program hopes to hire a few more trainees for each area.

Finelli cares about each of the women, making sure they were fitting into their departments, feeling challenged and increasing their skills and knowledge in their specialties.

She checked on them weekly, and arranged guest speakers to talk with them about topics like financial literacy, conflict resolution and time management. She encouraged them to aim high in their career aspirations and found ways to help them plan and navigate within the network.

“Jackie motivates us and makes us excited to be in the program,” said an enthusiastic Gonzalez, a Dieruff High School graduate who describes herself as a “non-traditional learner” and has adjusted well to working with her second-shift coworkers. Now officially hired and no longer in training, she will have to become certified in sterile processing within 18 months to retain the job and earn a pay raise.

Jennifer Pardini, the Sterile Processing supervisor, is grateful for Laury and the other OJT trainees, because, she said “there’s always turnover in the department. People move on in their career, and we need to replace them.” Network-wide they help sterilize a quarter-million pieces of hardware per year in the 12 St. Luke’s departments, most of which run 24/7.

Lexi Krim and her fellow phlebotomy trainees finished their formal instruction, having first practiced blood draws on a mechanical ‘simulation’ arm and then on each other as they prepared to start on patients in outpatient offices. Each completed 100 successful ‘sticks’ last month to prove they’ve mastered the skill.

Back in October, Tamara Denby, their instructor, said each trainee was “doing excellently,” steadying their nerves as they honed the technique. She cheered them on as they even practiced on her and encouraged them to develop confidence, saying, “Stop second guessing yourselves.”

According to Liz Taylor, director, Laboratory Outreach Services, the OJT program is helping to pave the way for a new St. Luke’s new School of Phlebotomy. The hospital is recruiting OJT candidates to enter the first school’s class.

The first OJT employees have come a long way since passing a rigorous selection process and joining St. Luke’s initially without experience in their new role, said Finelli. And whether their new job is a stepping stone in their health career or a lifelong position they’ll remain in, St. Luke’s wants them to feel supported and valued.

“They are filling critical job openings here, where there is often a shortage of applicants, which is also making a difference in their lives,” added Finelli. “We welcome each of them to our St. Luke’s family and hope they choose to stay here far into the future.”

Note: This local health content is brought to you in partnership with St. Luke’s University Health Network.