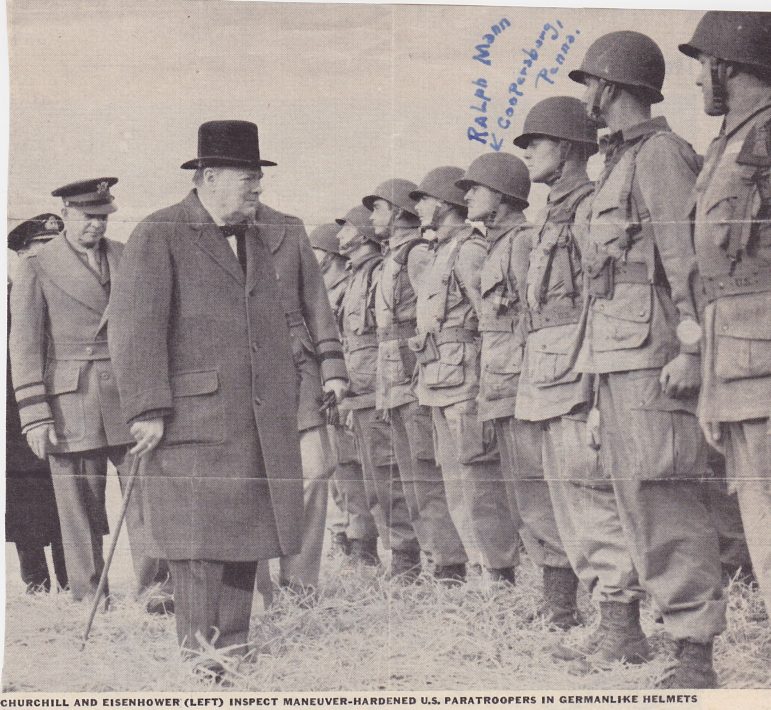 Above, Coopersburg native Ralph Mann and other paratroopers are inspected by British Prime Minister Winston Churchill and Supreme Commander of Allied Expeditionary Forces U.S. Gen. Dwight Eisenhower following the Allies’ D-Day invasion of France on June 6, 1944. Mann was 21 years old and a “Red Devil” in the 82nd Airborne division when he parachuted onto Normandy Beach on D-Day. (Contributed photo)

You’re no doubt familiar with the rotund figure of Winston Churchill in this photo. And of course, beside him is the young leader, General Dwight Eisenhower. What you might not realize is that the fourth soldier from the right is a Coopersburg boy, Ralph Mann.

Ralph Mann was a local hero who helped our nation and our world find peace. A quiet insurance agent and Coopersburg’s tax collector for decades, his memories and accounts of his younger days were fascinating. He told stories of his days as a paratrooper, a “Red Devil” in the 82nd Airborne, when he parachuted onto Normandy Beach on D-Day. This 21-year-old was born and raised on Fairview Street in Coopersburg, graduated from Coopersburg High, delivered the Call Chronicle each morning on his trusty Schwinn and sang the hymns of faith every Sunday at The Mennonite Brethren in Christ Church on North Main Street.

Now he was jumping from the C-47 transport plane into the 2 a.m. pitch darkness.

Breaking the inky black sky were the tracers of anti-aircraft fire coming from strongholds above the beach. He prayed, wondering if he would make it. Hymns from his childhood came to mind.

He hit the ground along the Merderet River at Ste. Mere-Eglise, totally alone. Ralph tore off his parachute and made his way through hay fields looking for his companions. As dawn crept in, he found himself on a farm with curious milking cows following him through the fields. He was sure they’d give his location away, so he crawled along a drainage ditch till he reached a nearby farmhouse where he found other Allied forces who had captured some enemy troops there and holed up for safety awaiting further orders.

A few days later, there in the French countryside, eluding enemy troops, Ralph met up with his brother, Ray, an infantryman who landed by ocean transport on Utah Beach a few hours after Ralph’s descent. What a brief but comforting reunion that must have been.

Both Ralph and Ray made it safely back to Coopersburg. Their lives were changed forever. The peace that ensued around the world allowed a post-war generation to live in safety and security from small towns like ours to the cities and countryside of our land.

Ralph passed away in 2013 at 90 years of age. One of “The Greatest Generation,” he will long be remembered by those on whose life he had impact.

Rick Paashaus is a former pastor at Calvary Bible Fellowship Church in Coopersburg. He has lived in the borough since 1976 and enjoys sharing what he’s learned about the unique history of the Coopersburg area and its people.