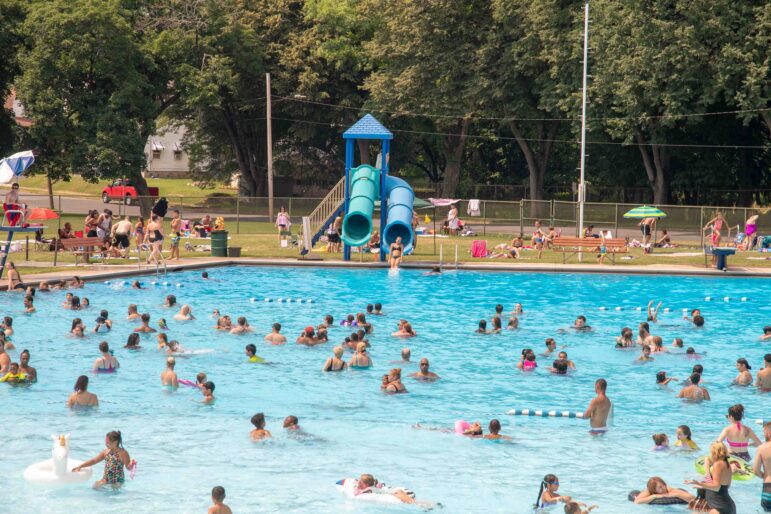 Built in 1939, the Hellertown Pool is one of the largest municipal swimming pools in the area. To entice job applicants, the Borough of Hellertown is offering a bonus to lifeguards who work at least 200 hours there this summer. (FILE PHOTO)

It’s no secret that in many job sectors there are more open positions than takers right now, but in terms of the ability to have fun working in a family-friendly setting that’s close to home (and potentially saving money on gas), officials say summer employment with the Borough of Hellertown is hard to beat.

The money isn’t bad, either, particularly when you calculate the hourly rate to include a $500 bonus seasonal workers will receive if they work at least 200 hours this summer.

Hellertown Borough Manager Cathy Hartranft, who’s in charge of the hiring, said that bumps up the base wages of $11 to $11.50 an hour new and returning lifeguards earn to more than $15 an hour. Staff who work until the end of the season will also receive $400 toward the cost of their lifeguard training certification, which is a job requirement.

Due to the nature of the employment, several clearances are required, however they’re not required to submit an application and the cost of obtaining them is reimbursable.

In addition to hourly crew members to staff the pool and part-time, seasonal workers (who are also eligible to receive the $500 season completion bonus) to help the Hellertown Public Works Department maintain the borough’s renowned park system, Hartranft also needs to fill two competitively-paid manager positions at the pool.

The Concession Stand/Ticket Booth Manager is responsible for scheduling and supervising employees, conducting employee training, ordering food for the stand, money collection and other duties. A ServeSafe certificate is required for the position.

The Aquatics Manager or pool manager is responsible for overseeing the day-to-day operation of the pool facility, including personnel management and training. Applicants must be available from early June til late August and possess several certifications.

Complete job descriptions as well as salary information for the manager positions may be obtained by emailing Hartranft at c.hartranft@hellertownborough.org.

Interested candidates must submit a letter of interest and resume to her by April 1, 2022, which is also the deadline to apply for the hourly opportunities. Application forms for both the lifeguard positions and part-time summer employment with the borough are available online at HellertownBorough.org under Forms. College students, teachers and other adults interested in part-time, summer employment are encouraged to apply.