The sentence “All I want for Christmas is…” often ends with the name of a popular toy, a trendy article of clothing or an exotic vacation locale. In Lehigh Valley municipalities like the City of Bethlehem and Lower Saucon Township, however, what many officials may be asking Santa for this holiday season is a bit more practical: more police officers.

Local departments with open positions to fill are doing their best to recruit officer candidates in a highly competitive job market in which applications to join police departments are down locally, regionally and nationally.

In particular, the article noted, smaller departments are being impacted by the vacancies, some of which have been created through attrition due to retirements and resignations. The New York Times reported last year that police officer retirements increased by 45 percent and resignations increased 18 percent from April 2020 to April 2021, nationwide.

Many of the local police departments that are currently hiring are using various online platforms to help spread the word about their available employment opportunities.

For example, the Bethlehem Police Department has been utilizing its Facebook page to publicize its current hiring effort. 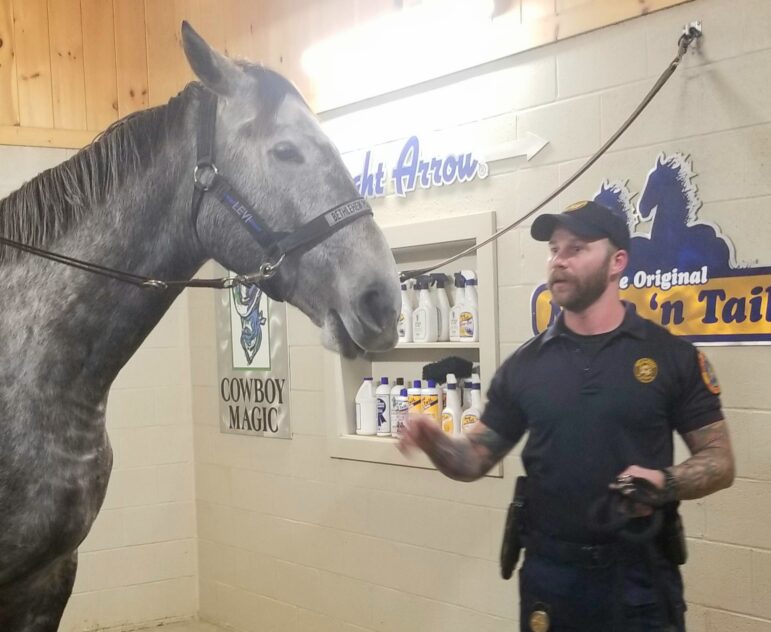 Ofc. Ryan Danko of the Bethlehem Police Department’s mounted unit addresses a Citizen’s Police Academy class at the unit’s barn on E. Langhorne Avenue on Nov. 9, 2022. The mounted unit was recommissioned in 2009 after being defunct for 63 years, and today is one of only about 150 mounted units in the United States. There are eight mounted units in Pennsylvania.

According to a recent post, applications to work for the department opened Nov. 7 and will remain open until Jan. 13, 2023. (There is a $50 nonrefundable application fee.) Applicants will undergo a physical fitness exam Jan. 23 and a written exam Feb. 11.

Per the BPD post, the starting salary for new officers is 2023 is $64,000. There is no residency requirement; officers are eligible to receive pensions after 20 years of service; and tuition reimbursement of up to $15,000 a year is available.

Other benefits include health insurance, 12 paid holidays, paid vacation of up to five weeks, membership in the Fraternal Order of Police union, annual longevity payments after four years of service and annual education bonuses after five years of service.

The Lower Saucon Township Police Department has publicized their job openings on their Crimewatch site, which in tandem with social media and the Nixle alert system is the department’s primary means of communicating information with the public.

According to a department job flyer, applicants must be at least 21 years old, must have U.S. citizenship, must possess a valid PA driver’s license, must have a high school diploma or GED, must be Act 120 certified and must “meet all Municipal Police Officer’s Education and Training Commission required background, physical and psychological standards.” Act 120 mandates completion of a Basic Training Course–available locally at DeSales University–so that all new police officers possess the same critical skills.

In spite of the above requirements, there is no prior experience requirement for anyone interested in becoming a part-time Lower Saucon Township police officer.

Applications can be picked up at Lower Saucon Police Headquarters, 3700 Old Philadelphia Pike, Bethlehem, PA 18015 or downloaded from the employment tab on the department’s Crimewatch site. There is no fee to apply for the position, which the flyer said pays a $1.00/hour shift differential for night and weekend shifts.

According to the results of an Indeed search, the Northampton County Sheriff’s Department and several area colleges are also currently hiring officers.