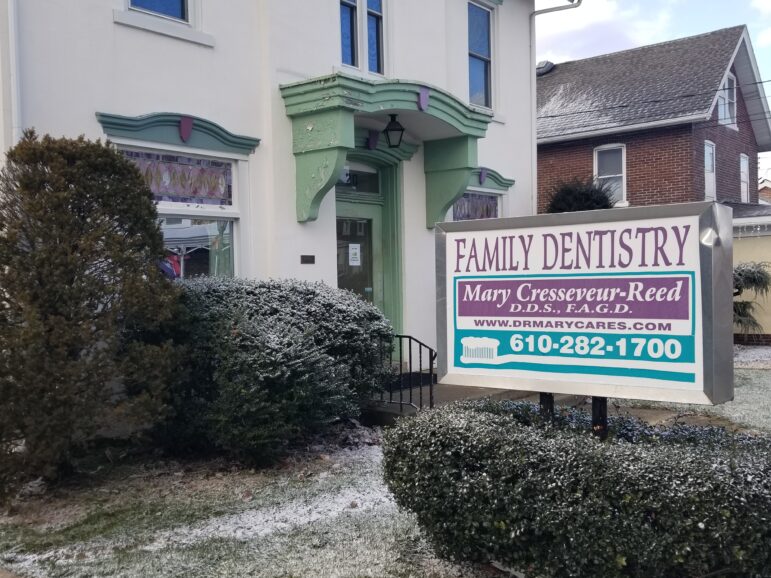 Works by aspiring artist Kyle Ramseur are on display in the downtown Coopersburg dental office of Dr. Mary Cresseveur-Reed. The office is located at 20 S. Main Street, where works can be viewed in the waiting area during regular hours.

If you’re thinking about where to view art a dentist’s office probably isn’t the first place that comes to mind, but that’s where a new exhibit in Coopersburg is located.

The exhibit features works by local artist Kyle Ramseur, who found out about the opportunity to display some of his pieces at Dr. Mary Cresseveur-Reed’s Main Street practice as a patient.

A Lehigh Valley native who lives in Macungie, Ramseur is a graduate of Pennsburg’s Perkiomen School as well as the Maryland Institute of Art in Baltimore, where he majored in illustration.

“I’ve always been drawing, doodling, stuff like that,” he recalled. “In high school I actually made my own company. It was Ramseur Cartoons.” 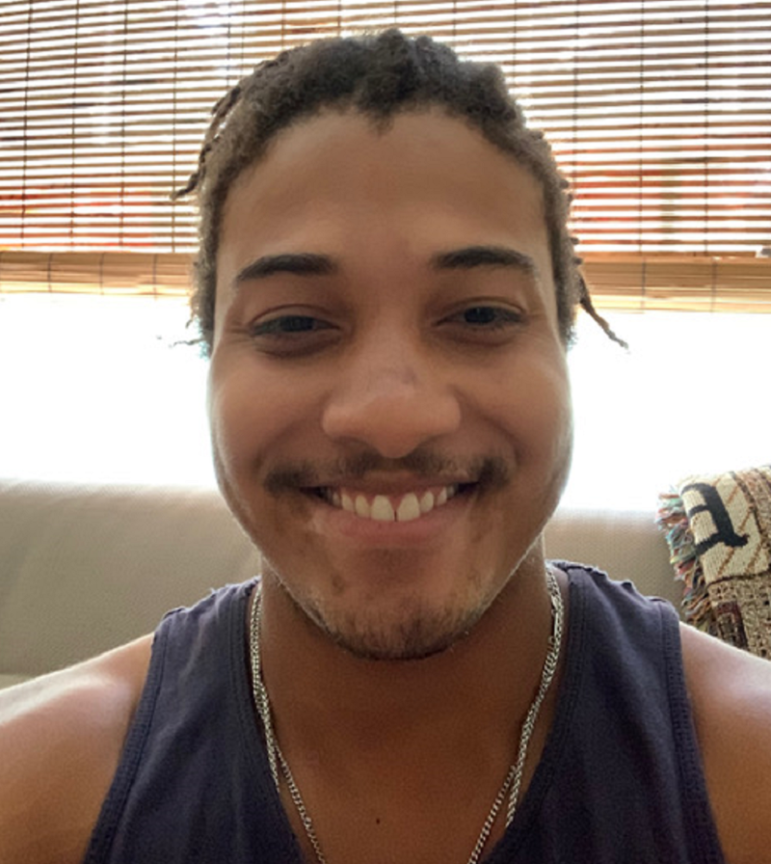 Kyle Ramseur is a recent graduate of the Maryland Institute of Art in Baltimore. Some of his works are on display in Coopersburg at the dental office of Dr. Mary Cresseveur-Reed. (Contributed photo)

From there, he began designing artwork on t-shirts that became a hit with some of his peers; an experience he said gave him his first taste of the recognition he’s now enjoying.

In college, Ramseur said he discovered watercolor illustration, which he likened to the well-known political cartoons that appear in publications like The New Yorker magazine.

Another use of this type of illustration is in courtroom drawings, he noted.

Ramseur is currently pursuing work as an editorial illustrator, while still pursuing his own creativity.

“Art is always a tough field,” he acknowledged. “A lot of people think that art is a luxury. There are people that buy art, and they really don’t have any concept of what it means.”

However, that could be changing. One positive side to the Covid pandemic, Ramseur said, is that it has encouraged many people to try their hand at artistic endeavors. 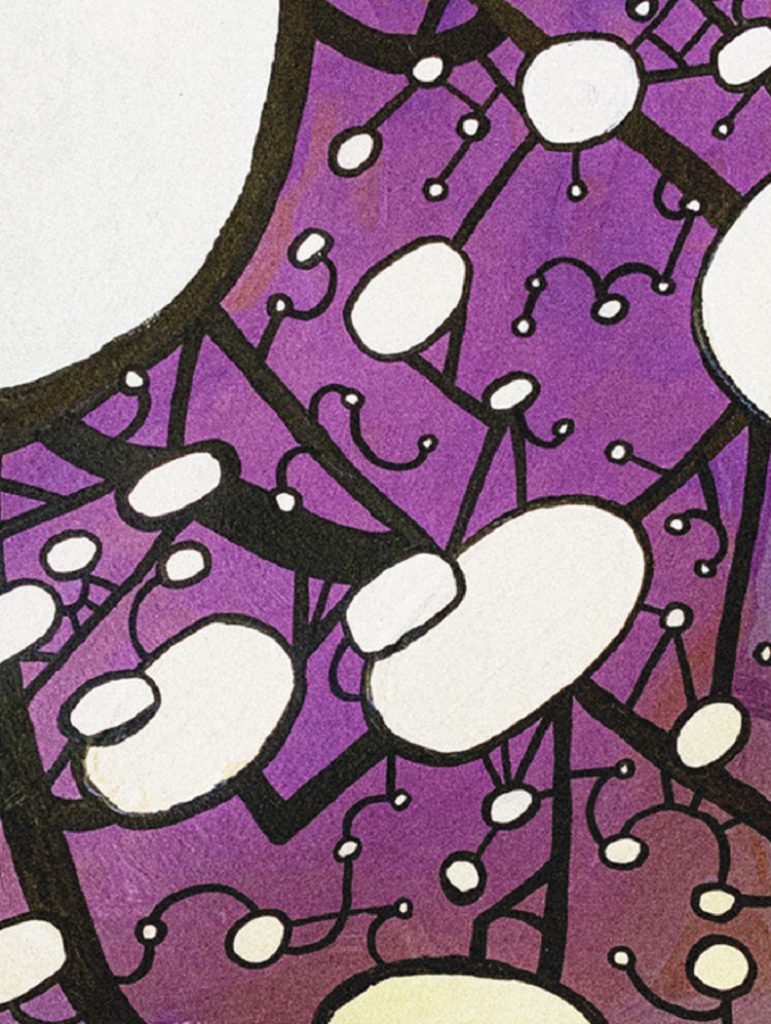 Social media has opened doors for artists to find new audiences, but the algorithms the companies control can also complicate how people see it on those platforms, he said.

His influences include Jean “Moebius” Giraud and Jean-Michel Basquiat, an artist whose renown has grown considerably since his untimely death at the age of 27 in 1988.

“I think just seeing him–seing a black guy making art that is now worth (millions)–that was inspiring,” said Ramseur, who said he relates to Basquiat’s neo-expressionist, “stream of consciousness” style.

Inspirational places for him include Baltimore and the natural surroundings in his native Pennsylvania, although he mused that landscapes aren’t his forte.

“I cannot paint just a regular snowy tree to save my life,” Ramseur said with a chuckle.

Outside of Coopersburg, his works have also been displayed at MICAs Senior ArtWalk, FYE: Empathy Art Exhibit and The Collector’s Corner in Baltimore, and one of his goals is to have his works displayed in curated gallery showings in the future. 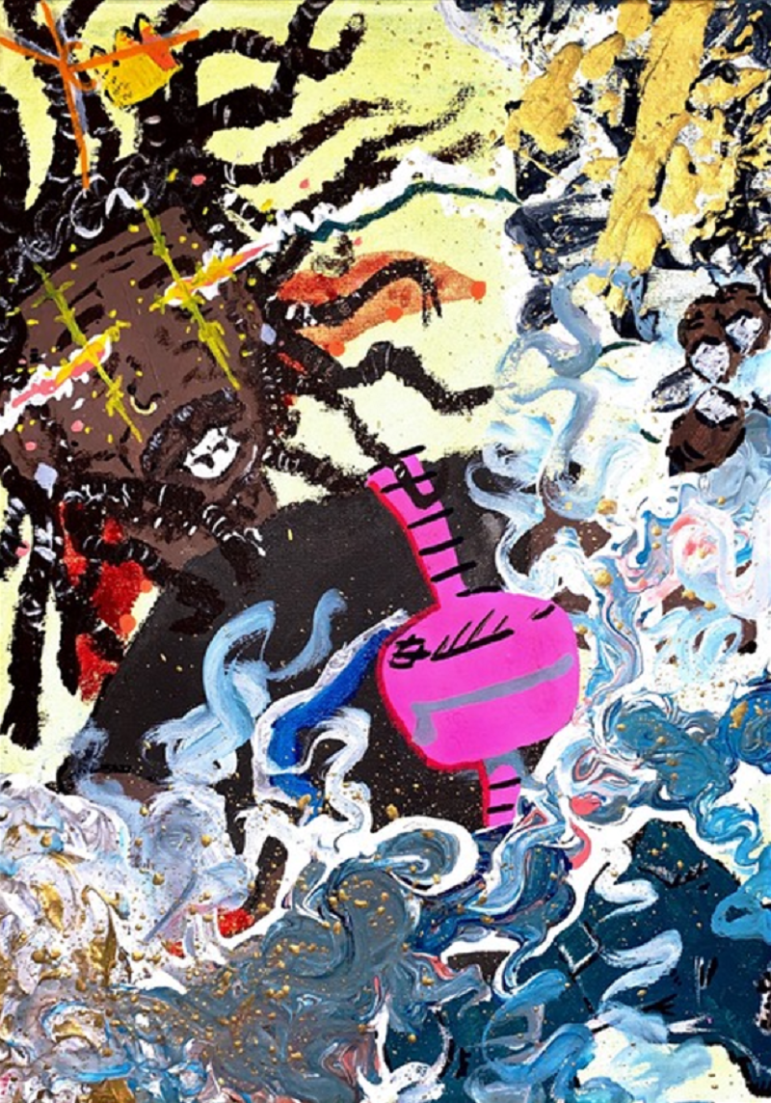 Ramseur said he has known Cresseveur-Reed “basically his whole life” and knows her family from attending school with her sons.

“Through everyone’s kindness there we realized there was some space there,” he said, and from there it was just a matter of mounting his works on walls in the waiting room and other parts of the practice.

The office is located at 20 S. Main Street in downtown Coopersburg. More information about it is available at CoopersburgDental.com.

The best way to connect with Ramseur and to view more of his art is to follow him on Instagram @kyleramseurart or visit his Ramseur Arts website. He can also be reached via email at ramseurkyle@gmail.com.