The large banners hung high above Hellertown’s Main Street–which many Saucon Valley organizations use to advertise their upcoming events–are hung from PPL-owned poles. And because of new requirements by PPL, the approval process for the banners is going to take longer, Hellertown Borough Council learned Tuesday. 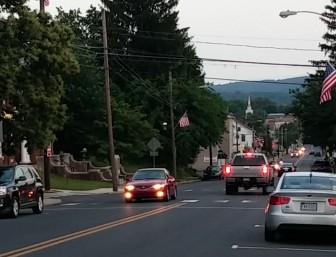 PPL now wants to see a banner design proof before it consents to the use of its poles, public works director Tom Henshaw said.

Henshaw said the borough will now need to submit that proof to PPL in order to receive approval.

That could be challenging, because in some cases, he said “I don’t get the banner until the day it goes up.”

“They’re asking for things that we can’t really do,” he remarked.

Borough manager Cathy Hartranft said “people are just going to have to understand that the process to get approval is going to take a lot longer.”

“Those banners are very important to the organizations,” councilman John Bate said.