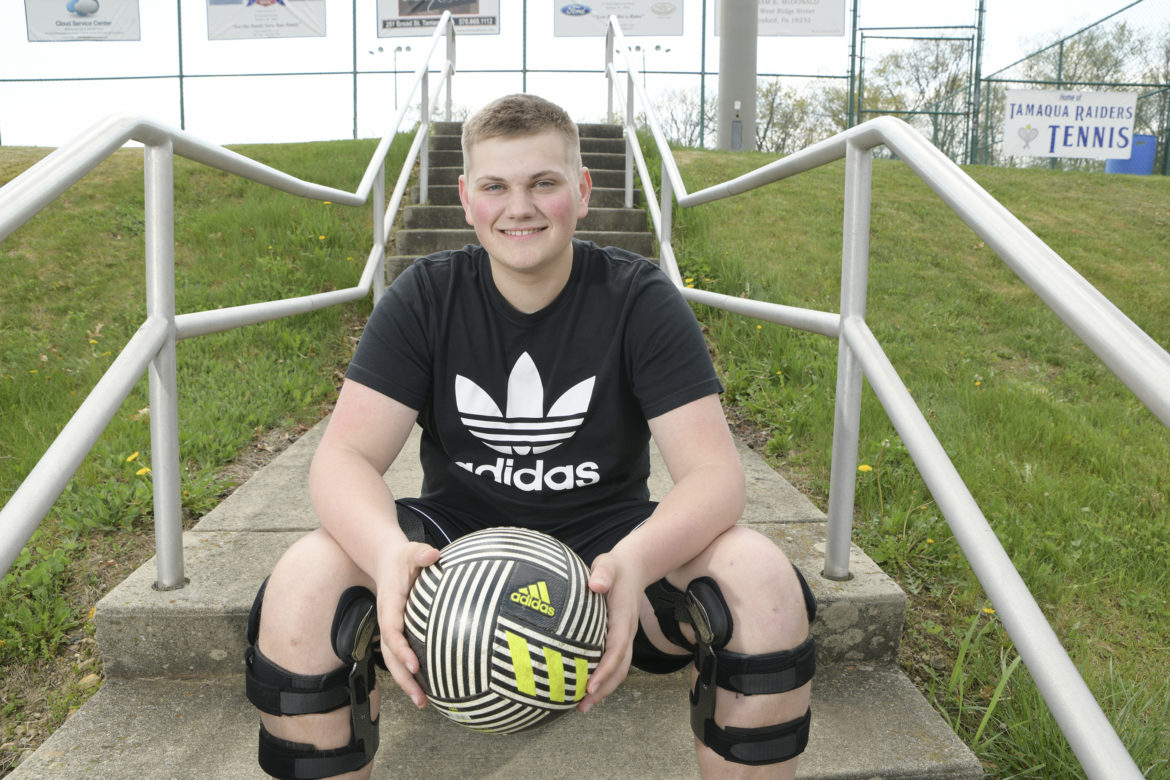 Tamaqua athlete Mason Dolinsky poses with a soccer ball on May 9, 2018. Dolinksy, who is being featured as a St. Luke's Extraordinary Athlete, will be interning at St. Luke's Miners campus this summer.

Mason Dolinsky saw the soccer ball heading directly into the net, just outside his reach, and knew he needed to jump.

A starting junior goalkeeper for the Tamaqua Area High School varsity soccer team last fall, Mason willed himself into becoming the only obstacle between the ball and the goal. With a mighty leap, Mason jumped into the air and not only got to the ball, but made the save. There was just one complication, a major one. He landed hard on his left leg, tearing the ACL. 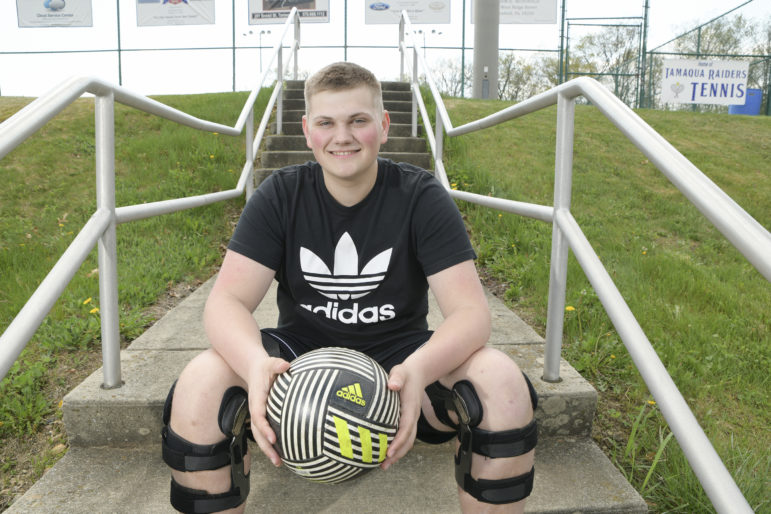 Tamaqua Area High School student and soccer goalie Mason Dolinsky poses with a soccer ball on May 9. Dolinksy, who is being featured as a St. Luke’s Extraordinary Athlete, will be interning at St. Luke’s Miners campus this summer.

Today, Dolinsky is back on his feet defending the goal thanks to incision-less surgery performed by Chandra Reddy, M.D., an orthopedic surgeon with St. Luke’s Orthopedic Care working out of St. Luke’s Miners Campus in Coaldale, Schuylkill County.

Dolinsky’s extraordinary recovery is particularly remarkable considering he had torn the ACL in his right knee just two years earlier.

“Most people say you feel a lot of pain when you tear an ACL,” Mason says. “I didn’t feel any pain in either of my tears. The first one, I played a couple of games with it. This second one, I knew it was more serious.”

“I took his own hamstring autograft and did it all inside,” Dr. Reddy explains. “It was completely arthroscopic, so he had no incision. It was all keyhole surgery.”

Mason is certainly an extraordinary athlete after coming back from the first surgery, and is taking the same approach in his comeback from the second.

“The first injury was heartbreaking because soccer was taken away from me,” says Mason, who has a second-degree black belt in karate and used to play catcher in baseball, which always left his knees feeling sore.

Mason received extraordinary care not only from Dr. Reddy, but also from his physical therapists. Brendan Kash, PT, DPT, LAT, ATC, finished up his rehabilitation after the first surgery and is guiding him through his second physical therapy stint.

When Mason first tore the ACL in his right knee in October 2015, he attempted to kick a soccer ball and struck the ground with great force. He put up with the pain for two weeks–discipline he learned from karate and baseball–before finally seeing Dr. Reddy.

Because Mason was 14 at the time, the growth plates in his bone hadn’t closed yet, so Dr. Reddy pinned the autografted strain of hamstring muscle to a different location.

One of the reasons Mason’s mom and dad, Michelle and Rick, chose Dr. Reddy for the surgery is that he offered them to get a second opinion and an option to go to Children’s Hospital of Philadelphia.

“He gave us a second option, and I was impressed with that,” Michelle Dolinsky remarks. “He drew pictures, told us everything he was going to do and was always straightforward with us. He had a confidence about him and didn’t pull any punches. I didn’t know one doctor from the next, but when he told me he had worked at Shriners Hospitals for Children in Philadelphia, that impressed me.”

Dr. Reddy says Mason is so in-tune with his physical therapy regimen this time around that he’s ahead of schedule, but being held back to ensure the reconstruction has enough time to properly mend.

It requires six to nine months of rehabilitation to be cleared for full contact, and Mason is primed to return to the soccer field for his senior year at Tamaqua. A straight A student, he’s been considering a career in medicine and will be shadowing a variety of doctors within the St. Luke’s University Health Network this summer to understand everything from orthopedics to anesthesiology.