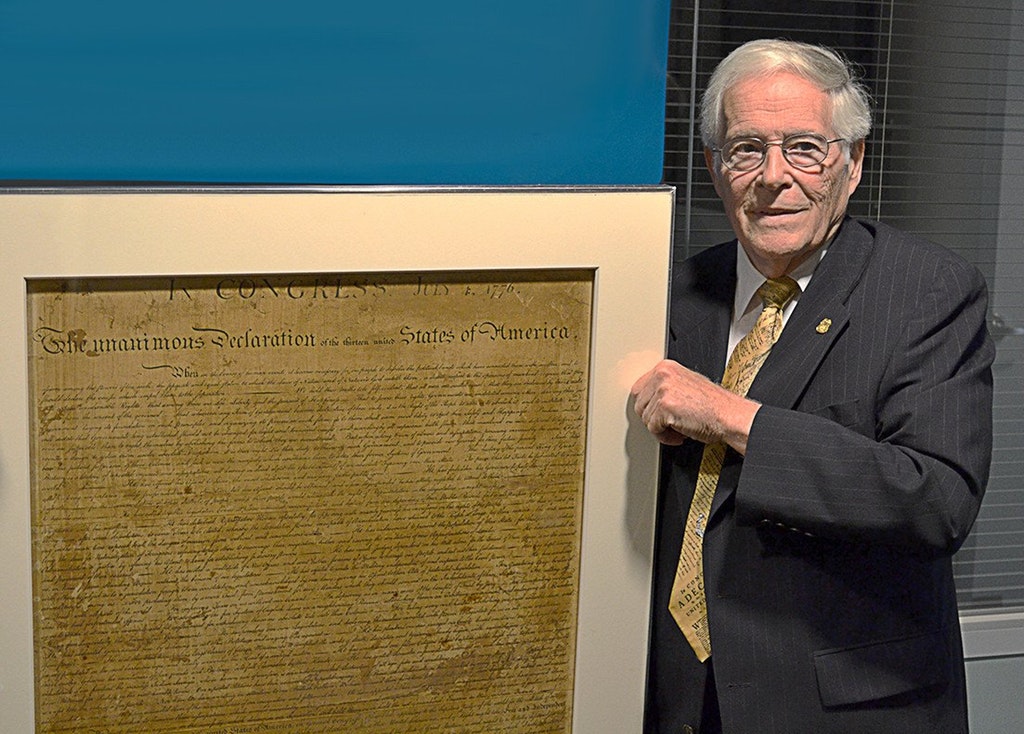 Historian Tom Lingenfelter of Bucks County holds his rare anastatic copy of the Declaration of Independence, which will be displayed at the National Museum of Industrial History in Bethlehem on Independence Day from noon to 5 p.m.

Note: The following is a news release from the National Museum of Industrial History.

An exceptionally rare copy of America’s founding document, the Declaration of Independence, will be on display Sunday, July 1 during a program on anastatic printing at the National Museum of Industrial History in Bethlehem. The copy, measuring 2’ 6.5” by 2’ 1.5”, is owned by historian Tom Lingenfelter. The document is one of only two known of its kind; the other resides in Independence Hall in Philadelphia.

The anastatic copying process is an obscure one that was developed and patented in the late 1840s. The process was promoted and practically developed by Werner and Wilhelm Siemens–the former being the founder of the electrical conglomeration Siemens AG–but quickly faded into obsolescence with the advent of photography and other printing technologies.

Lingenfelter will hold a presentation on the anastatic process, which used an acid-based solution and direct contact with the original document to create copies, at 1 p.m. on July 1. The event is free with regular museum admission.

The Declaration copy will also be on display on Independence Day from noon to 5 p.m. in the museum with Lingenfelter on hand to answer any questions.

Lingenfelter, of Bucks County, is a historian and President of the Heritage Collectors’ Society. He earned a B.A. in history at The Kings College in New York. Long a collector of historic artifacts, he has performed historical appraisals for the White House and has frequently been interviewed by local and national media.

“We are ecstatic that such a rare and important part of our country’s history will be displayed at NMIH,” said Kara Cenni, President and CEO of the museum. “This event is a glimpse into the background of not only this nation’s founding, but the historical printing industries in the United States.”

This special event is part of the museum’s latest exhibit, “Hot Off the Press: Printing and Papermaking,” a hands-on look at how the printed word revolutionized the spread of knowledge throughout the world, running now through October. From the Gutenberg press to linotype machines, like those seen in the hit movie The Post, NMIH’s exhibit gives an in-depth and interactive look at how printing presses, paper, and ink were used to spark the most influential industry on the planet. 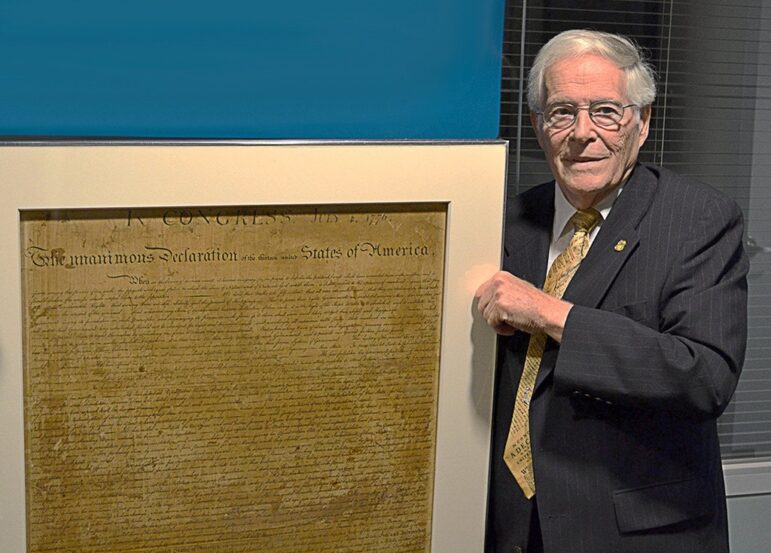 Historian Tom Lingenfelter of Bucks County holds his rare anastatic copy of the Declaration of Independence, which will be displayed at the National Museum of Industrial History in Bethlehem on Independence Day from noon to 5 p.m.ry