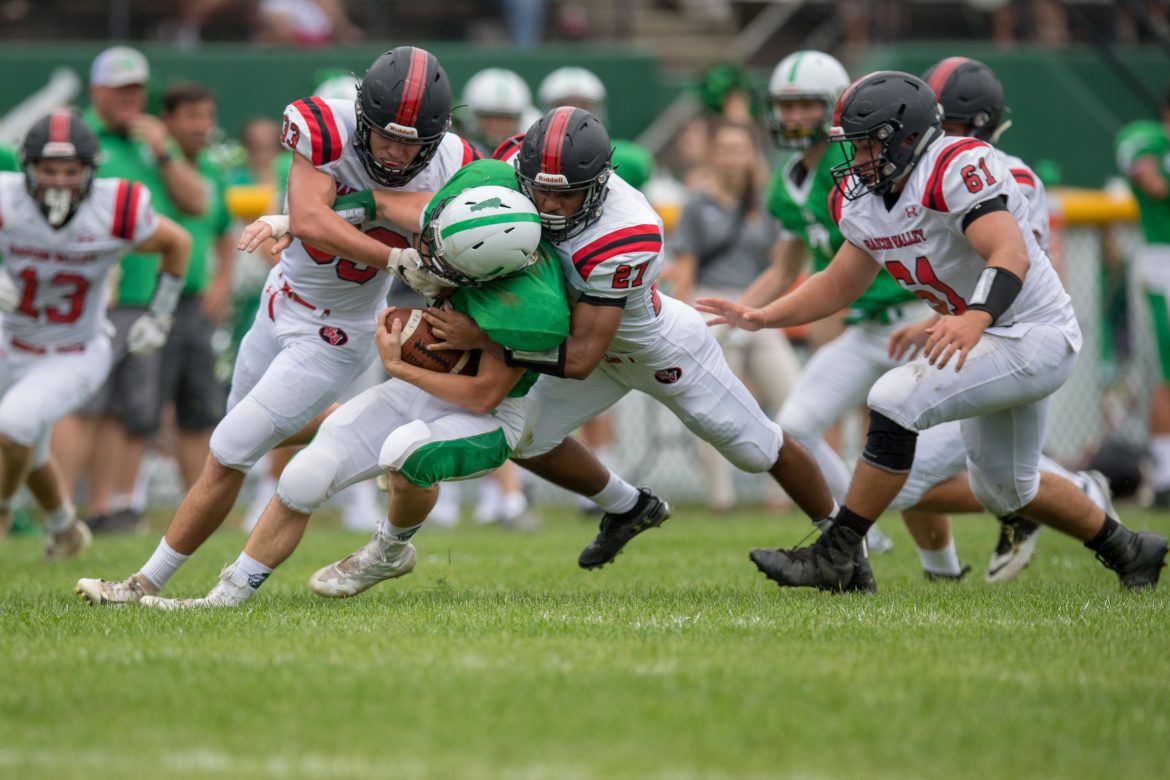 It didn’t take long for Coach Sams and his Saucon Valley Panthers to follow up last week’s great road victory at Southern Lehigh and impose their will upon the Pen Argyl Green Knights on Saturday.  The Panthers proudly pounced upon the Green Knights with a diverse offensive attack and a stifling defense.  Saucon rolled up 22 1st-Downs and over 500 yards of total offense on their way to jumping out to a 35-0 halftime lead.  Defensively, the Panthers held Pen Argyl to only three 1st-Downs and 71 total yards.  Saucon’s “D” also gathered themselves an interception and fumble recovery along their road to victory.  It was an all-around dominant performance by the Panthers. 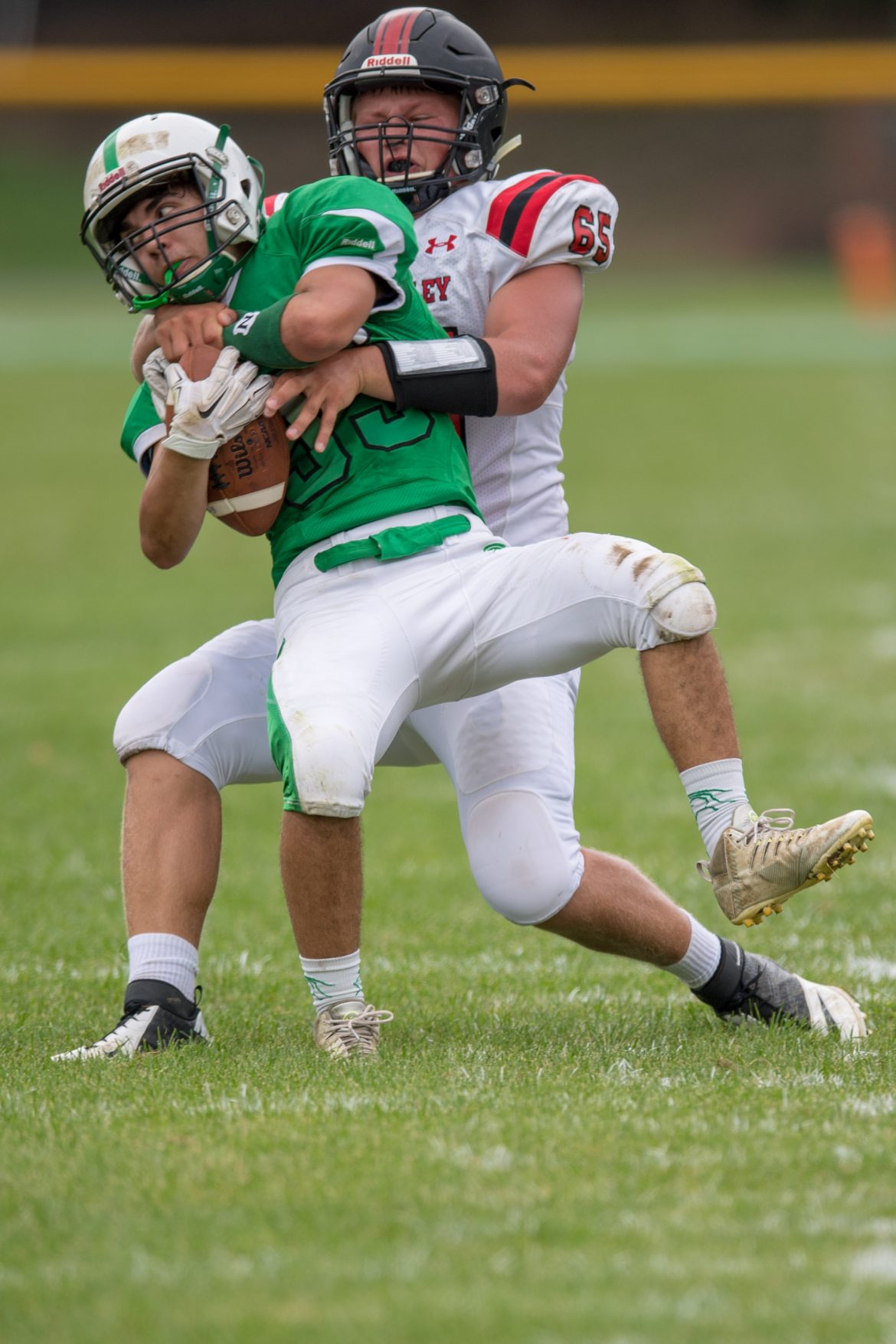 Starting out on defense, it took very little time for the Panthers to get the ball from the Green Knights.  After a short Panther kickoff and a decent Pen Argyl return, the Green Knight offense took possession at their own 39-yardline.  However, Pen Argyl could not move the sticks and was forced to punt after going three-and-out.  Saucon started their first possession on their own 35-yardline and methodically marched down the field for their first touchdown of the day.  It took the Panthers eight plays to cover the 65 yards to paydirt.  The drive concluded with a 9-yard touchdown run by Ian Csicsek who walked into the endzone courtesy of a well-executed counter play.  Sean Cyphers added the PAT to give the Panthers a 7-0 lead with 7:03 left in the 1st Quarter. 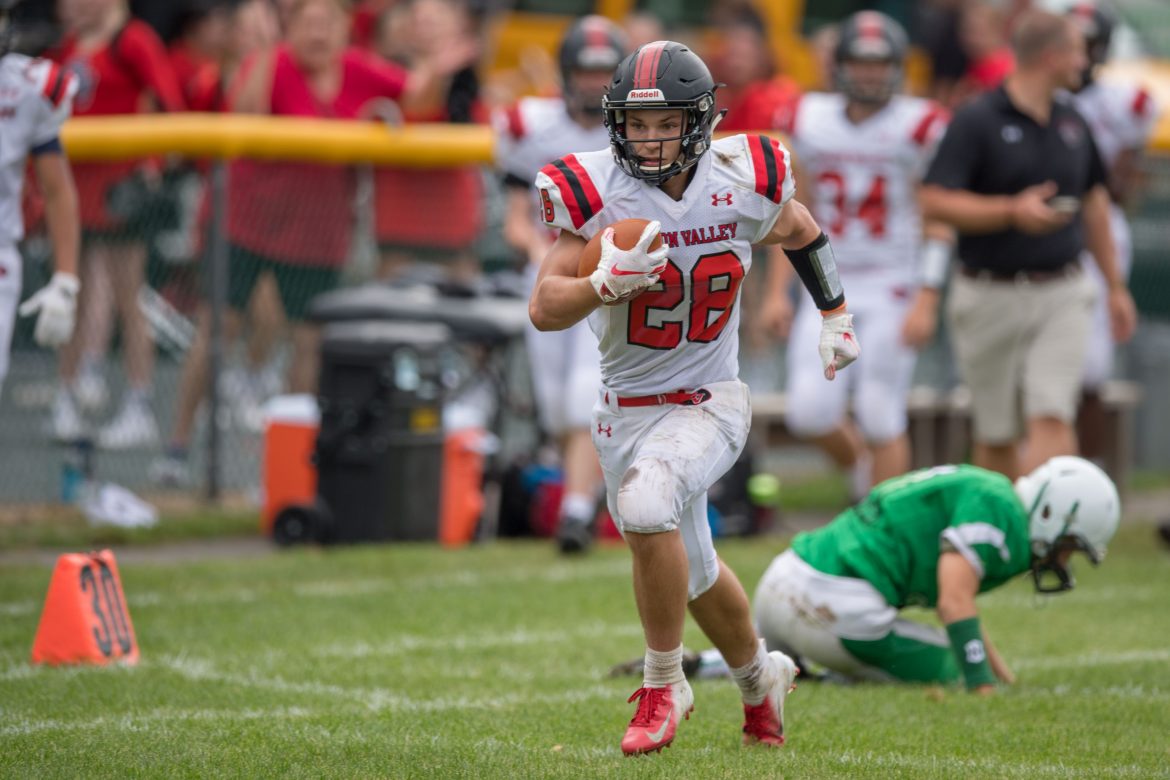 The pattern of the game seemed to establish itself.  The Saucon defense would hold Pen Argyl to a three-and-out followed by the Panthers driving the field for another touchdown.  Csicsek scored a 1-yard touchdown run with four minutes left in the 1st Quarter.  Then, following another three-and-out punt by Pen Argyl, Csicsek and the Panthers capped a 10-play drive for a 2-yard score. With 11:11 remaining in the 2nd Quarter the Panthers led 21-0.

Immediately following a sequence that consisted of a Green Knight interception and a Panther fumble recovery by Jared Harka, Saucon Valley scored again when Dante Mahaffey threw a 21-yard touchdown pass to Ryan Holub on a “fade” route.  Holub beat his single-coverage and out-jumped his opponent on a well-placed pass from the Panther freshman quarterback.  With 6:07 left in the 1st Half, Saucon Valley extended their lead to 28-0. 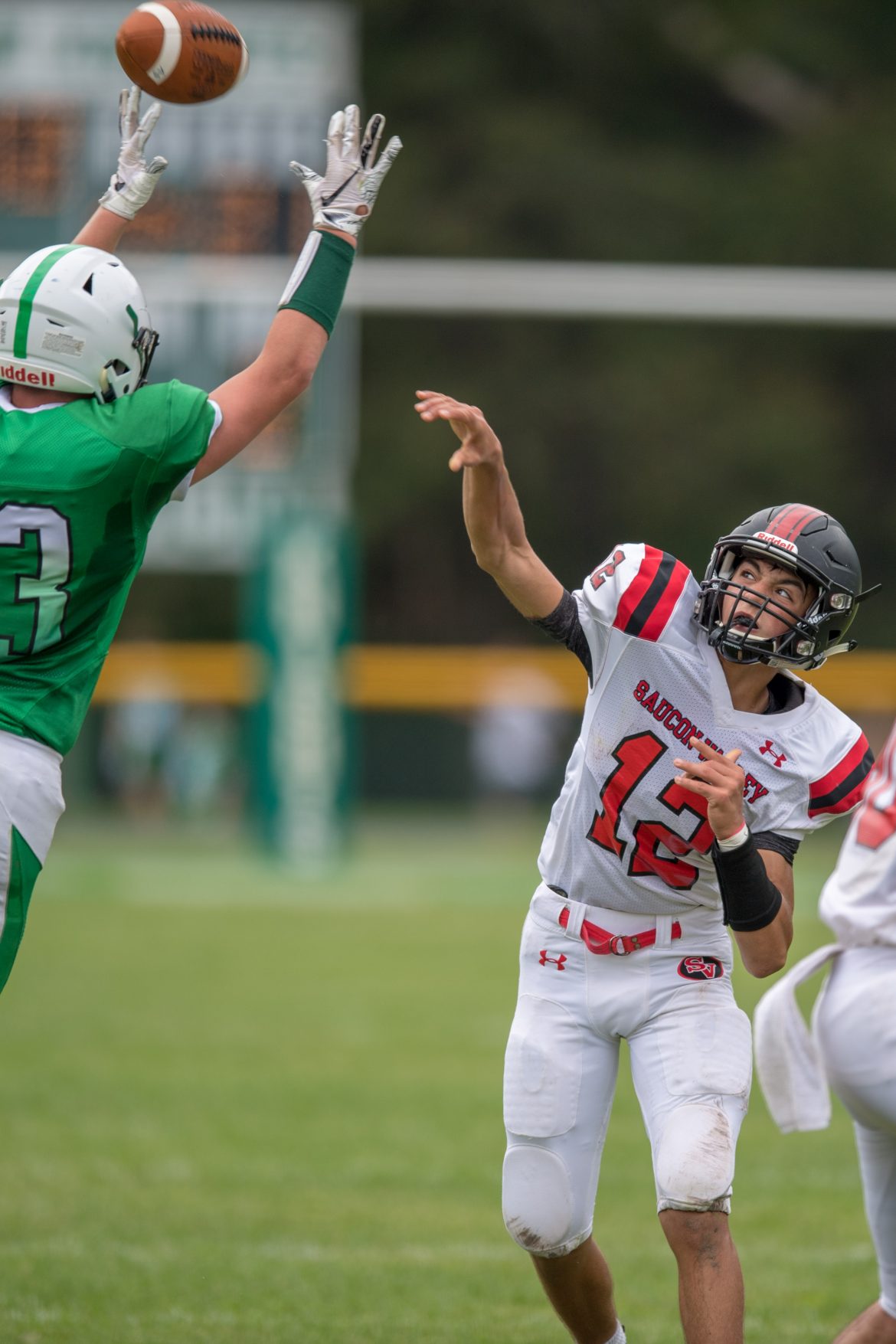 Panther freshman quarterback Dante Mahaffey (#12) finished the day completing 7 of 11 passes for 129 yards and a touchdown pass to Ryan Holub.

On the ensuing kickoff, the Green Knights were able to break contain and spring free for a big kickoff return all the down to the Panther 20-yardline.  Two plays later, however, Saucon Valley’s Justin Kyra from his cornerback position was able to snag a Pen Argyl pass for an interception.  Kyra’s pick and return put the Panther offense back in business at their own 30-yardline.  On the very next play, Csicsek took a handoff around his right end and sprinted 70-yards for his fourth and final touchdown of the day.  Cyphers connected on his fifth and final PAT of the day.  Not only were the Panthers up 35-0 at the halftime break, but their stingy defense only surrendered one 1st-Down to the Green Knights.  It was a dominating showing for Saucon Valley. 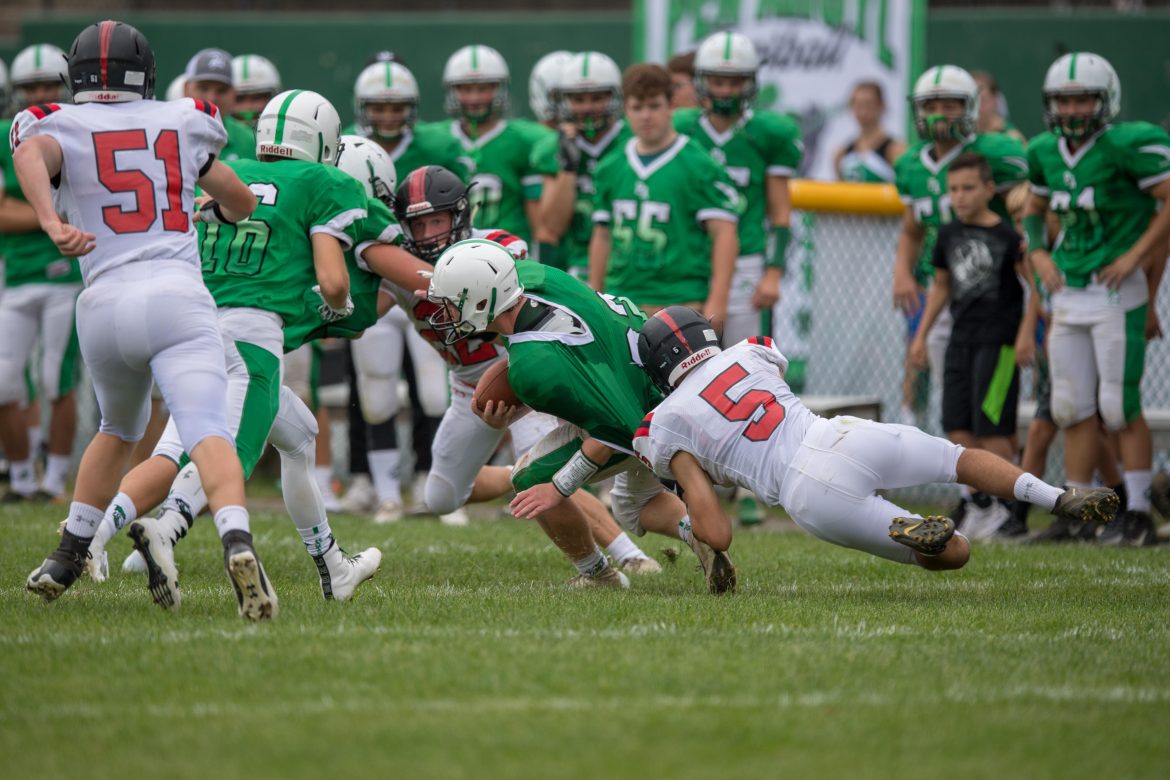 Saucon Valley’s Aiden Renninger (#5) showing off in front of his Pen Argyl pals.

With the mercy-rule clock enacted to start the 2nd-Half, Saucon Valley’s offense possessed the ball for all but the final seconds of the 3rd Quarter.  The Panther drive advanced all the way to the Pen Argyl 18-yardline, but finally stalled with a Sean Cyphers 35-yard field goal attempt.  The Green Knights then drove back to the Panther 10-yardline where they had to settle for Eric Lobb’s 30-yard field goal that made the score 35-3.

Saucon Valley, however, was not finished. With about six minutes remaining in the game the Panthers crafted and 80-yard drive that finished with a C.J. Stump 1-yard quarterback sneak to end all scoring.  The 2nd-Half workhorse for Saucon was fabulous freshman Damian Garcia.  Garcia finished with 125 yards on 17 carries from his tailback position.  When the final buzzer sounded it was a convincing 41-3 Panther pummeling. 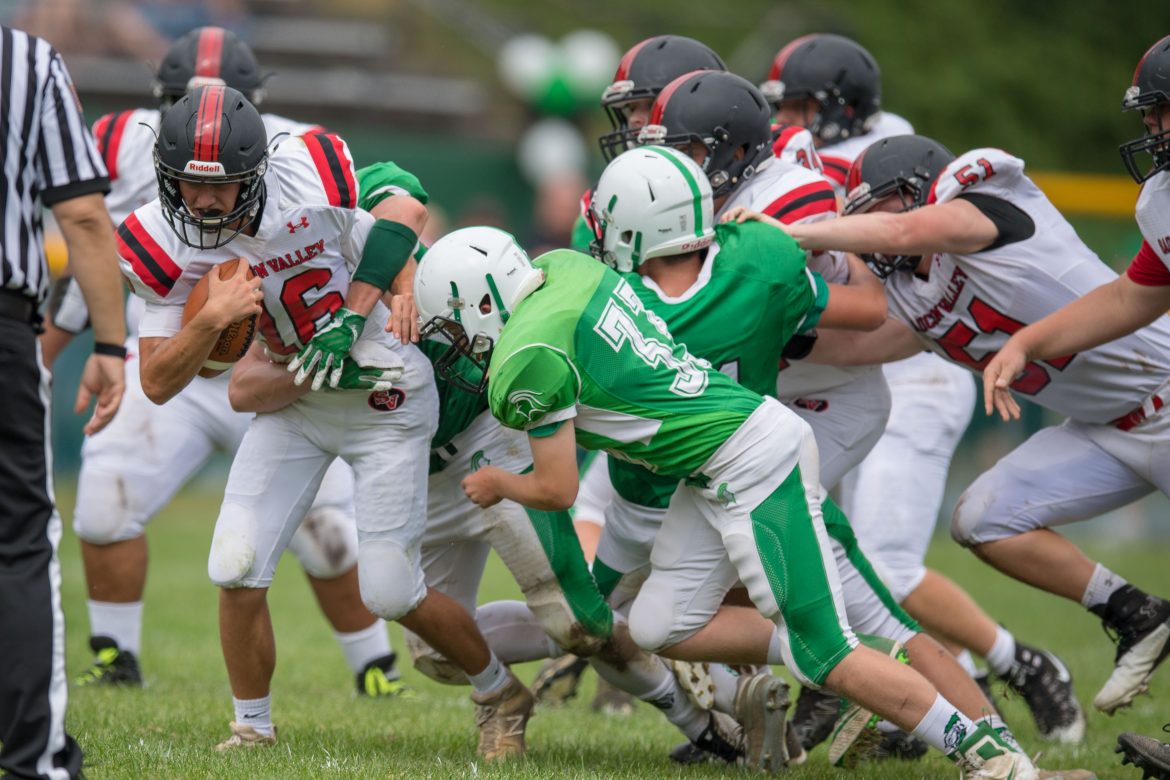 Up Next: Saucon will prepare for Friday night when they play host in their 2018 home opener against the Palmerton Blue Bombers (0-2).  The Blue Bombers lost 49-14 to Palisades Week One and 33-14 to Southern Lehigh Week Two.  Don’t let that record fool you though, Palmerton is certainly much better than their place in the standings.  Last season, Palmerton came from behind to defeat the Panthers 29-28.  Friday’s game is “Youth Night” with Kickoff scheduled for 7 p.m.