Concerns about students using smokeless tobacco products in order to vape or ‘juul’ in Saucon Valley High School bathrooms led school officials to close them off on Tuesday.

JUUL is a brand name of an e-cigarette in which nicotine salts are used.

A number of students and parents complained about the abrupt closure and in a message to Saucon Source one student said Wednesday that five of the seven bathrooms were locked.

Saucon Source has chosen not to name the student because of a request to remain anonymous and due to the sensitive nature of the information that was shared.

The closure “meant that around 737 students were limited to one bathroom in the main building, and one in the connected science wing,” the student said, adding that “chaos ensued” when students were told that the bathroom closures would be permanent.

“Students were being scolded for being late to class or being gone longer than 10 minutes (which is normally classified as cutting class) because they only had one restroom to use,” the student said. “A majority of the students had anxiety about going at all, which is a problem in itself because of how many health issues students have that relate to this issue.”

In an email response to Saucon Source on Wednesday, high school principal Tamara Gary–who was shown the message from the student informant with their name redacted–said high school students were never told the closure of the bathrooms was permanent, and that students should feel comfortable talking to her about their concerns.

Gary, in her email, confirmed that there was a coincidental plumbing problem in one of the bathrooms at the same time as the planned closure was taking place.

“During one lunch period one bathroom had to be closed as maintenance needed to snake a drain,” she said. “This took approximately 40 minutes until it was reopened.”

“I appreciate the emotion and passion of the student, and I encourage students to come to speak with me about any issue,” Gary said. “We are working to improve culture and to build trust in our school community. We can only be successful if we work together and not against each other.”

Gary said the increase in studends vaping and juuling in the bathrooms had created a health and safety issue.

“We were limiting the number of bathrooms for better supervision and monitoring students who are frequently leaving class and in the hallways to improve the situation,” she said. “There were two hallway bathrooms open, as well as the bathrooms in the locker rooms, and nurse’s office.”

Responding to other concerns raised in the message from the student, Gary said attendants were not sitting in bathrooms and bathroom doors had not been removed or would be removed.

Two photos sent to Saucon Source on Wednesday and Thursday by a parent, however, show girls and boys bathroom doors that are propped open.

Saucon Source is honoring a request by this parent to remain anonymous. 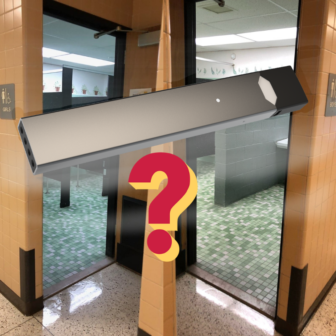 This graphic contains two photos of Saucon Valley High School bathroom doors (one boys room, one girls room) propped open. The parent who shared them with Saucon Source said the bathroom doors have been like this since Friday, Oct. 5, and that it constitutes a privacy issue. Saucon Source has sought comment from high school principal Tamara Gary.

The parent said the doors have been left permanently open since Friday, Oct. 5, and that doing so represents an unacceptable privacy issue, “especially in today’s world.”

“It’s disgusting,” the parent said. “You should not be walking down the hall and be able to see a fellow classmate using the bathroom. It’s wrong.”

As of Friday evening Gary had not responded to a Saucon Source follow-up email sent Thursday morning in which the lack of closed bathroom doors was questioned.

Saucon Source also asked whether the high school adminstration had notified the Lower Saucon Township zoning officer that it would be reducing the number of bathrooms available for student use on Tuesday.

Municipal building codes mandate that a certain number of restrooms be available based upon the number of occupants in a certain building.

In an email that was sent to parents late Thursday, Gary stressed that a recent increase in the use of vaping and JUUL products in the high school bathrooms was behind the temporary closure.

“The number of bathrooms open were limited so that the hall monitors coudl more closely regulate the situation,” she said. “The use of vapes, JUULs and e-cigarettes by teenagers has become a national issue as usage has increased tremendously. It is our hope that the conversation between parents, students, the high school, and community will help to find a way to combat this problem.”

Gary also included in the email links to videos about JUULing which she encouraged parents to watch.

She said that on Wednesday, Oct. 17 from 6 to 7:30 p.m. Caron Treatment Center Student Assistant Program Specialist Alison Odin, M.Ed, “will present a PREP (Prevention Resources and Education for Parents)” program in the high school auditorium.

“She will be discussing many issues to give parents the knowledge and resources to help them understand the issues that teenagers are facing today,” Gary wrote.

The matter of the high school bathrooms was reportedly also discussed by parents who attended a Community Outreach meeting regarding school district safety Wednesday.