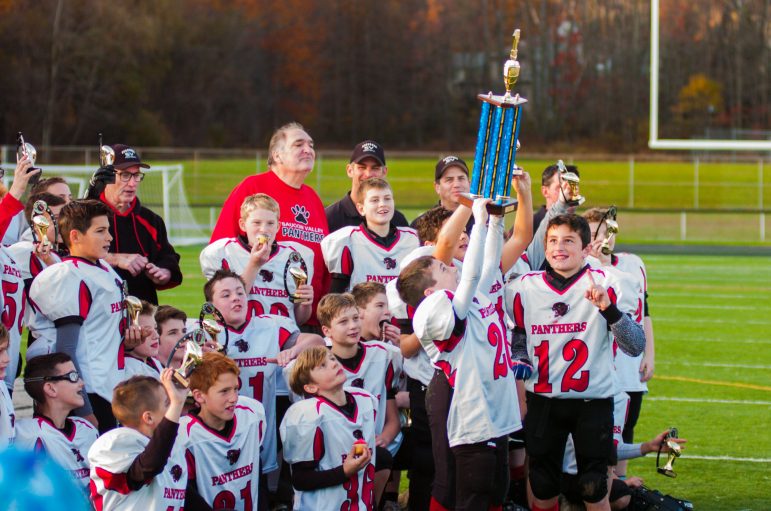 Victory! The Panthers are #1!

It was a beautiful, mild day for football at Northern Lehigh’s Astroturf field as the second-seeded Saucon Valley Panther 120-pound (varsity) team took on the number one-seeded Northwestern Tigers Sunday for their youth football championship.

Talking to the coaches before the game, they were calm and confident. Coach Brown said the Panthers “practiced hard all week and were ready to go.” Coach Schneider simply stated, “It’s a great day to be a champion.” The game started off with both teams feeling each other out. It was almost like a boxing match where the contenders are trying to feel the flow, while trying not to expose themselves too much.

Landon Beckowski–whose postgame quote was “keep trying, don’t ever give up…you can always do anything”–totally stood out on the first defensive series for the Panthers, making 3 out of the first 4 tackles. He really helped set the tone for a very physical game.

Both teams had little offense, while the defenses fought hard to contain them to a 0-0 first quarter tie. In the second quarter the Panther offense started moving the ball on a lengthy drive highlighted by several passing plays, one a creative trick play from Landon Beckowski to Constantine Donahue for 21 yards, and another 8-yard completion to Constantine again from Aiden Grogg. The Panthers finished the drive with a 9-yard rushing touchdown by Donahue and took a 6-0 lead into halftime thanks to Aiden Grogg, who stalled out a Tigers scoring drive late in the half with a red-zone interception.

The Panthers received the kickoff to start the third quarter, and managed another time-consuming drive, but could not find any points and turned it over on downs. The Panther defense continued to stuff the Tigers’ run-and-pass plays and was beginning to frustrate the higher-seeded team as they ended the 3rd quarter with that same 6-0 lead.

The 4th quarter started with the Tigers driving but turning the ball over on downs, where the Panthers took advantage of the opportunity and increased their lead to 14-0, courtesy of a 2-yard rushing touchdown by Landon Beckowski. He then recovered a fumble on the ensuing kickoff, and allowed the offense to run some time off the clock. A panther fumble gave the Tigers the ball with less than 3 minutes left to play. A Tiger comeback seemed improbable but still possible until Jack Robertson ultimately sealed the Panthers’ victory with an interception.

Coach Brown proudly said, “they all played very well, the defense was awesome (as they have been all season, recording six shutouts in 11 games). It wasn’t easy, but everyone grinded it out for the win.”

Congratulations to all the Panther varsity players and the coaches on an amazing undefeated season that culminated with a 14-0 victory in the Colonial League championship game. 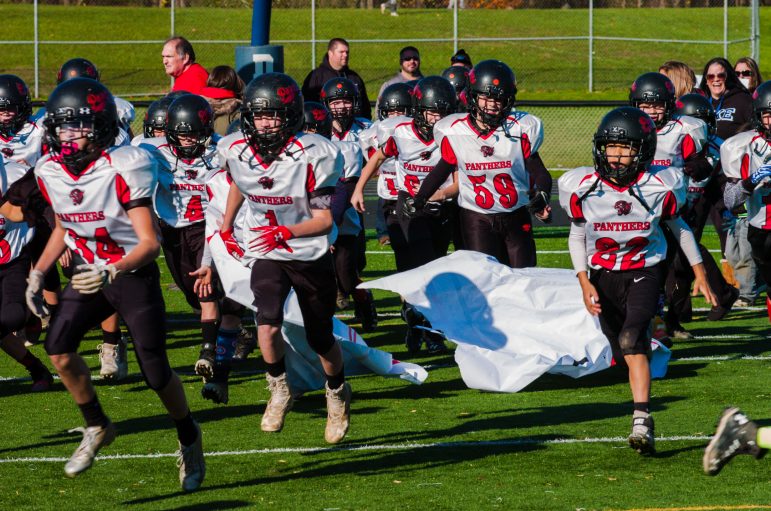 The Panthers charge the field for the Championship game Nov. 4. 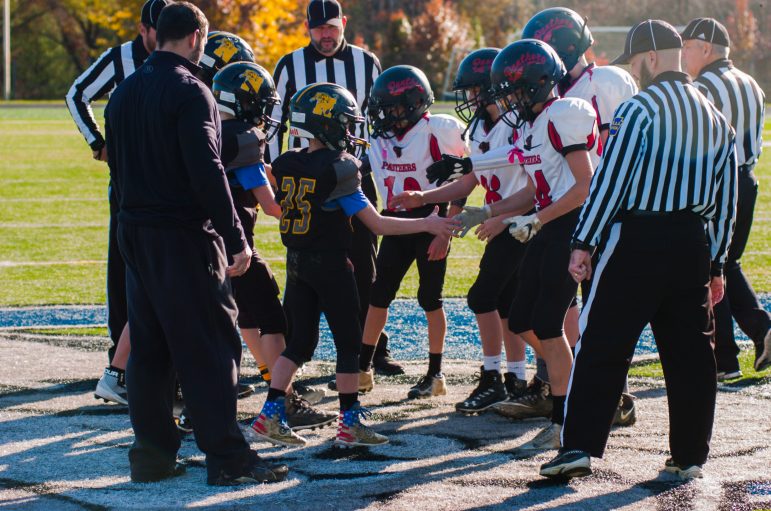 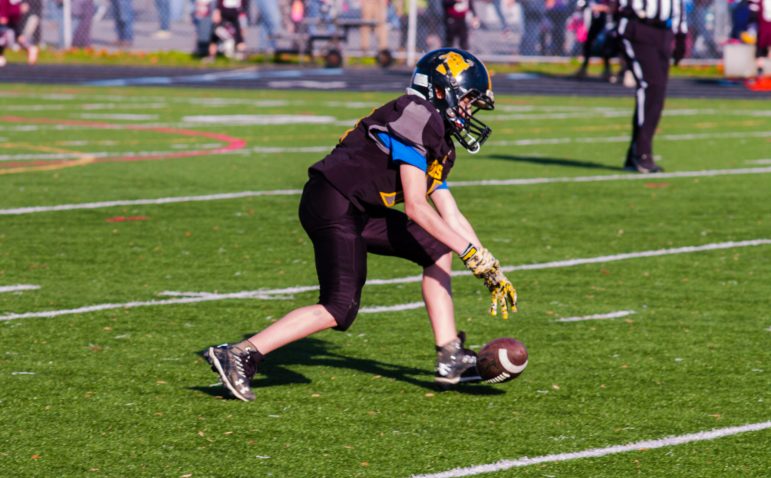 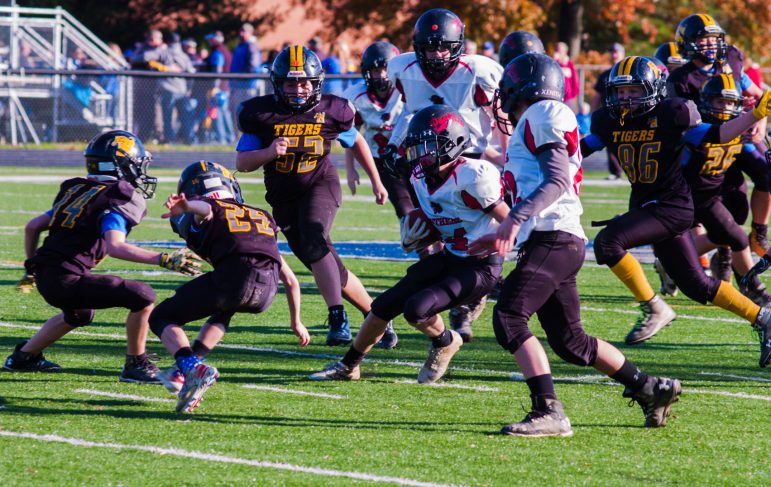 Constantine Donahue turns a pair of defenders inside out with a huge juke move. 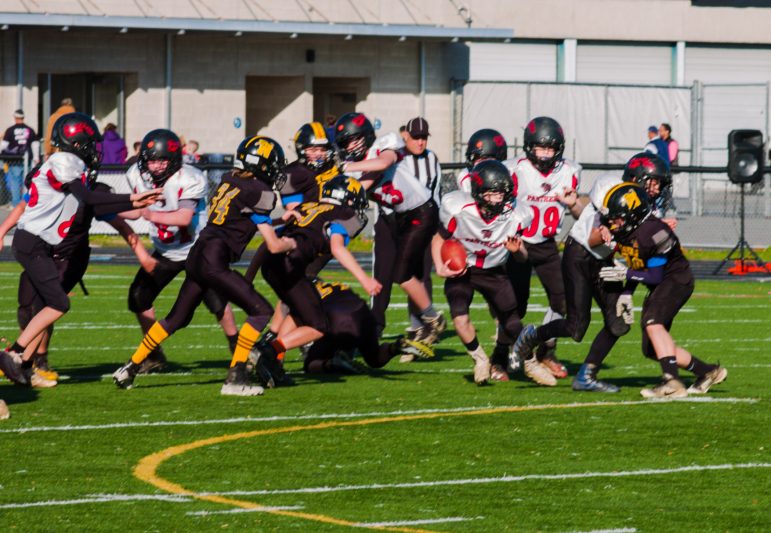 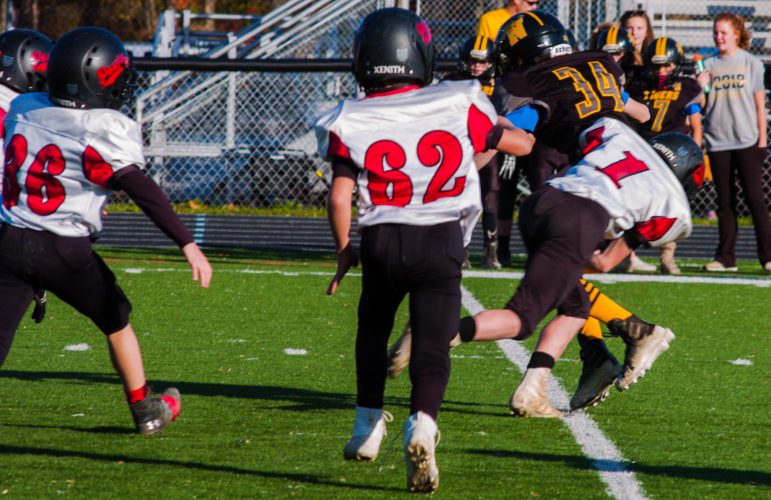 Landon Beckowski punishes a Tiger running back while Jackson Albert (36) and Hector Mateo (62) rush to assist. 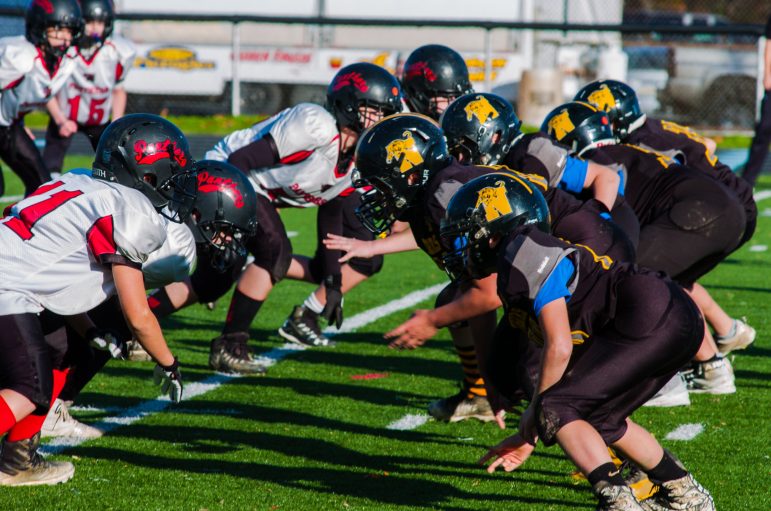 The Panthers’ defensive and Tigers offensive lines prepare to battle at the snap.

Landon Beckowski punishes a Tiger running back while Jackson Albert (#36) and Hector Mateo (#62) rush to assist.

The Panthers’ defensive and Tigers’ offensive lines prepare to battle at the snap. 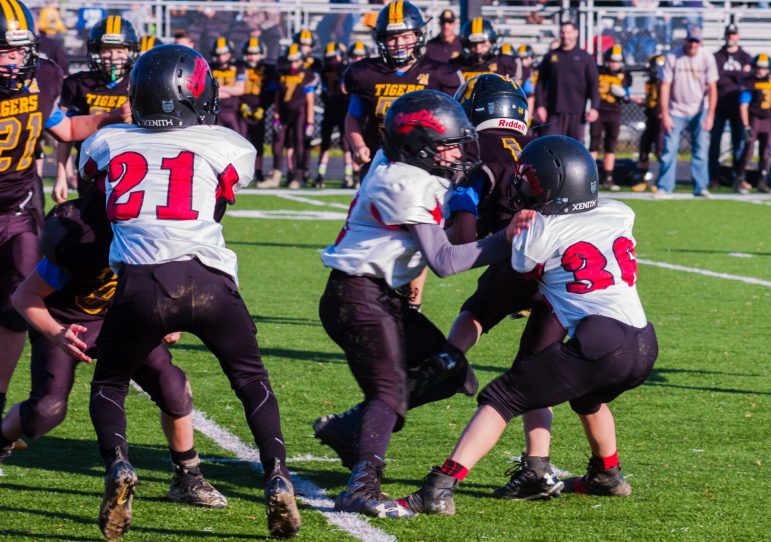 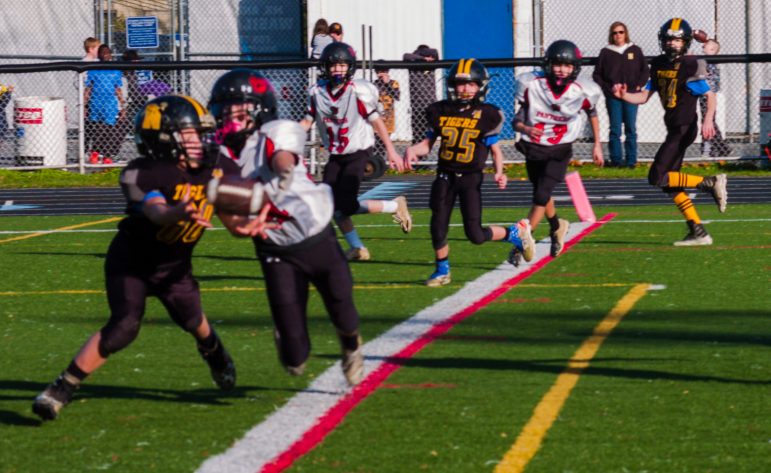 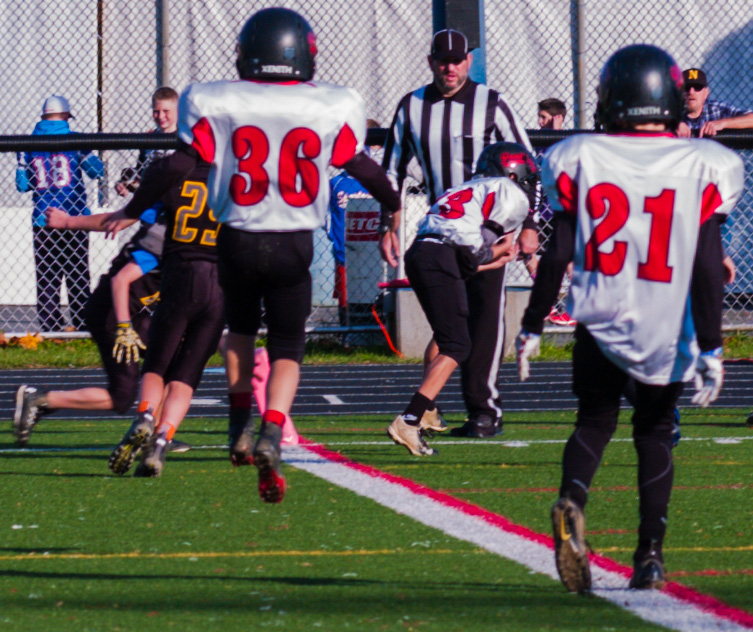 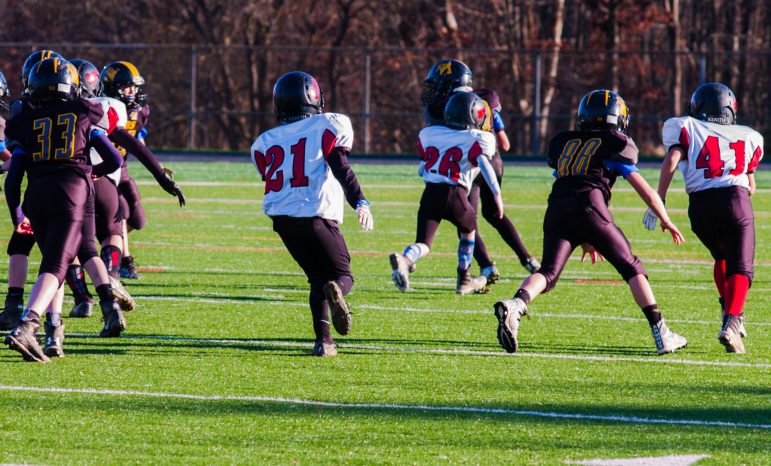 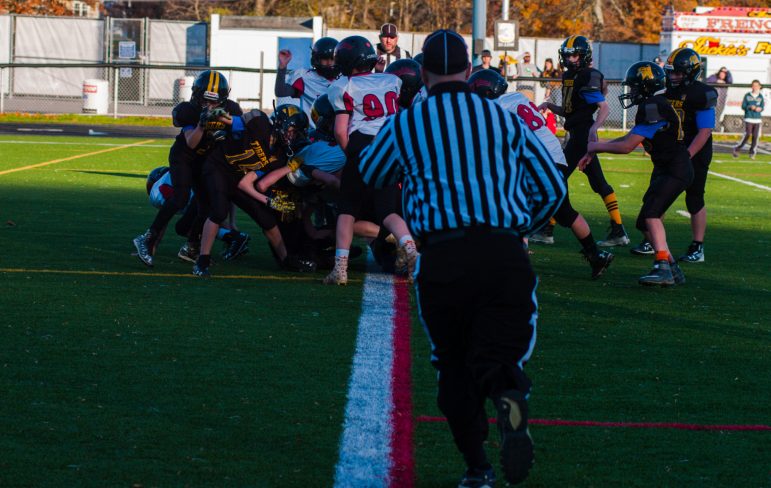 Somewhere in that pile is Landon Beckowski, surging forward for the game-sealing touchdown with the help of his linemen of course. 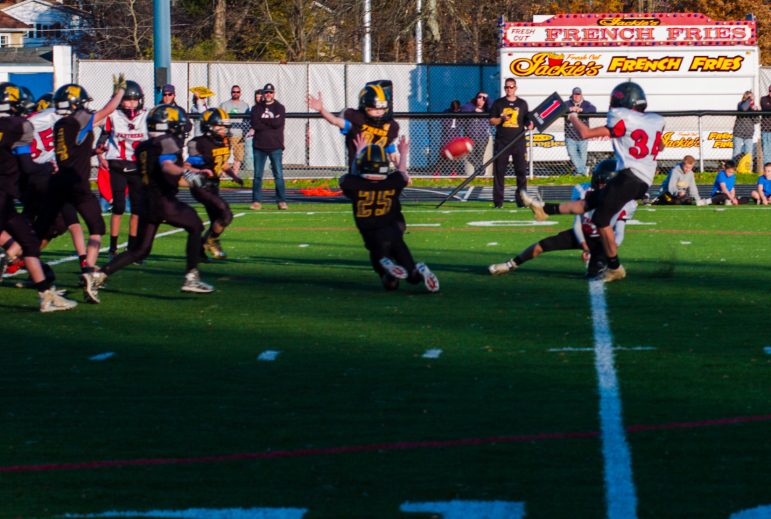 The kick is away, it was good and the Panthers take a 14-0 lead midway through the 4th quarter. 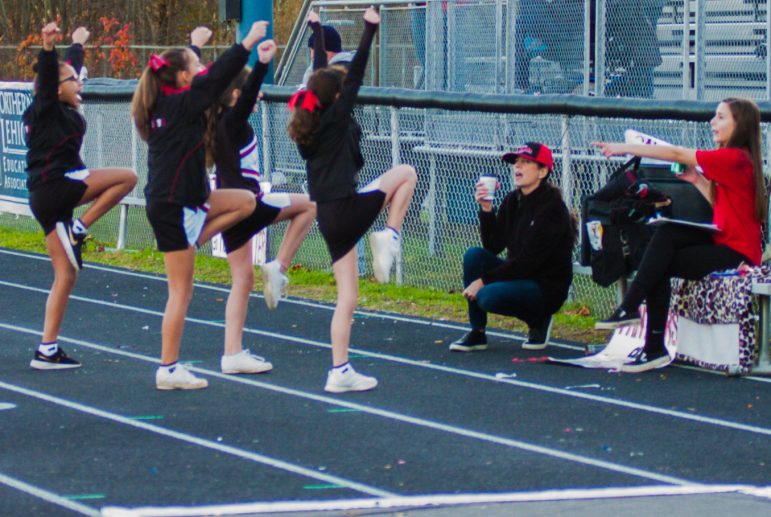 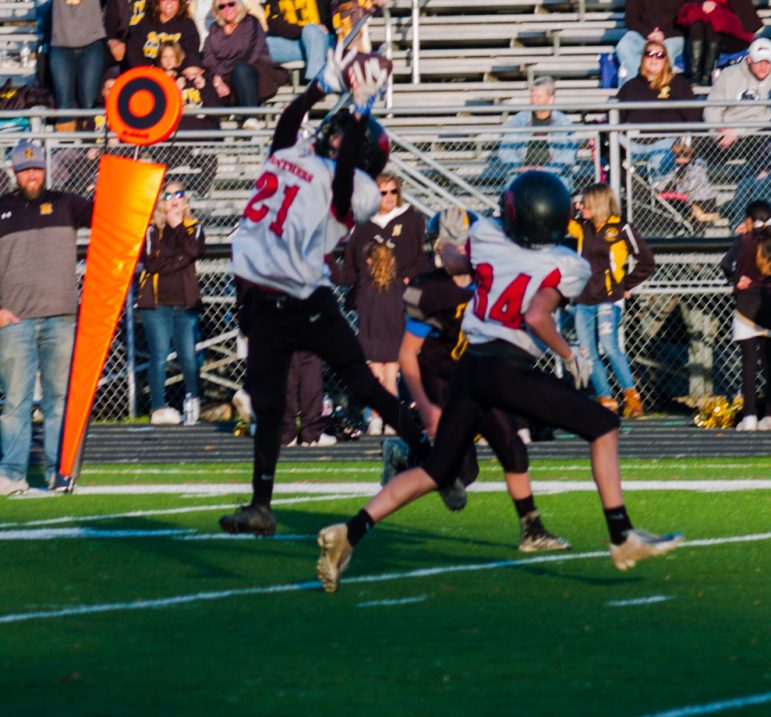 Jack Robertson seals the deal with this leaping interception. 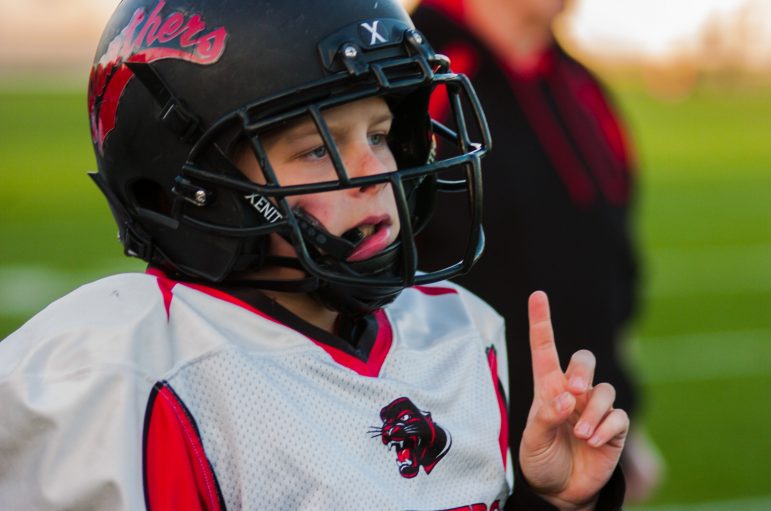 Panthers are going to be #1! 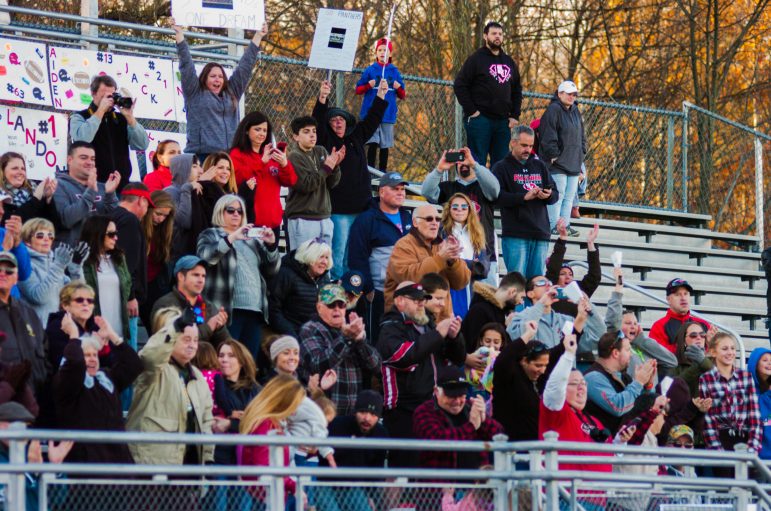 Fans cheer on the Panthers as the moment of victory draws closer. 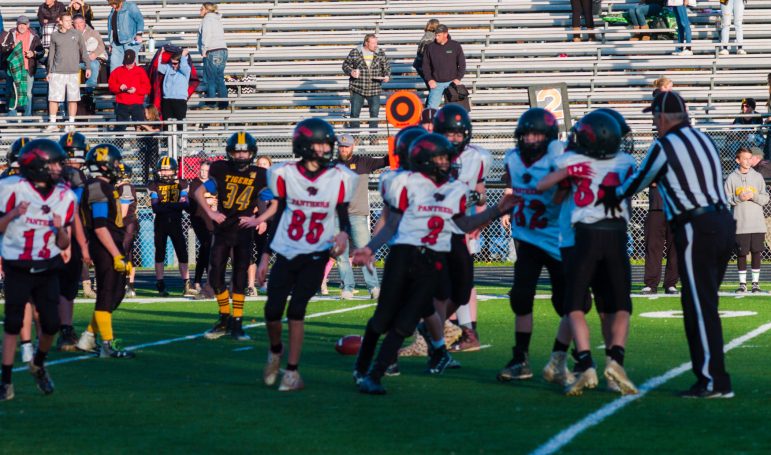 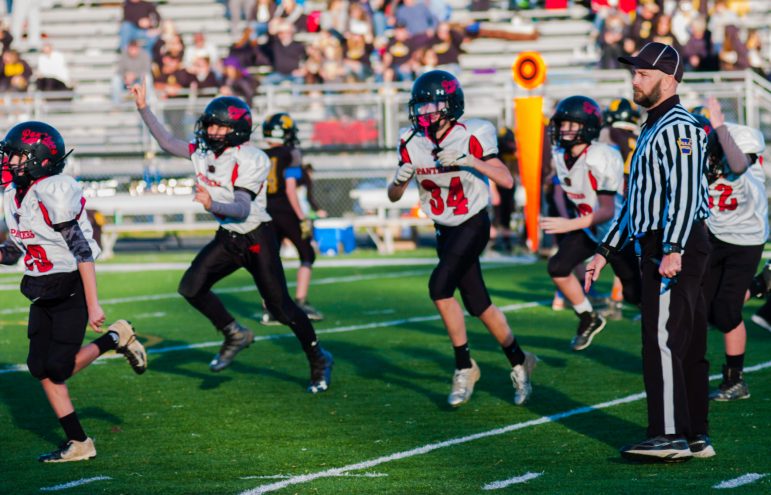 The joyous champions jog off the field. 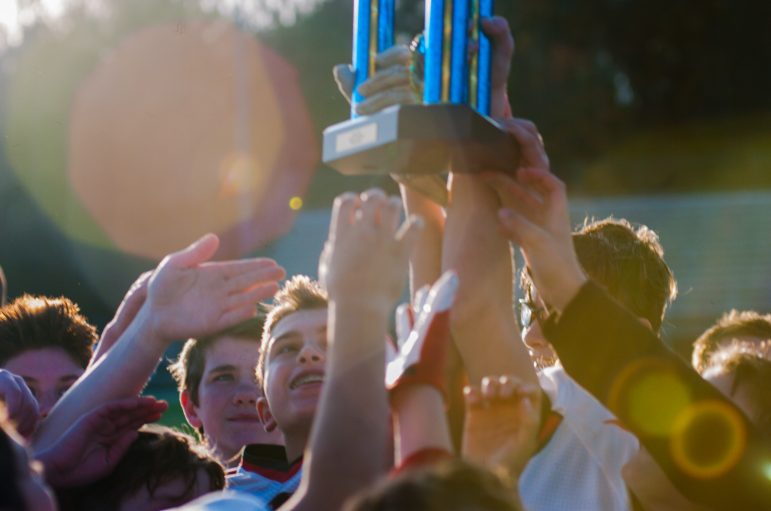 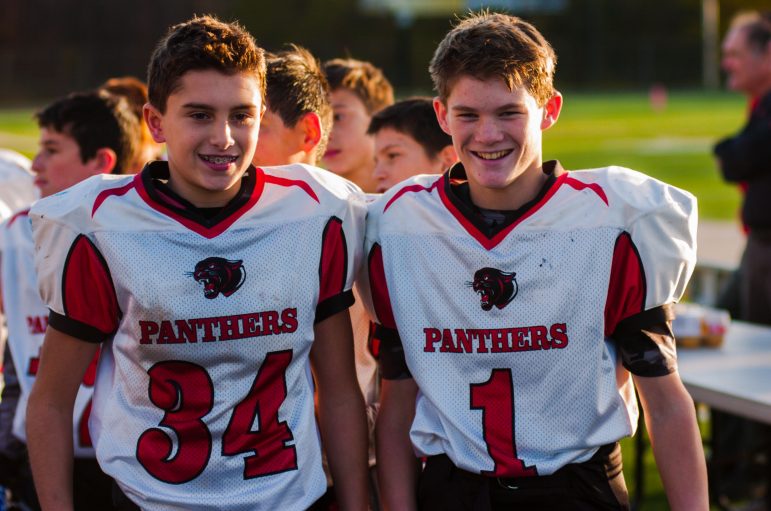