Police say a Bethlehem man was all wet–both literally and figuratively–after a bizarre New Year’s Eve escape attempt that began in Lower Saucon Township and ended along the south bank of the Lehigh River in the city.

According to a WFMZ.com story published Thursday that cites court records, Moises O. Santos, 51, is facing a misdemeanor fleeing and eluding charge after he allegedly jumped into the river following a pursuit that began near Old Philadelphia Pike and Seidersville Road, after a motorist told a Lower Saucon police officer monitoring traffic that Santos had allegedly nearly caused a wreck by passing him in the ‘S’ curves on Seidersville Road.

After identifying the vehicle as a Dodge Dakota and running its license plate, police discovered that Santos had three active arrest warrants and attempted to pull him over on Koehler Drive before he allegedly took off and ran red lights and stop signs before reaching the river, where he was ordered out of the water and taken into custody without further incident, the website reported.

As of Thursday, Santos was incarcerated in Northampton County Prison in lieu of $50,000 straight bail, according to court records.

A preliminary hearing in his case is scheduled to be held Jan. 10 at 9:15 a.m. before District Judge Alan Mege in Lower Saucon Township. 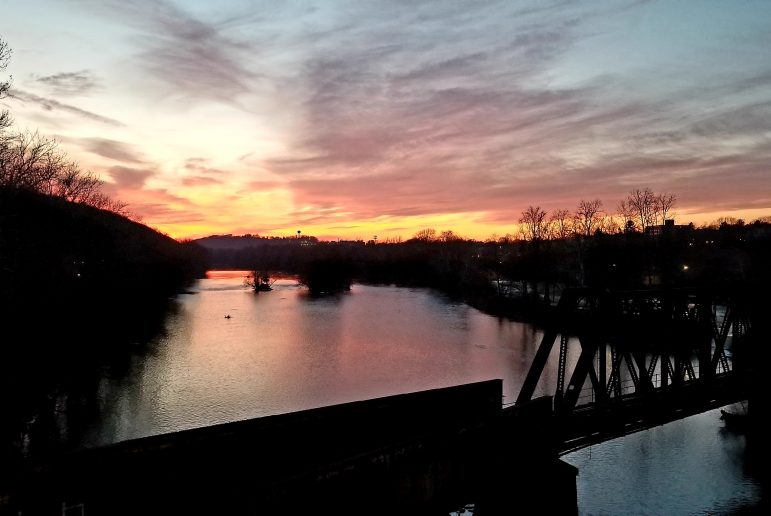 The Lehigh River in Bethlehem is pictured from atop the Hill-to-Hill Bridge, looking west toward Allentown. Riverside Drive, where the Dec. 31 police chase ended, runs along the south bank of the river. (FILE PHOTO)