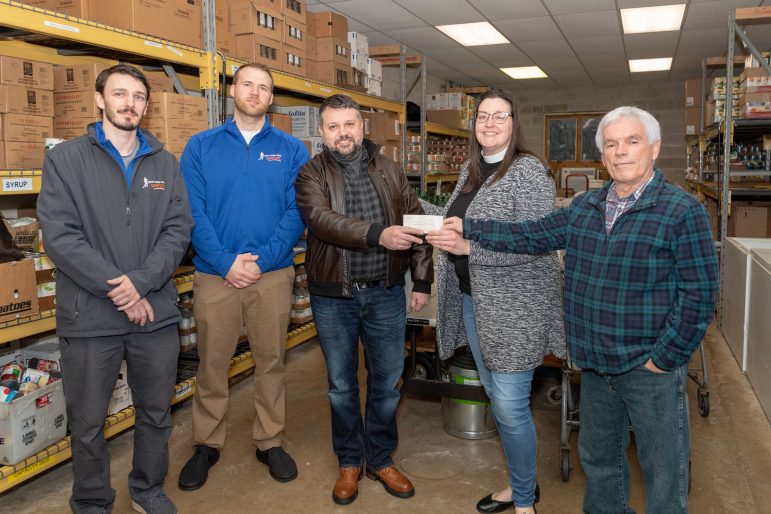 From left, Kenny Boecker and Nate Conrad of Bob’s Valley Wide Carpet Care and Josh Popichak of Saucon Source present a donation for $304 to Pastor Lauren Applegate of New Jerusalem Evangelical Lutheran Church and Manny Aguilar, who manages the food bank at the church. The donation also included funds donated by Heintzelman Funeral Home of Hellertown.

The businesses who donated to Saucon Source’s first “Lights for Food” holiday lights photo fundraiser in December this week delivered separate donations to the two local food banks that were the recipients of the money raised.

Saucon Source publisher Josh Popichak was joined by Nate Conrad and Kenny Boecker of Bob’s Valley Wide Carpet Care of Bethlehem to present checks for just over $300 to both the food bank at Ebenezer New Reformed Church on Bingen Road and the food bank at New Jerusalem Evangelical Lutheran Church on Apples Church Road. Hellertown mayor David Heintzelman of Heintzelman Funeral Home–which also donated toward the campaign–was unable to attend the presentations.

Both food banks are located in Lower Saucon Township, although they have Bethlehem mailing addresses.

The food bank at New Jerusalem is the Community Food Bank for the Hellertown Area Ministerium (HAM) and serves Saucon Valley residents in need on the third and fourth Saturday of each month, manager Manny Aguilar said.

The food bank at the church operates using a “shopping” system on Saturday mornings whereby recipients pick out their own groceries based upon what is available.

In addition to donations from individuals, the food bank is also the recipient of support from the Giant Food Store in the township, he added.

For more information, to arrange a donation or to learn more about volunteering visit the food bank page on the New Jerusalem E.L. Church website or email Tammy Welch at donniesmom180@yahoo.com.

The food bank at Ebenezer New Reformed Church serves local residents and residents from further away, as it’s a designated emergency food bank. 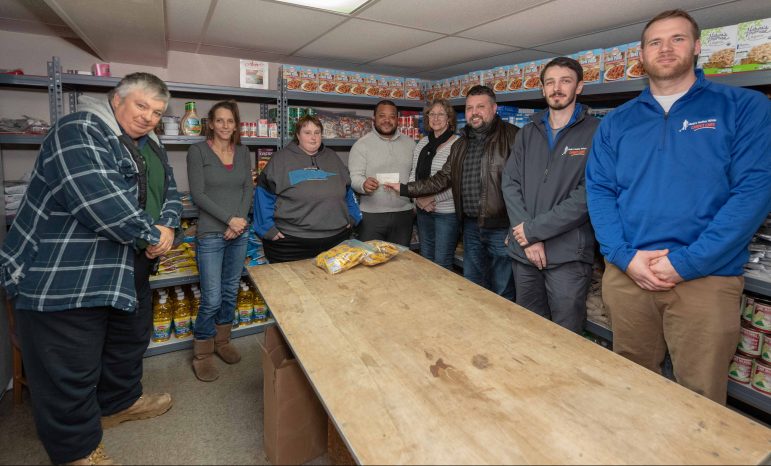 Coordinator Sheila Dieterly explained that the emergency designation means volunteers from Ebenezer are on stand-by to open the food bank to families who’ve lost everything in fires, victims of domestic violence and others who referred to them by state and local agencies on a case by case basis.

The food bank at Ebenezer church is open each Tuesday to anyone in need–no questions are asked, but a valid ID is required–from 6 to 7 p.m., but a core group of volunteers is typically there from early in the morning til late in the evening, packaging and sorting food, accepting donations and taking care of other tasks that are needed to keep the organization running.

Dieterly said donations can usually be dropped off between 11 a.m. and 4 p.m. Because the food bank is located in the church basement and the side door that accesses it is sometimes kept locked, anyone dropping off a donation may need to knock loudly on the door, she pointed out.

Financial support is always needed and the assistance of additional volunteers would be welcome, Dieterly said, noting that she and her father, Mark, have been helping oversee the operation of the food bank for about 20 years now.

What many people don’t realize, she said, is that the food bank must pay a modest fee to Second Harvest Food Bank of Lehigh Valley and Northeast Pennsylvania for the food it receives each week at their distribution center near Bath; fees that up until several years ago were typically covered by grant funding. The cost now passed on to the food bank is five cents a pound, but the bills add up considering how much food they distribute.

She and volunteer Sam Hess estimated that Ebenezer food bank is serving about 50 to 70 families a week, or several hundred people each month, including emergency cases that are referred to them.

Find more information about the food bank at Ebenezer New Reformed Church on Facebook or by visiting their GoFundMe page, where you can also make a donation. 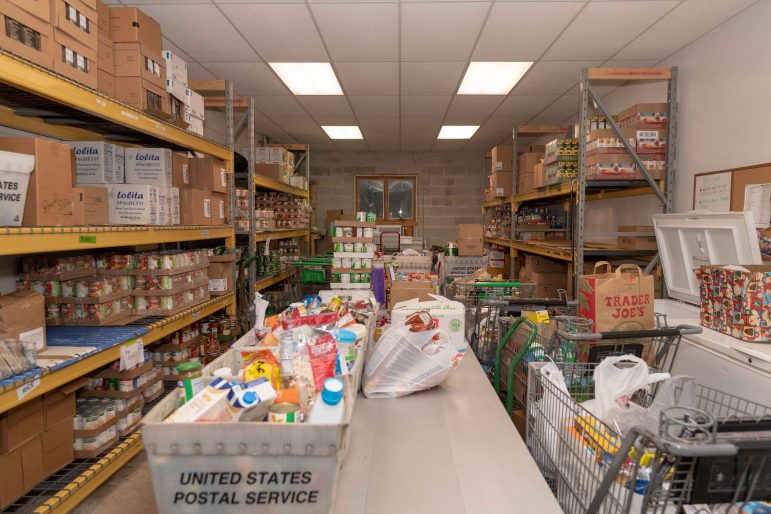