Did you know that Lower Saucon Township has a ghost town of sorts?

Buried in the brush–consumed by the ravages of time–along a remote section of Riverside Drive known as “the Narrows” is the former settlement of Redington, which thrived in the late 19th and early 20th centuries as a miniature center of industry.

A smattering of homes once occupied by those who labored in Redington are the only visual reminder left, unless one looks closely through the trees.

According to information about the former village on the Historical Sites section of the township’s website:

Redington Village was established in 1867 to support the Coleraine Furnace Company, which operated in the last quarter of the 19th century. The owner of the iron company, William T. Carter, began laying out house lots and upwards of 50 houses were built for the company’s iron workers and their families. By 1885, this community had almost 200 inhabitants while the Coleraine Furnace’s work force had surpassed 400. Soon after, there was a need for a general store, a post office, a school and a chapel. Redington Chapel served the members of the community by providing a place to worship, as well as a place for Bible study.

“Today, remains of the iron company and the village are located along the steep slopes of the Lehigh River…with the tracks of the Lehigh Valley Railroad running through, east of the city of Bethlehem,” the site states.

Stone and brick arches are visible across the train tracks from the Narrows as one approaches its intersection with Redington Road East, where the road turns away from the river.

These arches are written about in a 1990 Determination of Eligibility Notification from the National Park Service’s National Register of Historic Places, which states that the Redington Historic District is historically significant enough to be eligible for listing on the register.

Letters and images related to the determination can be viewed here. 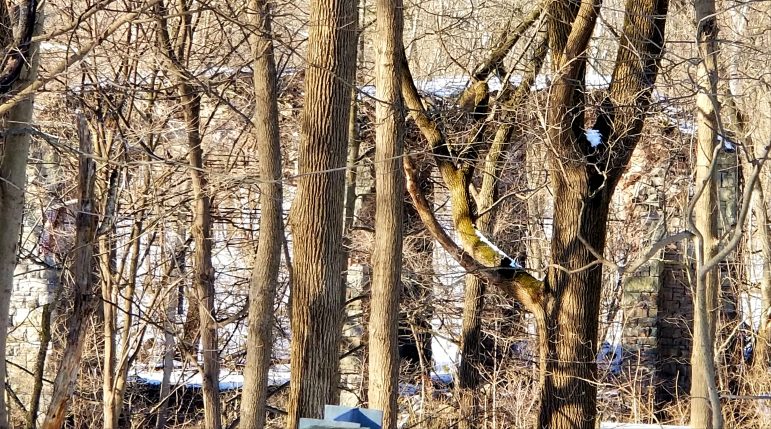 Ruins of the former Coleraine Furnace Company in what was once the village of Redington in Lower Saucon Township. The company produced iron in the late 1800s and was eventually purchased by Bethlehem Steel Company, which operated a proving grounds and then an ordnance plant on the site. Since 1990 the Redington ruins have been eligible for listing on the National Register of Historic Places.

In the late 1800s, the Bethlehem Steel Company purchased the Coleraine Furnace Company and transformed it into an armaments testing area, or “proving grounds.”

During World War I it built an ordnance plant in Redington, where many female workers filled shells that were destined for use in Europe.

After World War I ended armament production also ceased in Redington, and by 1925 the village was largely abandoned, with the exception of some privately-owned worker housing that is still inhabited to this day. The stone arches–remnants of the Coleraine Iron Company–as they appeared circa 1990, when the Redington site was surveyed by the National Park Service for possible inclusion on the National Register of Historic Places. The NPS found that it was eligible, but it was never added to the list.

Another part of the village ultimately became part of the privately-owned Easton Fish and Game Association.

A Greek Revival school and meetinghouse that once stood as a reminder that Redington had once existed was demolished in late 2007 because it had become dilapidated, according to the township website.

“To recognize the significant role the chapel played in the life of Redington Village, the township installed a historic marker at the site on Saturday, Oct. 24, 2009,” it says. 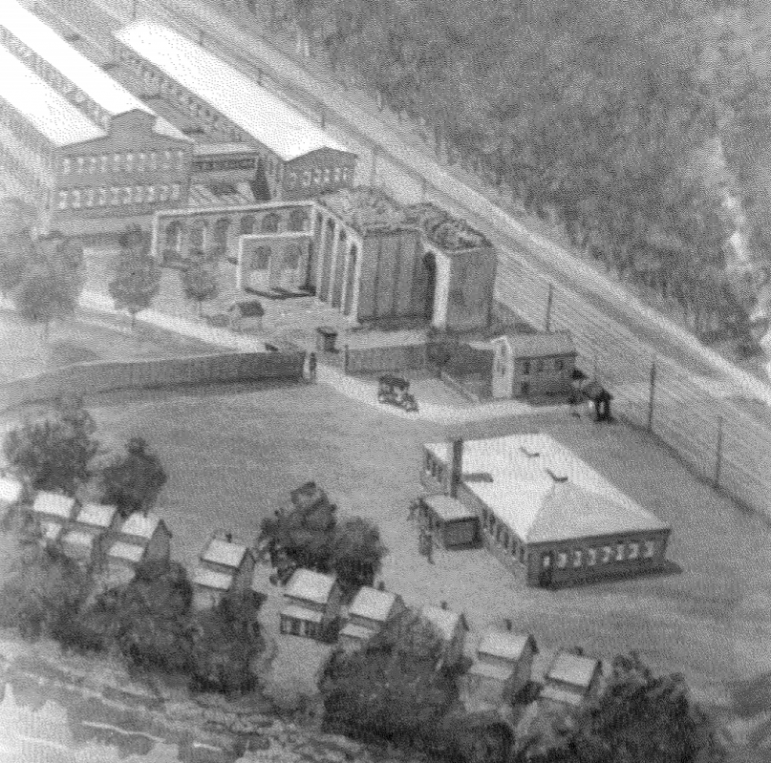 An early 1900s view of Redington village in Lower Saucon Township shows the large stone arches that were integrated into the industrial complex created by Bethlehem Steel after it purchased the Coleraine Iron Company in the 1880s. Worker houses from the Coleraine era lined the south bank of the Lehigh River at the time.