At a meeting Monday, Hellertown Borough Council continued its discussion about purchasing custom “hometown hero” banners to display on light poles in honor of local veterans, and ultimately decided the project should become the work of a committee.

Borough manager Cathy Hartranft said she recently solicited and received quotes for the patriotic banners from Rileigh’s of Allentown.

A 30- by 60-inch banner identical in size to the dark green Hellertown banners that are currently attached to about six utility poles along Main Street would cost $110, she said.

A 24- by 48-inch banner would cost $90, and the hardware needed to mount each banner costs $79, which brings the total cost per set to nearly $200 for the larger of the two sizes, Hartranft said.

There is a minimum order requirement of 10 banners, council was also told.

Production normally takes 30 days, but could take up to 45 days, and the photos that are used to make the banners must be at least 150 DPI, Hartranft told council.

Although there were originally 28 green Hellertown banners hung from approved light poles along Main Street, a recent survey indicated that only about six of them remain. 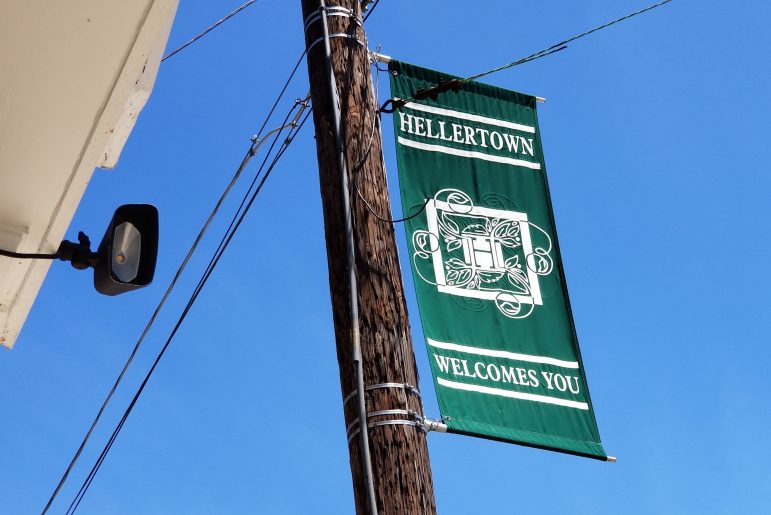 The hometown hero banners Hellertown is considering would likely be similar in size to these green banners which currently hang from about six PPL poles on Main Street.

That means 22 PPL poles are potentially available for adoption, in addition to borough-owned light posts in parks and on public property.

Rather than rushing to try and develop a hometown hero banner program in order to get them printed and hung this summer and fall, council president Tom Rieger suggested that council make next summer its target timeline for rolling out the hometown hero banner initiative.

Doing so will allow for the creation of a committee that in addition to borough representatives should also include community members and representatives of Hellertown’s Edward H. Ackerman American Legion Post 397, council decided by a vote of 6-0.

The next borough council meeting will be held Monday, June 17 at 7 p.m. at Borough Hall, 685 Main St., Hellertown.

Meetings are open to the public and draft meeting agendas are published on the borough’s website in advance of each meeting.