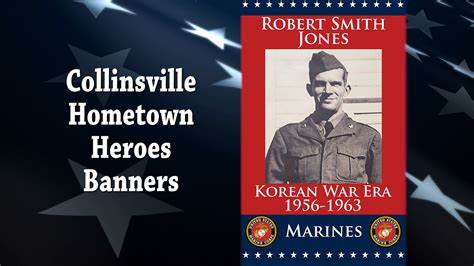 An example of a hometown hero banner from Collinsville, Ill., which has a banner program.

What are “hometown hero” banners?

You may have seen them in other communities. Simply put, they are patriotic banners that recognize U.S. veterans–both living and deceased–from those communities.

Typically they are hung from light poles. In many cases, they are sponsored by friends, family members or businesses. And now, Hellertown officials are going to see whether they can become a new way to honor the service of local men and women.

The matter of the hometown hero banners was discussed at Monday’s borough council meeting, where council president Tom Rieger said a resident recently asked about whether the flags could be hung along major roads such as Main Street and Easton Road.

Rieger said the flags can currently be found in several communities in the northern Lehigh Valley area, such as Palmerton, but they can also be found in many communities throughout the United States, such as Collinsville, Ill.

More information about that program can be found on the City of Collinsville website.

Rieger asked borough manager Cathy Hartranft to obtain more information about the banners, and to report back to council with it.

At the meeting, Mayor David Heintzelman commented on how good the borough is looking this spring.

He said the CEO of a large local company–who he did not identify by name–recently drove through town and remarked, “I can’t believe how beautiful it is.”

“We have a lot to be proud of,” Heintzelman said.

He added that he had attended a soft opening for Lost Tavern Brewing’s new taproom at the Moravian Bookshop in downtown Bethlehem Monday and called it “impressive.”

He said the owners of Lost Tavern made an effort to work with other local businesses in developing the new taproom, and mentioned that Solid Rock Concrete Design on Durham Street in Hellertown was one of them.

Recently the owners of Lost Tavern Brewing also announced plans to expand their operations with the acquisition of a nearby building, where they plan to eventually offer tours and sell beer as well as branded merchandise.

The next borough council meeting will be held Monday, June 3 at 7 p.m. at Borough Hall.