Saucon Valley School District is known for having a tremendous pool of athletic talent, and the recognition of its students advancing to four-year colleges is always noteworthy. However, there are many Saucon students who move into a trade after high school, and the prospects in life for these students are equally as promising. Lower Saucon Township resident and future international cooking competition participant Thomas “Tommy” Traupman, 19, is a case in point. 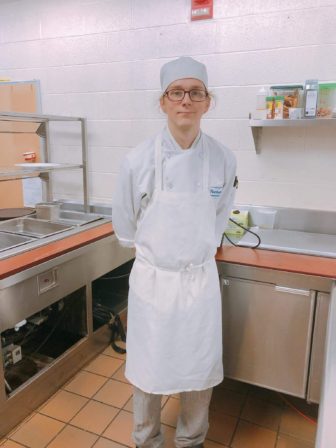 At vo-tech Tommy met chef/instructor Dario Chavez, who helped further develop in him a desire to cook for a living. That ultimately led him to enroll in the culinary program at Northampton Community College (NCC) after graduating from Saucon Valley in 2018.

“My parents have always been my biggest supporters, going to open houses during vocational school and dining in the restaurant at NCC,” Tommy said.

He also credited his guidance counselor and Chavez for helping to motivate him.

“Mr. Geiger helped me figure out if vo-tech was a good choice for me, which it was,” he said. “At vo-tech Chef Chavez gave me my first experience in the field. Being introduced to different kitchens and different events assured me this is what I wanted to do.”

“At NCC I’ve learned a lot and feel I’ve built a strong foundation from the chefs, along with the amazing opportunities they provide,” he added.

As he neared the end of his first year of studies, Tommy, as most culinary students do, looked for an internship. He had hoped to work in a kitchen in New Orleans, but was excited to find out that instead of the Big Easy he’d been chosen to compete along with fellow NCC culinary student Matthew “Matt” Kirby on the other side of the world in the Ningbo International Young Chefs Challenge.

“Originally working towards the New Orleans internship and finding out I could compete in China is a huge step for me, and is something I would’ve never imagined doing,” Tommy said.

The competition will take place Oct. 24-26 in the coastal city of Ningbo, which is located in the Haishu District of China’s Zhejiang province. Ningbo is located on the East China Sea and is one of China’s oldest cities, with a history dating back to 4,800 BC. 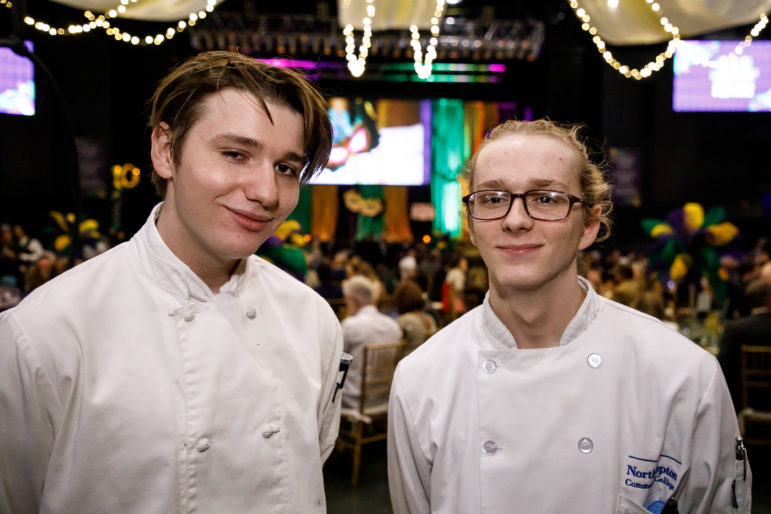 Northampton Community College culinary arts students Matthew “Matt” Kirby, left, and Thomas “Tommy” Traupman will participate in an international cooking competition in Ningbo, China in October. Traupman is from Lower Saucon Township. They are pictured at the 10th anniversary sponsorship dinner for the Lehigh Valley Food & Wine Festival at Sands Bethlehem Event Center in June. There they helped Chef Emeril Lagasse prepare his gourmet dinner for the evening.

Tommy will be competing with Matt for the hot food competition only in the two to tango team section. They will work together to submit three portions of cold or warm seafood appetizers and three portions of beef, chicken, duck, pork or lamb in a Western-style appetizers format, all within an hour of cooking time.

The two students will then compete separately in the farm to plate and Ningbo seafood sections. Matt will take on the Farm to Plate section and Tommy will compete in seafood, where he’ll prepare a salmon recipe. Both of the dishes must be prepared as a main course serving for two people and presented with a Western-style plating within an hour.

“One of the biggest challenges is figuring out what is and isn’t available while we’re there,” Tommy said. “Some ingredients we can bring with and others we’ll have to shop for. The next challenge will be timing. Once we have our dishes down, we have to kick it up and get it done in one hour. ”

A team of international judges will grade the results, which will be prepared with ingredients from the farmers market in Ningbo; something perhaps akin to our own Saucon Valley Farmers’ Market.

Both students are under the guidance of NCC culinary director Chef Francine Marz, who will accompany them on the trip. They will be the only American team competing at Ningbo, where they’ll be up against 15 other international teams and a number of Chinese teams. They are both now honing their dishes and have been working together since May.

Upon returning from his trip to China, Tommy has already been asked by his former vo-tech teacher Chavez to speak to the current class of vo-tech culinary students about his experience, in order to encourage them to strive for their goals. In so doing, he’ll be giving back to the school that just two years ago motivated him to follow his own dream.

About the Author: Hellertown resident Joel Wasel is a culinary school graduate and the owner of Wasel’s Omelets at the Saucon Valley Farmers’ Market. He is also the father of Logan, an aspiring student chef. Having worked in the food industry for 25 years Joel’s heroes are David Chang, Anthony Bourdain and Jose Andres. “I have witnessed firsthand the talent and hard work it takes to succeed and that certain quality of fearlessness–borderline insanity–that drives one to become a professional cook,” he says. “Therefore, after hearing about how Tommy was recently accepted to compete as a young chef in China, I felt the need to write about it.”