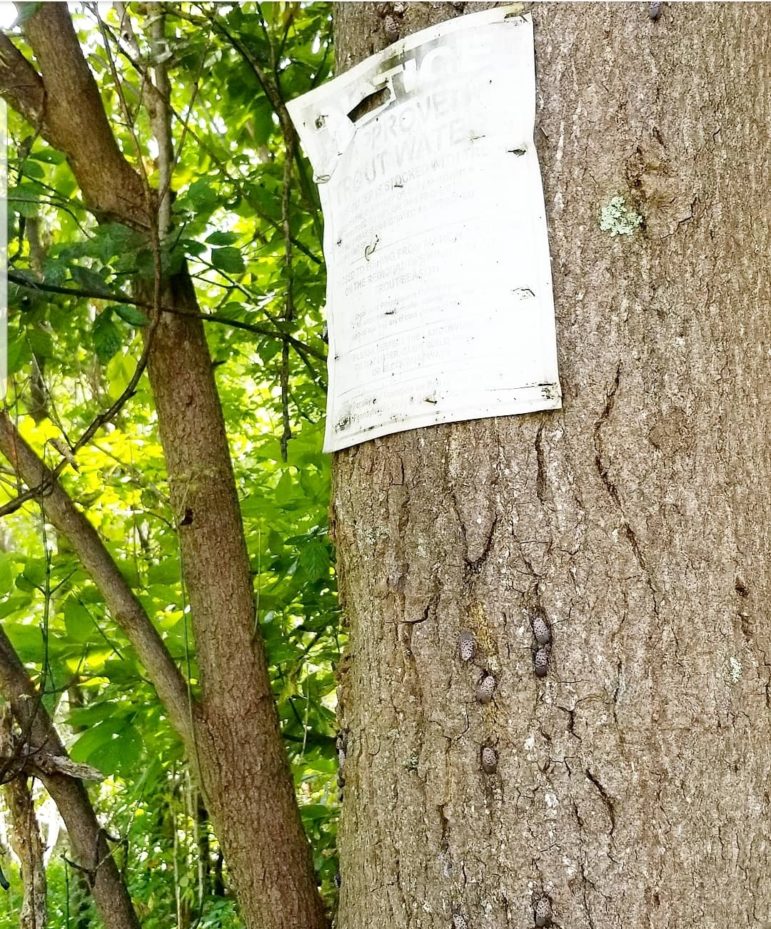 Spotted lanternflies cling to a tree near the entrance to the Thomas Iron Works site along the Saucon Creek in Hellertown, just north of Water Street Park. The area is thickly forested with the invasive tree of heaven that’s a favorite of the lanternfly.

They’re the talk of the town, and not in a good way.

As the summer of 2019 has heated up, so has the population of spotted lanternflies multiplied in the borough of Hellertown, borough manager Cathy Hartranft confirmed at Monday night’s borough council meeting.

The invasive insect species first arrived in Berks County in 2014, and since then it has spread its wings in order to colonize other areas such as the Lehigh Valley, which is part of a state-established quarantine zone in which it poses a significant threat to agriculture.

The insects are also affecting the quality of life of residents in Hellertown and elsewhere, particularly outside in yards, parks and other spaces such as the Saucon Rail Trail, where they can sometimes be seen massing on tree trunks.

Hartranft said officials from the U.S. Department of Agriculture and the Penn State Extension who were recently in Hellertown to survey for the bothersome bugs confirmed that two of the largest pieces of public open space in the borough–the Thomas Iron Works property and Water Street Park–are now “infested” with spotted lanternflies. 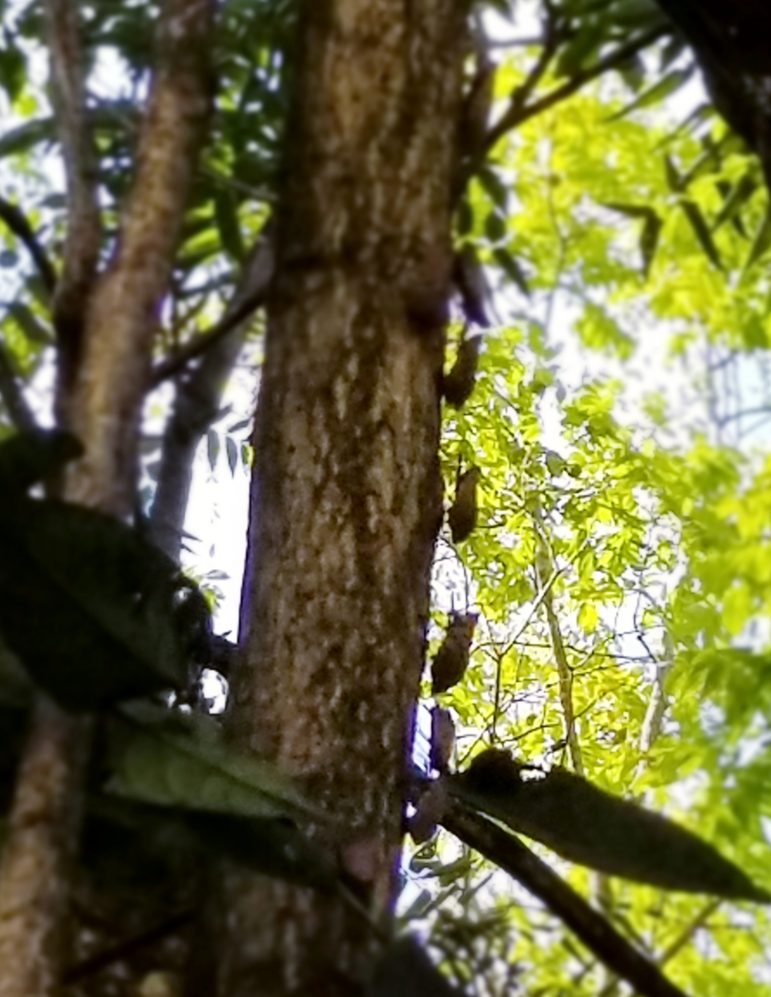 Spotted lanternflies lined up along the edge of a tree trunk are silhouetted against the sunlight near the Saucon Creek in the woods north of Water Street Park in Hellertown borough Tuesday.

Saucon Source visited both sites Tuesday, and hundreds if not thousands of them were easy to spot on trees on the north side of Water Street Park, near where the Thomas Iron Works (or “Cinder Banks”) property begins. Not coincidentally, that area is heavily overgrown with the invasive tree of heaven, which state officials say is fueling the explosion in the equally invasive spotted lanternfly population.

Hartranft said the results of pesticides on the insects so far have been mixed. In some cases, the sprays have caused damage to trees, she told council.

That is why the state is recommending that residents simply squash them whenever they can. 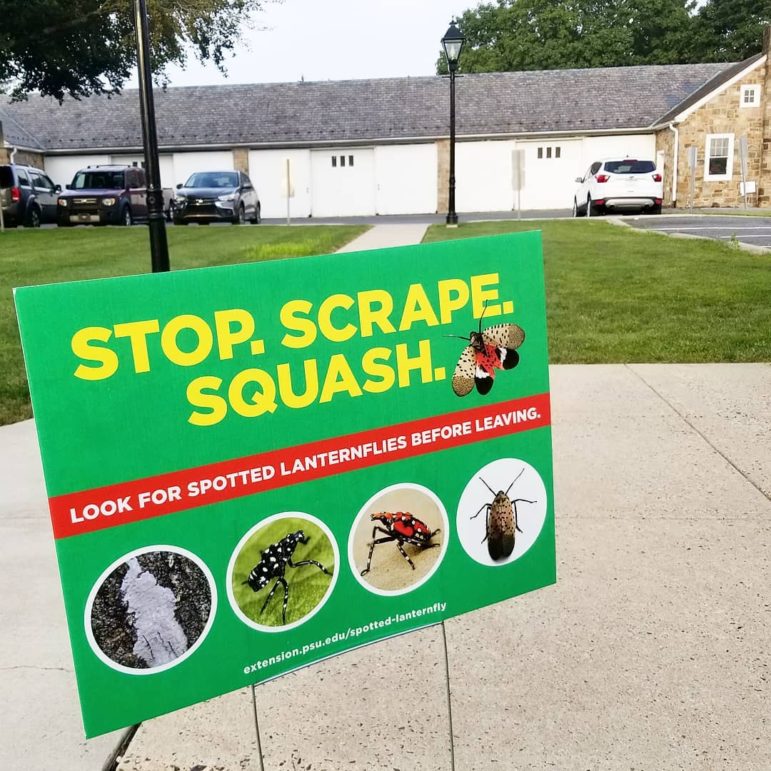 This sign produced by the Penn State Extension is located outside Hellertown Borough Hall. It is part of the Extension’s ongoing effort to educate the public about the spotted lanternfly, which poses a significant economic threat to Pennsylvania.

A colorful yard sign produced by the Penn State Extension which can be seen outside Hellertown Borough Hall instructs passers-by to “Stop. Scrape. Squash” the bugs. It also bears a reminder to “look for spotted lanternflies before leaving,” since vehicles are a major means by which they are able to invade new places.

Much more information along with a form residents can use to report a spotted lanternfly sighting to state agricultural officials can be found on the Extension’s website.

Although there is much discussion about how to deal with them on social media, the Extension advises against using home remedies to combat the spotted lanternfly.

“The best thing any property owner can do is become informed about spotted lanternflies,” is the Extension’s answer to the commonly asked question “Can I prevent spotted lanternflies from getting on my property?” on the website. “By becoming informed, property owners can choose to remove and/or treat the Ailanthus (tree of heaven) trees on their properties, which attract the insects. In addition, property owners can reference our Spotted Lanternfly Management for Homeowners guide for using contact pesticides and treatments on a variety of trees and plants.”

Within that guide is a list of insecticides and other products that have been found to work on the spotted lanternfly, as well as information about how to apply them.

Tell Us: Are you seeing spotted lanternflies in your yard or somewhere else? What are you doing to remove them, if anything? Tell us what your experience with the spotted lanternfly has been like. 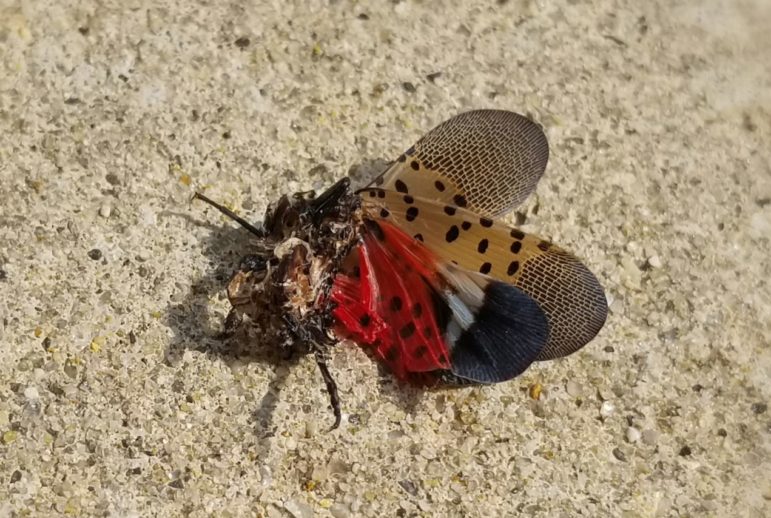 Buddhists may not approve of the recommendation, but squashing spotted lanternflies is what the state wants residents to do, first and foremost. This smooshed lanternfly was spotted on a Main Street sidewalk in Hellertown in mid-August. 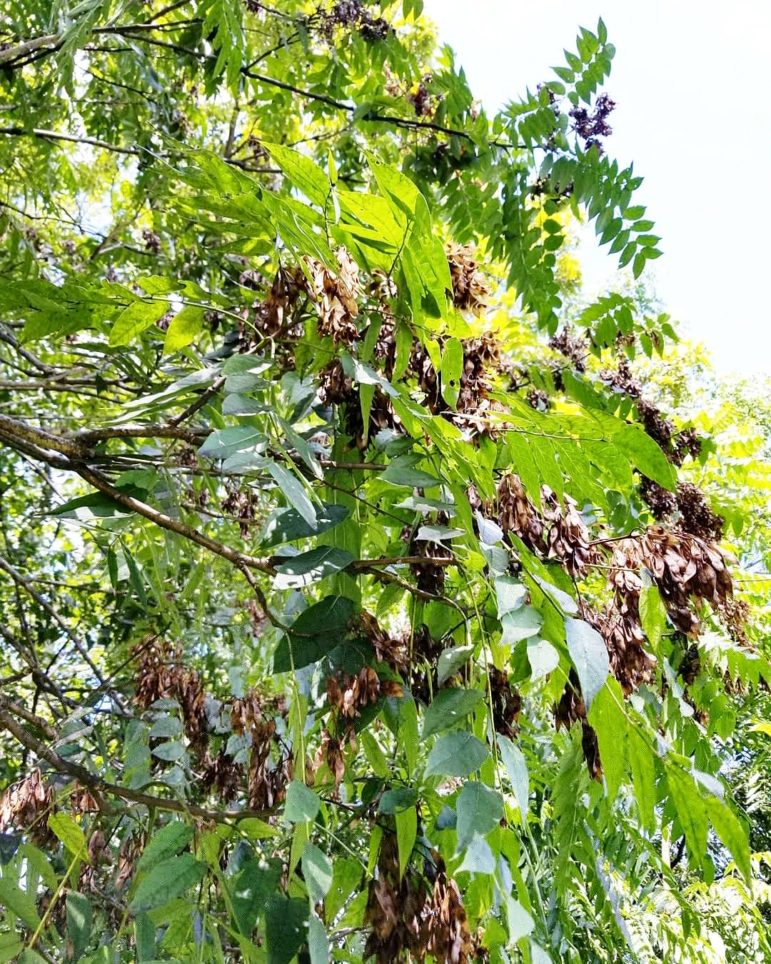 The invasive tree of heaven is identifiable by its leaf structure and hanging seed pods. The fast-growing species is fueling an explosion in the spotted lanternfly population in parts of Pennsylvania. These trees are located near the Saucon Creek in Hellertown borough, just north of Water Street Park. 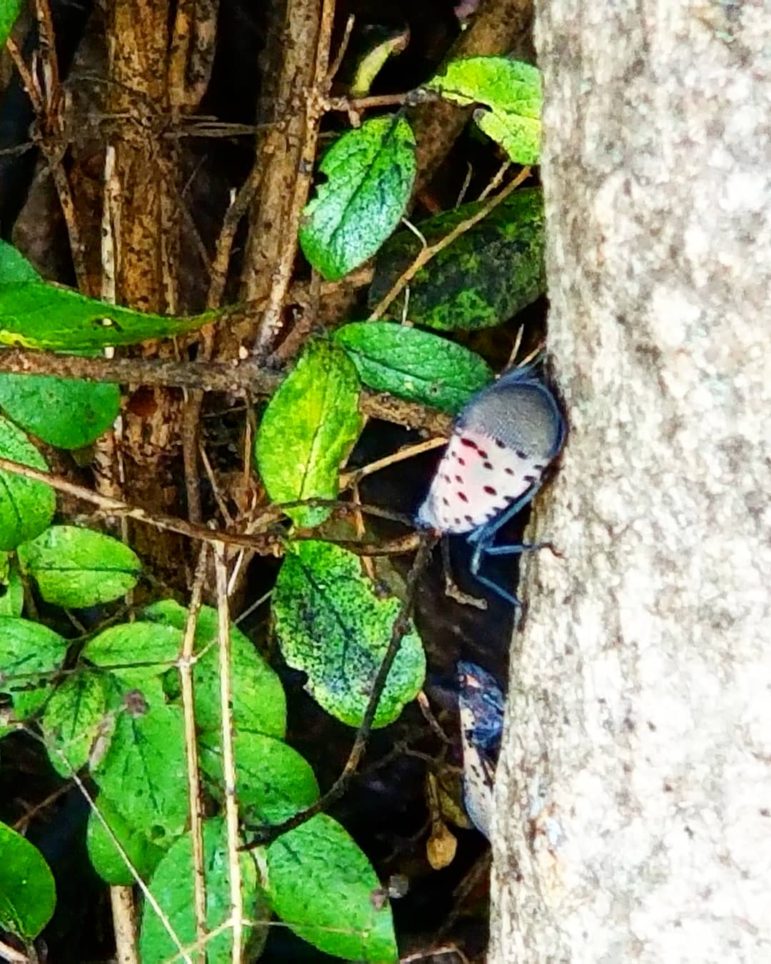 An adult spotted lanternfly on a tree trunk in a wooded area just north of Water Street Park in Hellertown borough. 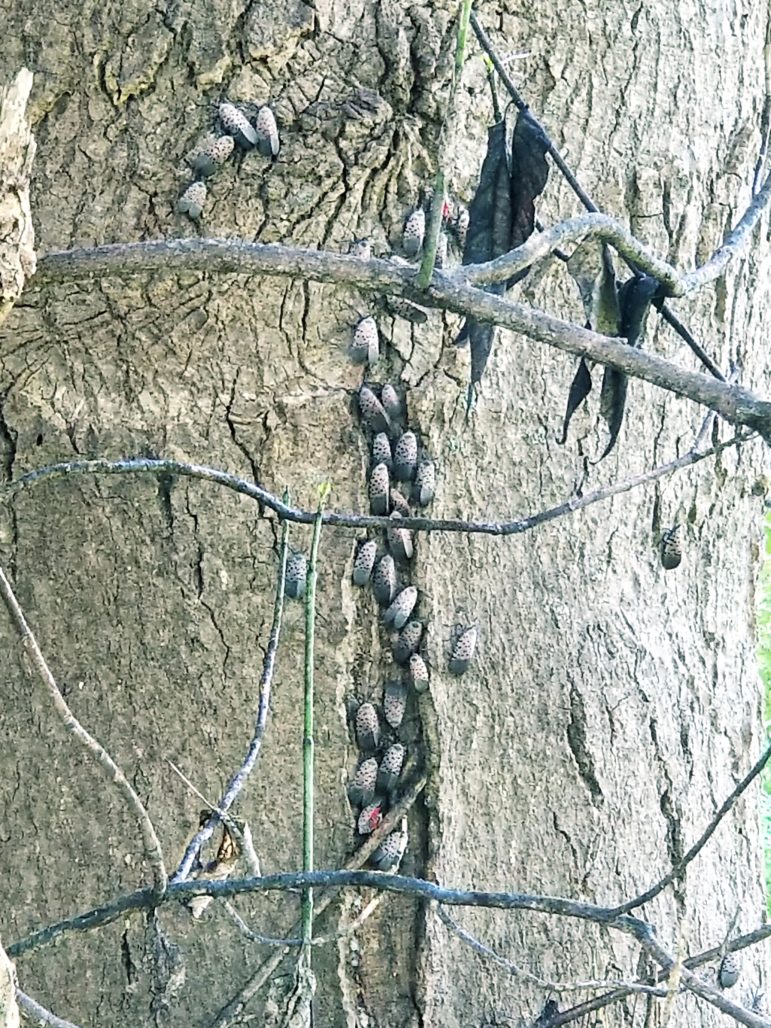 Lanternflies massed in a cluster on a large tree trunk just north of Water Street Park in Hellertown borough. That area has become heavily overgrown with the invasive tree of heaven.