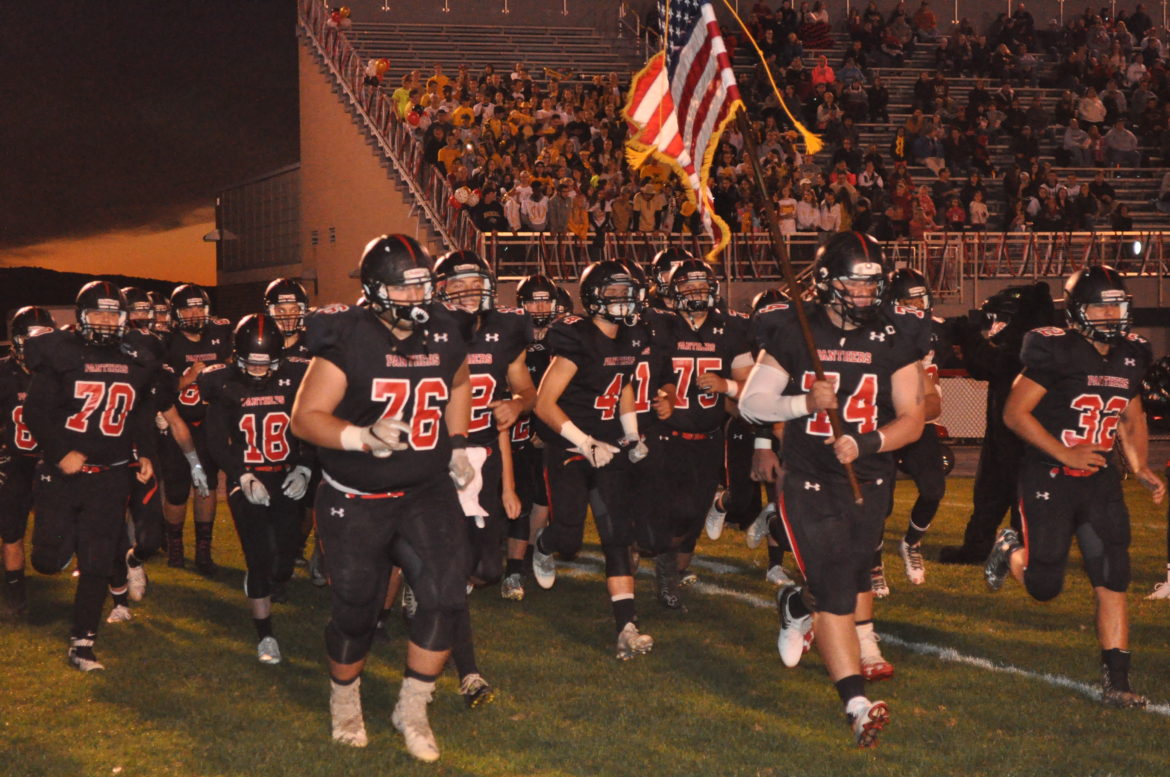 The Panthers will take the field in their 2019 Homecoming game against the Bangor Slaters.

The Friday night, Homecoming lights will be burning bright in Saucon Valley as the Panthers (4-1), will play host to the Bangor Slaters (2-3).  After last week’s thrilling victory over Northern Lehigh, Saucon is expecting a four-quarter slugfest against the Slaters.  Bangor has fallen to Notre Dame (3-2), Southern Lehigh (5-0) and Northwestern Lehigh (4-1).  The Slaters claim wins over Catasauqua (0-5) and Northern Lehigh (3-2).  Last year, the Panthers spoiled Bangor’s Homecoming festivities in a mercy-rule blowout.  What does this year have in store?

Bangor’s defense is multiple, but it is likely that they will bounce back and forth between a 5-2 and a 4-3. On the back end they will play with two or three deep defenders.  They will also match up and play man-to-man on the Saucon Valley receivers. The Slaters don’t appear to blitz with too much frequency, but have shown they will use their quickness to pinch and stunt their defensive front.  Whatever scheme that Bangor concocts, it will be no easy task to stop a Panther running game that currently averages almost 300 yards per contest.

The Panther ground attack is led by sophomore Damian Garcia. Garcia (#30), who measures 5’10”, 165, averages almost 10 yards per carry and 154 yards per game. Garcia is closing in on 1,000 yards having run 80 times for 772 yards so far this season. Garcia has scored 6 touchdowns. Three of his TD’s are from 50 yards out or more including one from 86 yards out.

Fullback Chris Mann (#28) and quarterback Dante Mahaffey have also proven to be an offensive weapons for the Panthers. Mann is a junior and averages 10 yards per try and Mahaffey, a sophomore, has rushed 44 times and scored six touchdowns on the ground.

Mahaffey (#12) calls the signals and leads the Panther offensive attack.  He is dual threat and in his short career has thrown for 1,172 yards and rushed for over 500 yards. Mahaffey already has 26 career TD’s connected to his name.

When Mahaffey drops back to throw this week, the ball will likely end up with Ty Csencsits (#11) or Anthony Orlemann (#9) on the other end. Orlemann and Csencsits are sophomores who have excellent hands.  Last week against Northern Lehigh Mahaffey and Csencsits hooked up three times for 93 yards and a touchdown.

Paving the way for the Saucon Valley ground attack are the 2019 Hogs. Seniors Nick Warnke (#77) and Evan Deily (#65) are the top hogs.  Joining the seniors will be three-year starter David Osman (#60), Eli Deily (#76) and Cody Swinney (#56). Deily and Osman are juniors, Swinney is a sophomore.  These powerful Panther are having a rock-solid season so far.

When the Slaters have the ball…..

The Slater offense has attempted to throw 73 times this season and attempted to run a total of 152 times. The stat sheet shows that they are in the neighborhood of 650 passing yards and 400 rushing yards for their productivity. They show a multiple-look offense and, like the Panthers, mix it up between I-formation and spread sets.  Bangor averages 16 points per contest and just over 210 yards of total offense per game. Not great numbers, but they are better than what the numbers may indicate.

It will be interesting to see who lines up behind center for the Slaters.  Early on, Joe Genteel (#6) has been calling the shots at quarterback, but he was seemingly injured early in the game two weeks ago against Southern Lehigh.  Genteel, a junior listed at 5’11”, 150, comes at you more as a dual threat guy.  He looks comfortable running and scrambling as well as taking shots down the field in the passing game.  In relief of Genteel is junior, Rein Farensbach (#4).  Farensbach goes 5’7″, 140 and, despite his size, is more of a pocket passer.  Last week, in a 41-13 loss to Northwestern,  Farensbach completed 13 of 29 passes for 165 yards.  That was good for 2 TD’s and an interception.  Genteel has connected on 20 of 31 throws for 431 yards.  This includes 4 TD’s and six interceptions. After five games, the Slater quarterbacks have combined to complete 36 of 73 passes for 646 yards.  This includes 6 touchdowns and 10 interceptions.  It is a possibility, but the safe bet is that Genteel will not play against the Panthers.

The Slaters have struggled so far this season to run the ball with consistency.  As a sophomore, Kael Godshalk (#26) leads the Bangor runners with 59 carries for 214 yards.  Godshalk did get out of the gates quickly in Week One against winless Catasauqua with 16 carries for 136 yards.  But, since then he has slowed dramatically and is struggling to maintain a 2-yard per carry average.  Godshalk looks more quick than fast, but he seems to lack the size and power to put any serious fear into Colonial League defenders. Genteel is next on the stat sheet for the Slater rushers with 36 carries for 43 yards. On the season, Faransbach has tallied 13 carries for 24 yards. Last week, he was credited with seven carries for -5 yards against the Tigers.  The Panther defense should have an advantage against Bangor’s running game.

Senior Nick Davanzo (#19) is a Slater to keep and eye on. Davanzo measures 5’11”, 180 and is a playmaker who has 20 catches for 414 yards. At 20.7 yards per catch and 5 TD’s the Panther defensive backs should be well-aware of his presence. Joining Davanzo as a Slater pass-catcher is classmate Nathan Owens. Owens only has nine grabs so far, but he too averages almost 20 yards per grab. In addition, Owens is listed at 6’3”, 170. Bangor has a couple of quality receivers to throw to if Farensbach or Genteel have time and the protection holds up.

The key matchup appears to be whether Saucon Valley’s defense can limit Bangor’s aerial attack.  The Panthers struggled against “Air-Salisbury” Week Three, but Bangor does not have the explosive receivers and elusive QB like Salisbury.   In addition, the potent Panther rushing attack is averaging 7.2 yards per carry. Saucon Valley’s ground-and-pound is tough to stop.

Homecoming night against Bangor figures to be no easy task for the Saucon Valley Panthers. Nonetheless, It is going to be a great night for high school football!