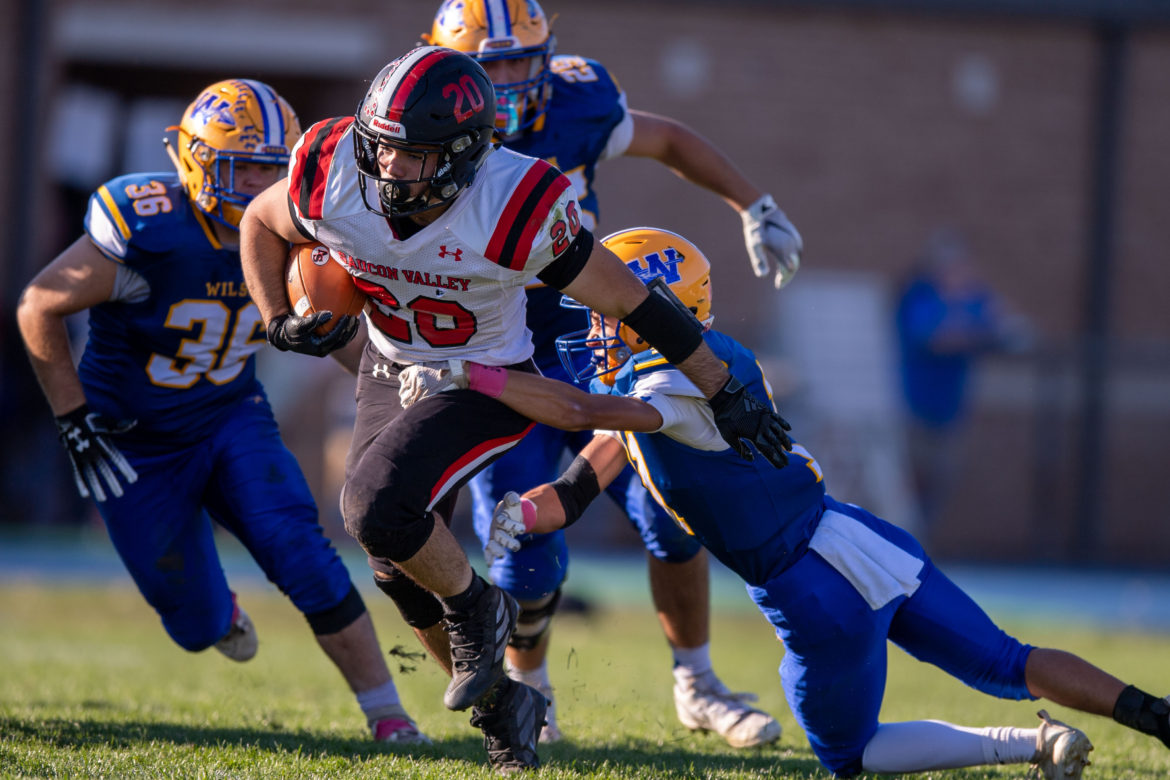 Braydyn Lugardo (#20) scored three touchdowns for the Panthers against the Wilson Warriors.

The Panther football program has been making a living lately living on the edge.  The past two weeks Saucon Valley was able to hold on for victory in a couple of tight games.  Saucon survived to hold off the Northern Lehigh Bulldogs two weeks ago.  Last week, the Panthers had to rally late to secure a homecoming victory against the Bangor Slaters.  Saturday at Wilson, it was the Warriors that supplied the late game heroics in a very competitive battle.

The Panthers started with the football but were held to a three-and-out.  After a short punt from deep in Panther territory, the Warriors took possession.  Seven plays later and facing a 4th & 14, Wilson sophomore quarterback Cayden Stem dropped back and found Zack Gillen on a post-route for a 24-yard touchdown pass.  Lorenzo Sigue’s extra-point missed its mark and with 6:05 to go in the opening quarter Wilson took a 6-0 lead. 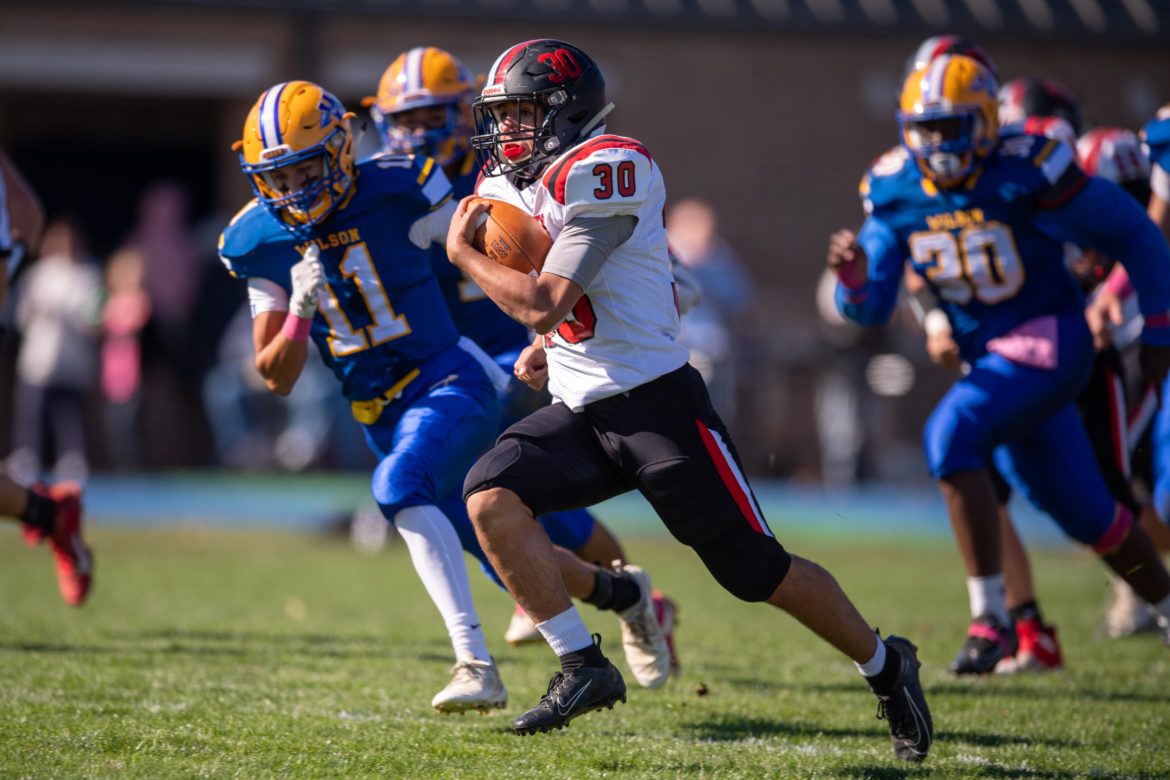 Damian Garcia blasted off for a big gain early in the game.

The Panthers roared right back on their very first play from scrimmage when Saucon sophomore Damian Garcia popped the right side of the Warrior defense with a 57-yard run down to Wilson’s 9-yardline.  Two plays later Braydyn Lugardo pounded the ball in for a score.  The Panther PAT was blocked and with 4:50 remaining in the first quarter the score was knotted at 6-6.

Nick Warnke stepped up for the Panther defense on the next series.  After knifing into the Warrior backfield and hitting the Wilson quarterback as he pitched the ball, the Saucon senior pounced on the fumble in the Warrior backfield to steal back possession for the Panthers.  Warnke’s hard work gave Saucon Valley a short field.  Eight snaps later Lugardo found the endzone from five yards out.  The Panthers attempt at a 2-point try was unsuccessful. At the end of the 1st quarter Saucon took a 12-6 lead. 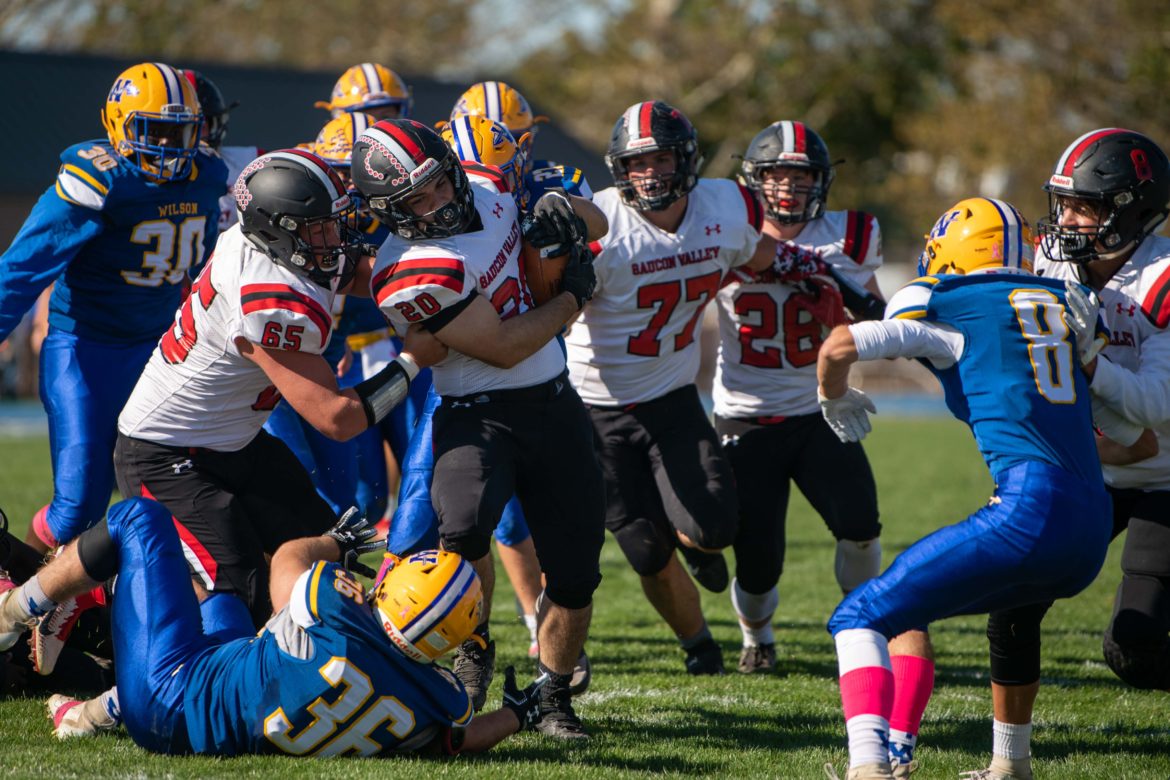 Wilson bounced back early in the second quarter with an 8-play drive that covered eighty yards.  The Warriors scored on a quarterback sneak that was good from the six yardline.  Sigue’s PAT was good and with 9:50 left in the first half Wilson claimed a 13-12 lead.

Starting from their own 35-yardline to start their next offensive possession, the Panthers roared right back.  After a 10-yard blast out to midfield, Braydyn Lugardo then powered his way to paydirt once again.  Lugardo’s 48-yard touchdown run followed by his 2-point conversion on a short toss closed out the first-half scoring with the Panthers holding a 20-13.

The Warriors opted to receive the second-half kickoff and pieced together a 10-play scoring drive that ended with a big play.  On 2nd & 10 from the Panther 40-yardline Cayden Stem hooked up on a bomb with Dylan Goldsworth down the sideline for a 40-yard touchdown pass.  Sigue connected on the extra-point and the 20-20 score would stand into the fourth quarter.

Both teams traded punts down the stretch leading to a Warrior march that started from their own 20-yardline.  Looking for more points, Wilson moved the ball to the Panther 30-yardline.  However,  the Panther defense proved stingy. On 3rd & 10, Stem rolled to his left looking to throw for a first down.  The Panthers brought pressure and Dale Sorensen from his defensive end position got a piece of Stem just as he threw.  The ball popped straight up into the air and fell into Evan Deily’s arms as he was also bearing down on the Warrior quarterback.  Deily returned the ball out to near midfield to put the Panther offense back in business. 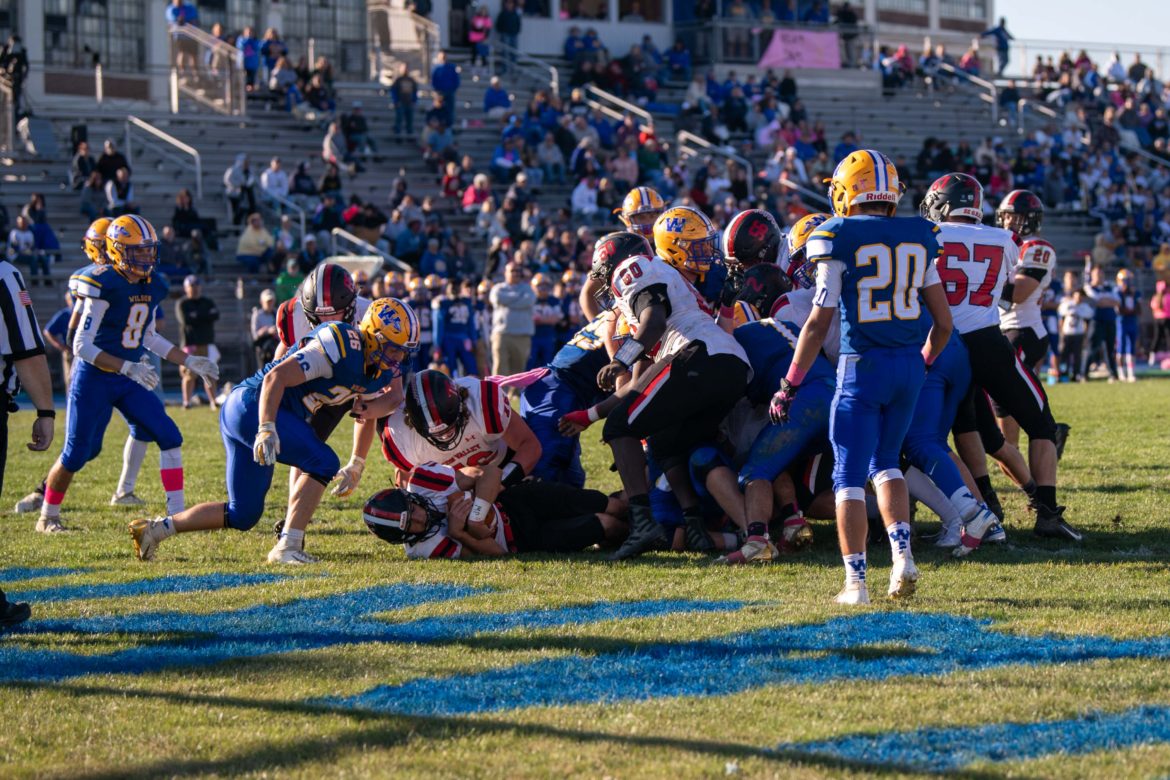 Dante Mahaffey crosses into the end zone for a score.

After nine plays, Saucon Valley was able to capitalize on the Wilson turnover with Dante Mahaffey’s quarterback sneak for a touchdown.  However, the Panthers could not convert the PAT.  With 5:53 left in the game, Saucon reclaimed the lead at 26-20.

Wilson’s Stem brought the Warriors right back.  Completing 5 of 6 passes during his next series the Wilson sophomore led his team on a drive that started at their own 28-yardline.  The Warriors scored to even the game on a 13-yard dart to classmate Zack Gillen with 2:34 left in the game.  Sigue’s extra-point, however, was blocked when Dante Mahaffey screamed off left end of the Warrior line and fully laid out to snuff the kick. 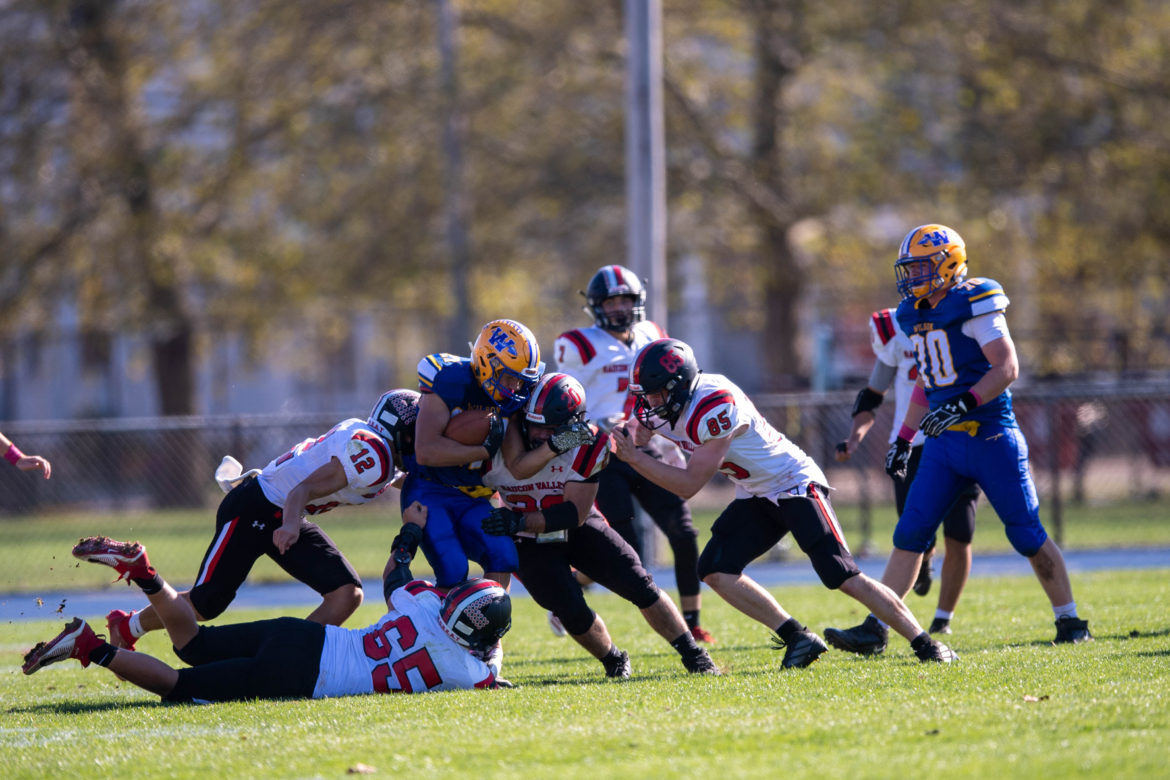 The Panther defense trying to slow down the Warrior offense.

Sigue’s ensuing kickoff bounced through the endzone and Saucon, once again, had opportunity from their own 20-yardline to come up big in dramatic fashion.  After picking up a first down, a bobbled snap ended in disaster for the Panthers.  Wilson recovered the fumble at the 30-yardline with just under two minutes to go.

After the Wilson advanced to the Panther 15-yardline, the Warriors lined up for a 32-yard field goal attempt.  The Panthers, however, jumped the gun with their block attempt and were hit with an offside penalty.  The teams line up again and with only ten ticks left on the game clock, the Warrior protection held as Sigue nailed a 27-yard game-winning field goal.  In another nailbiter, it was the Wilson Warriors defeating Saucon Valley 29-26 in the closing seconds of action.  The Panthers fell to a 5-2 record while the Warriors improved to 4-3. 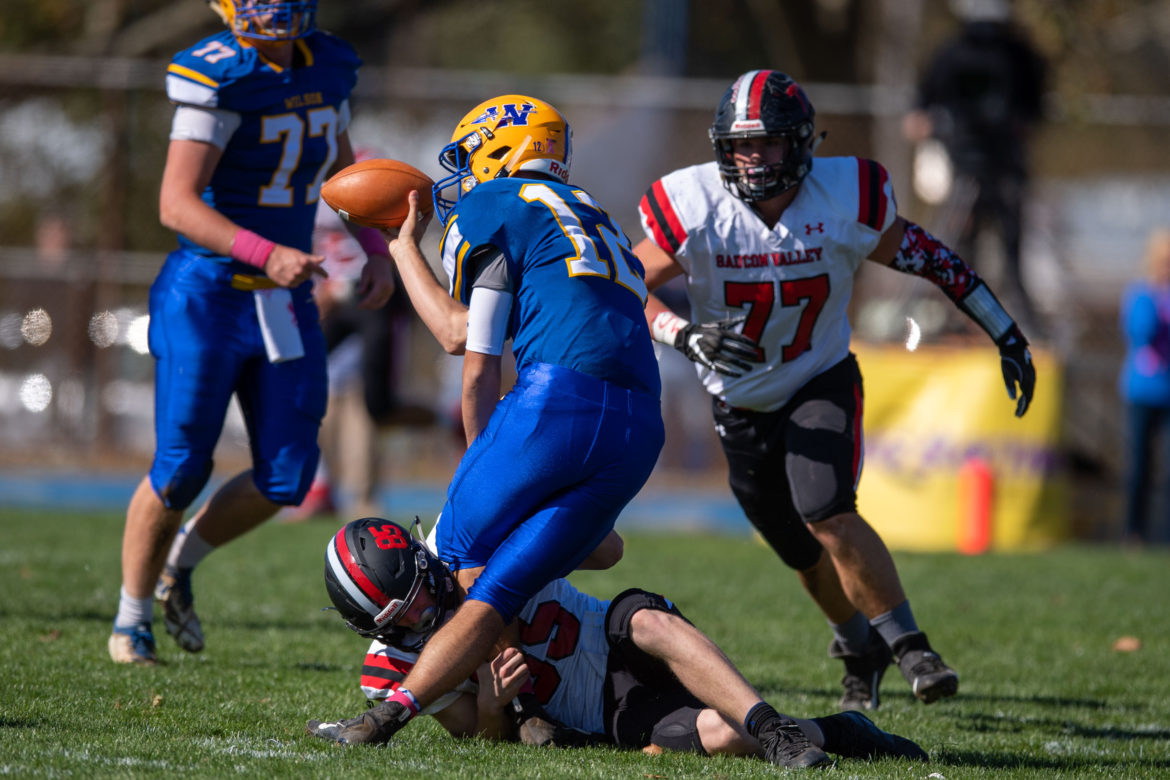 The Panthers were close, but could not come up with the victory. 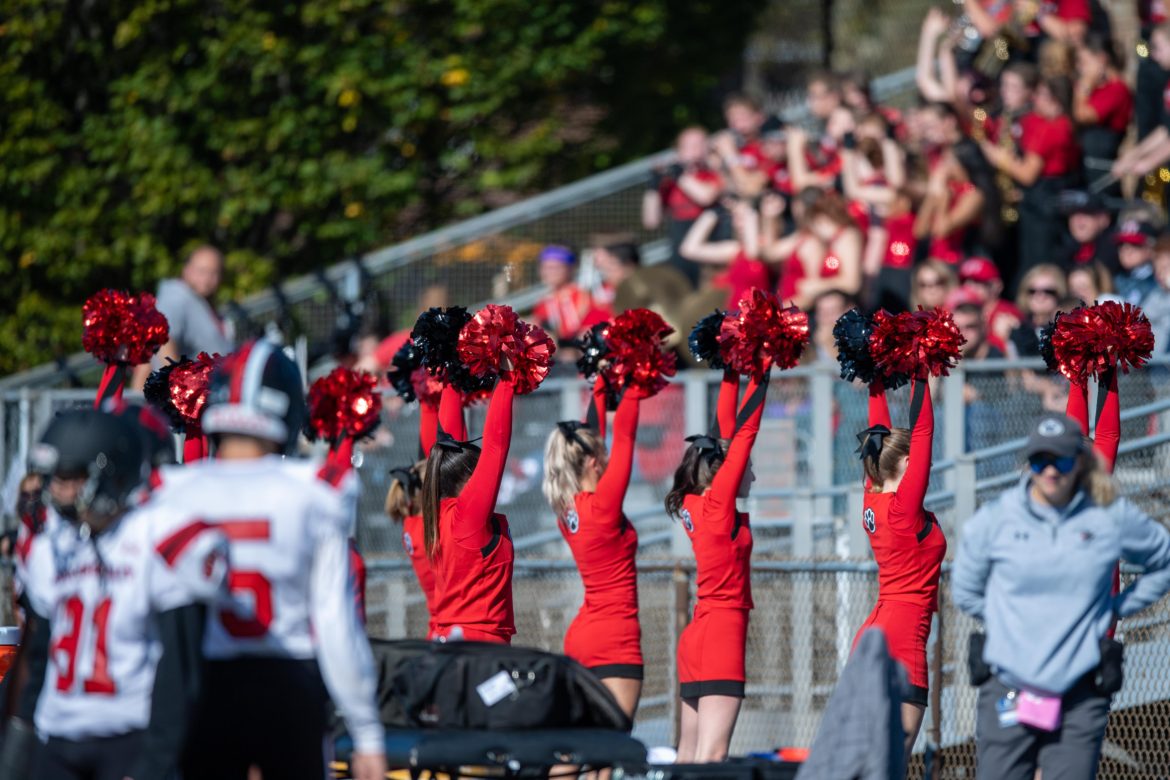 The Panther spirits were kept high in the face of defeat.

Up Next: Saucon Valley (5-2) will travel to Northwestern Lehigh (6-1) for another tough football fight. Wilson (4-3) will take their show on the road to Palmerton (2-5). Kickoff for both games is scheduled for Friday at 7 p.m. 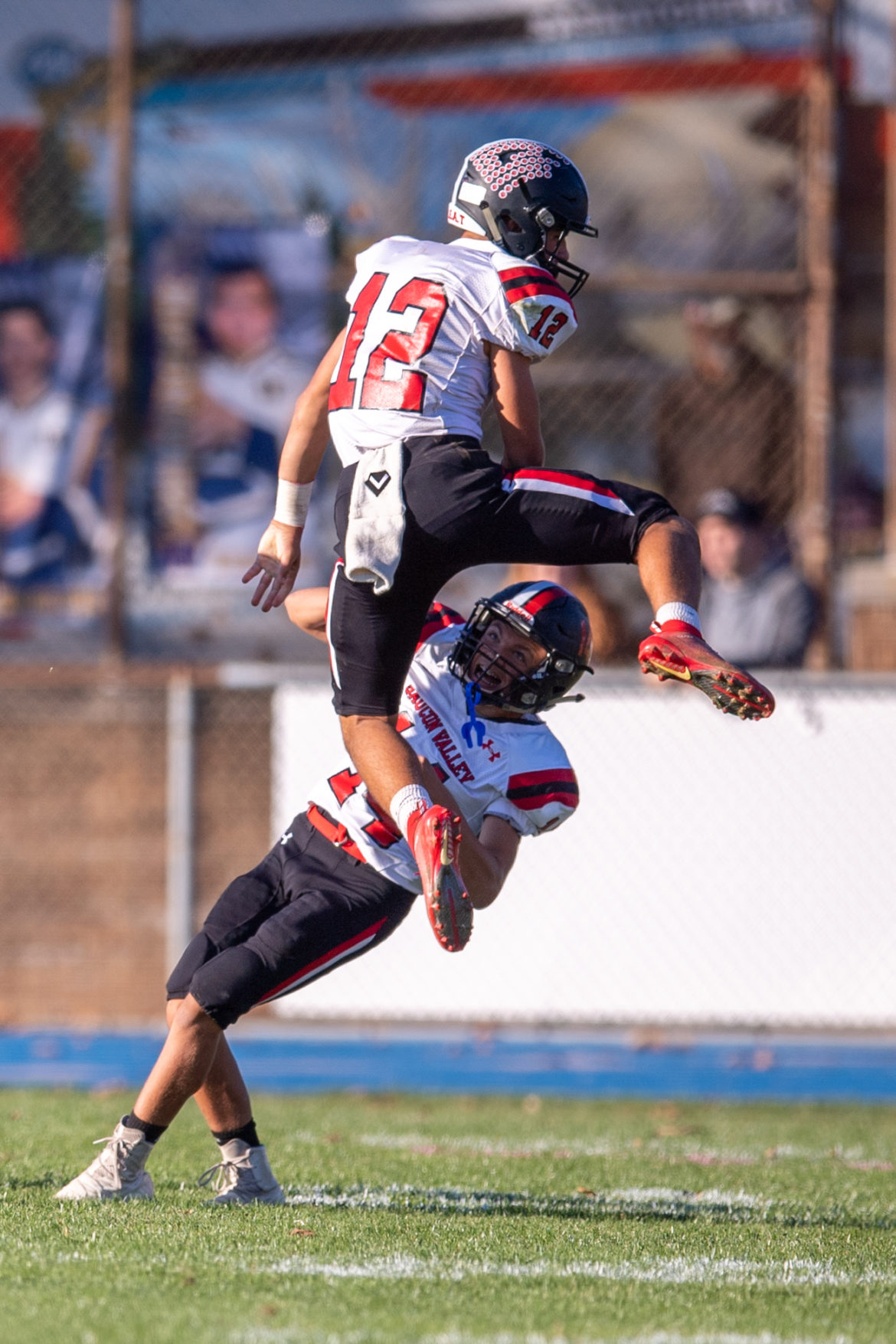 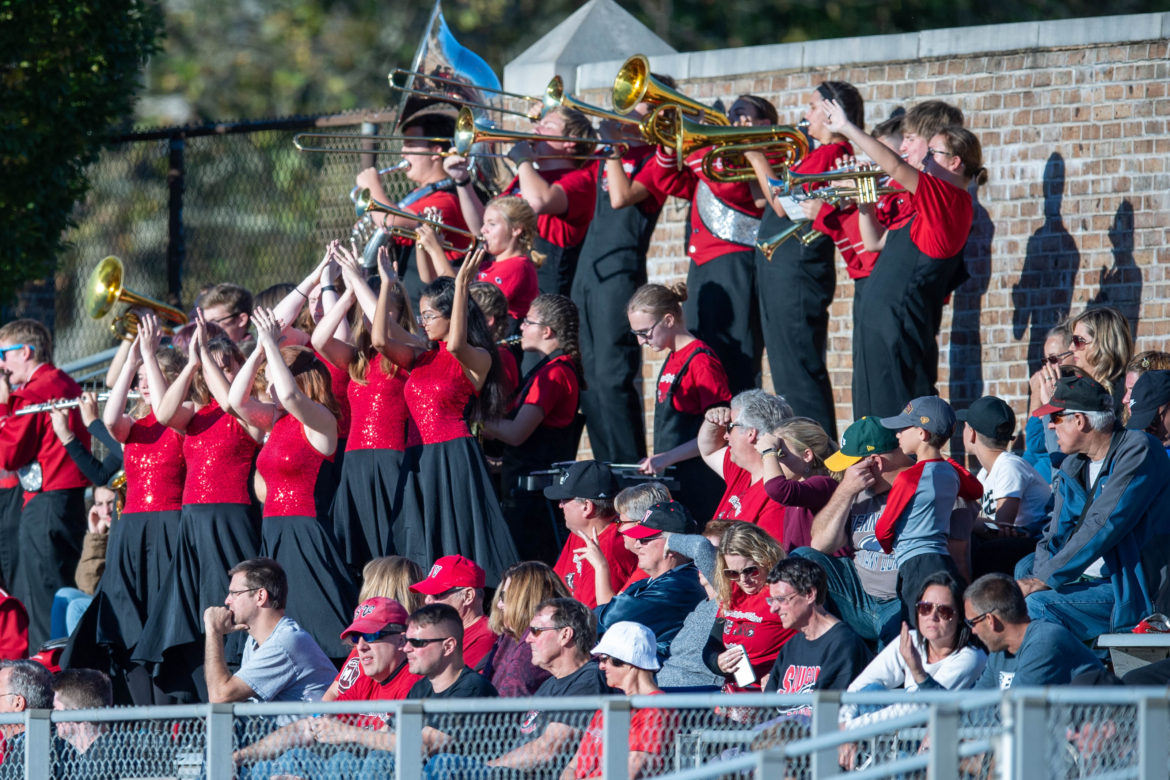 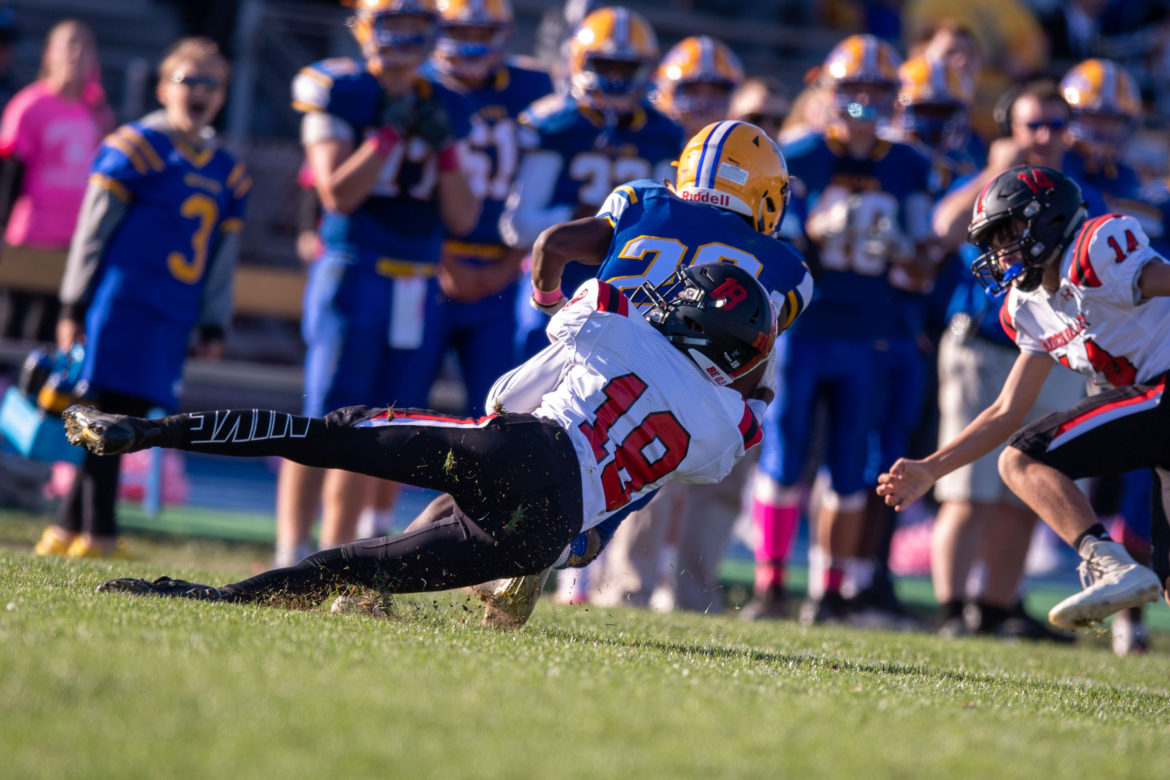 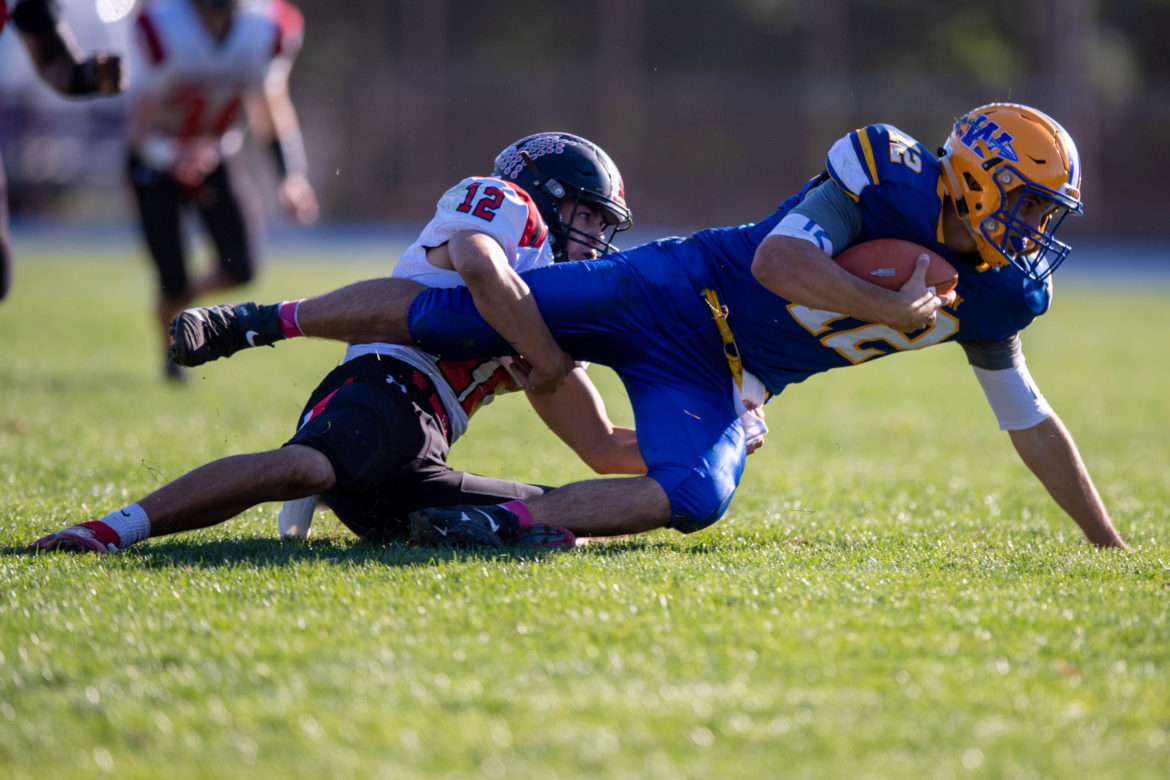 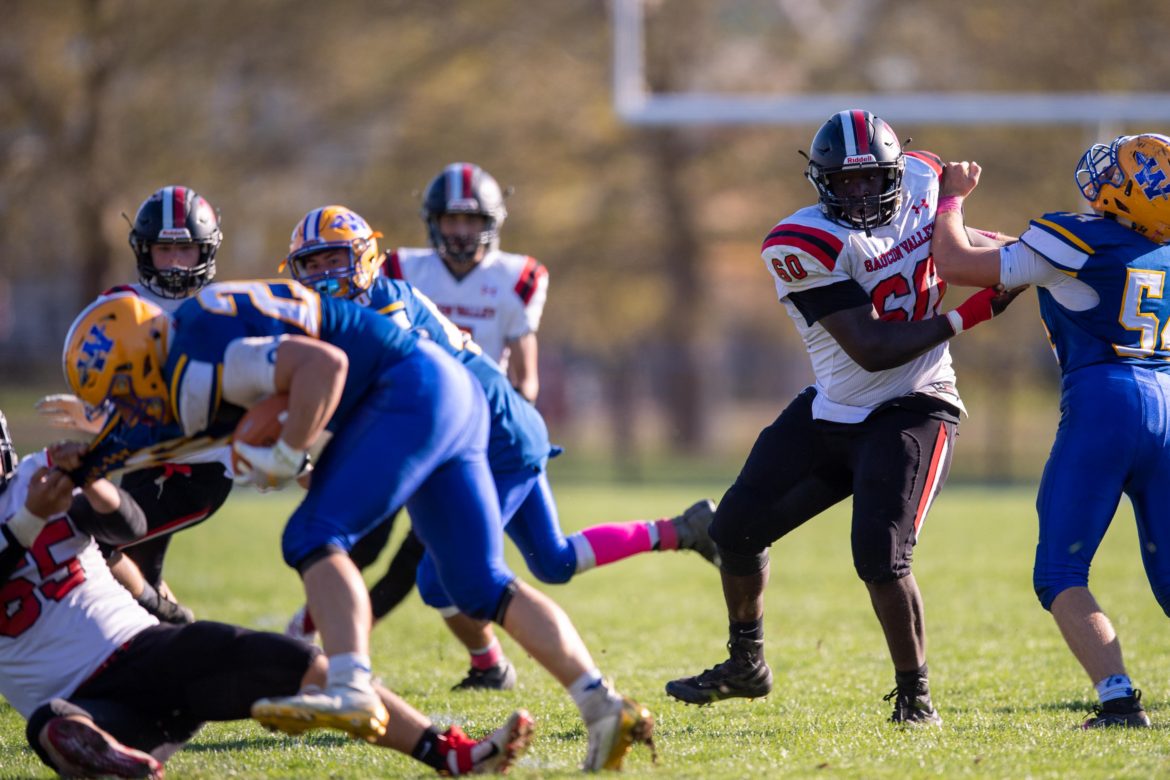 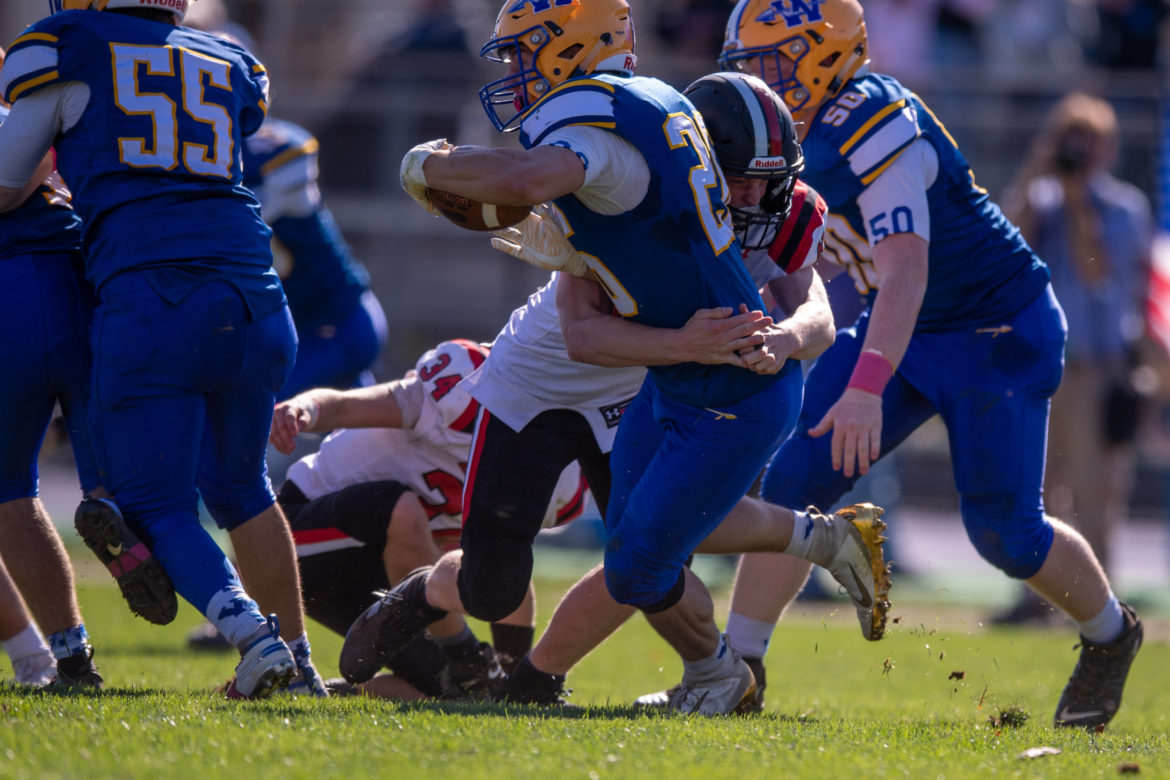 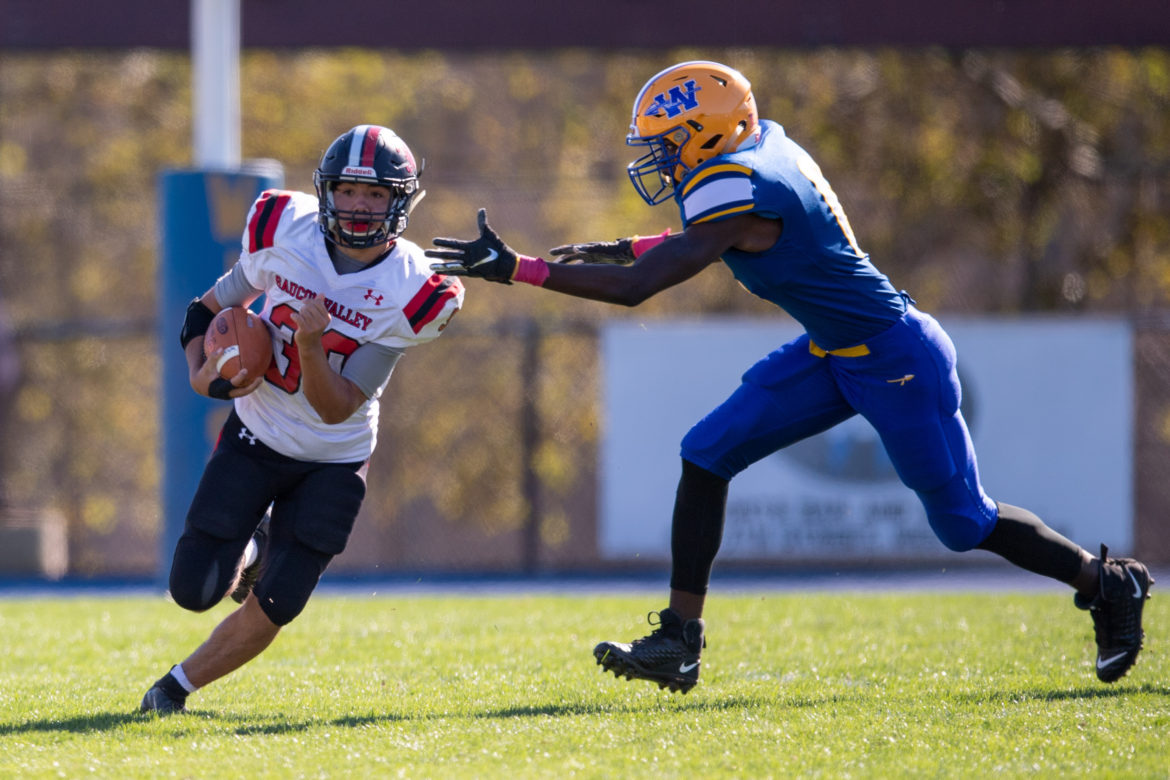 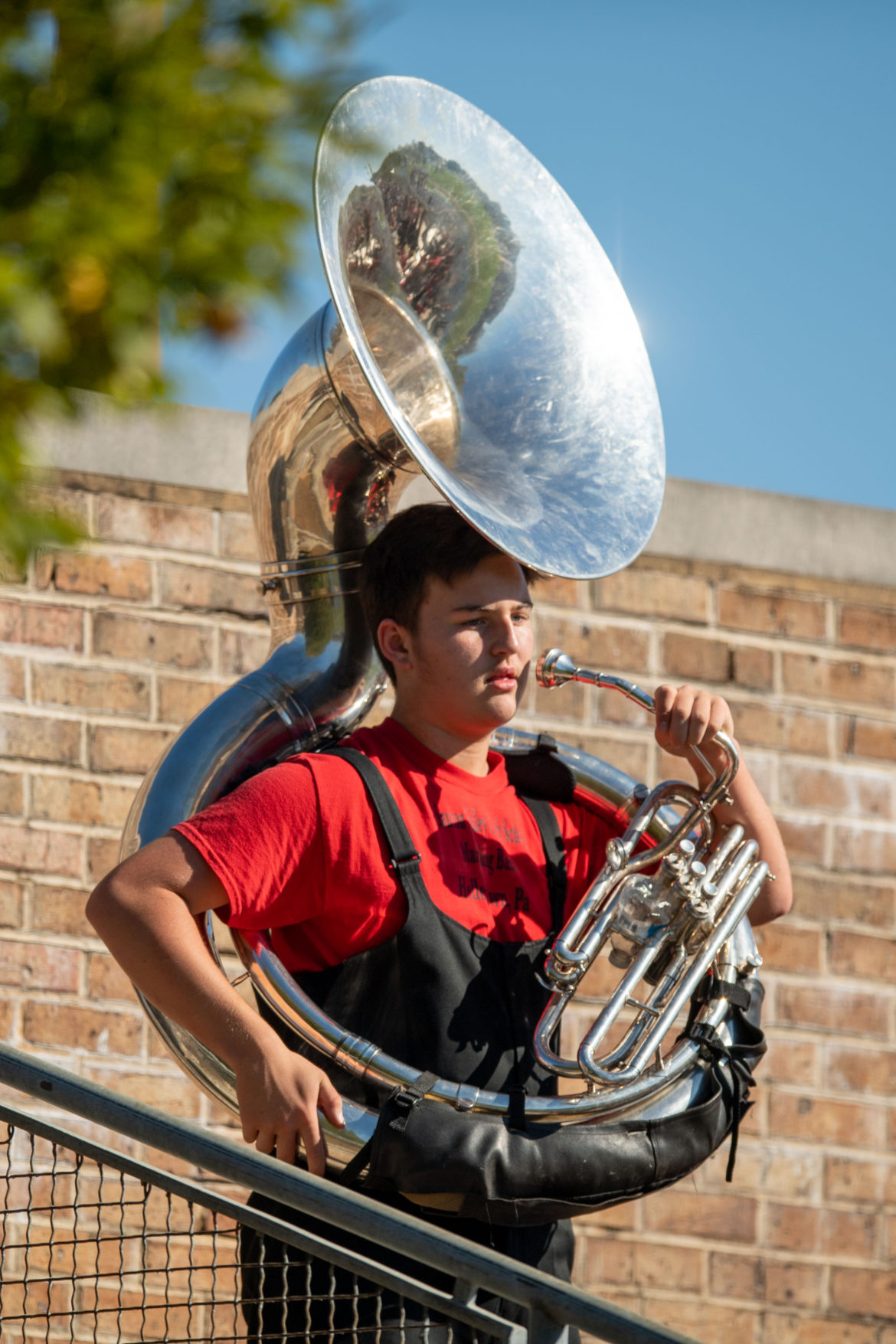 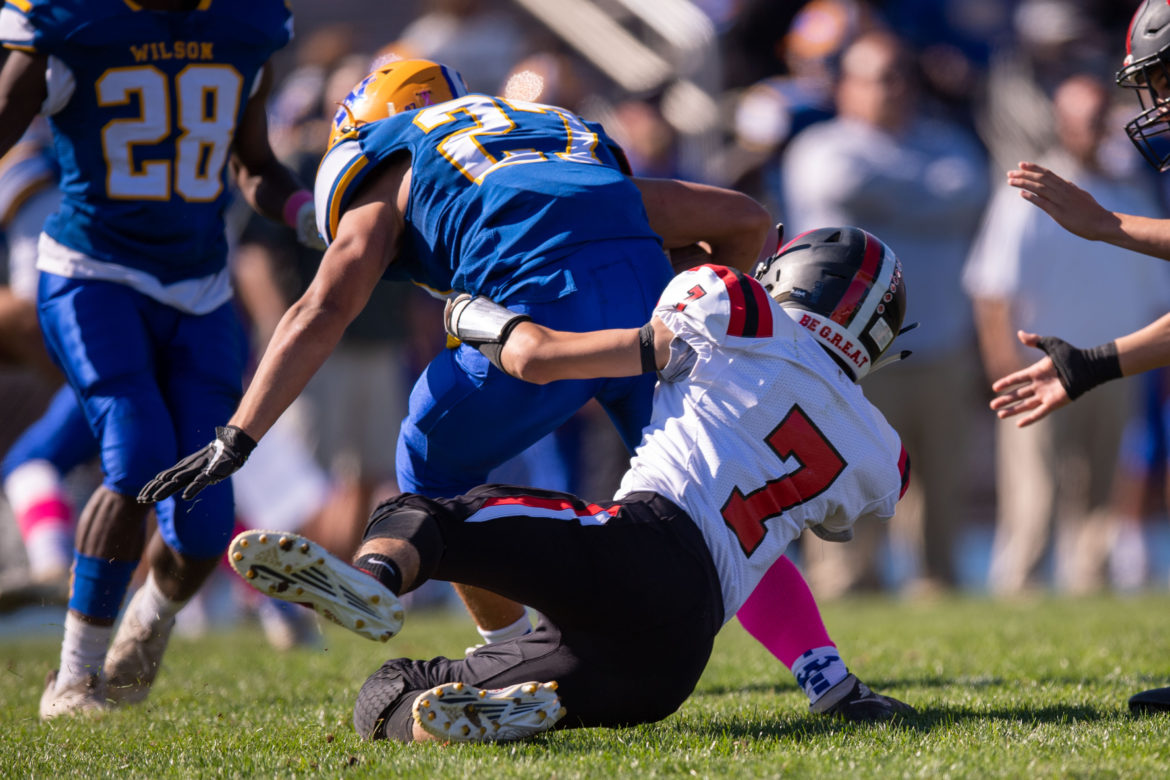 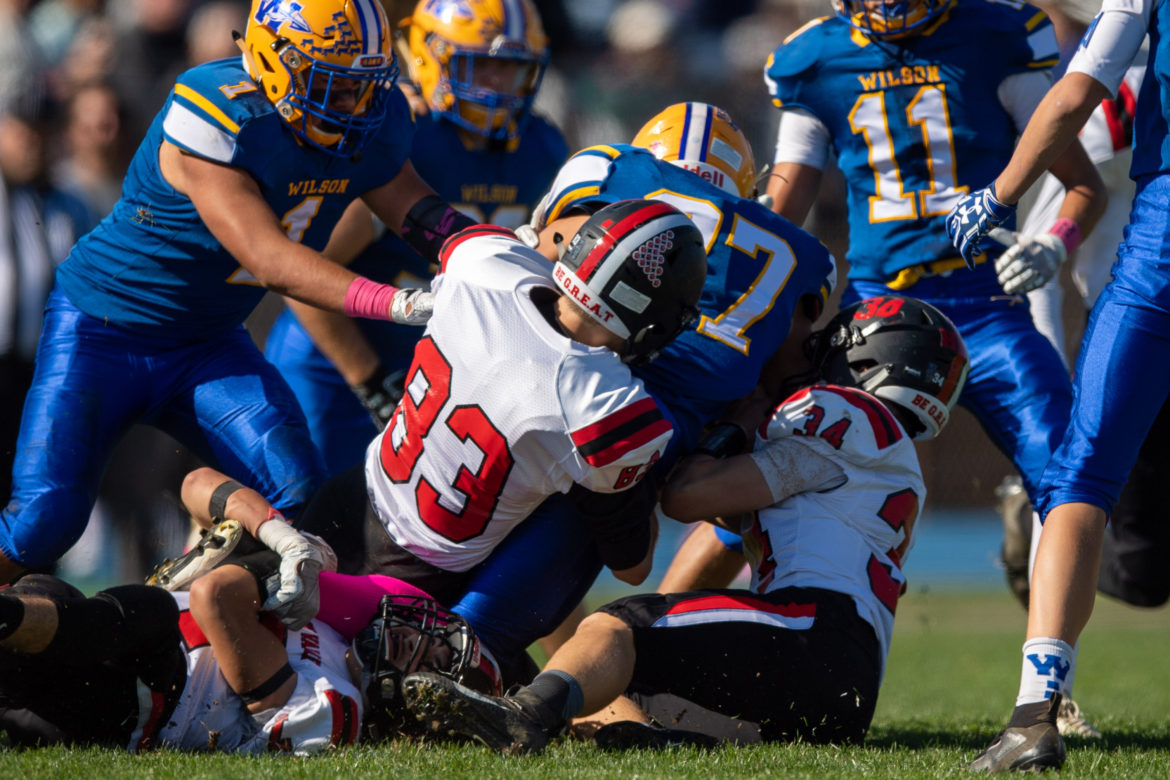 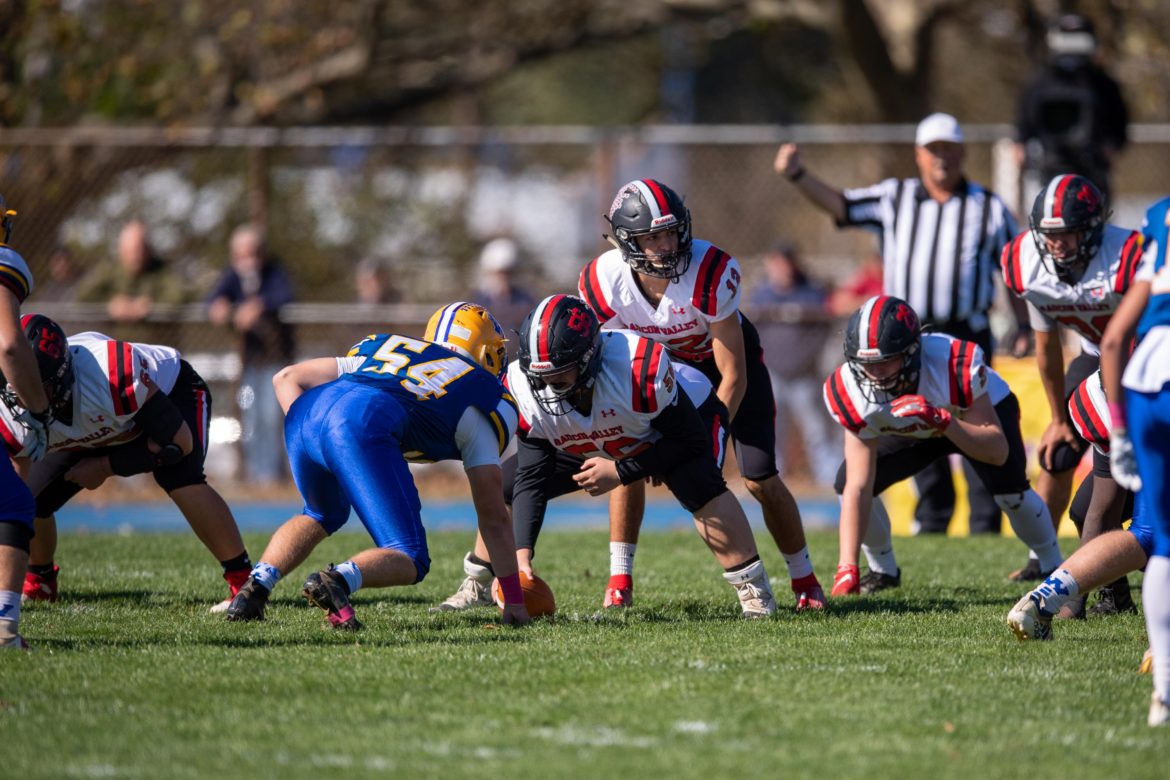 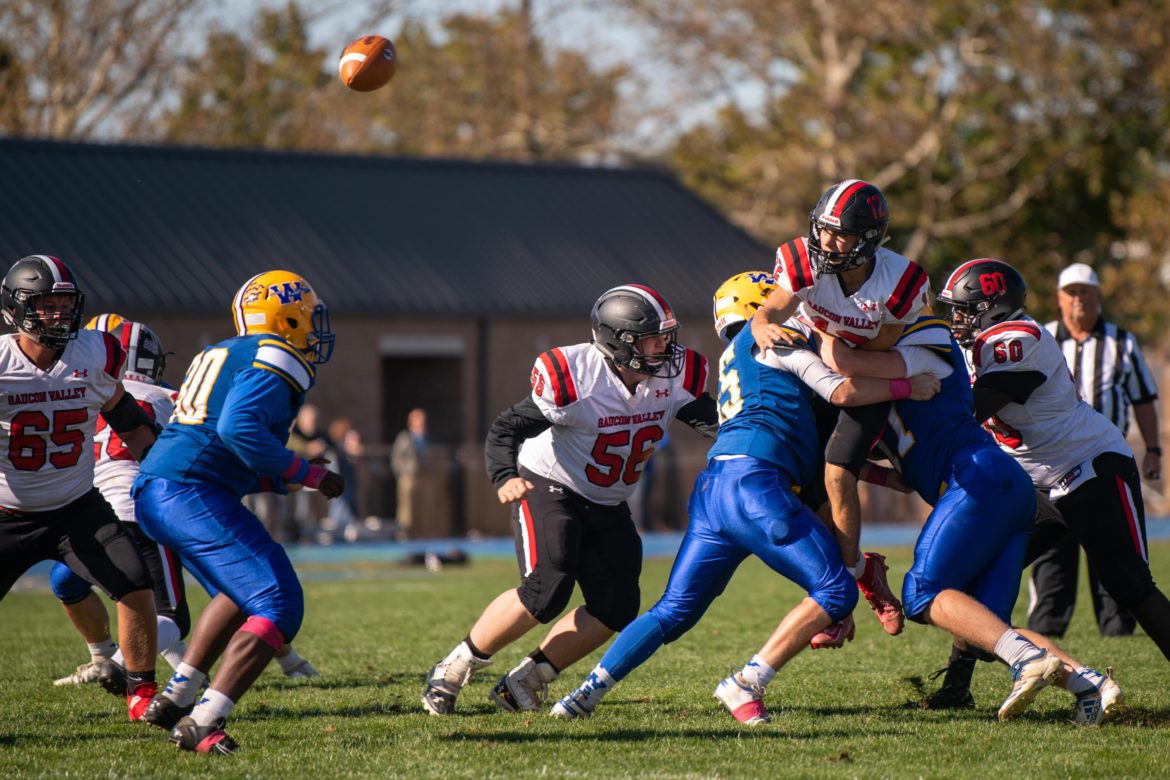 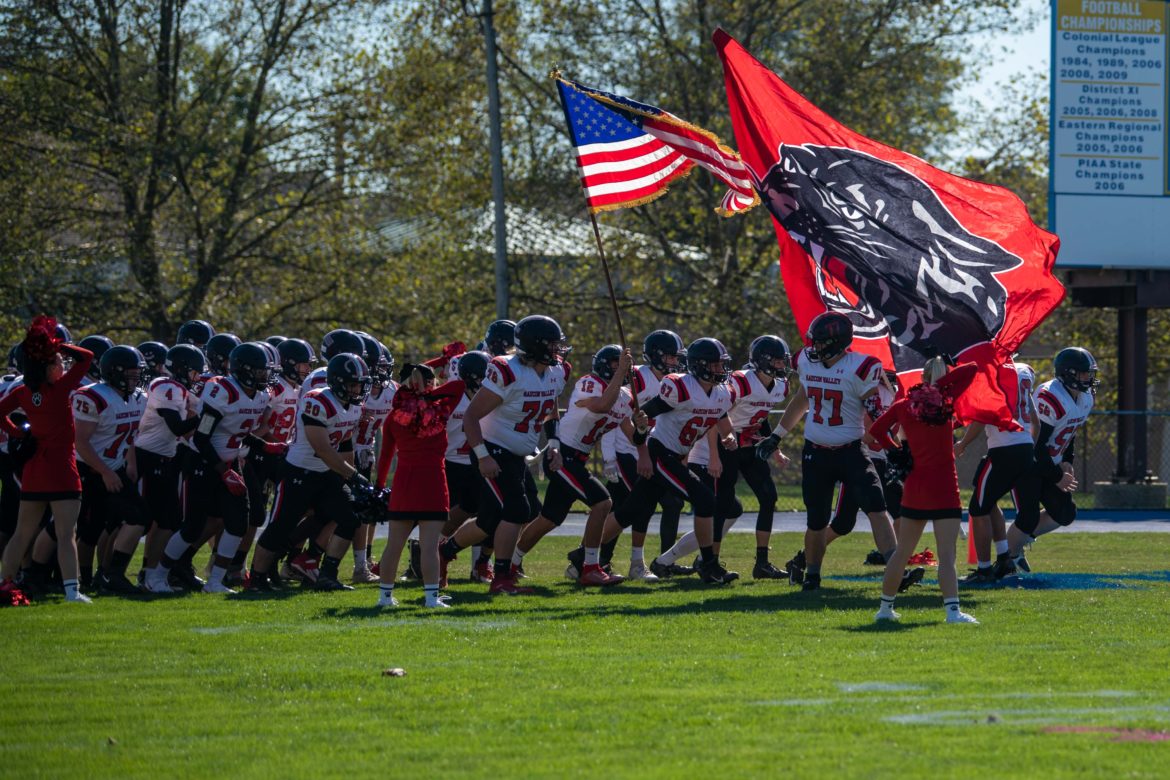